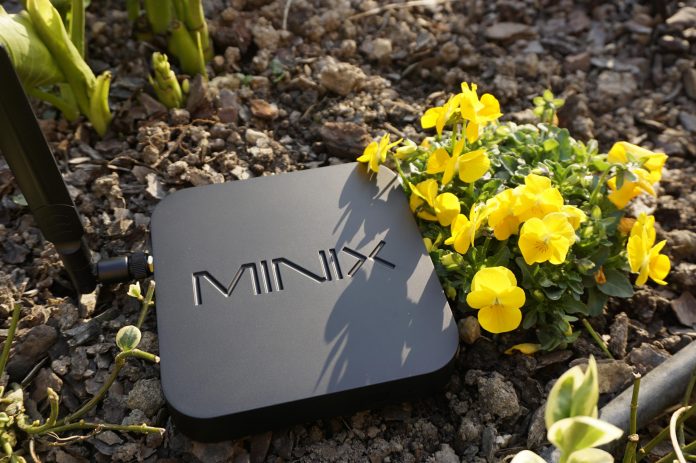 The sales package of the Minix Neo U9-H It is made of excellent black cardboard with some writing and graphic effects of different colors.

In the back we find the complete specifications of the device, as well as inside, where, in addition to the Neo U9-H, we find a small infrared remote control, an HDMI cable, the power supply, a OTG cable, a USB-microUSB, a user manual and finally theexternal WiFI antenna to be installed on the device.

A complete endowment that offers everything you need to use the product without having to face additional expenses.

The technical specifications of the Minix Neo U9-H provide a processor AmLogic S912, for an octa-core ARM Cortex-A53 with bigLITTLE architecture, with a maximum clock from 2.0 GHz e Mali-820 MP3 GPU. The installed GPU is capable of supporting the 4K resolution to 60 fps with codecs H265 to 10 bit el 'HDR10, always at 60 fps. 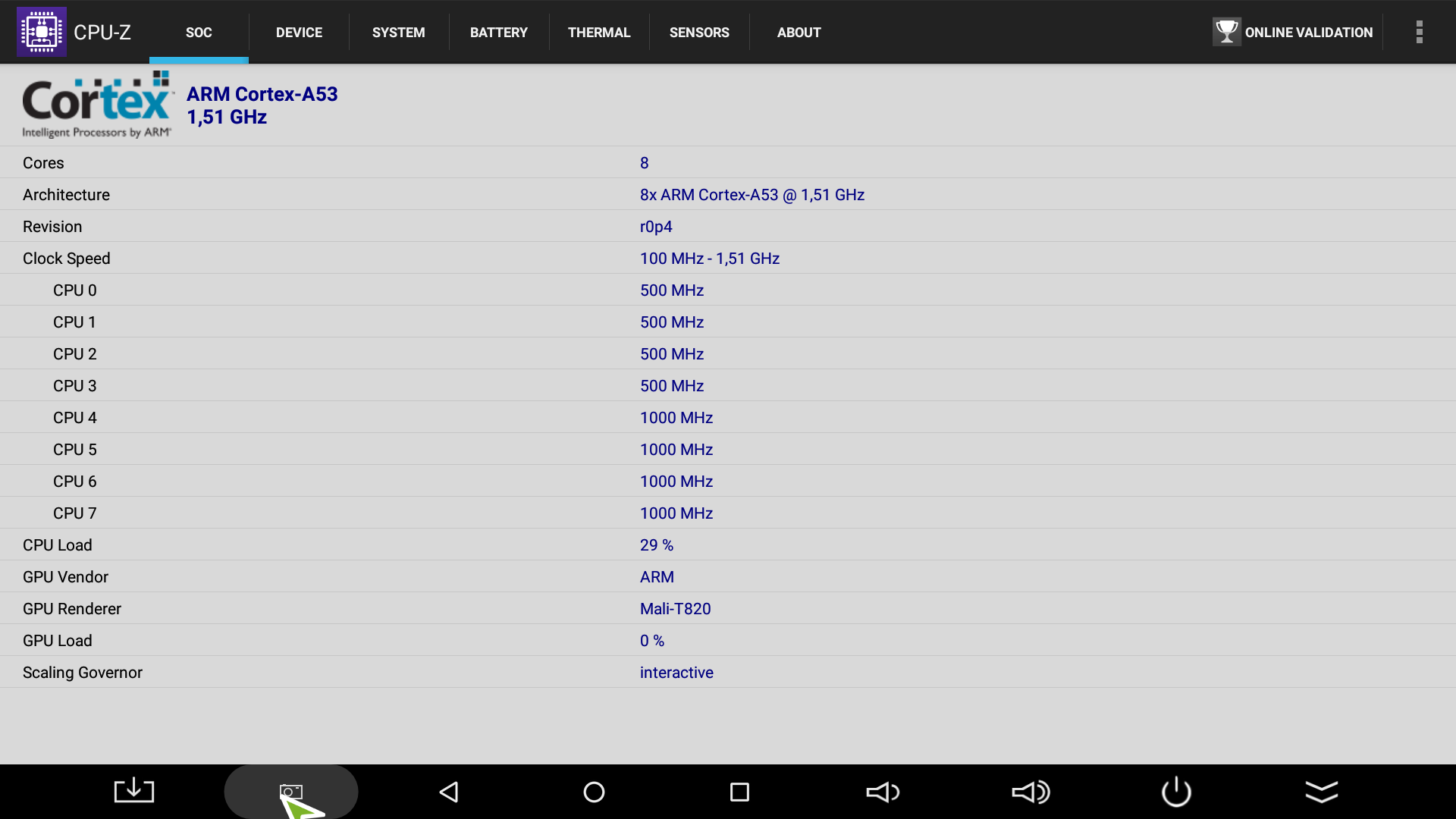 Present then 2 GB of DDR3 RAM memory e 16 GB of internal storage XMMUM eMMC expandable via microSD, in addition to the MiMo Dual Band WiFi to 2.4 and 5 GHz with external antenna, a door Gigabit Ethernet, Well 3 full-size 2.0 USB ports, an exit Optical Audio (SPDIF), a door Micro USB with OTG support and Bluetooth 4.1. The dimensions of the body are of 127 x 127 x 22 millimeters thick, while the weight is of 278 grams. 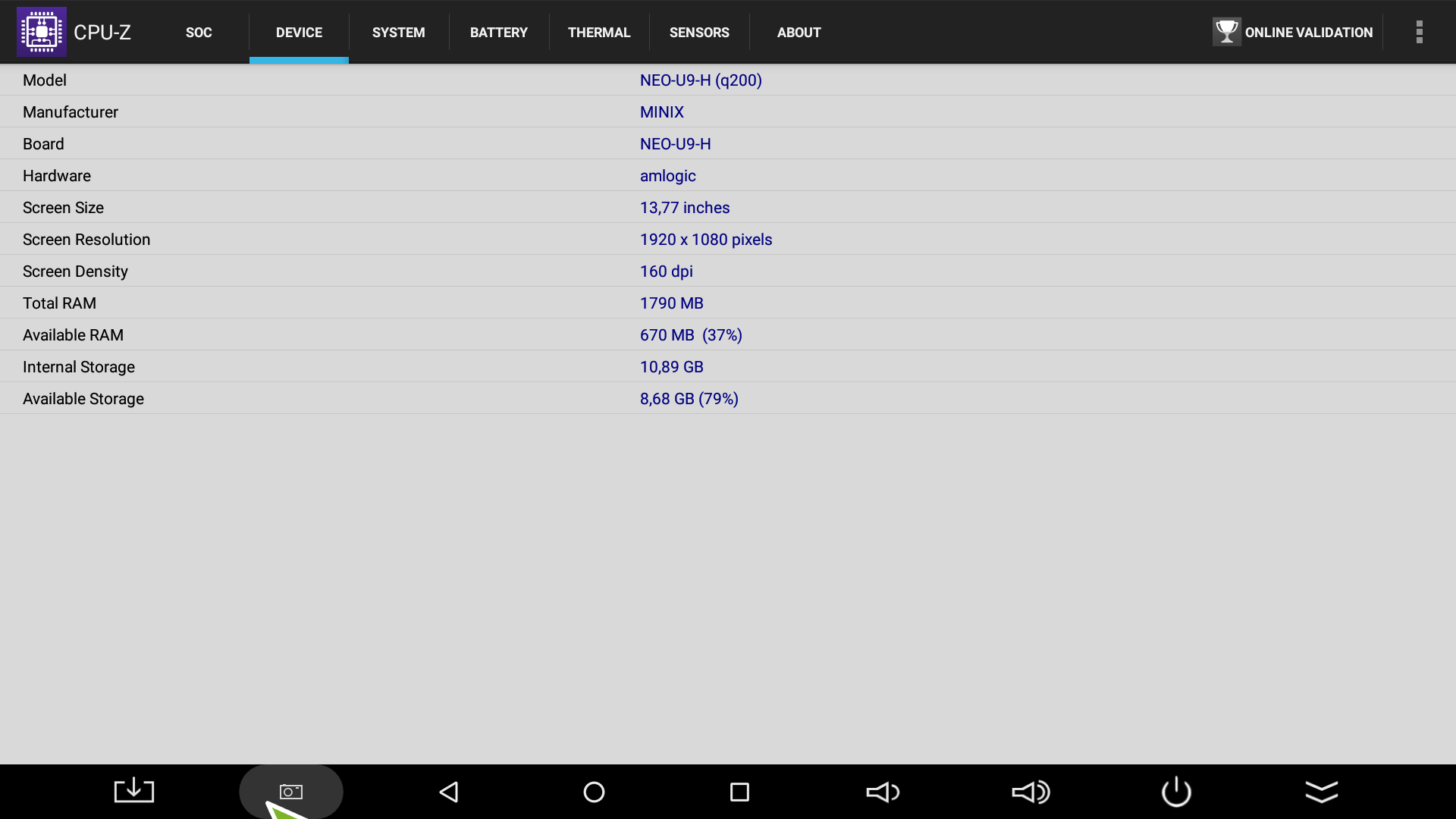 Finally, we find the two connectors from 3.5 millimeters both for the microphone and for the headphones, the Kensington lock, for an IR receiver, a HDMI 2.0 port and the Android operating system in the version 6.0.1 MarshMallow.

The body of the Minix Neo U9-H it's the same identical to many other Minix products that we have already had the opportunity to try, needless to say, therefore, that it is really well done, both in terms of size and dimensions, both in terms of the plastics used, which appear to be of a high standard in every point of the frame.

At the top we find the Minix logo, while in the lower one the Android one. On the front profile we find the IR receiver and a small green / blue status LED, in the right one we have the Power button, three 2.0 USB ports, the slot for the micro SD and micro USB port.

In the back, however, there are the HDMI connectors, SPDF, RJ45 Ethernet and the auxiliary power outlet. Finally, on the left side, there is only the connector for theexternal Wi-Fi antenna.

Worth noting is the presence of four excellent rubber feet which improve the stability of the device and allow air to circulate in the lower part of the body. 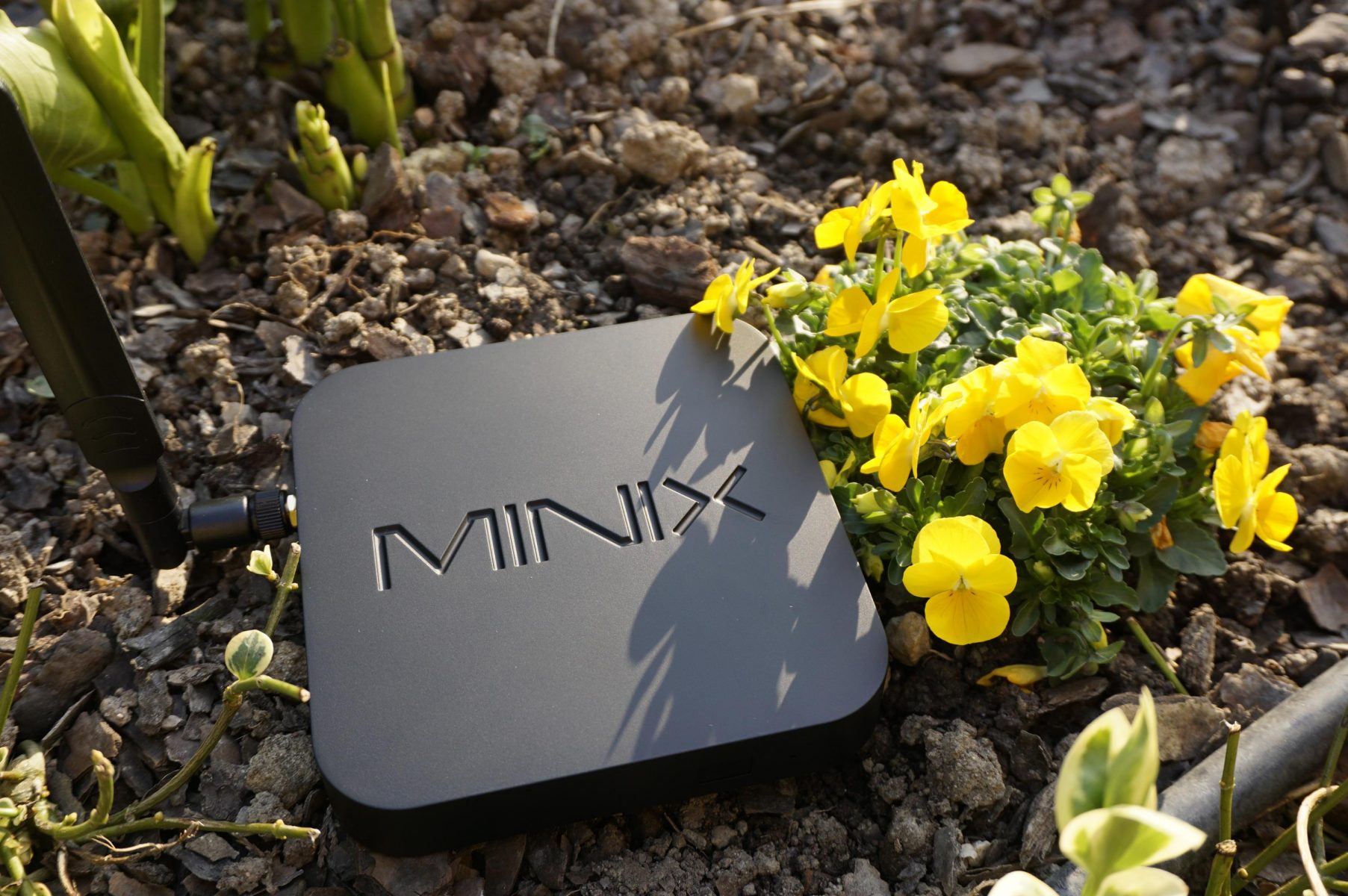 The design is really very pleasant, certainly thanks to the small size and excellent construction of the body.

The power supply is quite compact, as well as having a classic circular power connector an 3A output to 5V, while the included remote control allows a basic and often use poco optimal device, since there are no integrated accelerometers and microphones.

The services offered by SoC AmLogic S912 they are certainly not of the highest level and this is also evidenced by the results returned by the various tests and benchmarks, which place the device in the mid-range in terms of performance.

In terms of fluidity and reactivity, the system has always proved to be quite ready for use in almost every situation, even in the most extreme multitasking, although every now and then, I would rarely say, it happens to run into some lag or occasional stumbling in the transition from a activity to the other.

Excellent reception of Wi-Fi, which has always managed to hook the signal very strongly and to ensure the excellent transfer rates and response times, both on the 2.4 GHz and the 5 GHz. For example, there are no problems during the streaming from a network NAS of some very heavy films with very high bitrates. The same applies to the installed GigaBit Ethernet port, which is able to guarantee a very high bandwidth.

As for the graphic sector, the Mali GPU 820Mp3 it has performed well even in the main games, succeeding in guaranteeing a good playability in almost all the tested titles (Asphalt 8 Airborne), at least at a Full HD resolution.

Finally, the XMMUM eMMC memory installed has proved quite fast but far from the best performing models, since it has stopped at about 120 MB / s in reading a poco less than 50 MB / s in writing, two values ​​that are not exceptional but more than enough to guarantee a quick start of the Apps and the system. 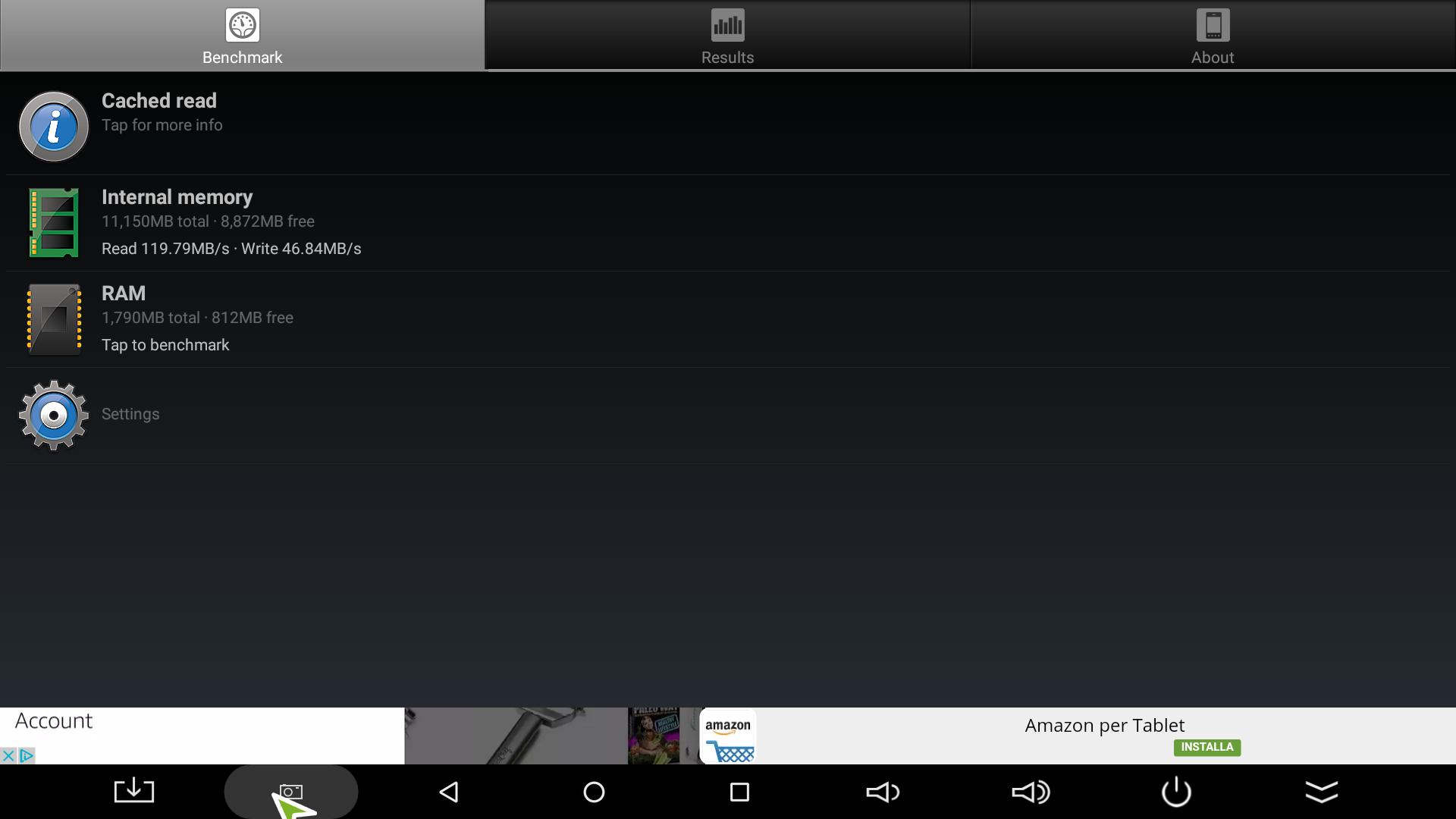 Thermal management is also excellent both in gaming and in daily use. The temperatures recorded on the body, more precisely in the upper part, turned out to be poco above 30 ° C with a basic use, such as web browsing or video playback, while playing you also get to 45 / 46 ° C, values ​​more than acceptable for this type of product, since it should not be kept in hand.

Speaking of consumption, the values ​​recorded in stand-by are approximately 1 Watt, while in everyday use they are around between the 3 and the 4 Watt, until reaching values ​​around i 8 / 9 Watt during gaming and the most demanding activities.

Excellent presence of Kodi (17 Krypton) pre-installed, which on all Tv Box Minix is present in a version Custom (XBMC Minix Edition), created in collaboration between the two companies. No problem with video playback either in 4K that Full HD with H.265 and H.264 codecs, even with the heaviest ones, which are reproduced without interruption.

Only with some videos in 4K at 60 fps very heavy there are uncertainties in terms of the fluidity of reproduction, uncertainties perhaps due to some firmware problem, since the SoC should support this framerate. Even with theHDR you do not have problems, at least in my two video samples I did not have any reproduction problem.

Interesting option to automatically activate or not the HDR depending on the occurrence, as well asHDMI CEC, a technology that adjusts the output framerate according to the specifications of the media being played and, in addition, it is also possible to set the device to turn on automatically. Finally, there is also the Real Time Clock functionality (RTC) can always be activated via a special option in the settings panel.

Among the various pre-installed system apps we also find Netflix, which, however, after having carried out some tests, has proved capable of supporting only the lowest resolutions (SD), therefore no streaming in 4K and Full HD, a limitation due to the policies of Netflix same. However reading between the forums I read of a version of the application of Netflix amended by Minix itself able to allow the vision of contents also in HD. Unfortunately I could not try directly SkyGo, but reading on the net several users report that it is fully functional.

The graphical interface of the Minix Neo U9-H is dominated by the company's own launcher and the respective GUI (MinixUI), which incorporates the style of Android TV, especially as regards the menus and the layout of the graphic elements. 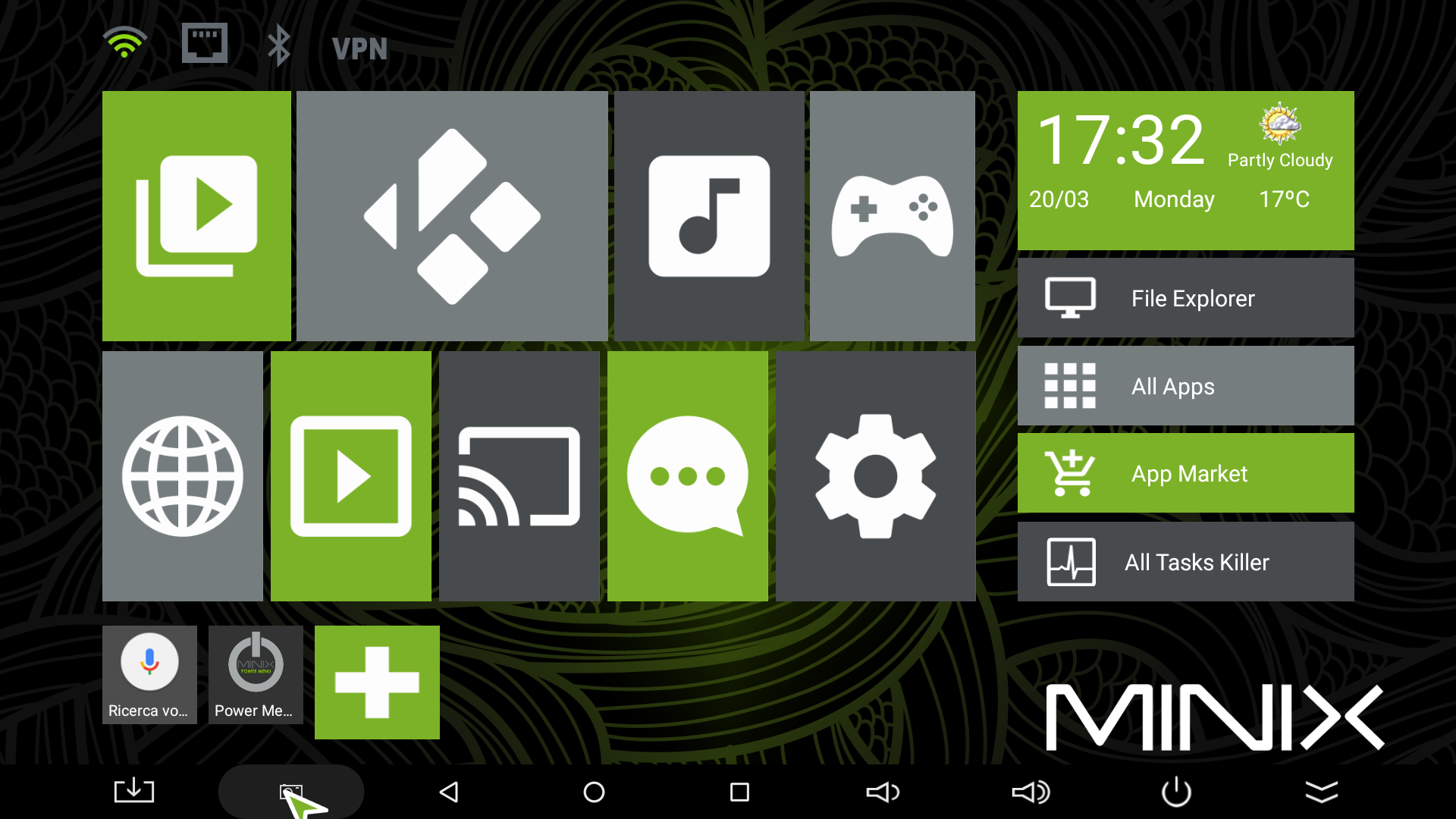 However, rummaging through the various shortcuts, we also find the classic Android "tablet", in fact there are some menus that reflect the style and interface of the classic tablet Android Stock. 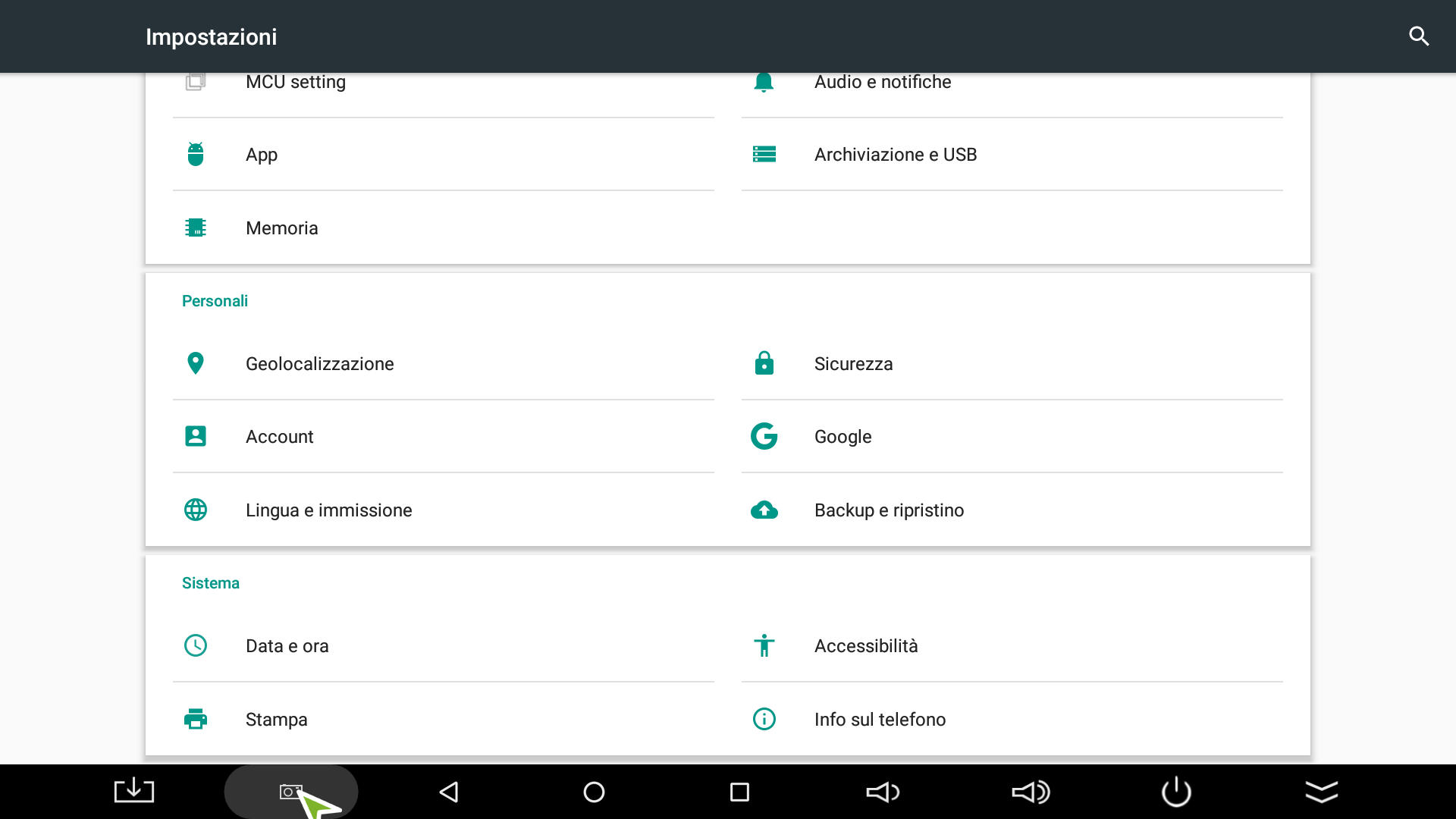 There are really many additional options in addition to the classic ones available, first of all in the system launcher, since we can assign each of the main shortcuts which applications to associate, in order to quickly start the Apps that most interest us. There is also a tool for cleaning the RAM, which will do nothing but close all applications in the background. 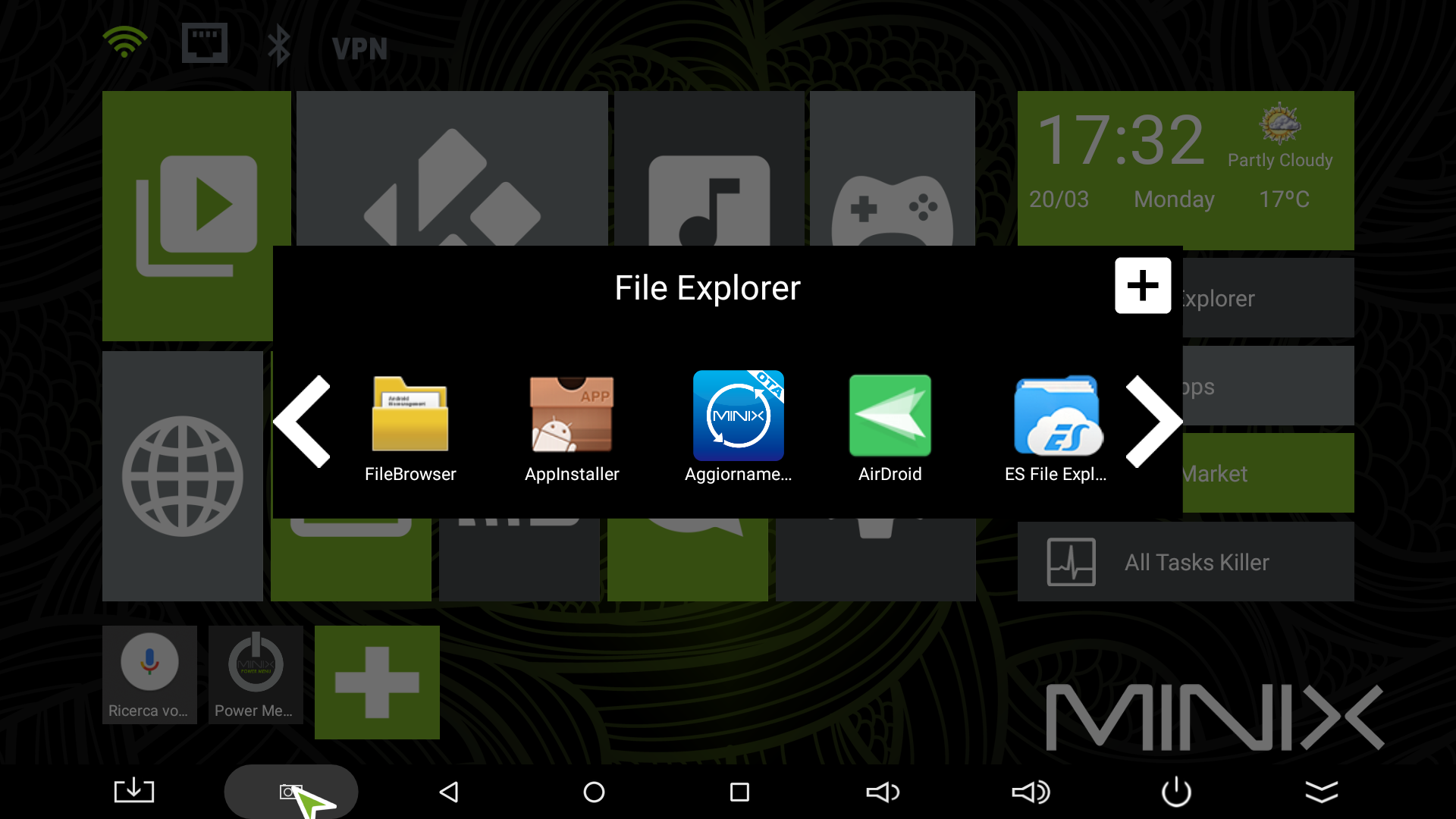 Android is present in the release 6.0.1 Marshmallow.

What sets it apart from the classic OS as well Google for tablets it is precisely the interface reviewed by Minix and that certainly helps us with the interaction and use of content, since it has been redesigned in such a way as to be used almost entirely with a simple remote control.

On the front of updates, the company, as is well known, has always been very active, both for the community and for the frequency and timeliness of updates, which often lead to improvements in firmware and bugfixing, as well as some news and to an ever deeper optimization, which allows the system to always run in a very fluid and reactive way in almost all situations.

The almost completely revised graphical interface allows you to easily use the operating system even without using a real mouse, since the layout of the menus and shortcuts allow you to do without the classic gesture of touch-screen displays, with the exception of most video games, so you'll have to use a real controller, and some special applications.

Speaking of the bundled remote control, the possibilities of use are very limited, since it is equipped with a simple system of arrow keys to move in the interface and in the menus, but not always enough and you will immediately resort to a alternative device.

Fortunately, the kit that the company has proposed for the review also includes the remote control Minix Neo A3, a device very well done and that integrates inside a system of accelerometers and gyroscopes that will allow you to use it as a real airmouse. In addition, compared to the old A2 Lite, the company has also integrated a microphone, to take advantage of the voice commands of Google search.

The product has excellent build quality and provides, in the front, the classic remote control with all the typical android commands and the main multimedia keys, while in the back we find a real qwerty keyboard.

When we talk about TV Box, Minix it is always to be considered one of the leading manufacturers in this sector, since indeed among the various devices tested on very few we have found defects, among other things mainly software defects that can be easily solved through the frequent updates released by the company. Again we have poco to say, the product very much follows the "ideal lines" of Minix, which hardly provide the latest SoC in favor of more tried and tested solutions, just like this Minix Neo U9-H, where is the SoC Amlogic S912 fully reflects the philosophy of the manufacturer. It is therefore not a monster of power but a real TV Box in the true sense of the word, since it is all about the codec and video, but without disfiguring too much in other contexts. The only defect is perhaps the price, a bit 'too expensive in my opinion, but you know, quality and especially the quality at the software level you pay, especially in view of future longevity.