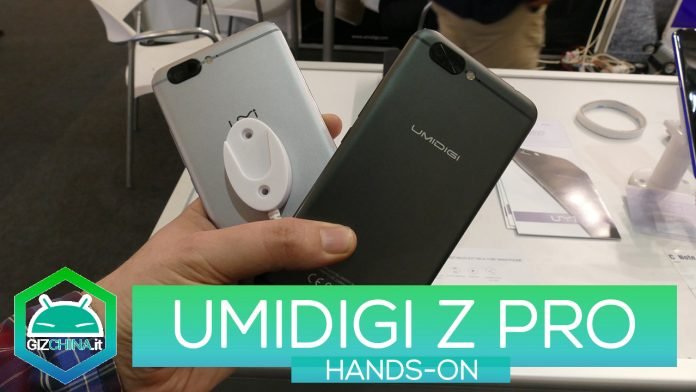 UMIDIGI, previously known as UMi, officially debuted with its new name al Mobile World Congress 2017 di Barcelona, showing some of his most interesting devices, including the latest one UMIDIGI Z Pro.

The new version of the terminal is presented as an upgrade of the previous one UMi Z and inherits its design as a whole. Very similar, for example, even the camera layout, which here however has a double sensor. In particular, the terminal is equipped with two cameras Sony IMX258 both of them 13 mega-pixels, of which one is in black and white and the other RGB.

Taking a closer look at the app Bedroom, we can see the presence of different shooting modes, including that Bokeh. It is certainly the most interesting, even if already present on other devices, which allows you to adjust the blur after taking the shot.

As already seen on the P9 and P10 it is possible, even with theUMIDIGI Z Pro, activate the Mono mode which allows you to take pictures using only the sensor B&W da 13 mega-pixels. The front one, on the other hand, has a sensor Samsung always from 13 mega-pixels.

The main differences between the Pro version and the standard version, therefore, are limited to the photographic sector. The Z Pro, in fact, offers a display from 5.5 inches diagonal with resolution Full HD 1920 x 1080 pixel produced by Sharp and with technology IPS offering a pixel density of PPI 441.

Update to Nougat scheduled for the next few months

As for the software part, theUMIDIGI Z Pro has pre-installed Android 6.0 Marshmallow, and not strangely Android 7 Nougat. Fortunately, the company has assured us that the phone will receive nougat in the next months.

On the front we find a Home button touch-like (so not physical) oval shaped that also acts as a fingerprint reader to unlock the device in complete safety. On the sides of the latter we find two soft-touch buttons that, at least for the unit exposed to the MWC17, they are not backlit.

Regarding the construction, theUMIDIGI Z Pro It is characterized by a metal body with two plastic bands for reception placed on the top and bottom of the back-cover. Although it has a fairly low thickness, it is Z Pro it is powered by a well battery 3780 mAh with support to quick charging.

The phone is moved by a processor deca-core MediaTek Helio X27, making it the first commercial phone to have this type of SoC inside. The chip can count on the help of the GPU Small T880 MP4 and 4 GB of RAM. Finally, internal storage is from 32 GB, further expandable through micro SD.