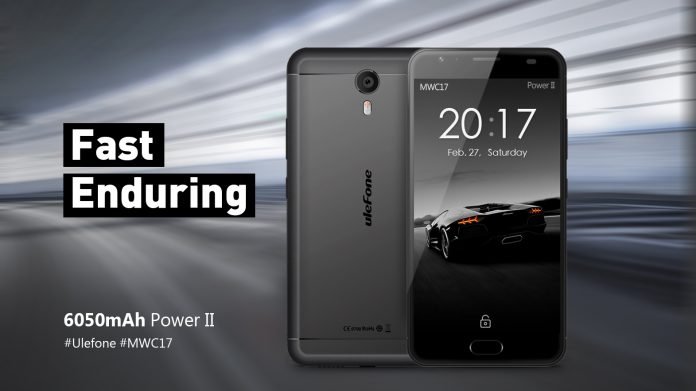 After the successful success achieved with his Power, the Chinese company Ulefone now feels the need to develop a series of devices with large capacity batteries. That's why he decided that he will release the new one in the future Ulefone Power 2 with updated technical features.

According to reports from the Chinese manufacturer, the second generation of smartphones will still retain a battery with capacity to 6050 mAh but it will be characterized by a new generation of Sony cells that guarantee a more stable output and better autonomy.

Ulefone Power 2: the company will show it in preview at MWC 2017!

The Asian brand also confirmed that theUlefone Power 2 will have 4 GB of RAM, of 64 GB internal storage and a fingerprint reader integrated into the physical Home button, the latter positioned below the display.

Since we are talking about a smartphone for the 2017 market, the device will have the operating system Android 7.0 Nougat pre-installed. Regarding the design, the future smartphone will propose a metal frame with plastic back-cover, the same structure adopted on the current model.

Unfortunately, Ulefone has not revealed any details about the processor that will move the new phone but we believe it can be a next-generation chip offered by MediaTek.

27 2 from February to March, the Chinese company will have its own stand at Mobile World Congress 2017 di Barcelona where will show theUlefone Power 2 along with two other interesting terminals, namely the Gemini Pro el 'Armor 2.