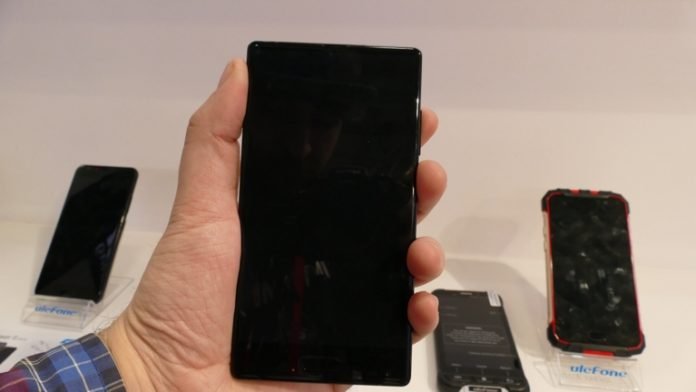 After talking to her, a few days ago, on our pages, we were very intrigued by this device, for this reason we went to the booth di Ulefone here al MWC 2017 to be able to look at it closely. What are we talking about? Of Ulefone F1, terminal that will represent the first true high-end smartphone of the Asian company and that, being at least as far as aesthetics seem to be, will try to challenge Xiaomi Mi Mix.

Ulefone F1 - The hands-on of GizChina.it

Unfortunately the information regarding the technical data sheet of the terminal supplied by Ulefone they are not complete, on the other hand we are talking about a smartphone that will see the light only in the second half of the 2017.

The unit that we have seen, in fact, is in a pre-productive stage, so at least for now we have not been able to see the screen on.

Let's start by telling you that the back cover ofUlefone F1 It is completely in glass and, above, we find a dual chamber of which we do not know yet and specific.

Previously, however, this smartphone remembers (and how could it not) Xiaomi Mi Mix.

The terminal, in fact, is bezel-less sideways while above it has only a very thin edge where the traditional auricular capsule is positioned, no ultrasound technology, so for Ulefone (and maybe, it's good).

At the bottom, just like in the Mi Mix, we find the front camera, a fingerprint reader and the proximity sensor.

To complete the partial technical sheet we find a SoC Mediatek Helio P25, 6 GB of RAM e 64 / 128 GB of internal memory and the display has a diagonal from 5.5 inches.

Finally, theUlefone F1 should be marketed in the second half of the 2017, we do not know the price yet but, according to what was revealed by a company spokesperson, will be the most expensive terminal ever made in their line-up, a real top of the range.