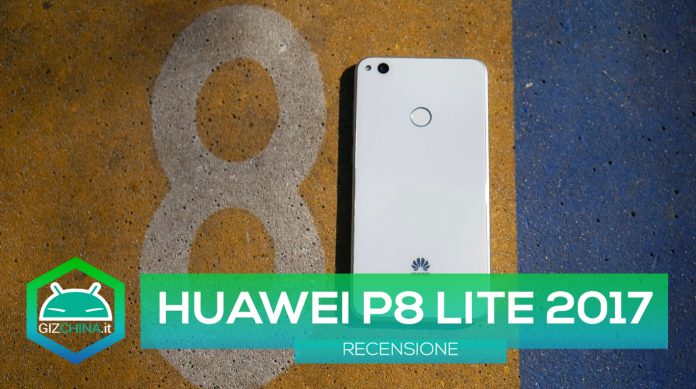 So what better way to celebrate this bestseller if not presenting the Huawei P8 Lite 2017? Surely, at least from the marketing point of view, an interesting choice, especially towards who is or was owner of the P8 Lite and maybe he's thinking, at a distance of two years, to replace your smartphone with a more recent variant.

To know, however, how it really works Huawei P8 Lite 2017, you just have to follow us in our full review! 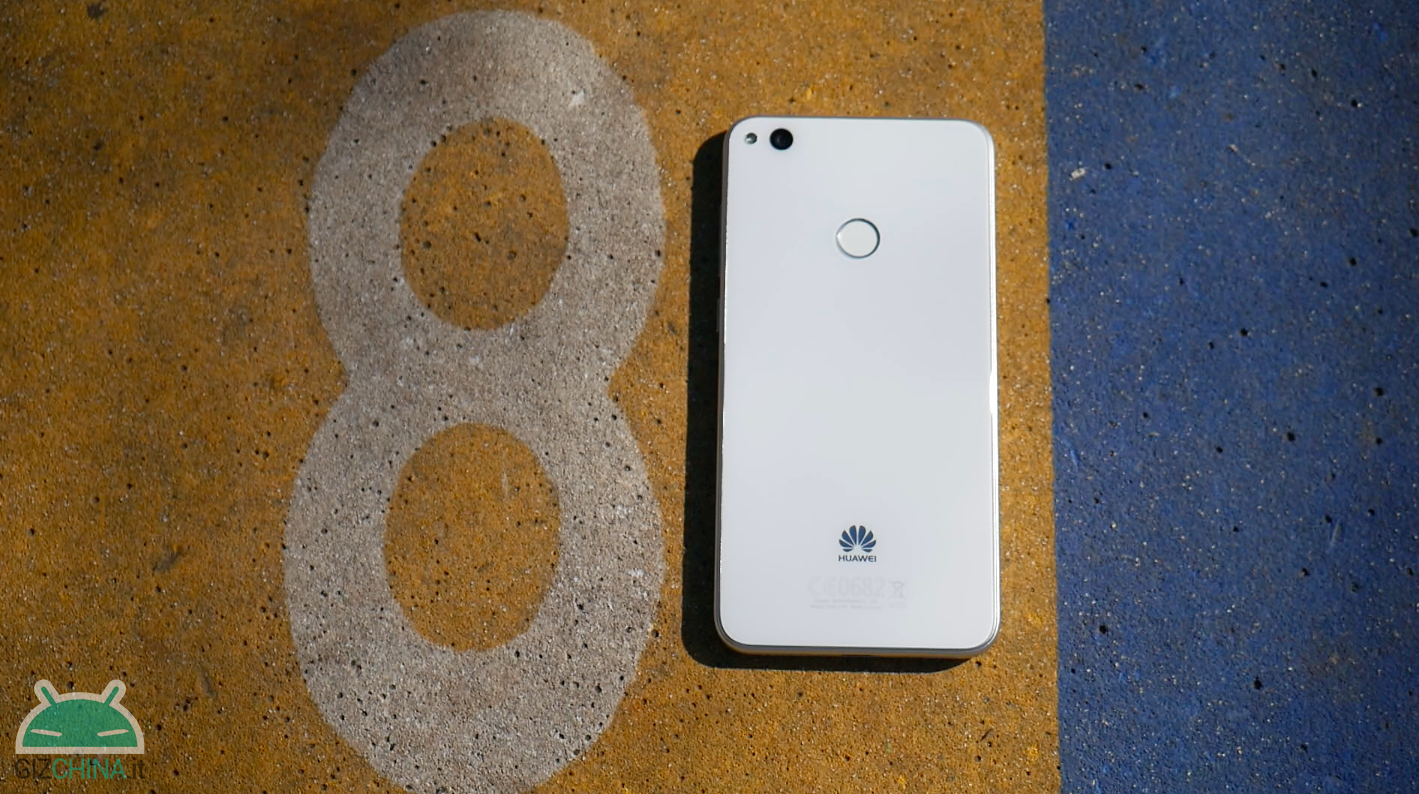 The sales box, provided to us for the review by the company, comes with a sliding white package, reserved for journalists, whose content, however, does not see the presence of the earphones, included in the official sales package.

Il Huawei P8 Lite 2017 resumes the form factor of its high-end cousin, Honor 8. The device in our possession is in color Bianca, but it is also available in the variant Black e gold. Very good feeling of solidity restored to the touch, thanks to the good materials used and to an impeccable construction. 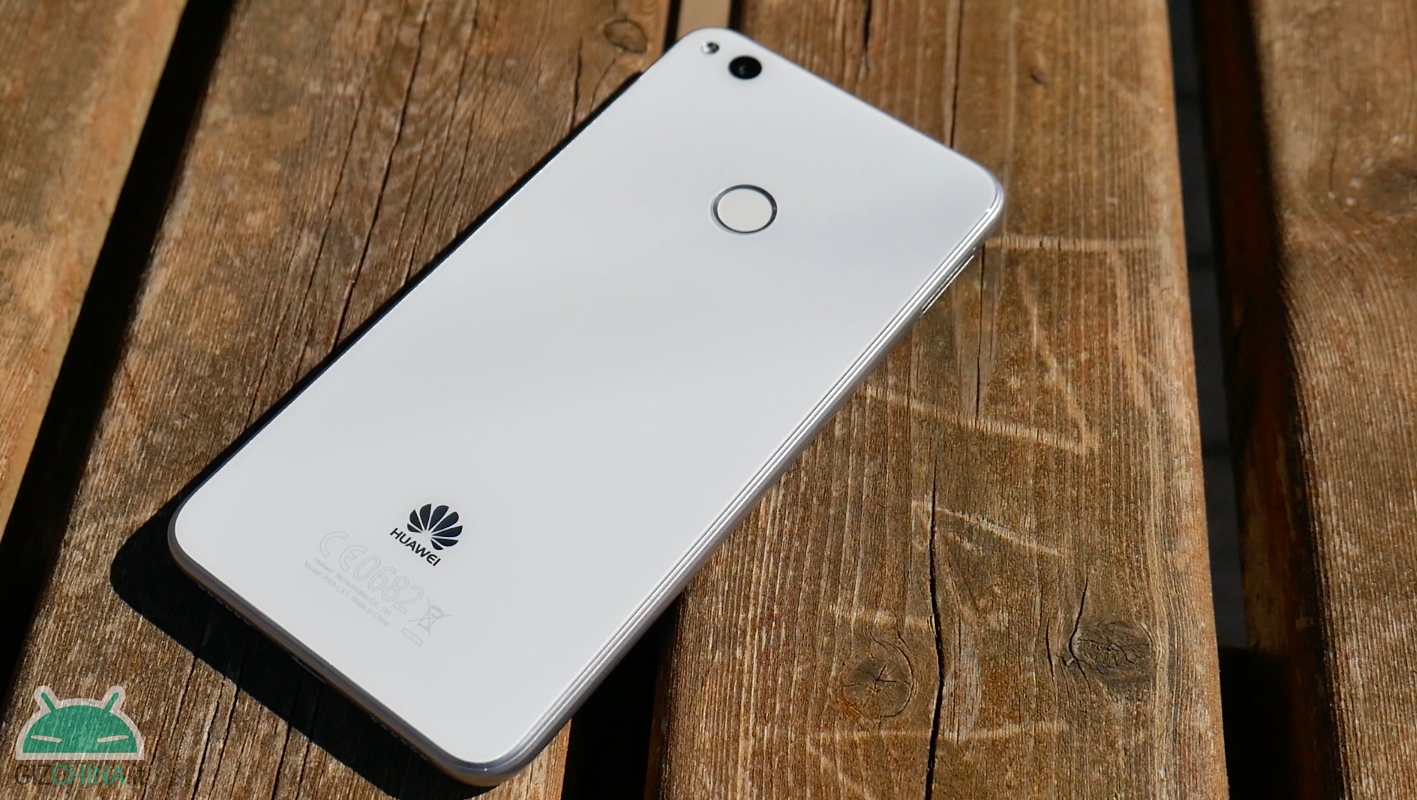 Portability is certainly favored by the compact size of 147.2 x 72.9 x 7.6 mm, for a weight of approx 147 grams. The device is held rather well in hand, thanks also to the rounded frame, with a metal effect finish. The adoption of a glass both front and back, with curvature, is satisfying to the eye 2.5D, which guarantees to the touch the absence of sharp edges along the entire profile of the smartphone. 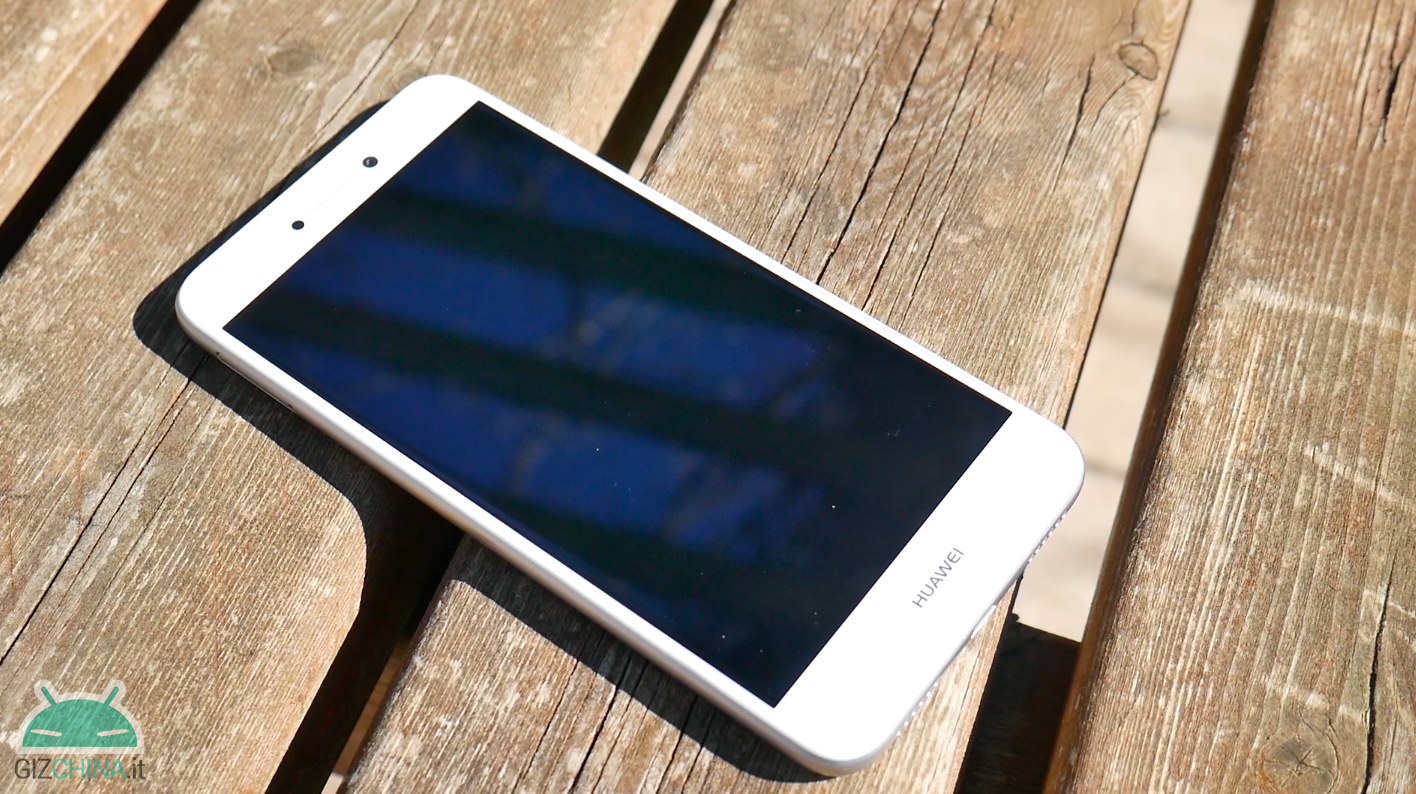 Frontally, in the upper area, we can see the front camera, the ear capsule, the notification LED and the brightness and proximity sensors. At the bottom, however, there is the logo Huawei. The keys, as usual, are on screen.

Later we find a novelty compared to the previous one P8 Lite, Or the touch fingerprint reader. Operation is excellent, both in terms of speed and precision. In addition to being able to register up to 5 fingerprints (but of different fingers), we can activate some gestures, functional in everyday use. 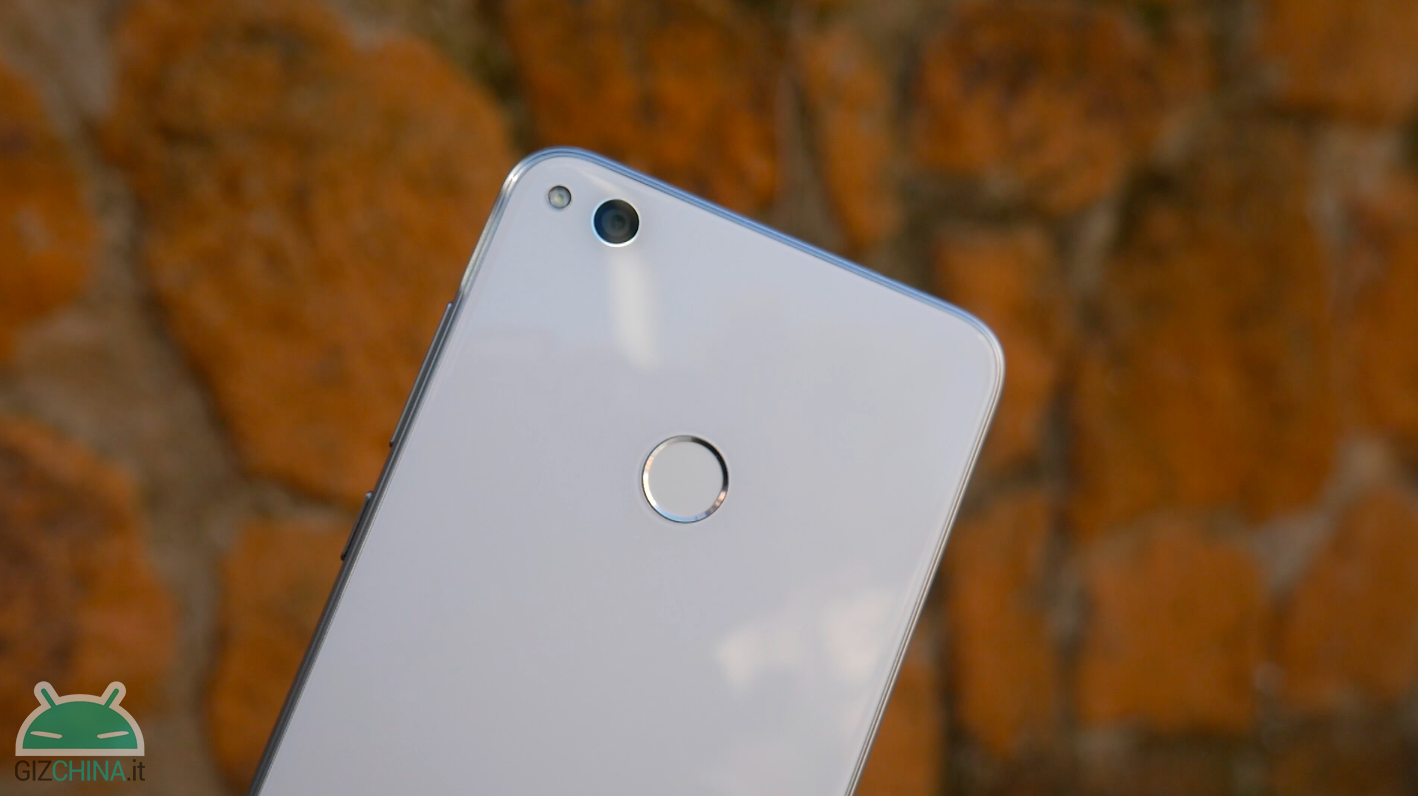 As mentioned above, at the top, in the rear left area, there are the photographic sensor and the monochrome flash. 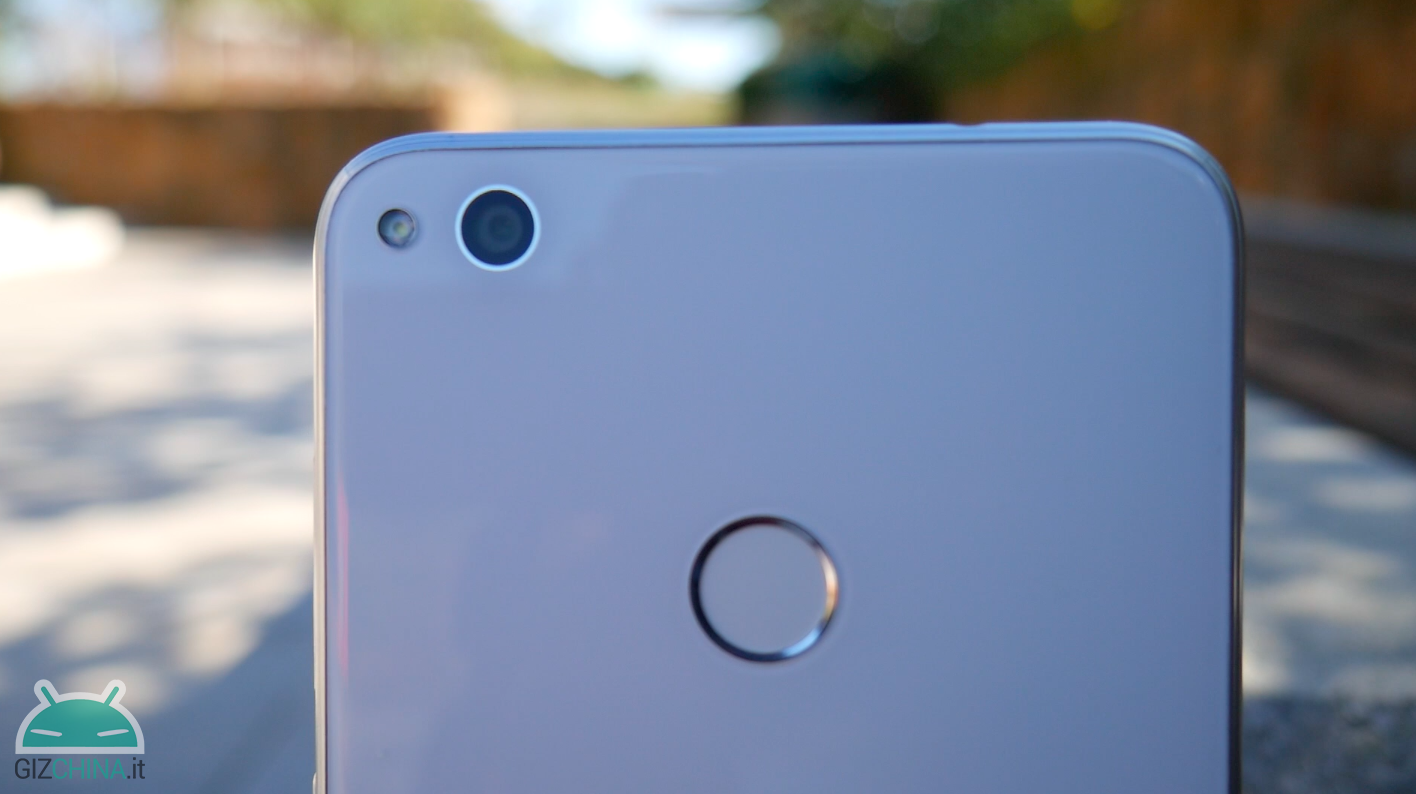 As for the side profiles, on the right there is space for the volume rocker and the power button, while on the left is the slot capable of hosting a nano SIM and memory expansion up to 128 GB via micro SD.

Above we see then the 3.5 mm mini-jack input and the microphone for noise suppression, which works together with the main microphone, located below and flanked by the input Micro USB and by audio speaker. 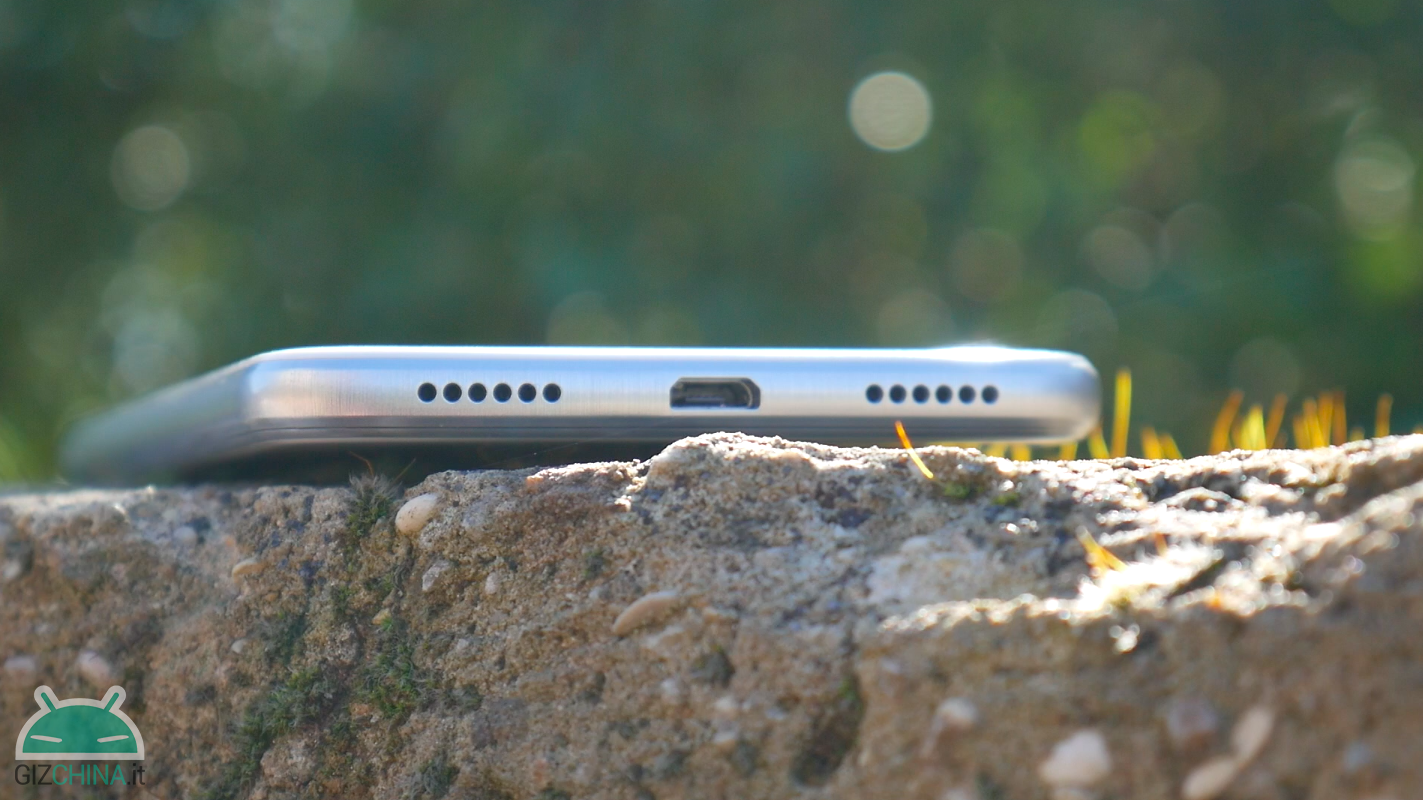 As in the case of P9 Lite, also for this Huawei P8 Lite 2017 the company has decided to continue using a panel from 5.2 inches, with resolution Full HD, PPI 424 and technology IPS. Good color tone chosen for this panel by the company, as well as the viewing angles, with typical blacks from IPS LCD, that is good but not particularly profound. 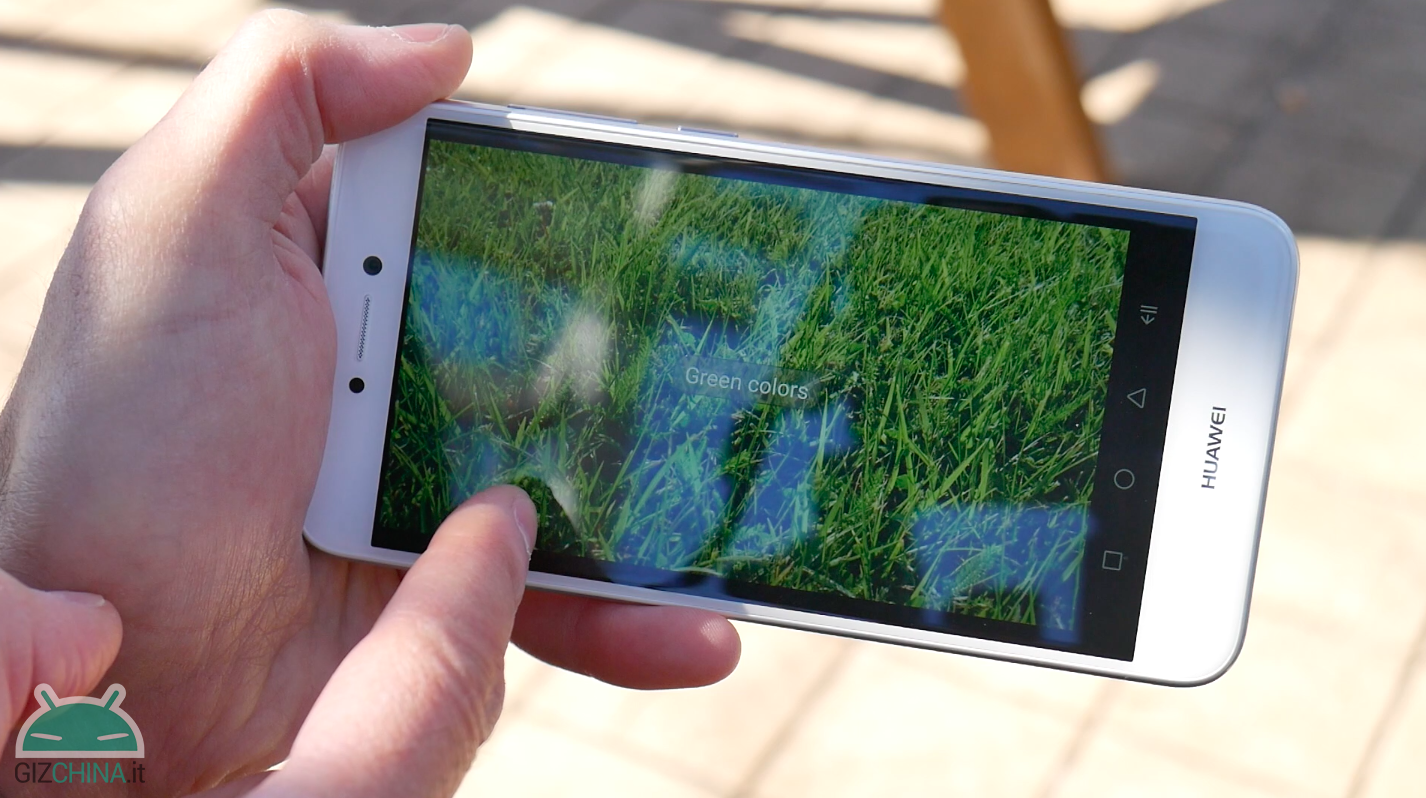 It is, however, possible to calibrate the color gradation of the display to our liking, either via 3 preset profiles, either manually using the appropriate color wheel. There maximum brightness presents a good value, suitable in bright direct light conditions. 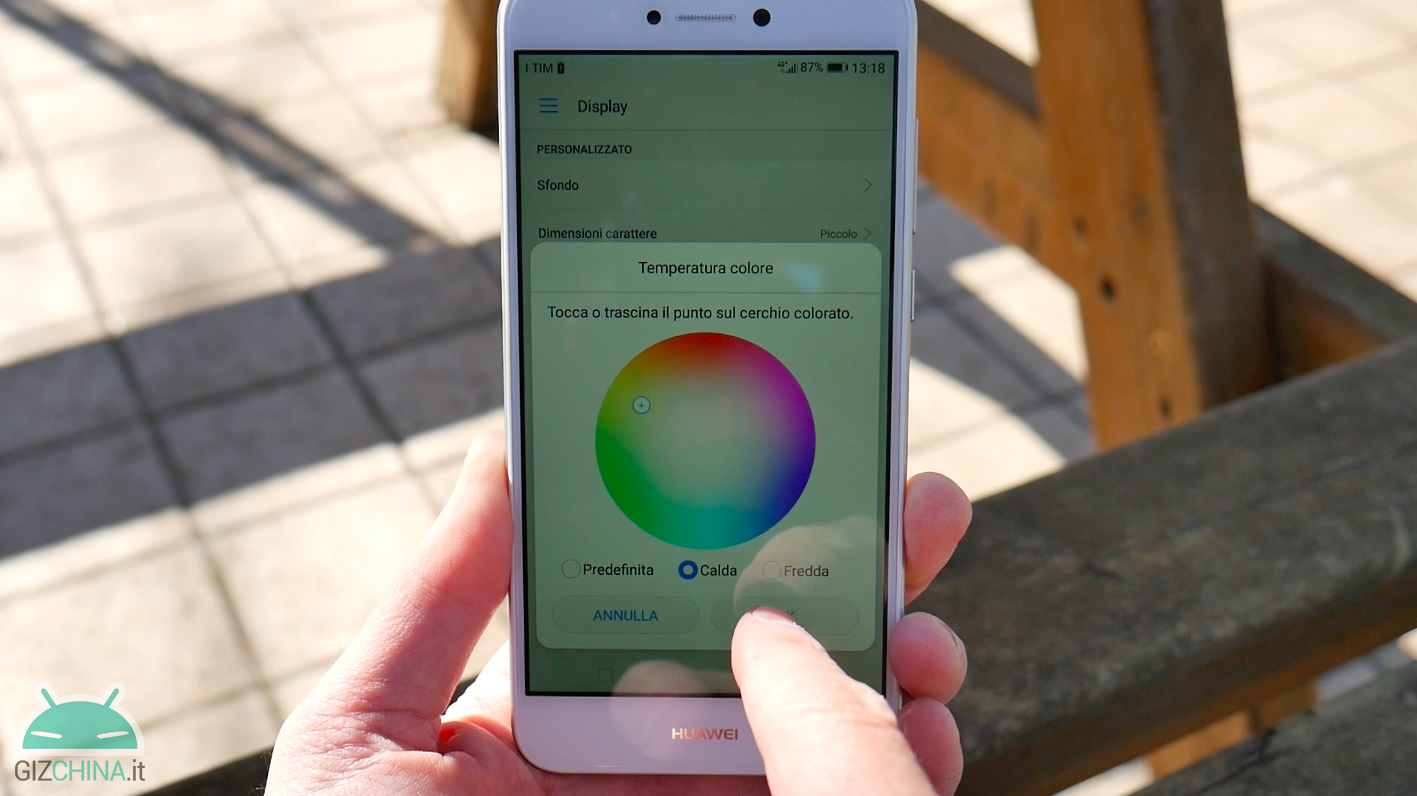 Sufficient the oleophobic treatment as well as that anti-reflective. No problem even with regard to the touch screenAlways very reactive; also available in the settings menu gloves mode, which will ensure greater sensitivity in the use of the touchscreen. 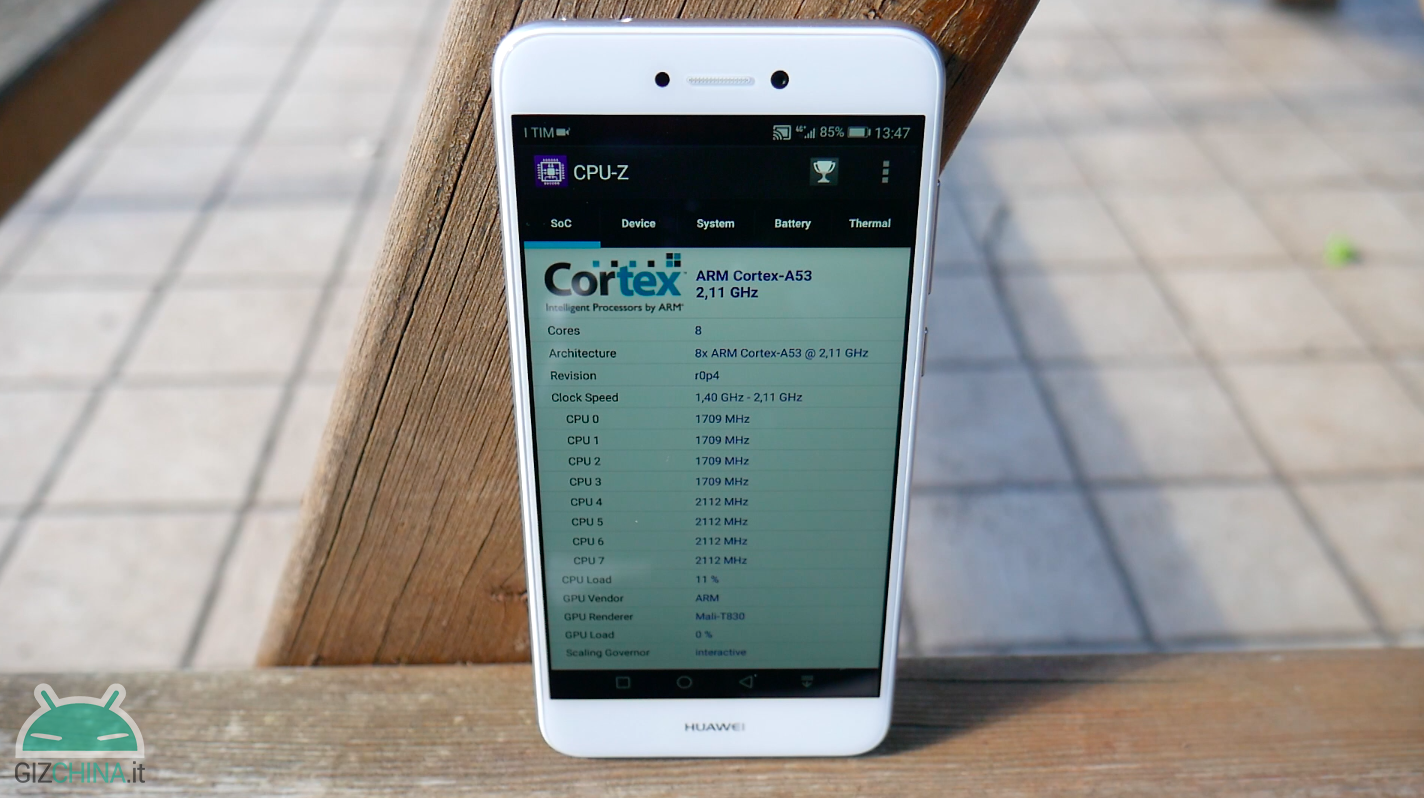 We emphasize that the Kirin 655moreover, it is made with a 16 nm FinFET, this guarantees better performance in terms of energy efficiency. Although we are talking about a mid-range CPU, with non-exciting benchmark results, we know that this does not affect the everyday user experience. In fact, the software and all the applications, from the lightest to the heaviest, run smoothly and there is no lag or jamming. 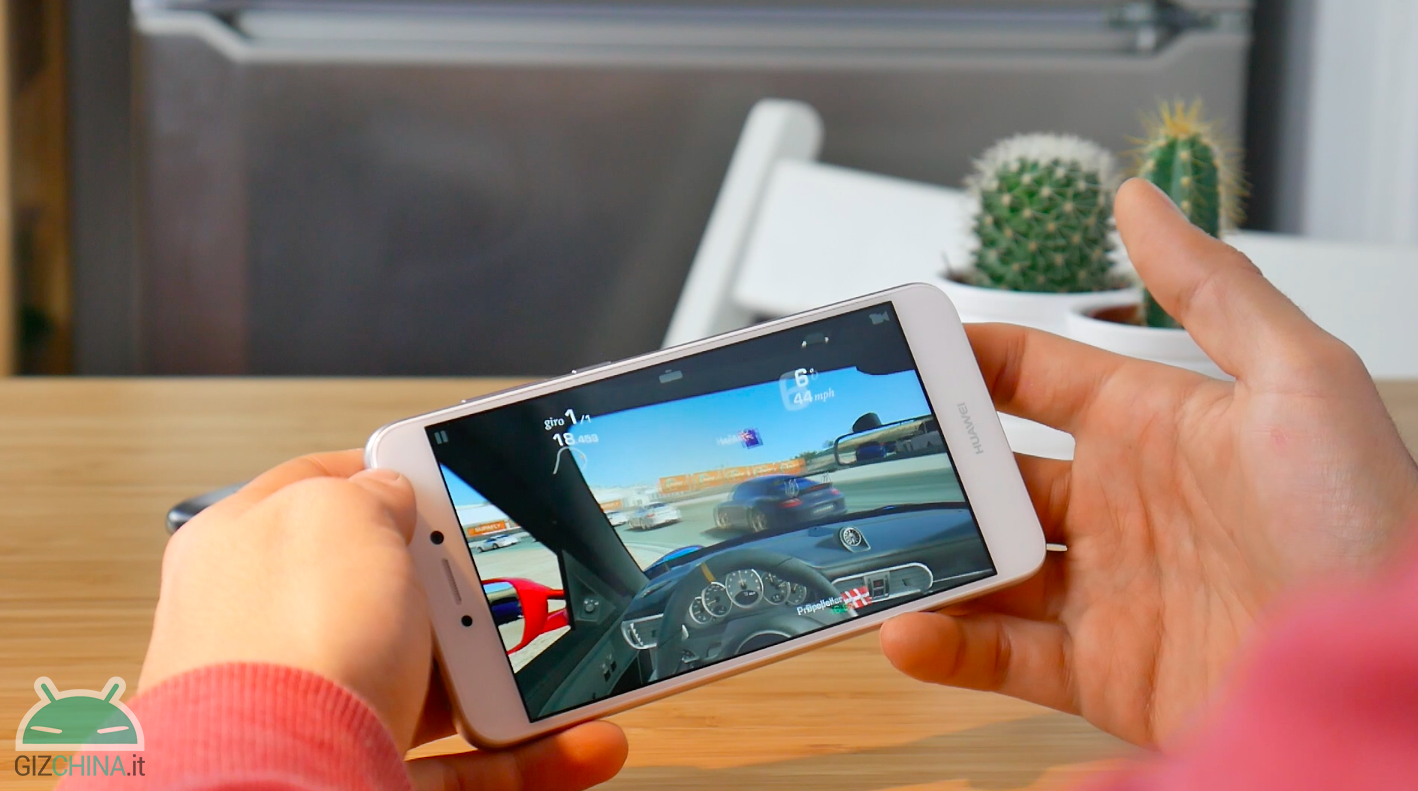 The graphic sector, as previously mentioned, relies on ARM Mali-T830 MP2 that, even during the gaming experience with heavy titles like Real Racing 3, it performed well, without frame drops, with details set to maximum. The device then presents 3 GB di RAM L e 16 GB di internal memory, expandable via micro SD to 128 GB.

Obviously, no problem has been found in the Browsing (Google Chrome is installed by default) and in video playback, with support for 4K format. 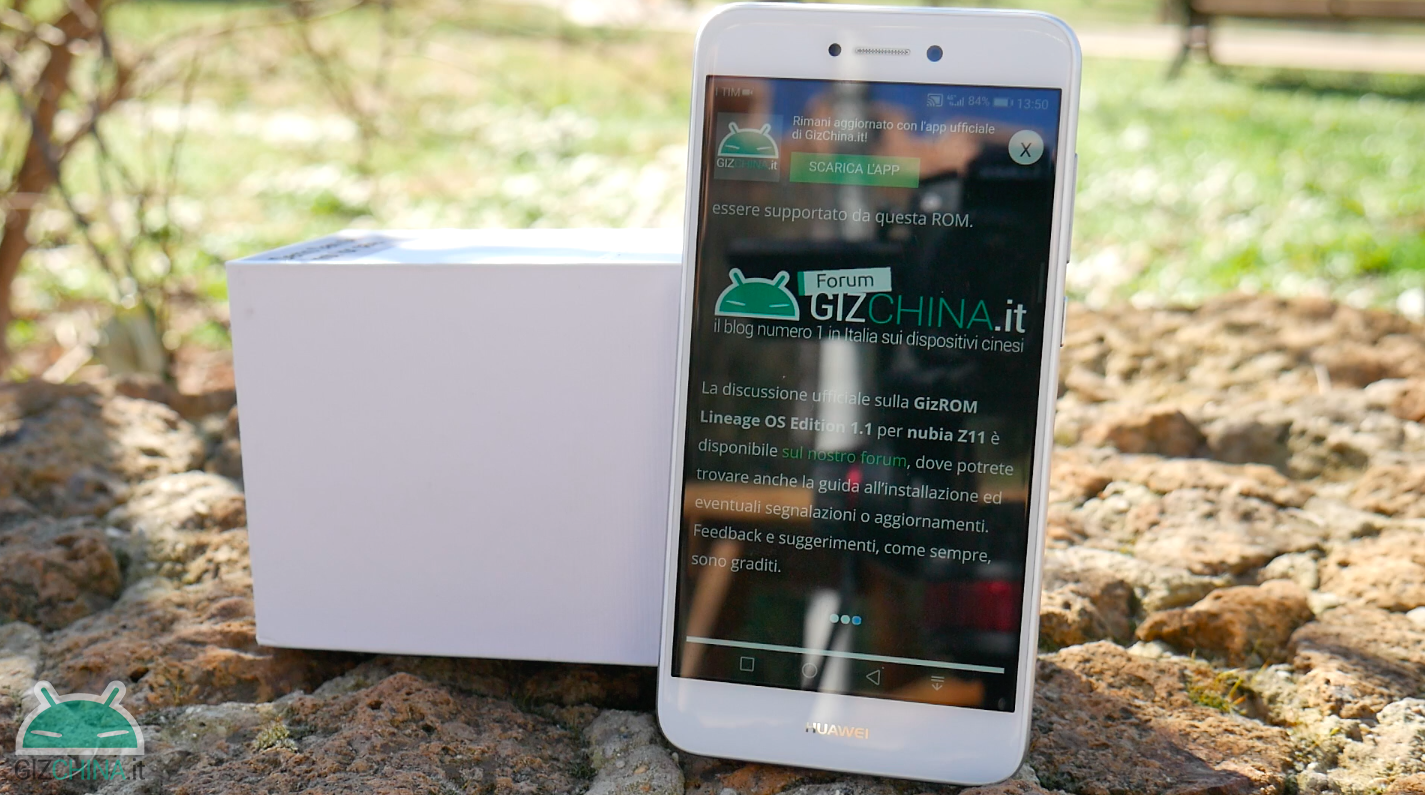 The photographic sector of this Huawei P8 Lite 2017 it's really a big step forward compared to P8 Lite. On board we find a rear sensor from 12 mega-pixels (in format 4:3), with pixels from 1.25 μm, opening f / 2.0 and focus system PDAF, flanked by a single flash LED. 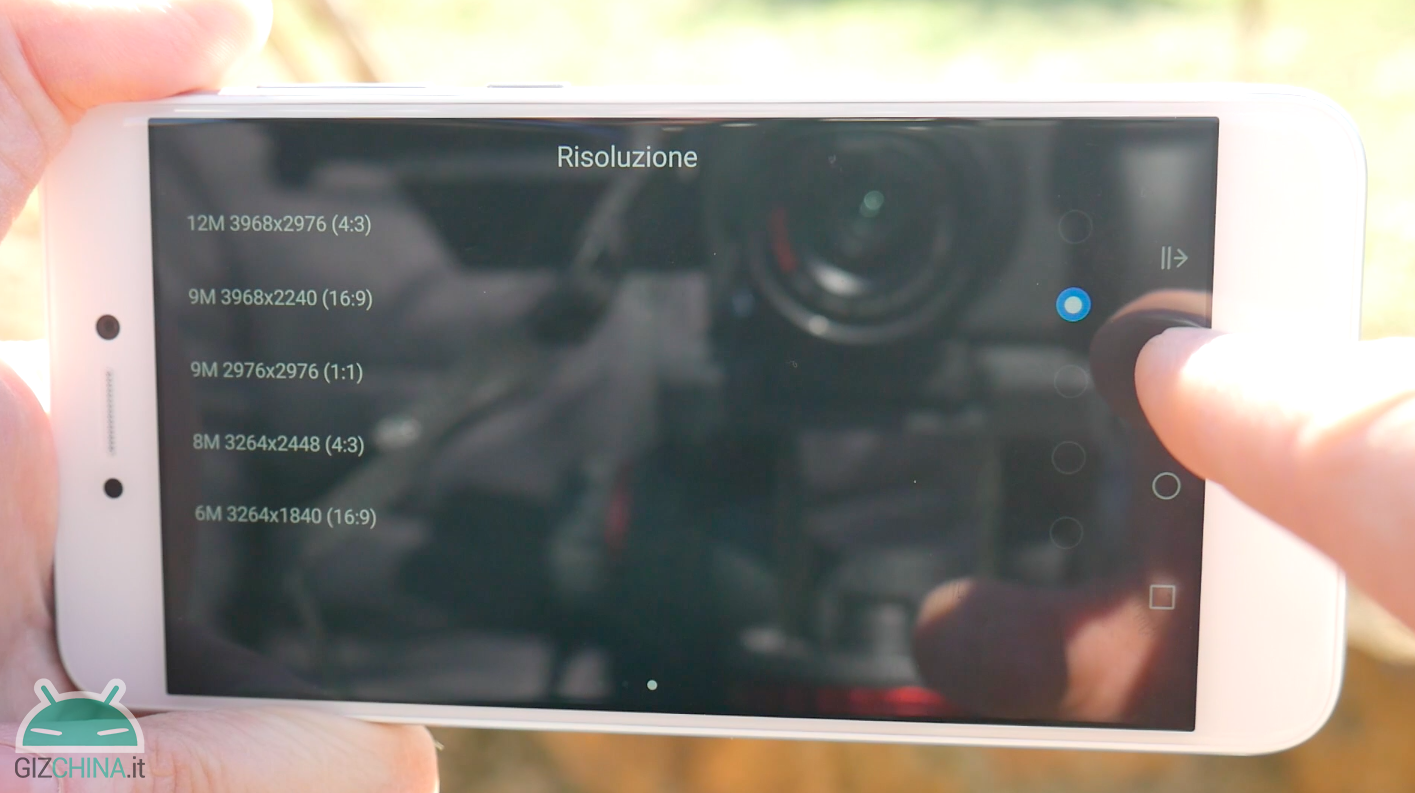 Quick enough focus and good shots made in good light conditions; I especially appreciated the macro and the good level of bokeh effect that you can get. The balance of white and colors is also good.

In low light conditions a certain amount of noise is visible but, when shooting close-up subjects, the powerful and, above all, well-synchronized LED flash comes to the rescue.

On the other hand, we find one front camera with sensor from 8 mega-pixels, also equipped with opening f / 2.0, which guarantees good shots in conditions of good light and just enough when the light comes down; in this sense, the "flash" function, linked to the illumination of the display, is a minimum in aid. Excellent camera interface, full of modes and customizations.

Slightly renewed icon graphics, thanks to EMUI 5.0. A swipe to the right leads to the part related to shooting mode, including HDR, Panorama, Pro Photos, Video, Pro Video, Night Shot and Light Painting.
With a swipe to the left, however, opens the settings curtain, where you can adjust the resolution, insert or delete the grid, set the timer and so on. 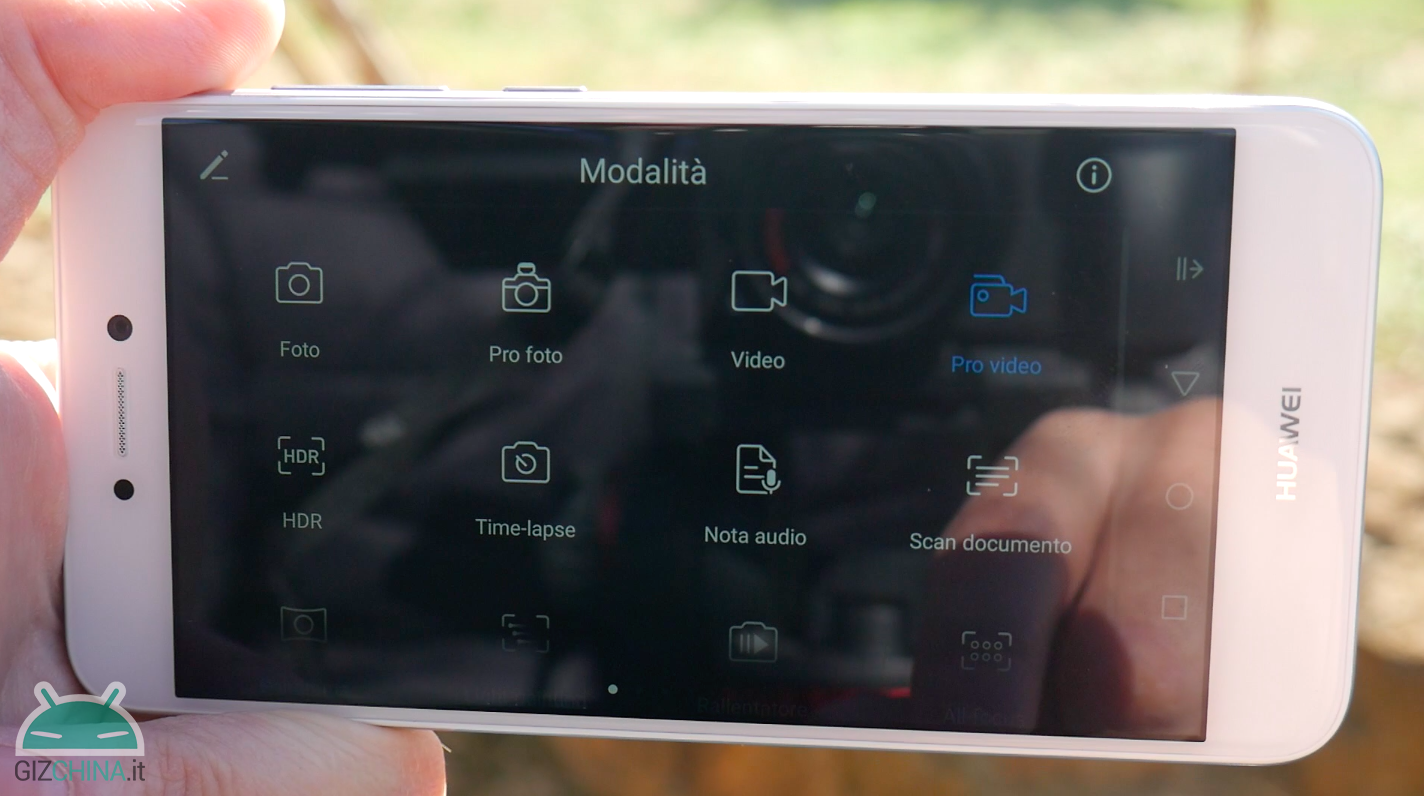 Videos can be recorded up to a maximum resolution Full HD a 30 fps. Absent the stabilization optical and present only that digital, which works fairly well especially if we think of the price range of this device. Present, as we had also seen in Huawei P9 Lite, The mode PRO Video, which allows you to set all the parameters manually, as happens in the manual mode as regards the photos.

Good one sound quality of the main speaker, which has a rather high volume, although there are more high pitches than bass. The situation in the capsule is decidedly better. 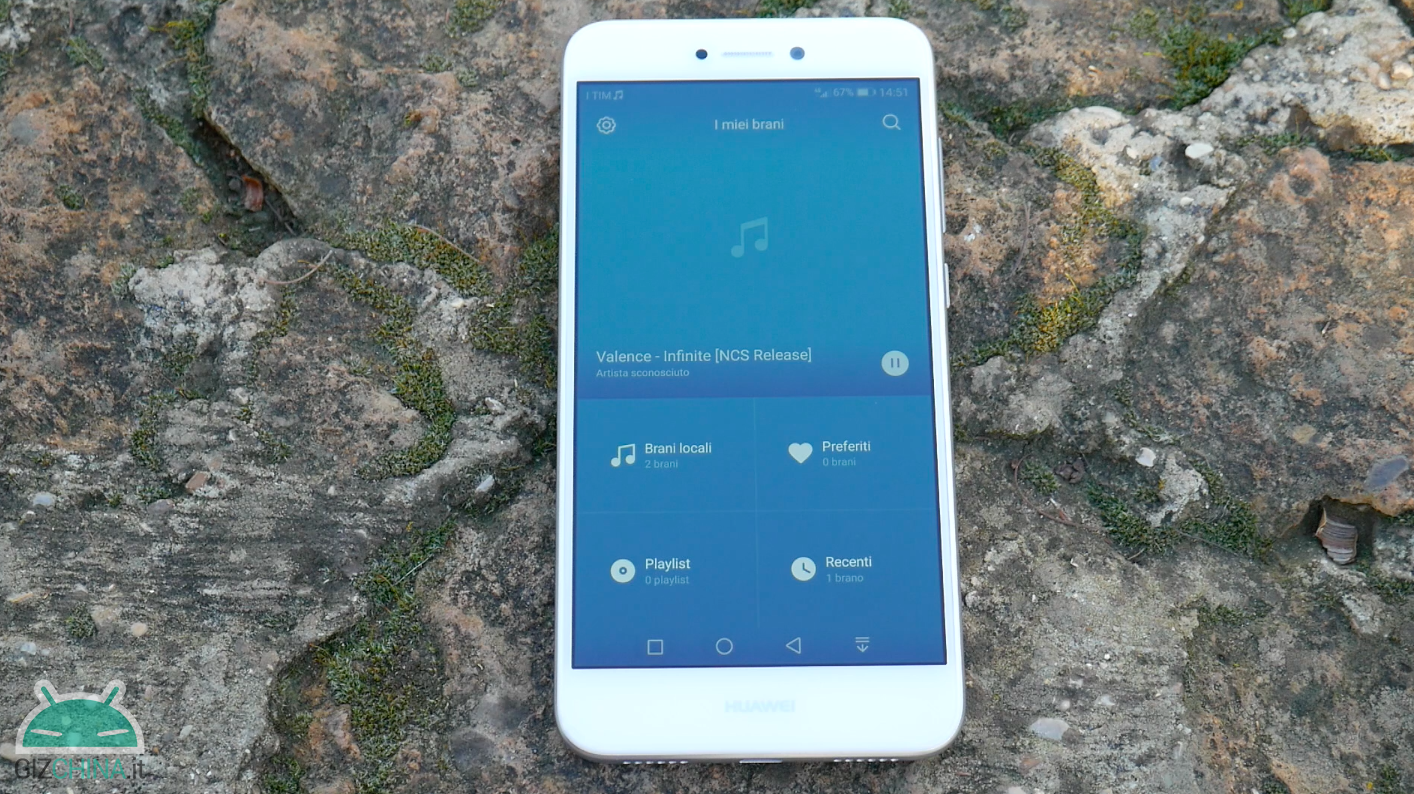 In the music player installed by default there is no possibility of equalizing the sound, if not the function SWS , which can be activated only with earphones, which makes it possible to emphasize low tones. The sound quality of the headset in listening is also good, and the microphone for calls is also good.

In the variant of the Huawei P8 Lite 2017 at our disposal, there is only support for the use of a single one SIMs. in nano format. Also present the possibility of expanding the internal memory from 16 GB (of which approx 10 GB available to the user on first power up) through the use of a card micro SD from maximum 128 GB. No problem of receiving and latching cells, thanks to the modem LTE Cat.4, the signal is stable and also the connection of the same when not available.

As in Huawei P9 Lite e Honor 6X, we report the lack of Wi-Fi Dual Band (more justified by the approximately 50 euro of difference with the other devices mentioned). In fact, only connectivity exists 802.11 Wi-Fi b / g / n, in addition to that Bluetooth 4.1 and GPS / A-GPS / GLONASS. To be noted the presence ofNFC and the possibility of using the smartphone as Wi-Fi Hotspot, sharing one's own Data connection with other devices nearby.

At the software level, on the P8 Lite 2017 are Android 7.0 Nougat, accompanied by the renewed proprietary interface Emotion UI 5.0. 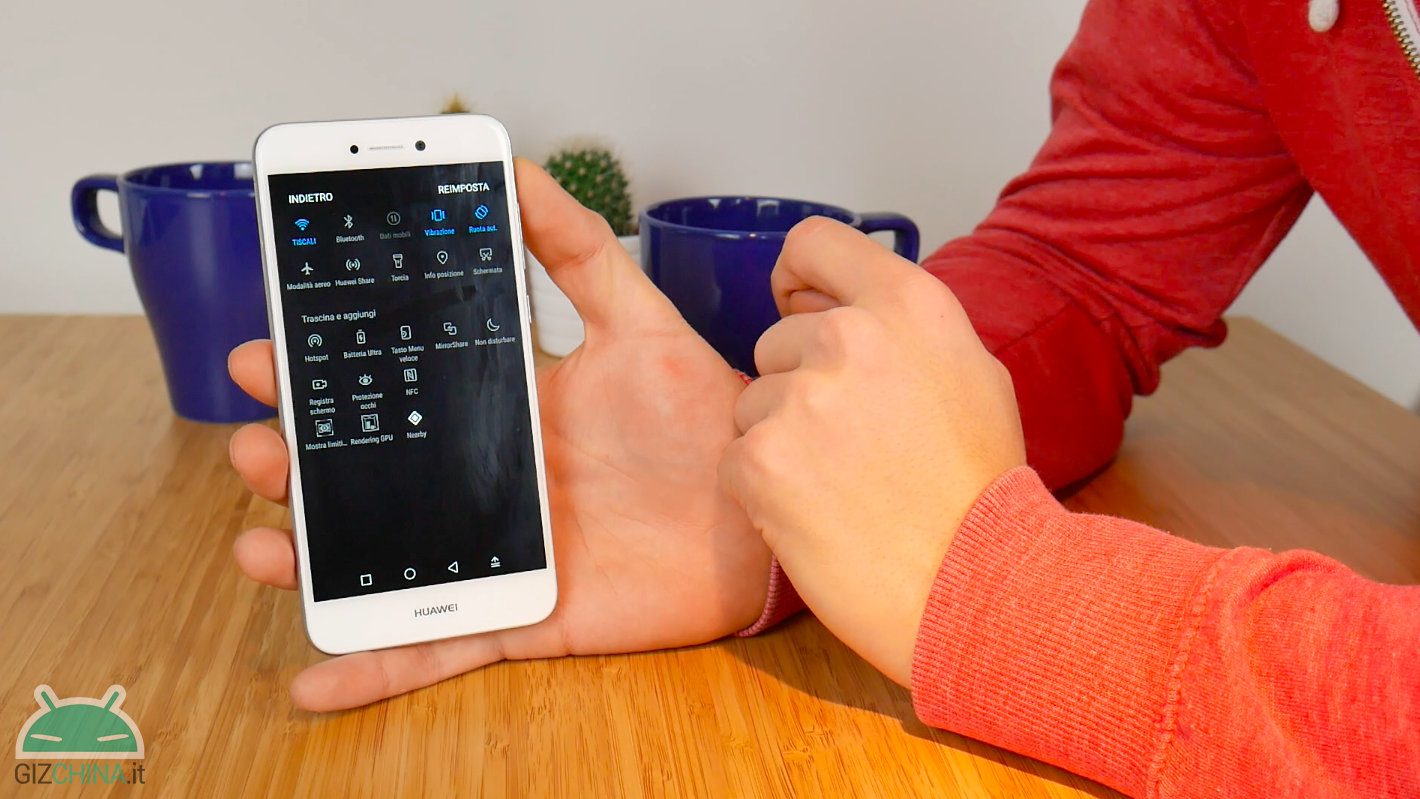 The graphics of the entire operating system have been renewed, much more in line with the material design style. Redesigned i quick toggle, now in color blu, and also new extended notifications according to the standards of nougat. 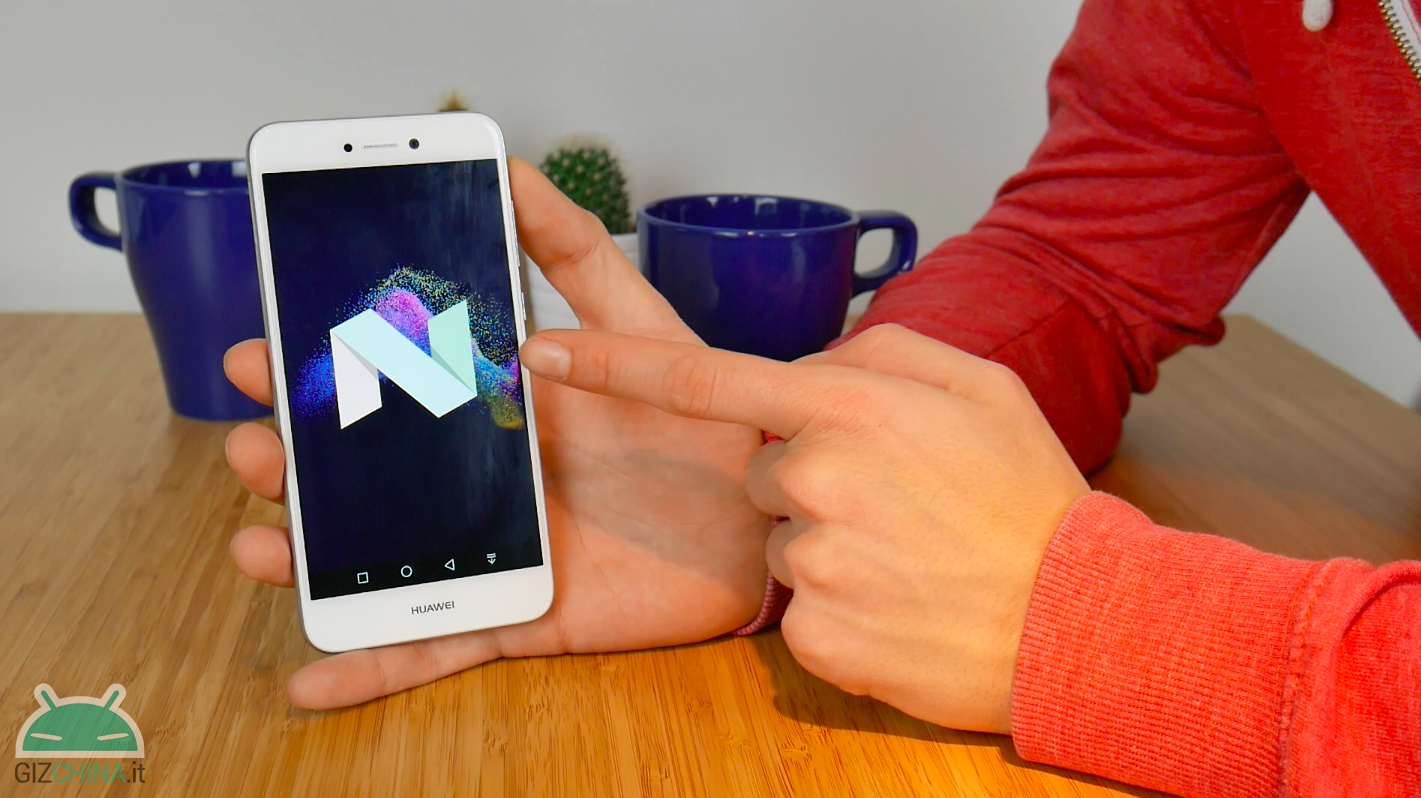 Always borrow from Nougat the possibility of a native support a two languages of system, lo split screen to manage two different applications simultaneously on the display and the swipe among the latest two applications used through a double tap of the button multitasking. 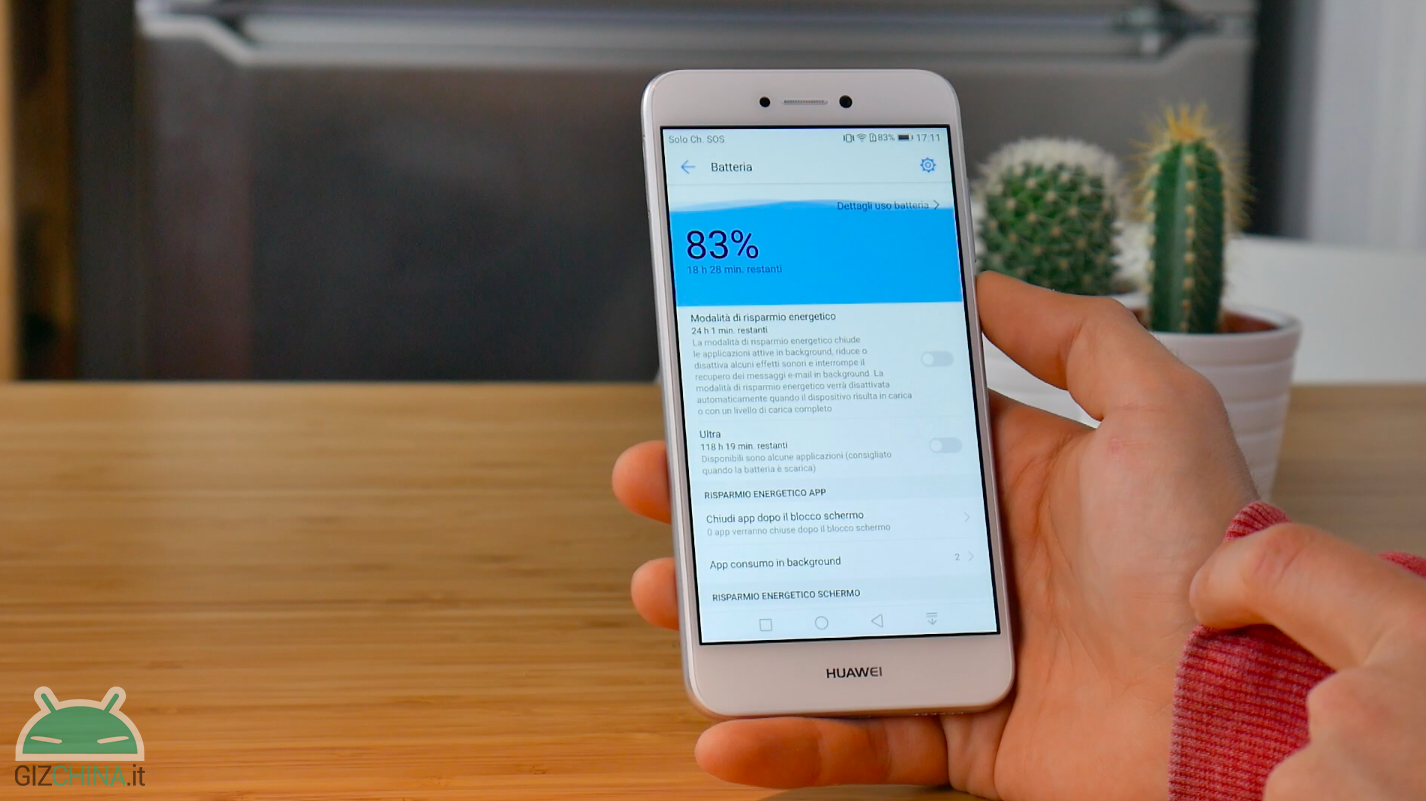 The battery menu has also been radically renewed, truly complete, thanks to which it is possible to activate and customize the energy saving of the smartphone. In short, the already countless possibilities for customizing the EMUI are further amplified with the support Android 7.0.

Accomplice the Kirin 655, made with a production process a 16 nanometers, the consumption of this P8 Lite 2017 they are particularly parks. Indeed, the battery integrated (and not removable) from 3000 mAh manages to cover a day of intense use without any kind of problem and, above all, without having to resort to any kind of energy saving.

Reaching the 5 hours of active display it is within everyone's reach, which can be considered without a doubt a good result. As regards, however, the complete recharge cycle for the battery, unfortunately they are necessary not less di 2 hours, which is mainly attributable to the charger with output a 5V e 1A.

Finally, we come to the conclusion of this review. Huawei P8 Lite 2017 is a device that, although it does not excel in any specific field, can be considered a device a "All round". In all circumstances it is rather reactive and, above all, you have the feeling of a device that has reached a good level of maturity from every point of view.

Absolutely appreciable the new design (which is sure to be successful, given the similarity with Honor 8) which, together with a good hardware compartment, one EMUI 5.0 renewed and updated a nougat and with the plus of a street price under i 200 € (on The Amazon it is already possible to find it at 197 €), is a mix to decree new goals in sales that will not be long in coming.

In short, a device that has convinced us; and what do you think?