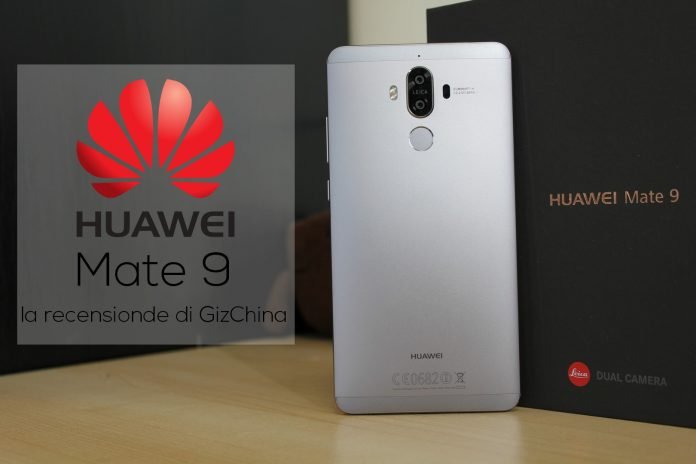 Like every self-respecting fall, this year too Huawei presents its top of the range phablet, in this case the Huawei Mate 9, object of ours review today.

After a few days of use, we can safely say that this is the best device ever produced by Huawei. But this will be enough to ensure that the Mate 9 actually manages to establish itself on the market as first choice between the devices of high-end? Let's find out in our article!

As for the previous top of the company range, too Huawei Mate 9 arrives in a rich and well finished package. Inside, in fact, we find:

To report how the smartphone presents one protective film for the display pre-applied.

Il design adopted by Huawei for this Mate 9 takes up the good visa on the predecessor Mate 8, with the addition of some details, first of all the dual rear camera.

Except for the contained plastic bands for the antennas, the shell It is entirely assembled in metal and it turns out finely treated and with one good attention to detail, while not offering nothing innovative or original (which is not necessarily an absolute evil). Notice how the back is satin, while on the sides the metal is brushed: small details that denote the good work done by Huawei. 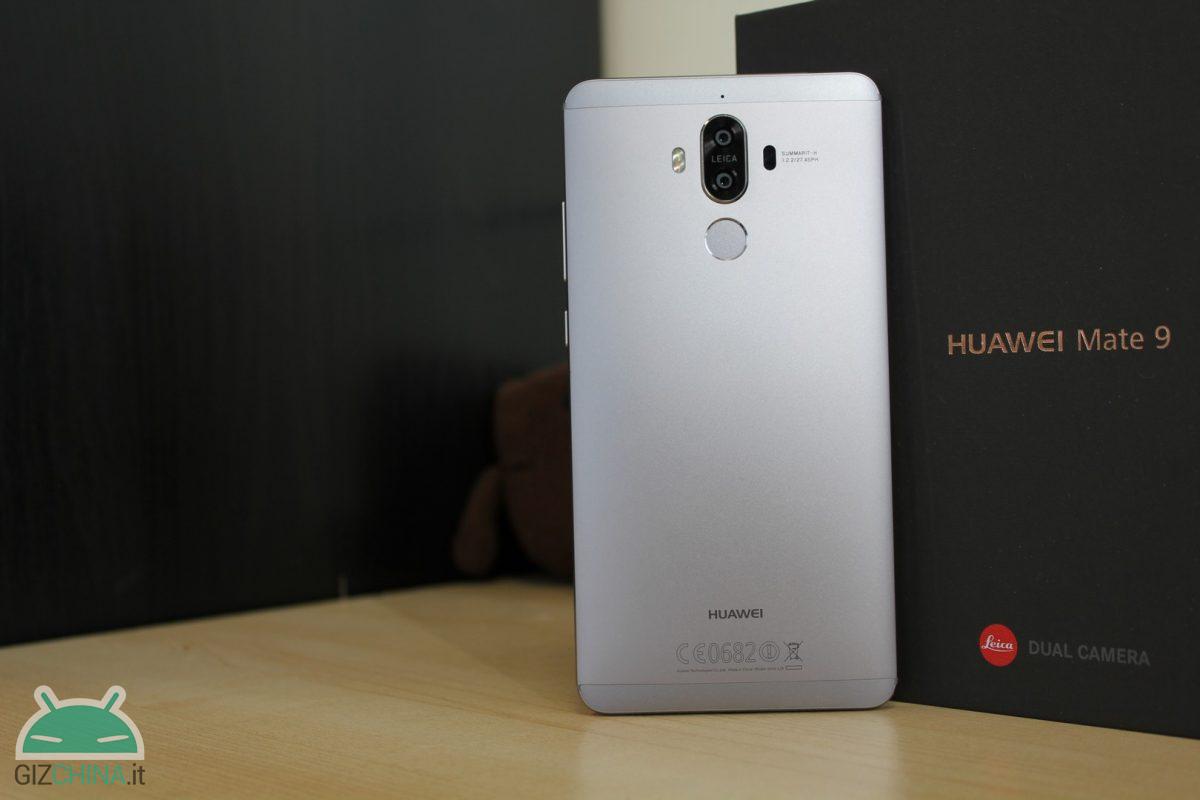 Although it is quite slippery, the convexity of the back cover definitely helps the grip. Although we are talking about a device from the generous display, the size of 156.9 x 78.9 x 7.9 mm and a well distributed weight of 190 g make Mate 9 one of the best phablets from an ergonomic point of view. 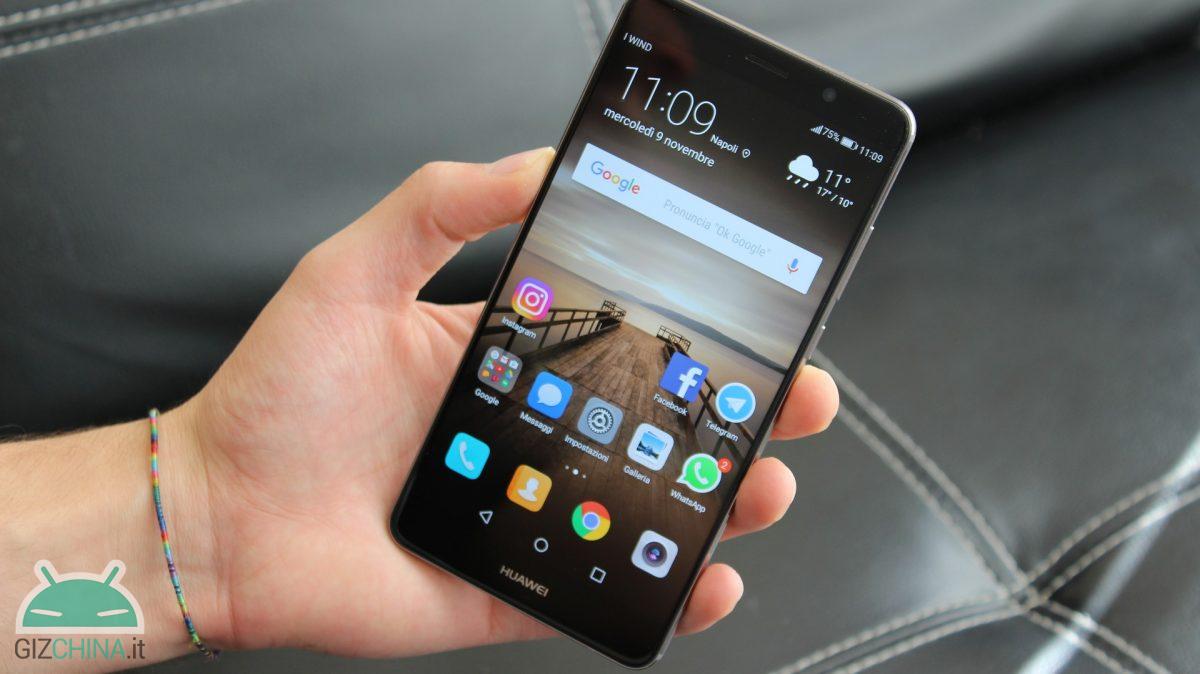 Le frames side are present but reduced, in order to avoid involuntary touches during theuse with 1 hand, which is also facilitated byappropriate option can be activated via lateral swype on the softkeys, both for the entire interface and only for the keyboard.

Analyzing the terminal, on the right profile we see the Power button and the volume rocker, unlike the left one where the Dual Nano SIM / microSD slot.

The mini-jack and the entrance are superior IR sensor, while below the USB Type-C input, the speaker and the microphone are positioned, assisted by the secondary one placed in correspondence with the upper plastic band in the back. Present obviously the RGB notification LEDs, placed at the top on the front of the device.

Also in the front there are the aforementioned keys to the displaywhich may be notifications inverting the position of the Back and Multitasking button and adding the button to pull down the notification curtain.

On the back, the fingerprint reader at 360 ° of Huawei Mate 9 results very reactive e accurate, having a very high unlock rate and among the best in the industry.

In addition to unlocking the device, the sensor can be used for pull down the notification curtain, take pictures and scroll through the gallery, answer calls and stop the alarm. If this were not enough, it is possible too to encrypt various files and apps, in order to further protect your privacy. 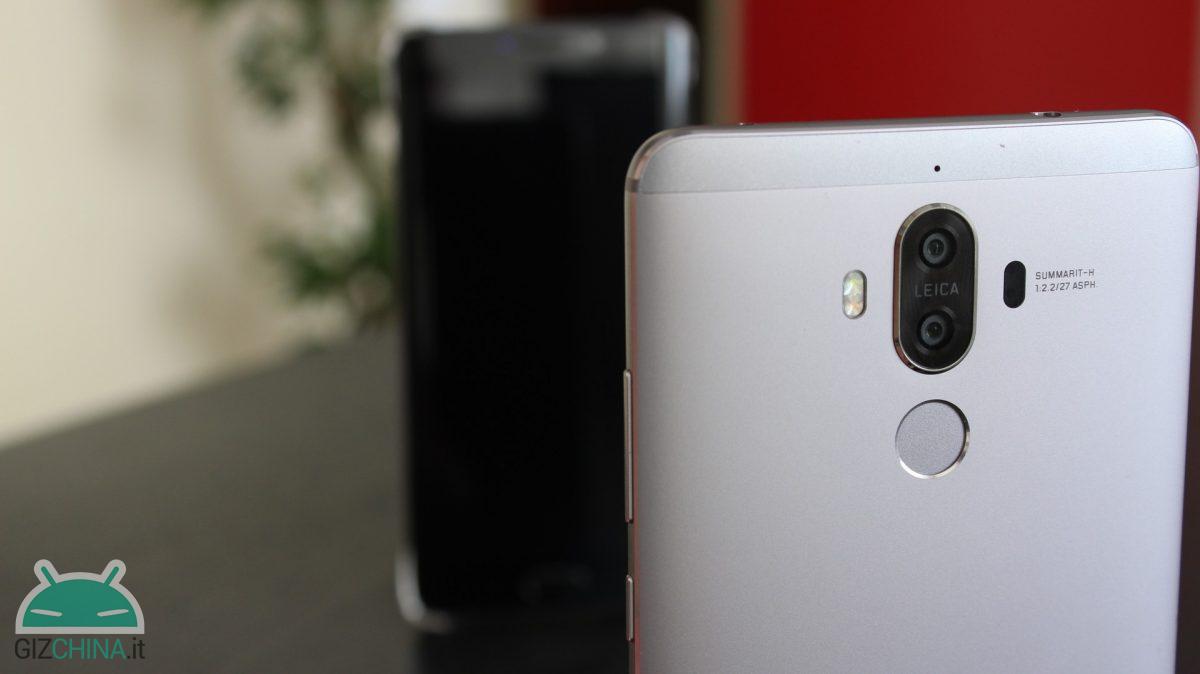 On board the Huawei Mate 9 we find a generous display from 5.9 inches diagonal with resolution Full HD 1920 x 1080 pixels and a density of PPI 373. Being a smartphone "Daydream Ready"The producer could have pushed up to the Quad HD, but going at the expense of autonomy. Also present a slight curvature 2.5D on the edges. 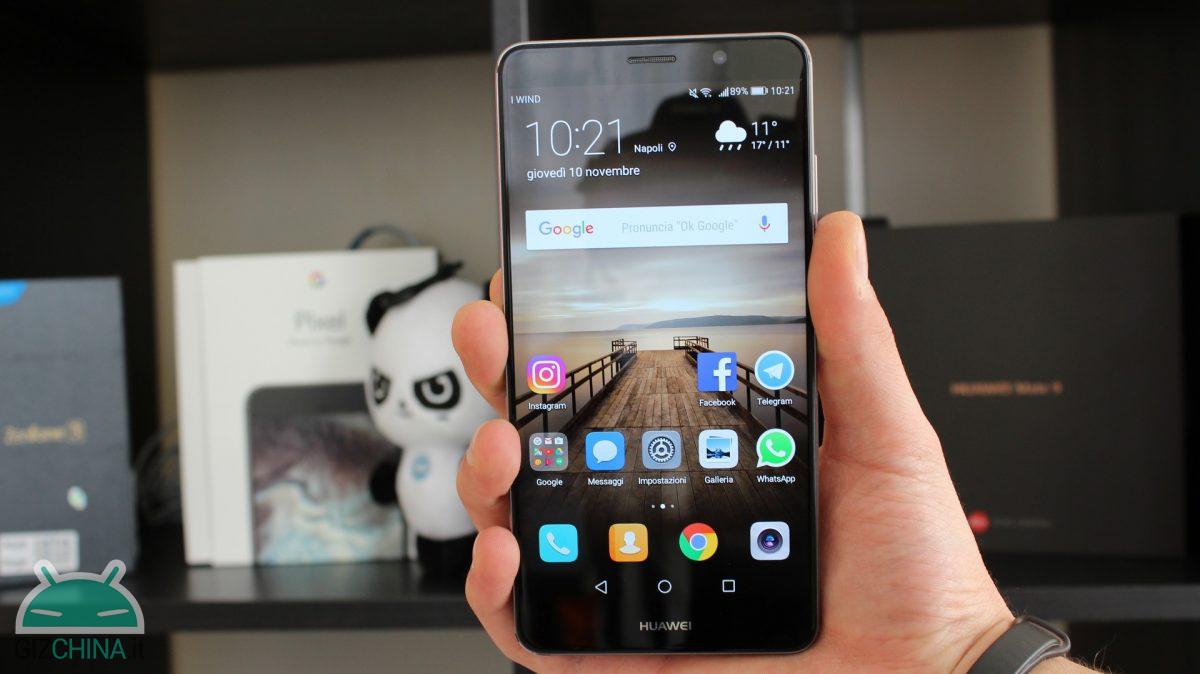 The technology used is IPS, thanks to which you can enjoy a excellent white balancewhich is also adjustable using the "Color Temperature" option. Reproduction of the chromatic range è very faithful, with vivid colors but never too saturated. Wanting to be picky there black perimeter frame it could have been avoided, although in the Space Gray coloring it is practically imperceptible.

Very good also there maximum brightness as well as that minima, whose values ​​are facilitated by the trustworthy automatic sensor. In order to further strain your eyes, there is also the option "Eye protection"With which to filter the blue lights at night.

On the occasion of the launch of the Mate 9, the producer decided to show off his own know-how, since one of the main innovations introduced by the Mate 9 is definitely the hardware compartment.

With the arrival of the flagship, in fact, the new HiSilicon also debuted Kirin 960, which brings numerous performance improvements. Specifically, we are talking about a processor octa-core with 64 bit architecture: 4 x 2.4 GHz A73+ 4 x 1.8 GHz A53. The CPU is also joined by the i6 co-processor.

Thanks to the new Cortex-A73, ai 4 GB of RAM LPDDR4-1800 dual channel and ai 64 GB of internal memory UFS 2.1 (expandable up to 256 GB) the terminal is a splinter, performing every operation required in a few fractions of a second, whether it is wandering between the various menus or during more demanding operations. Truly a good job from Huawei. 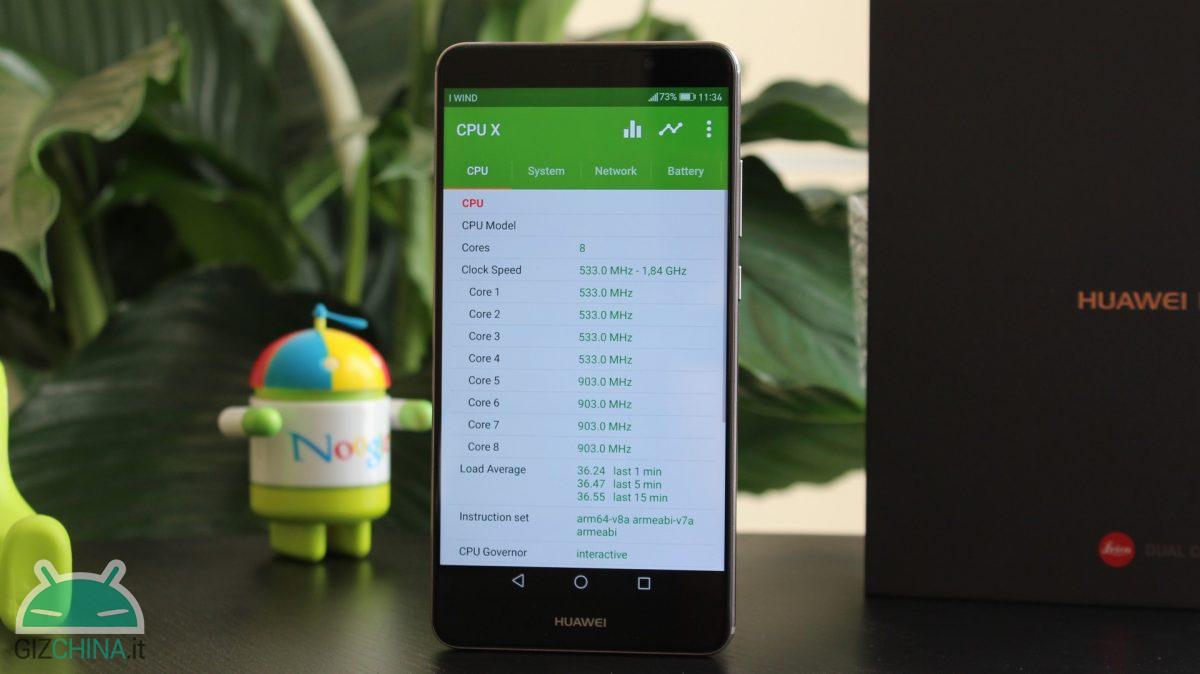 No problem as for the web browsing with the default browser (i.e. Chrome) and the video playback, with support for files in 4K.

The graphic part is instead entrusted to the unprecedented GPU ARM Mali-G71 MP8, a good step compared to the previous one Mali-T880 MP4 of the previous ones Mate 8, P9 e P9 Plus, since in the gaming phase it is possible to notice something extra, even if the performances that are achieved are not entirely equivalent to other top of the range on base Snapdragon 821, Exynos 8890 ed Apple A10 Fusion.

Together with the hardware, also the photo gallery represents one of the key features of the 9 Mate.

To be precise, we later find one dual rear camera, in some ways similar to the one on the P9 series and others different. In fact, we have a sensor RGB da 12 mega-pixels with OIS and opening f / 2.2 along with a monochromatic from 20 mega-pixels, all again co-engineered by Leica. 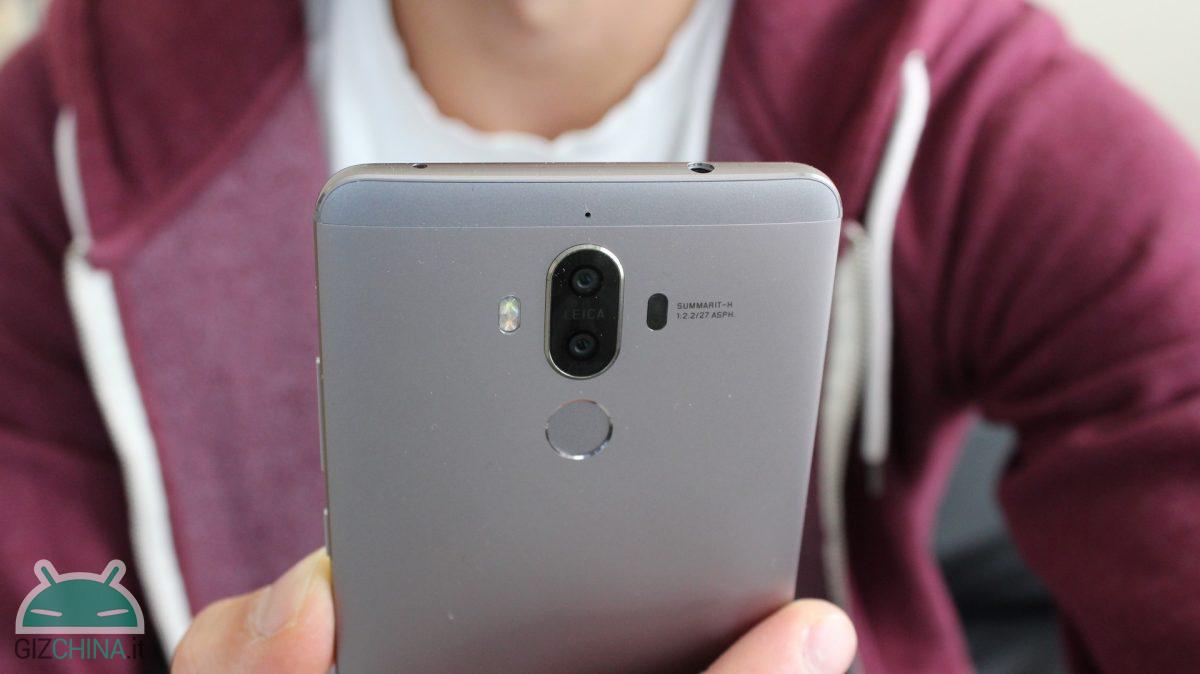 You can then take shots B&W at 20 mega-pixels and shots standard to 12 mega-pixel. However, through software interpolation, you can also shoot color photo in 20 mega-pixel, but no zoom is possible during shooting.

And just about that, another interesting feature is a kind of "2x" optical zoom, which is simulated through software all in all, well done. From 2x to 4x, however, you will get a fully digital zoom (albeit well done). 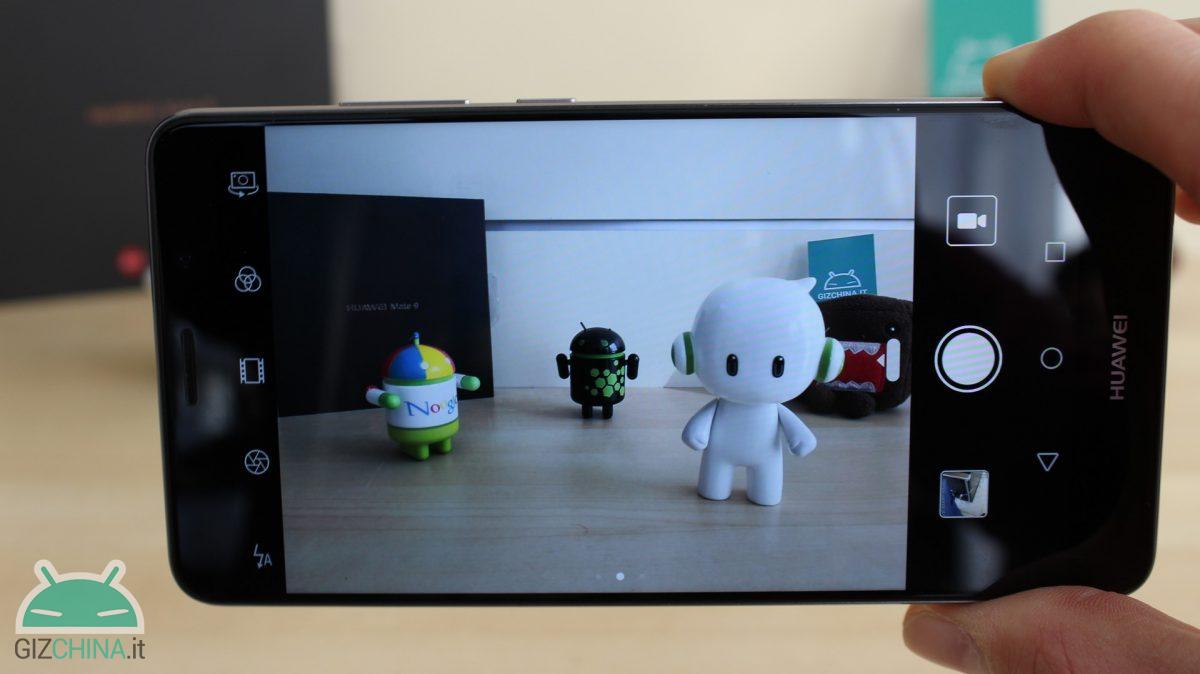 In conditions of good brightness the shots are good, especially as regards the macro. Good color reproduction during the day, while in the evening the sensor seems to suffer slightly.

Nothing to criticize regarding the front camera which makes quality shots, even if in low light conditions, what was said above is repeated.

L'audio supplied by Huawei Mate 9 is conveyed via the lower speaker, which deals with almost entirely managing the frequency range, together with headset capsule, from which the high frequencies come out, as seen on other competitors such as LeEco Le Pro 3, Apple iPhone 7 but also the same Huawei P9 Plus. As for the latter, in fact, by rotating the device in mode Landscape the audio will be played in mode stereo.

The result is convincing if it is about watching videos and films, given theexcellent stereo effect and high volume, but sinning in quality. Obviously through thelistening in headphones the situation it improves sharply. The quality of capsule calls is also good.

With this variant of Huawei Mate 9 we find the support dual Nano SIM 4G with LTE Cat.12. The reception It's really excellent, by hooking the signal even in difficult areas and allowing a speed of navigation under the data network always satisfying. Present the possibility of using diversified ringtones and activate / deactivate the vibration for each of the 2 SIM.

Ditto regarding connectivity Wi-Fi ac Dual Band. The department completes the Bluetooth 4.2, NFC and sensor IR. Navigation satellite is guaranteed by GPS / A-GPS / GLONASS / Galileo / BDS sensors, with a always responsive signal fix and a good precision thanks to the integrated compass.

The phablet software is based on the recent one Android 7.0 Nougat, managed by the new version of the proprietary interface EMUI 5.0, updated both in looks and functions.

The first advantages derive from the new release of Android, thanks to which new features are integrated, such as the possibility of carrying out split-screen through Multitasking, switch between the latest 2 open apps by clicking 2 times on the Multitasking e button customize quick toogle.

A note should be made for the notifications, which come indicated in the upper bar only numerically, without specifying what app it is. Too bad, given that on other Huawei products the specific chat icon from which the notification arrives is even displayed.

Among the installed apps by default we find the Temi and the suite Wellness to set up the pedometer, visible in the lock screen.

Sono really a lot of settings present. In addition to those already listed during the review, here are the most useful:

A separate discussion must be made for the concept of Machine Learning. During the presentation, the company focused a lot on this aspect, explaining how the software analyzes the user behavior for consequently optimize the system, in such a way that allocate more resources for the operations performed more frequently, learning to understand the needs of the user. However this is an aspect impossible to evaluate now, as it is a factor eventually appreciable in the coming months of use.

While offering one limited thickness, within the Huawei Mate 9 is implemented a battery from 4000 mAh non-removable, which thanks to the well-optimized software manages to deliver good results. In fact with a medium-intense use it will be possible to make about 5 hours of active screen.

The complete recharge is carried out in approx 1 hour and a half thanks to the excellent quick charge system super charge.

As you will have understood this Huawei Mate 9 it is undoubtedly a very interesting product, especially at a performance level, given the extreme reactivity of the hardware compartment, combined with a software almost perfect developed by Huawei.

Of course the flaws are not lacking, especially considering the price of 749 € not for everyone, but considering that phablet with these dimensions and performance are almost absent on today 's market, surely you will not regret buying the Huawei Mate 9. 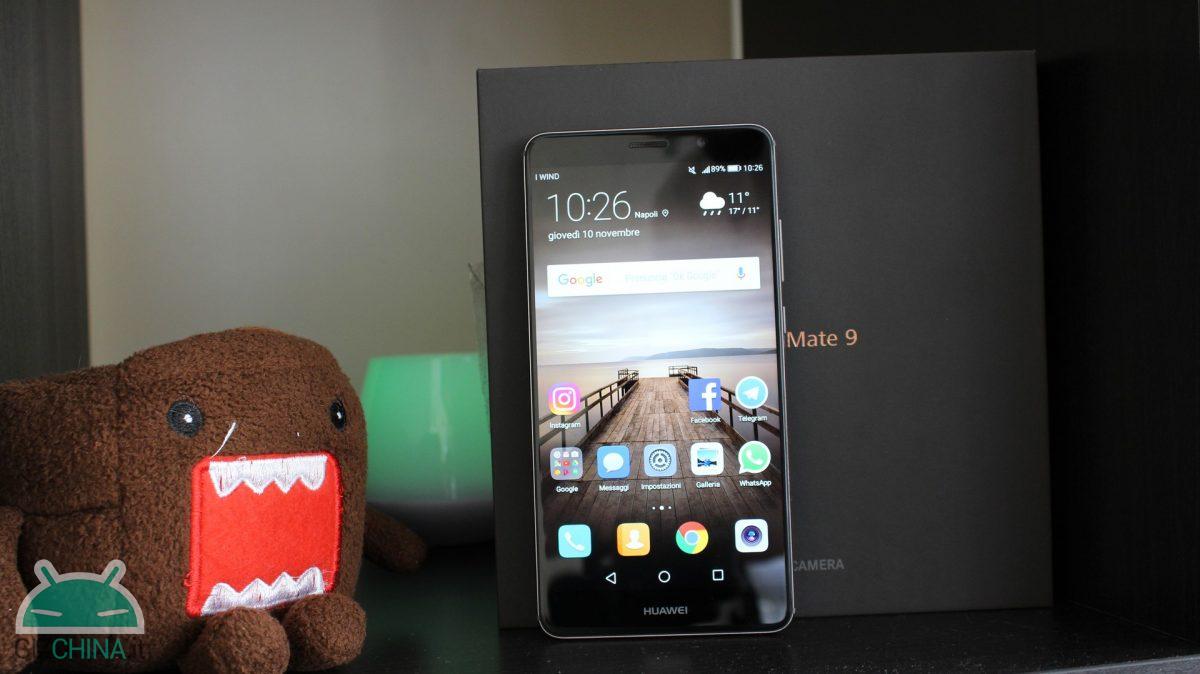