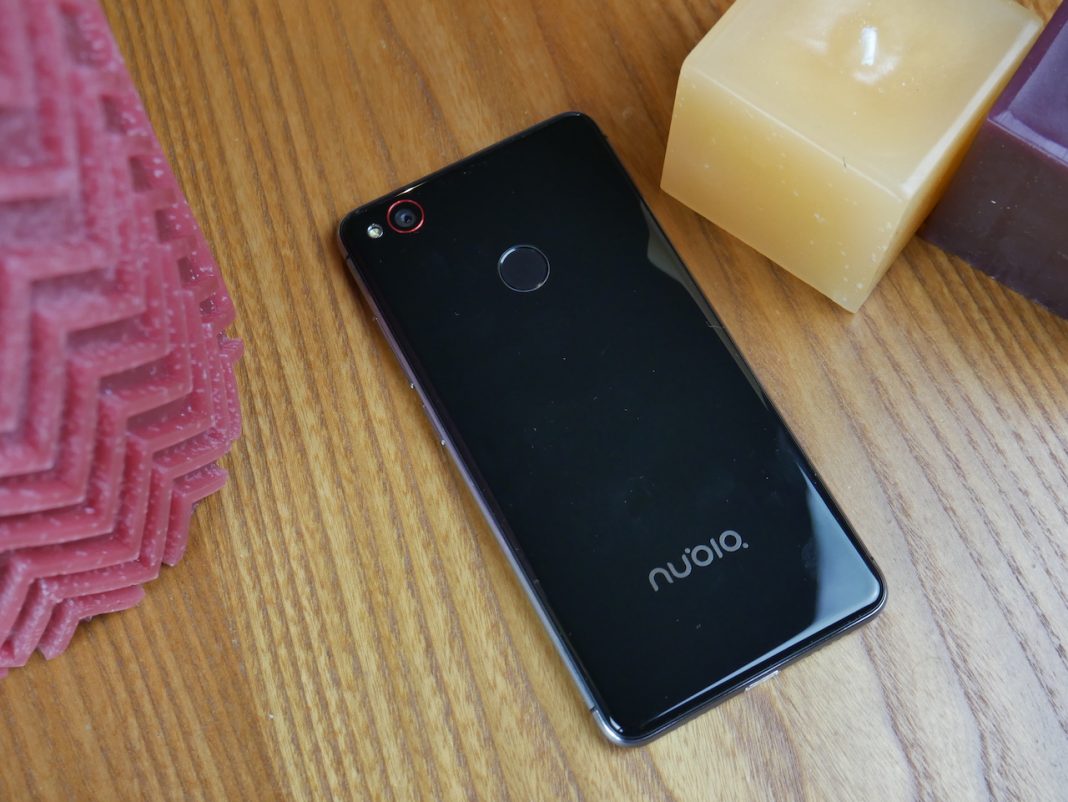 You will probably remember that in June we had proposed it to you review of Nubia Z11 Mini in the Asian version. During IFA 2016, the brand Nubia, in addition to having presented his flagship Universal Z11, has formalized the landing on the Italian market, and among the devices sold in the beautiful country we also find the Nubia Z11 Mini International.

A mid-range device with an excellent construction, a good technical data sheet and much more: discover it inside ours Full review! 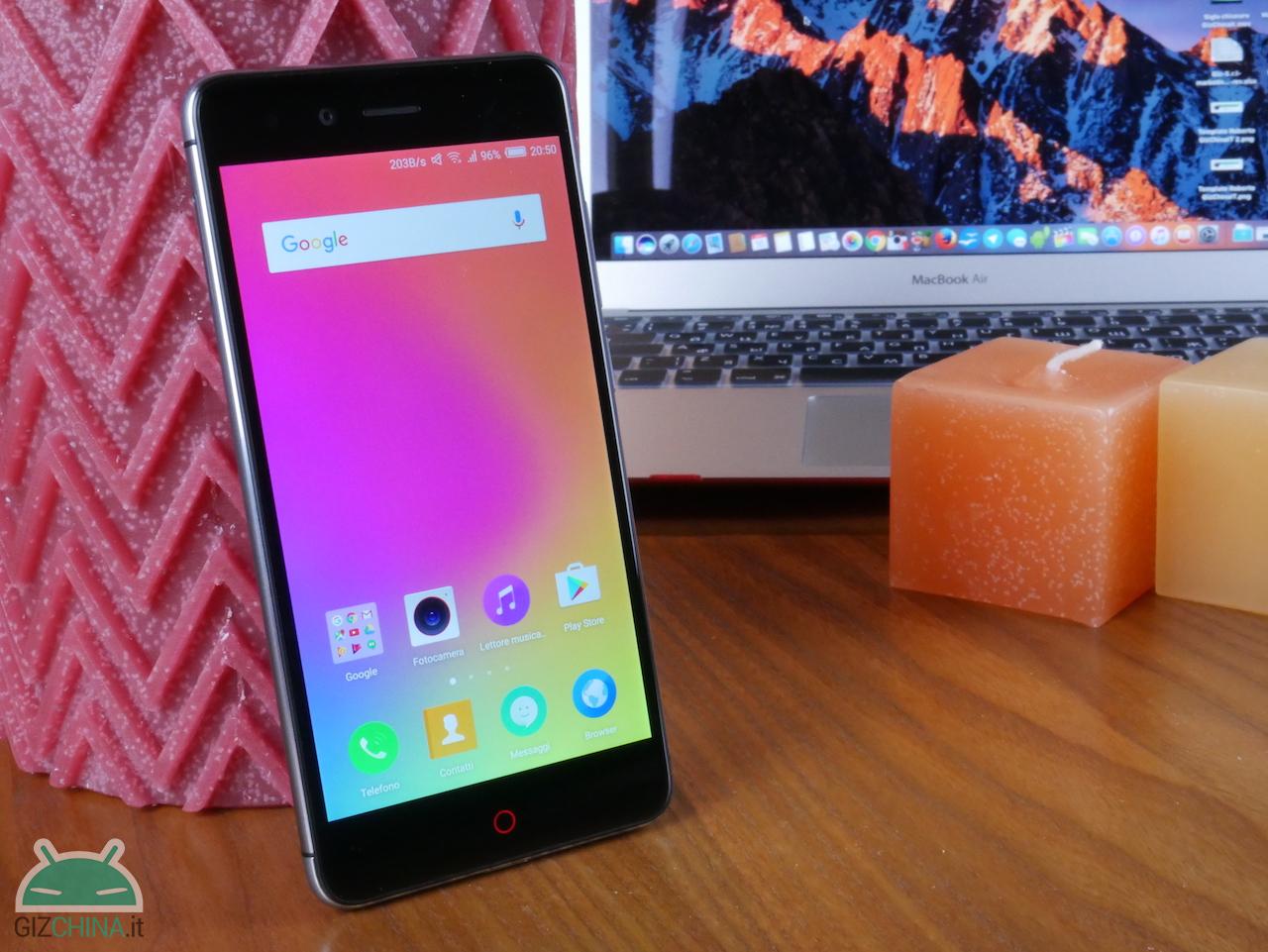 La package in which the Nubia Z11 Mini is shipped contains the bare essentials, namely: 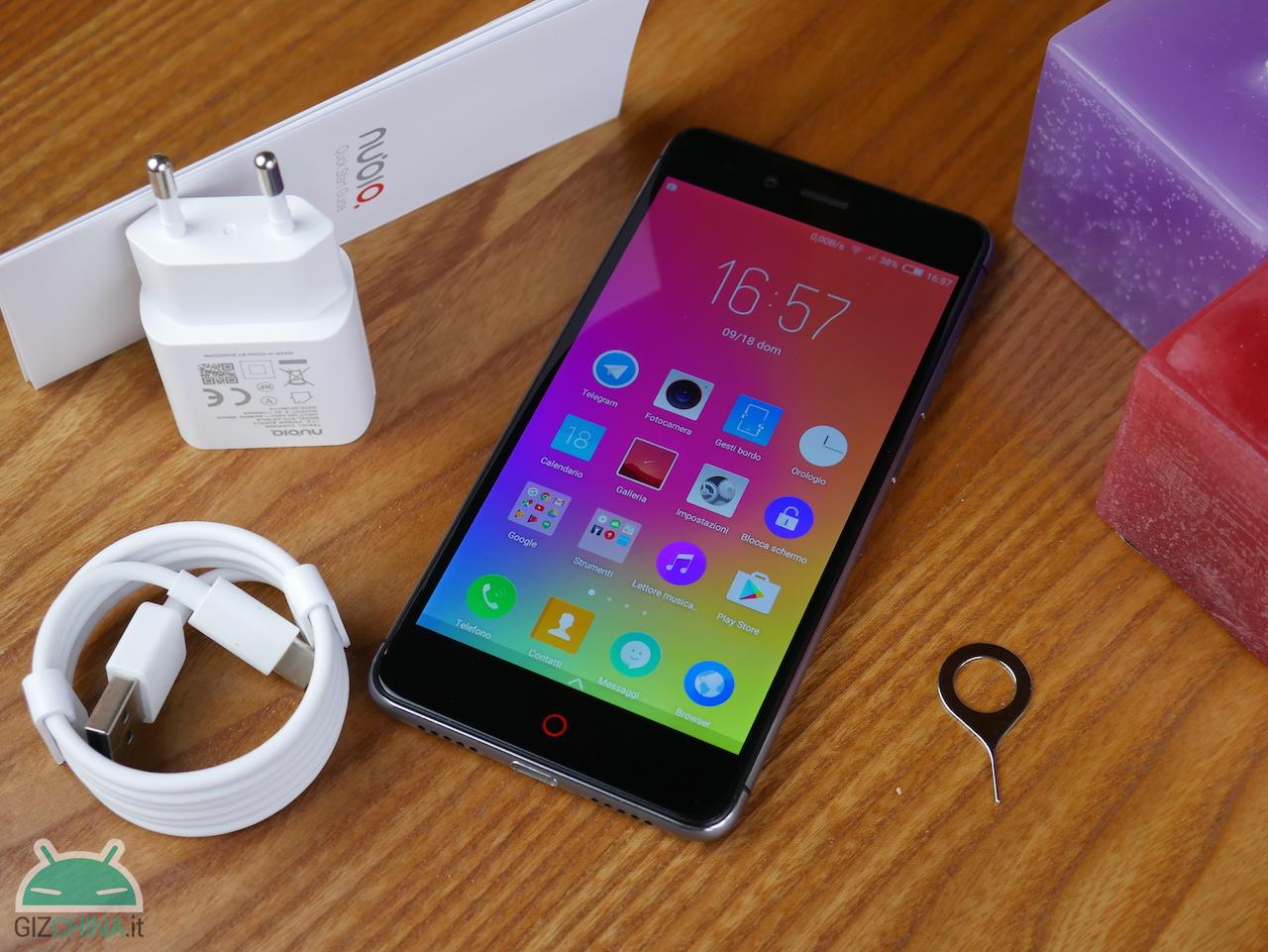 We have learned to know the Nubia products always distinguished by one very careful construction, and this Z11 Mini confirms it.

La shell, made in glass and metal, it turns out elegance e finely treated, and the Black color makes it a small design object. We can see how along the entire edge of both the back and the front there is a very fine plastic insert, which allows the correct functioning of the antennas. 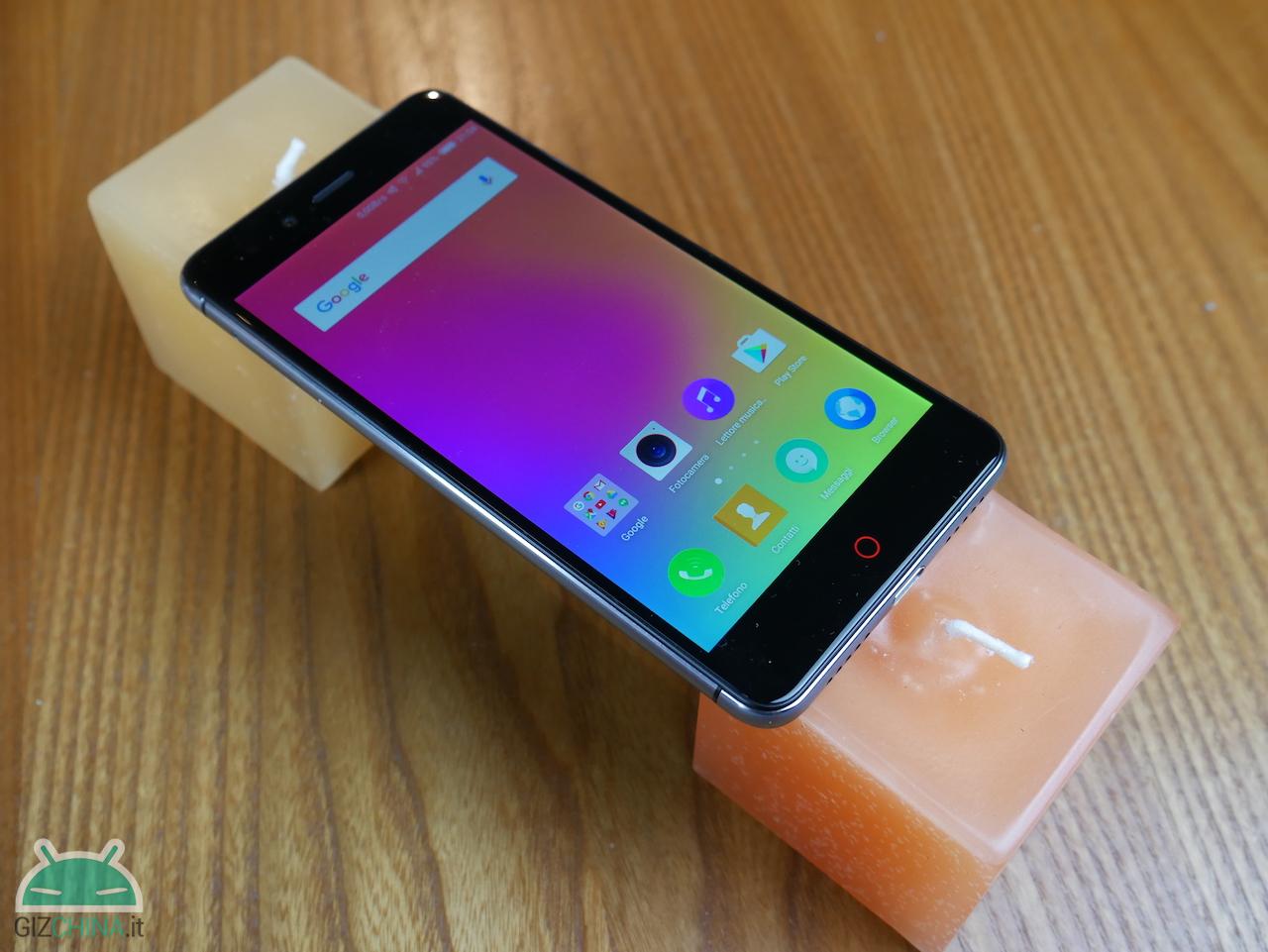 Centrally, in the upper part of the back cover, we find the fingerprint reader touch and 360 °, From 'excellent functioning in every condition. Quick to unlock the device and always very precise in the recognition of the fingerprint. Very useful gestures through it, thanks to which we can take pictures, carry out one screenshot e block app.

In addition to it on the back we find the main camera from 16 mega-pixels, flush with the body and protected by a glass in sapphire, with the classic red ring to embellish it, with annex LED flash in single shade and the company logo placed under the glass layer. 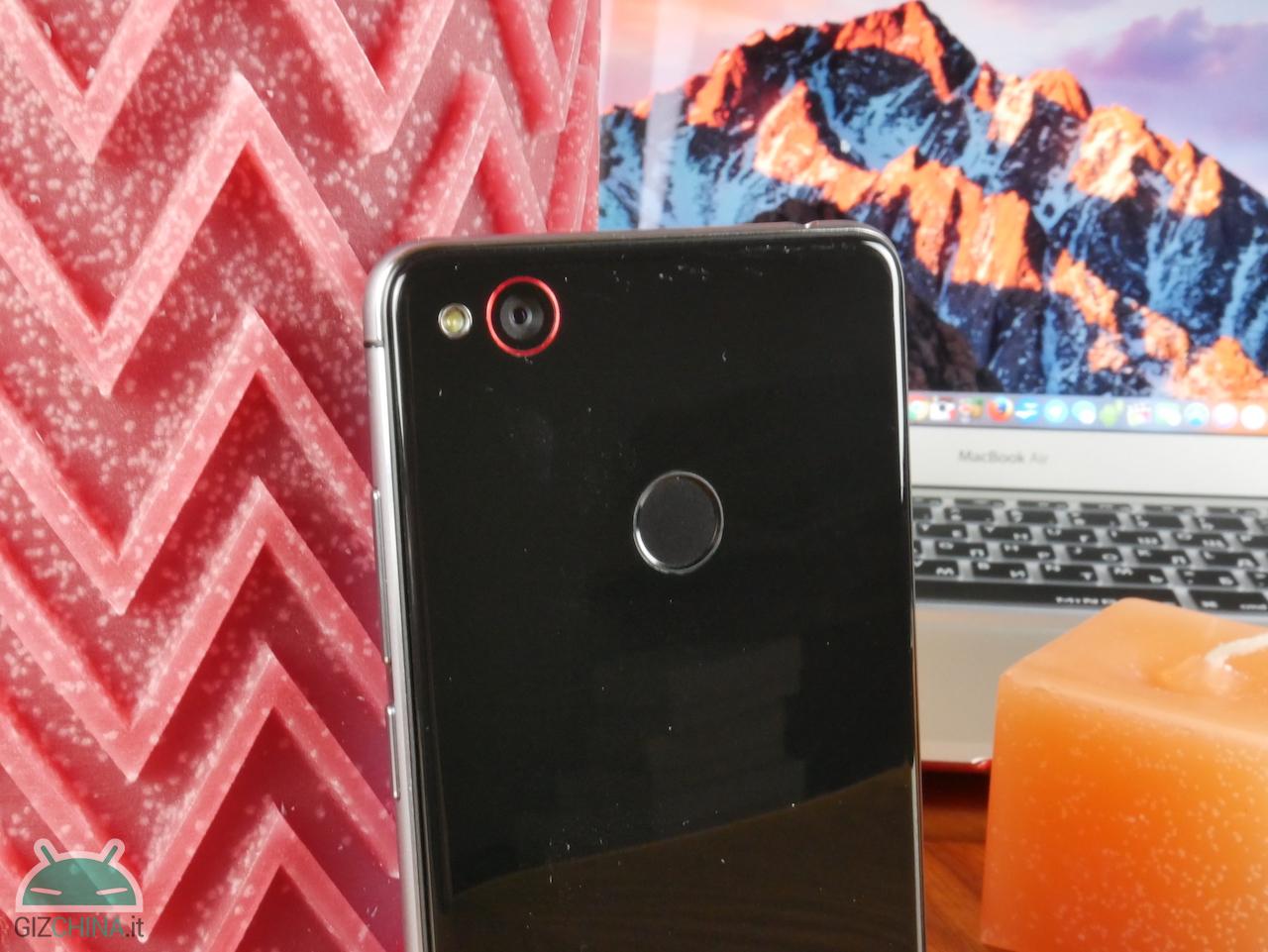 Looking at the metal side frame, on the right we find the Power button and the volume rocker arm, set in a small milling, while on the left we see the Dual SIM / micro SD slot.

The entrance is located on the lower side USB Type-C, the system speaker and the main microphone grid, assisted by the secondary one placed at the top together with the 3.5 mm mini jack input.

As for the front, below are located i 3 capacitive keys (can be set as Menu / Home / Back or Back / Home / Menu), whose central key also acts as a LED notification, which by default only indicates system notifications (missed calls and received SMS), as well as lights up during the charging phase.

To enable lighting for third-party apps, there is a special panel, from which we can choose, app by app, which notifications should also appear on the lock screen. Too bad for the absence of color adjustment. Present on tactile feedback rather soft in the answer.

Always frontally, at the top, the front camera from 8 mega-pixels flanked by a LED flash, together with the ear capsule and the brightness and proximity sensors, whose operation is always reactive.

Ergonomics is facilitated both by the small dimensions and by the curvatures present front and back, which, in addition to giving the design a sinuous appearance and modern, they help the grip during the handle. Furthermore, the glass construction it is not particularly slippery and has no "soap" effect when the device is placed on a plane. 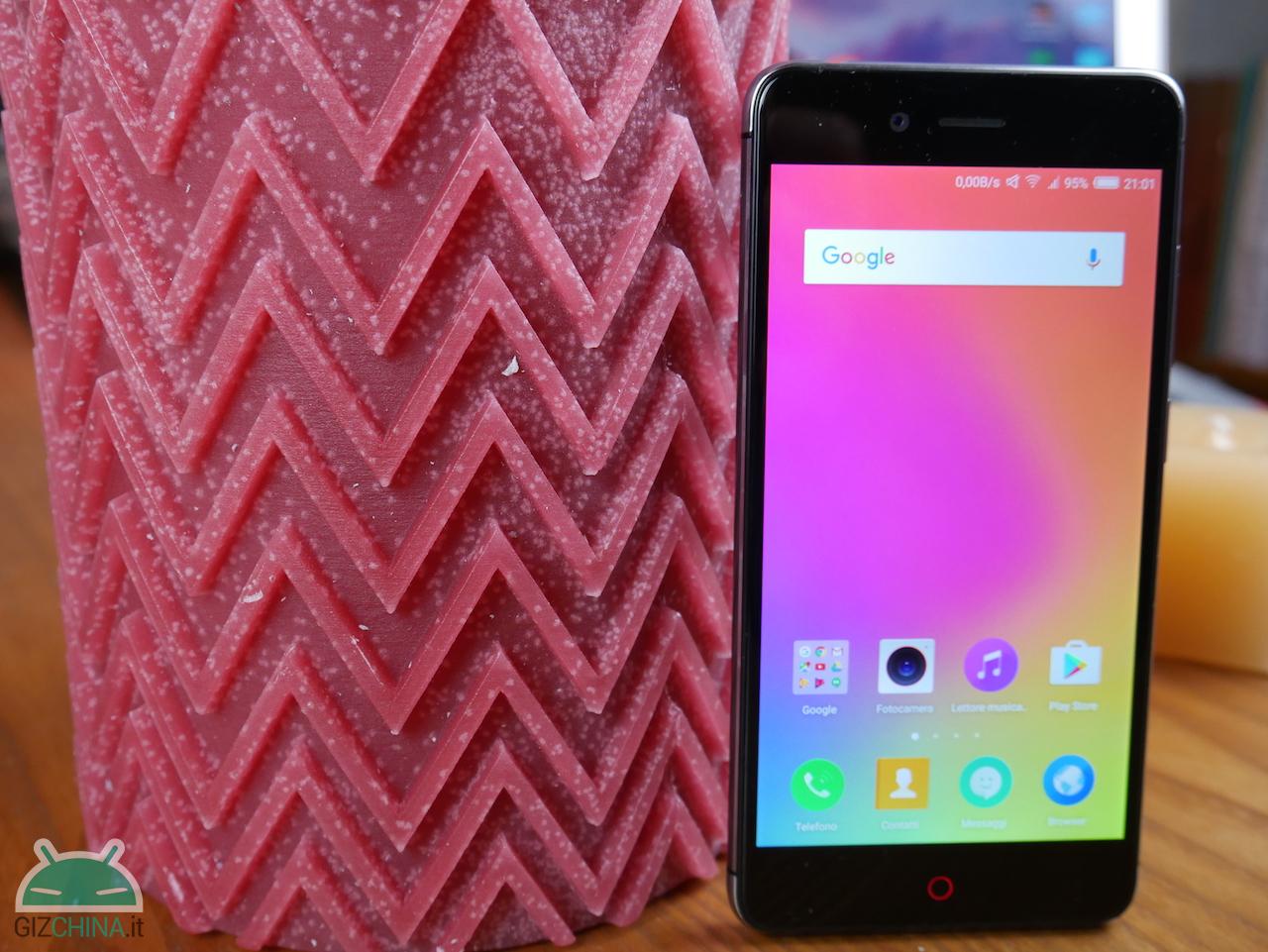 I colors are bright, but not excessively saturated, good compromise between fidelity of chromatic range e vivacity dell 'image.

In addition, within the settings menu you can choose between 3 different profiles is preferably used for saturation e 3 profiles for the white balance. By tilting the display you can see a slight color change, nothing but questioning the excellent unit adopted by Nubia for this device. 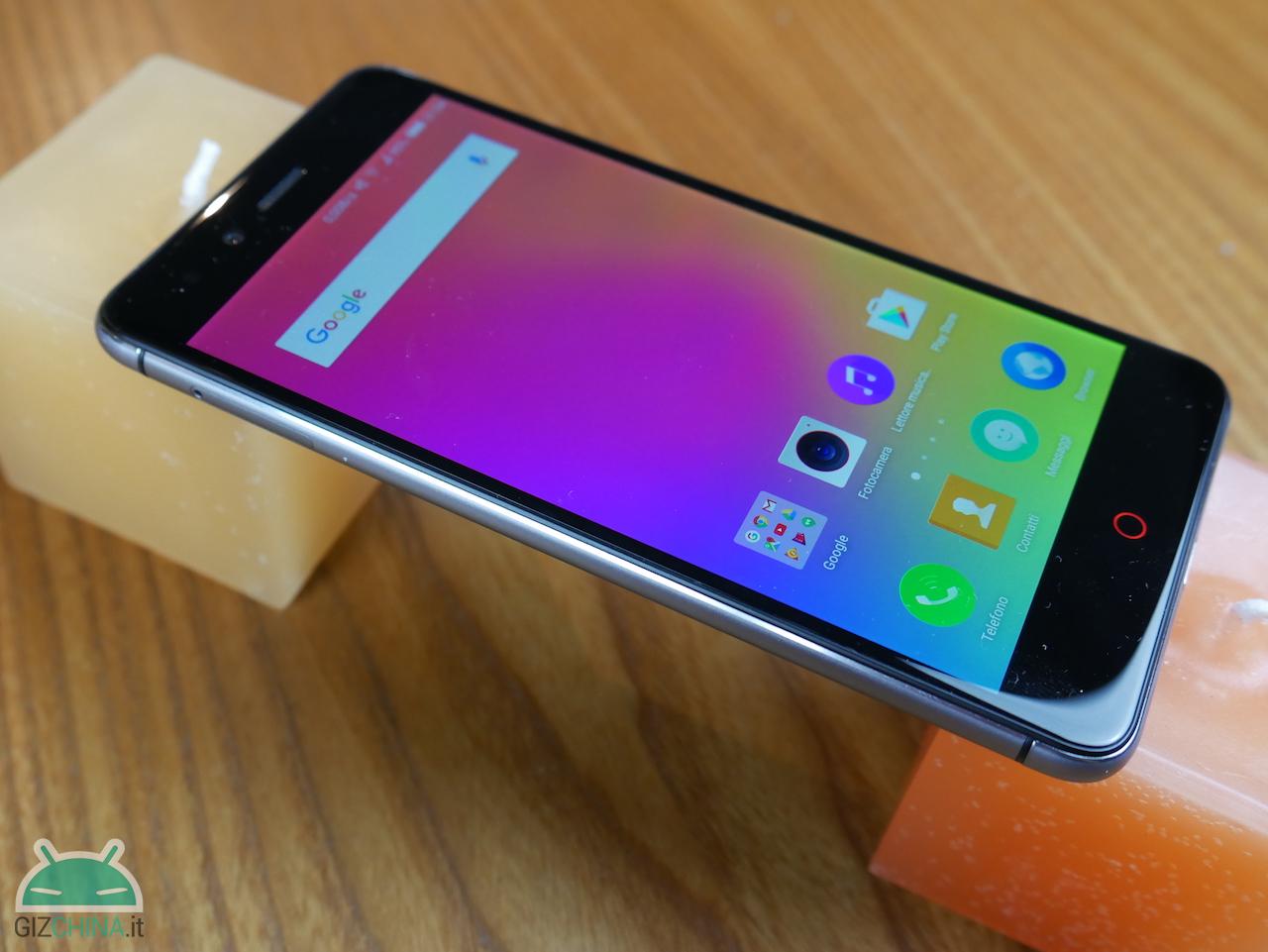 Very good i values di maximum and minimum brightness, facilitating reading both under sunlight and in the dark. Also noteworthy is the behavior of the touch screen a 10 touches simultaneous, always responsive. The oleophobic treatment è good (but not excellent) and the reflectivity factor. Furthermore, regarding the construction, we point out the presence of a glass Corning Gorilla Glass 3 with elegant curvature 2.5D. 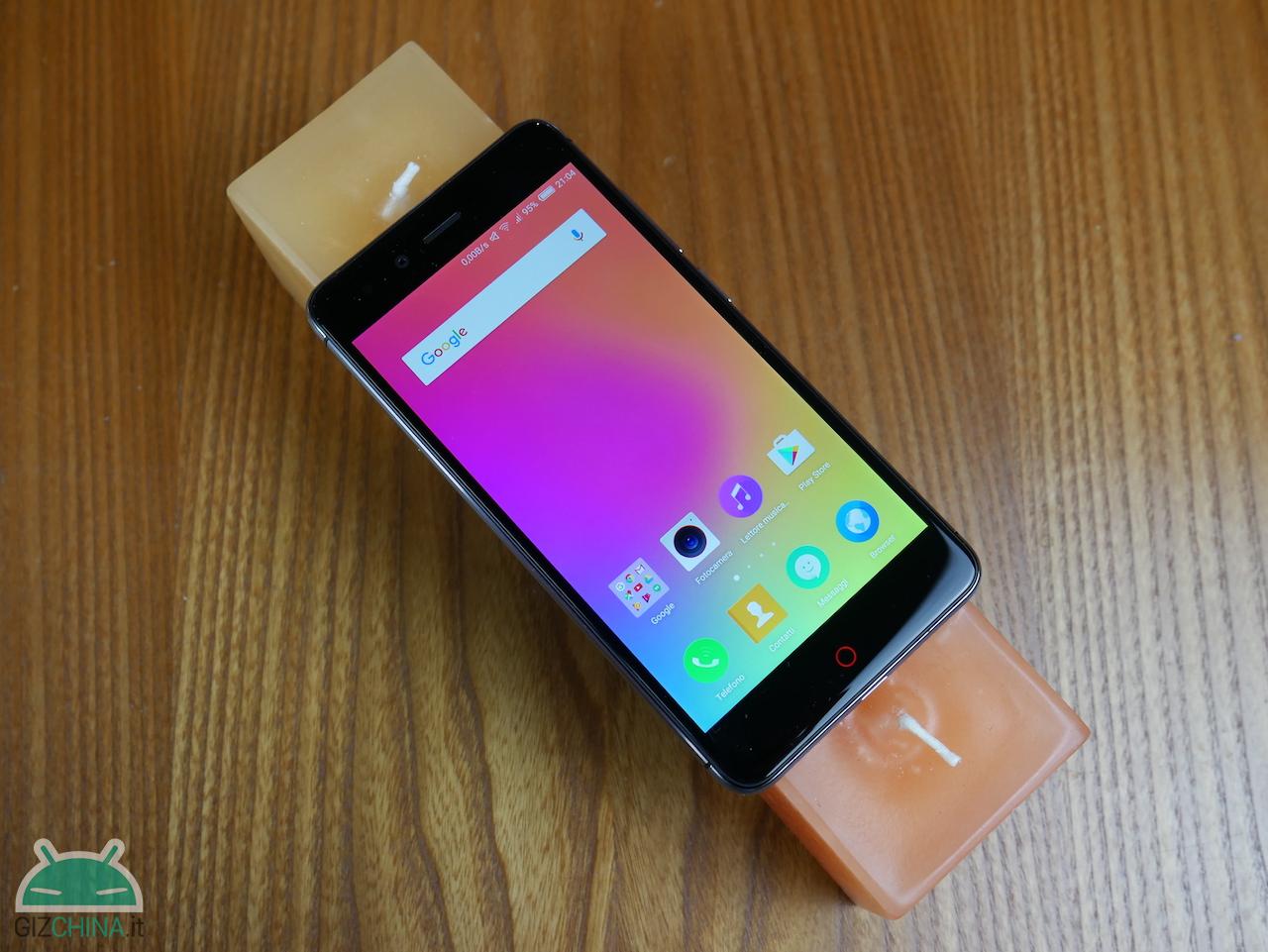 Although the diagonal of the display is only 5 inches, the option is present Screen split-up, thanks to which it will be possible to divide the display into 2 separate sections on which we will have the Home itself.

Another gem of Nubia concerns the gestures, more specifically the function Edge slide. With one swype on the right and / or left edge of the display you can perform the following operations:

On the Nubia Z11 Mini International the Qualcomm platform remains unchanged, that is Snapdragon 617 MSM8952.

The management of the graphic sector is entrusted to the GPU Adreno 405, with which thegaming experience gets a very nice frame rate even with demanding games like Asphalt 8 e Real Racing 3 set to medium details, and even setting the details to maximum the frame rate always remains above 30 fps.

On board we find then 3 GB of 3 MHz single channel LPDDR933 RAM, with which there are no particular problems during the multitasking. Finally, the internal memory integrated here is from 32 GB of type XMMUM eMMC, expandable through micro SD to 200 GB. Option available OTG.

No problem with the ripvideo breakdown, although files are not supported 4K, of which only the audio is played. There web browsing with Google Chrome it happens in a manner validates and functional enough not to be annoying.

We have not noticed any particular problems with overheating during normal daily use. Clearly in circumstances of more stringent use, such as prolonged gaming sessions or long-time display, the temperatures increase but never in such a way as to make the use of the device annoying. 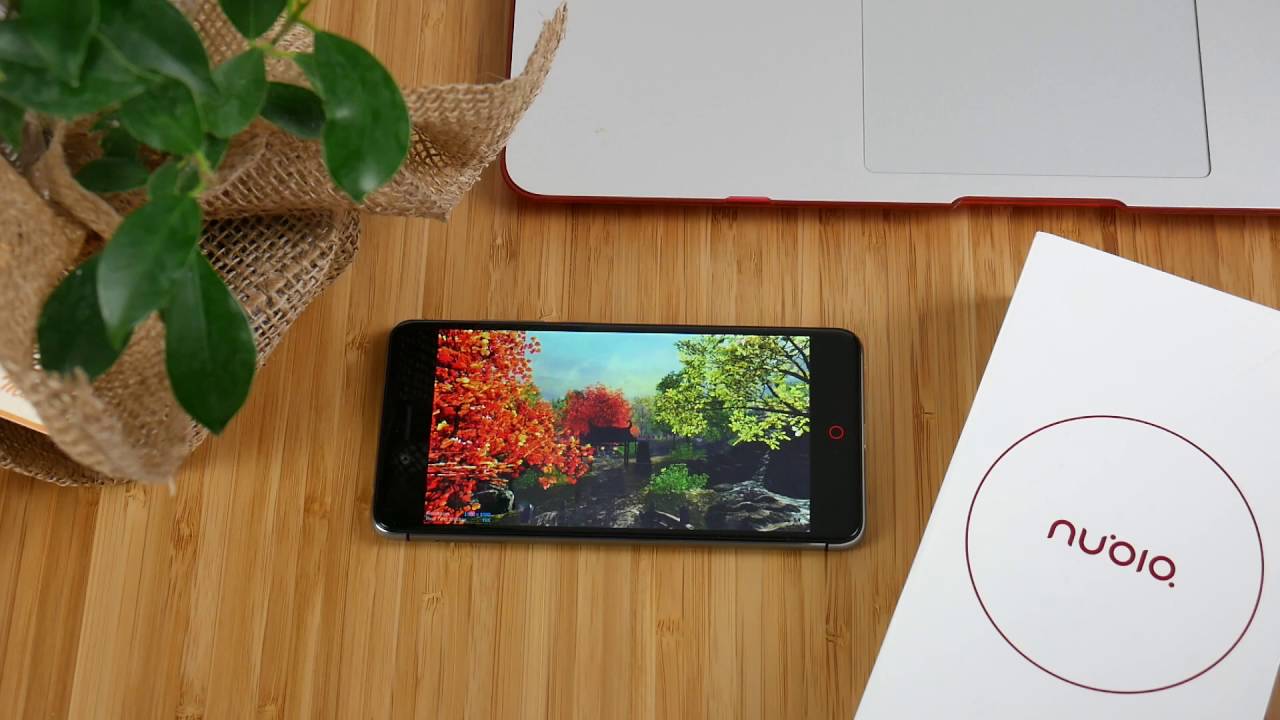 The multimedia sector, specifically the photographic one, of the Nubia Z11 Mini consists of:

During the day and in any case in conditions of good brightness the shots obtained are definitely good. The shots obtained are rich in detail dictated by the size of the sensor. Displaying the photos obtained, on a larger display, you can see how the detail is maintained and the colors are well reproduced, with no particular gradation prevalence.

Very good la mode HDR, thanks to which you can get very impressive shots in the presence of different exposures.

L'autofocus PDAF è fast both in the photographic and in the video. Too bad for theabsence of optical stabilization it is felt especially in the nocturnal phase, in which it is necessary to have a steady hand to avoid blurred photos.

Lo maximum zoom amounts to 6 / 8x (it is not specified) and, as on Mi 5 (which mounts the same sensor) the photos taken are definitely grainy.

Excellent i Selfie made with the front camera, also helped in the dark by the presence of the LED flash.

La quality it's at the same level as the photos, that is more than decent, even if you again notice theabsence of optical stabilization. Also good audio captured by the microphone, in addition, there is the second microphone for the suppression of environmental noise. 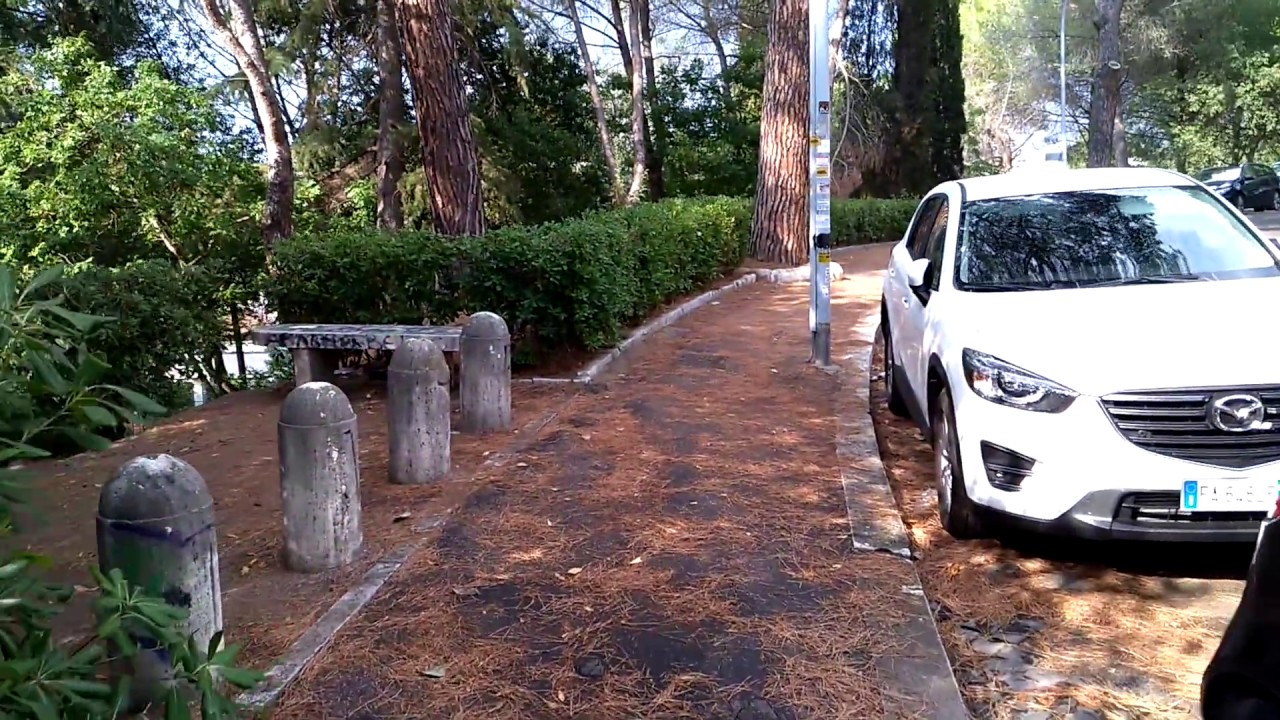 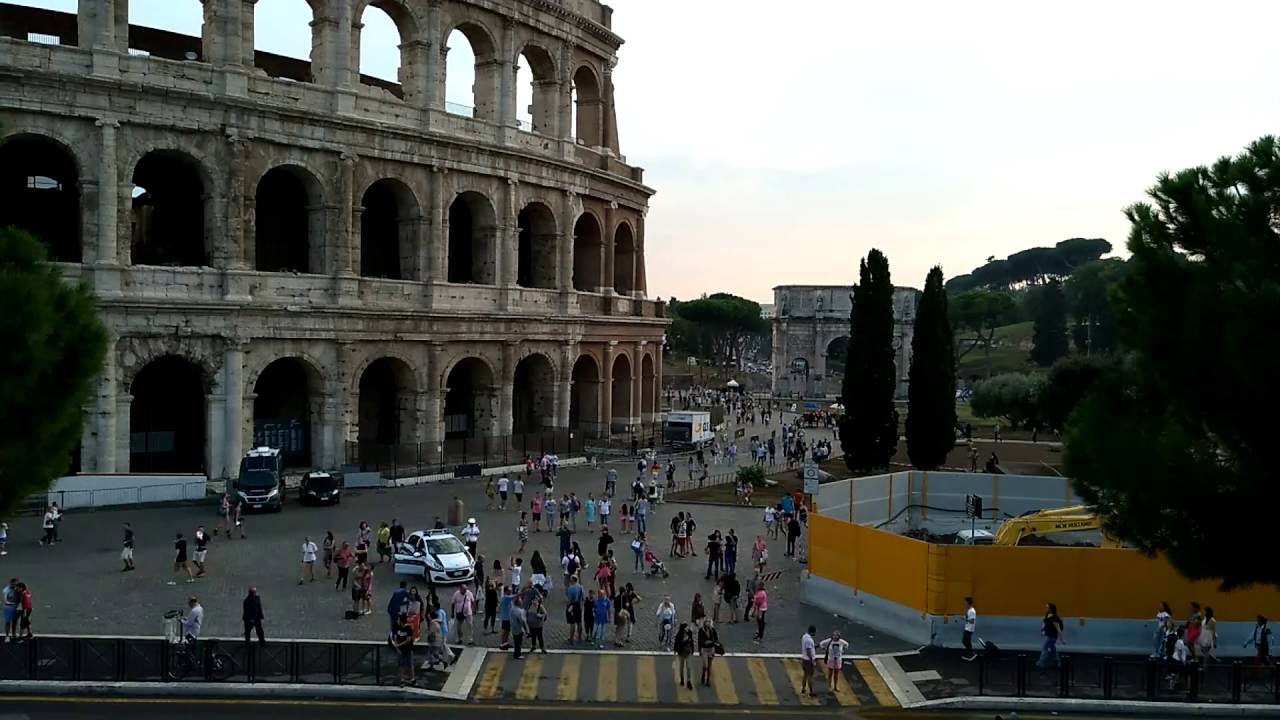 Present, as regards the audio sector, the DTS technology, with which to improve clearly the goodness of the speaker output. Furthermore, you can choose different types of equalization depending on the content we are viewing and / or listening to. 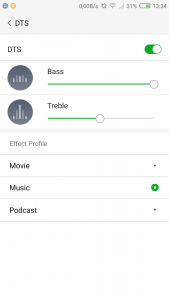 We would have preferred only a slightly higher maximum volume, nothing however such as to compromise the usability of the use in speakerphone and multimedia contents.

The Nubia Z11 Mini International in addition to supporting the dual SIM 4G LTE, with the presence of the Volta, confirms the presence of the much discussed 20 band. Therefore, even Wind users can choose this device without having to worry about any problems for web browsing. The management of the dual SIM is well done, but it is not possible to set different ringtones.

Still remaining in the connectivity department the Wi-Fi of type a / b / g / n / ac Dual Band it behaves well, with a discrete range of use, just as there are no problems whatsoever when using connections Bluetooth 4.1, DLNA and GPS / A-GPS / GLONASS, with a fixed indoors at really lightning-fast windows.

Also for this Nubia Z11 Mini International the onboard software is based on Android Lollipop 5.1.1. The real "plus" of this device is in any case on the interface, customized by the manufacturer, Nubia UI 3.9.6.2.

The great news of this new Nubia Z11 Mini International is full support to Google Apps and Italian language, Already preinstalled. Surely an added value does not give poco: in fact, the ROM it is pleasant in design, well organized, simple in daily use and cleaned up applications for the Asian market.

The excellent gestures are confirmed, among which we find the Double tap to wake, Palm screen lock (turn off the display by covering it with your hand), lo Shake to clear (shake your smartphone to clear notifications and clear the RAM), Flip to mute / pause, Super Screenshot (make long screenshots and / or various forms) and more.

As for the pre-installed apps, there are icons that act as shortcuts allowing to lock the screen, clean the memory by removing the app in the background or have quick access to thesetting of the gestures.

The autonomy of the Nubia Z11 Mini is guaranteed by a battery, not removable, from 2800 mAh.

With intense use under the mobile network you can reach them 3.30 / 4 hours of active display, while with a more bland use, the 4 hours are fairly quiet. 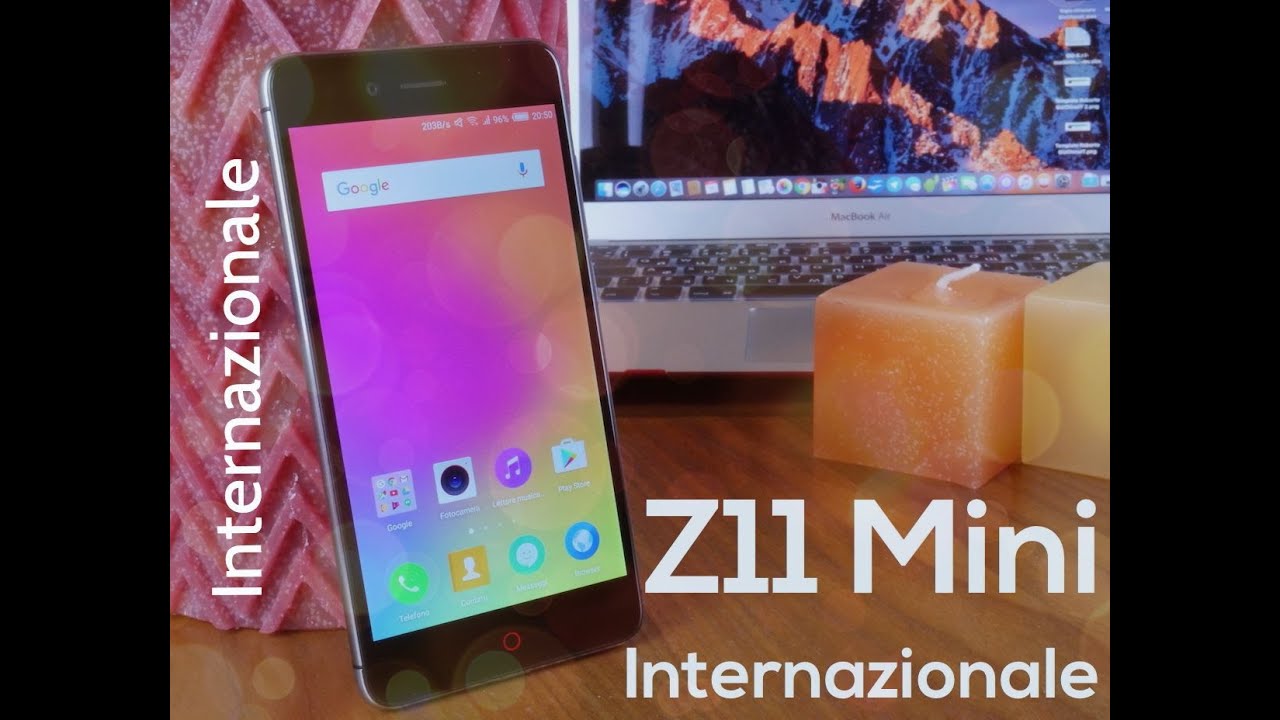 Ultimately the Nubia Z11 Mini International it's a terminal very valid, now even more thanks to ROM dedicated to the Italian market without any kind of problem on the software side, linked to devices destined for the Asian market, applying to be a best buy in their own category.

From the aesthetic point of view it is not discussed, because Nubia has been able to bring out another impeccable device and that does not disfigure alongside the various top of the range. Numerous gestures and the possibilities for personalization that significantly increase the user experience for the end user.

The multimedia sector is excellent, especially for the camera, among the best in this price range, after all I remind you that the sensor adopted by Z11 Mini it's the same as his older brother Z11, but also the same used by OnePlus 3 e Xiaomi Mi 5.

Il Nubia Z11 Mini is available for sale on the official Nubia Italia store at the price of 249 €, including Italy 24 month warranty e shipment from Italy.