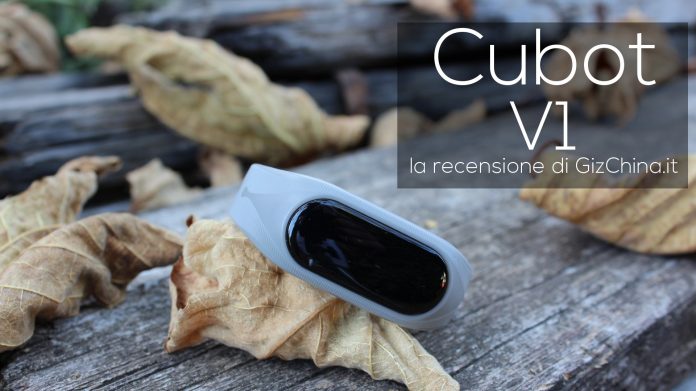 After seeing a few days ago Teclast H30 and have compared it with the Xiaomi Mi Band 2, in today's review we remain in the field of activity trackers and we are going to analyze the first smartband made by the Chinese company Cubot, Or the Cubot V1.

The fact that it is very cheap is one of the reasons why some of you have already heard of it, but let's not lose ourselves in chatter and let's see it in our full review. 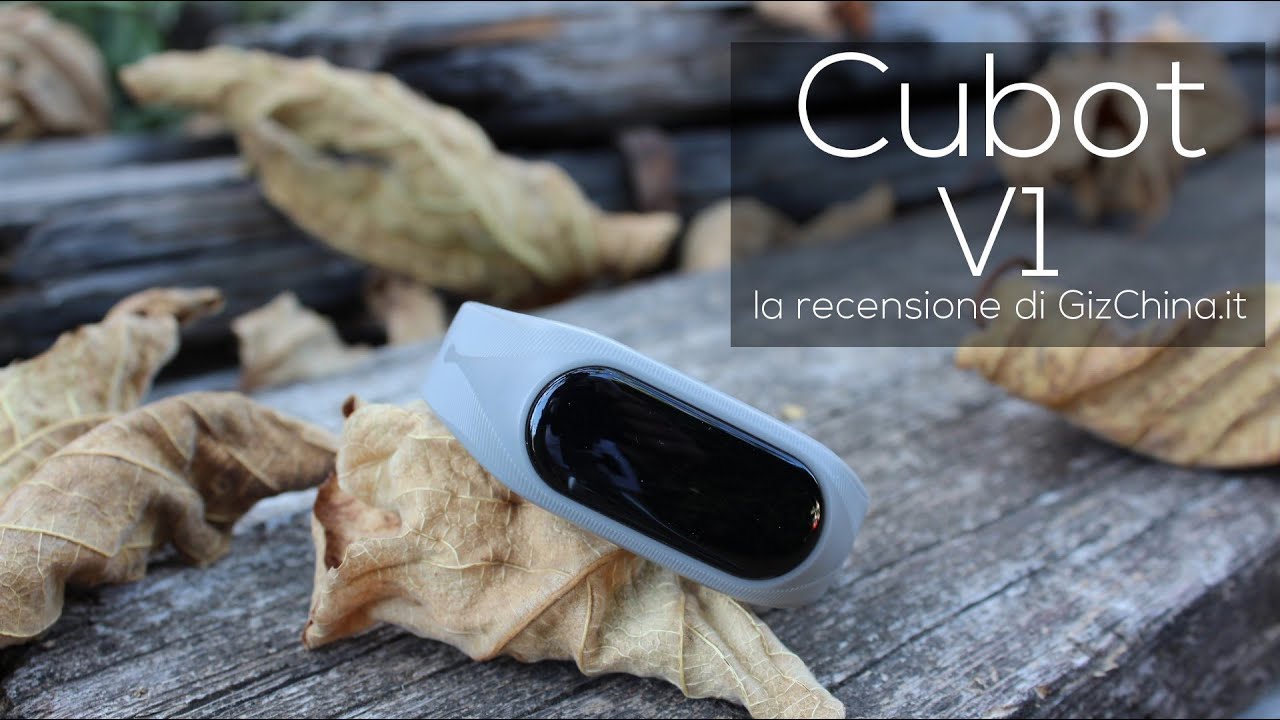 La Cubot V1 it is sold in a very minimalist looking white cardboard box. In fact, on the front we find the design and the name of the band, accompanied by the company logo in an elegant silver color. Finally, on the back we can see the technical specifications of the device.

Like so many Chinese smartbands produced recently, the design area of Cubot V1 is inspired, in part, by that of the Xiaomi Mi Band 2. The result is not the best as aesthetically design is not the best, especially in gray, which makes this band even less pleasing to the eye. 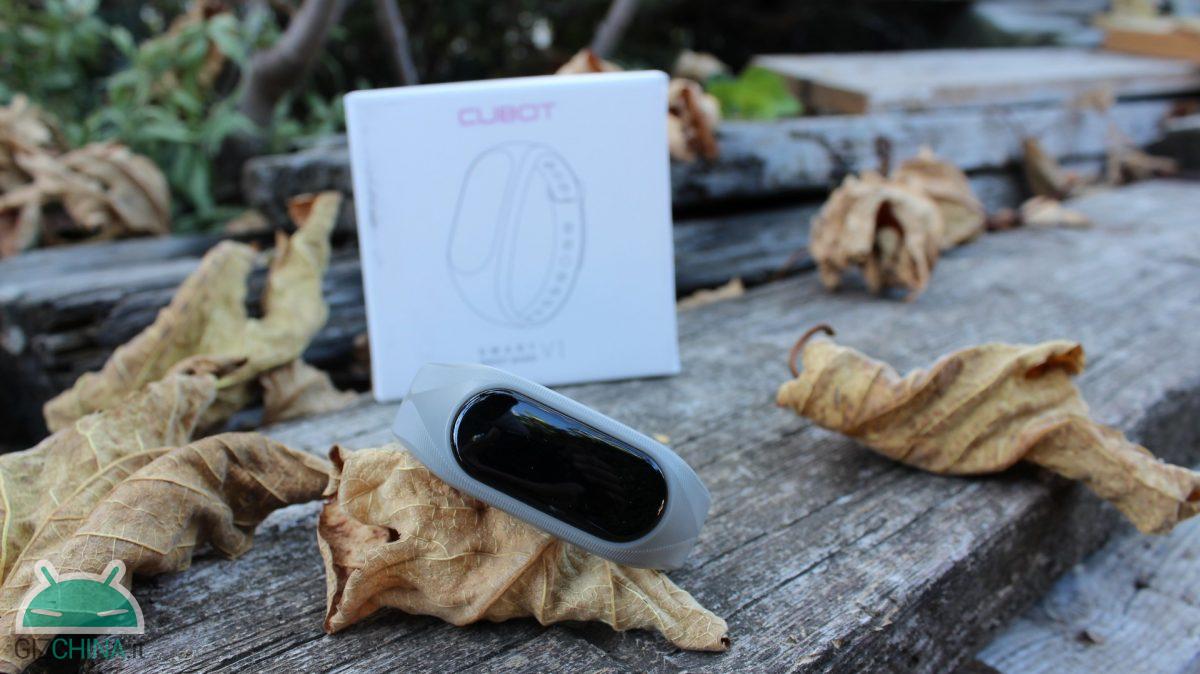 The materials used are rather cheap, in fact, the semi-rigid plastic strap gives it a little too much economic to the wristband. 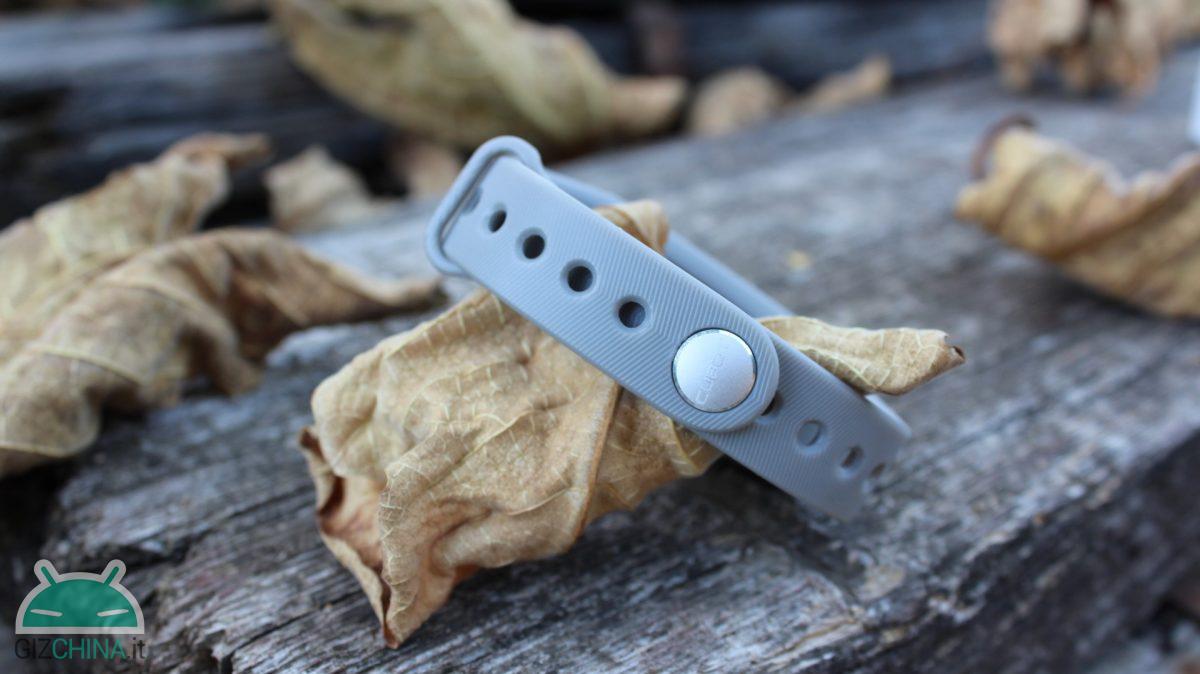 Within the latter is embedded the heart of the activity tracker, or the removable sensor. It is composed of a display OLED da 0.88 inches with resolution 128 32 pixels x, flanked on the right side by a touch button that, unlike the Xiaomi Mi Band 2 and Teclast H30, is not indicated with any type of symbol. 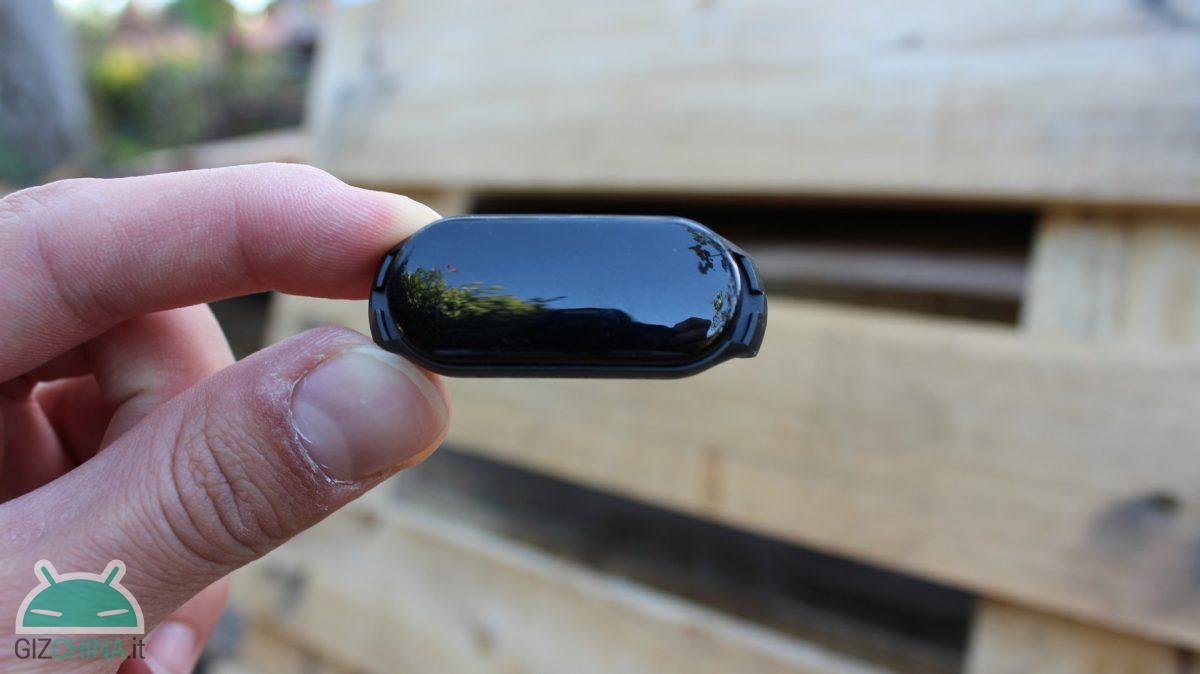 At the bottom we find only the entrance micro USB useful to recharge the band, while the heartbeat sensor is not present as this fitness tracker is not equipped with it. 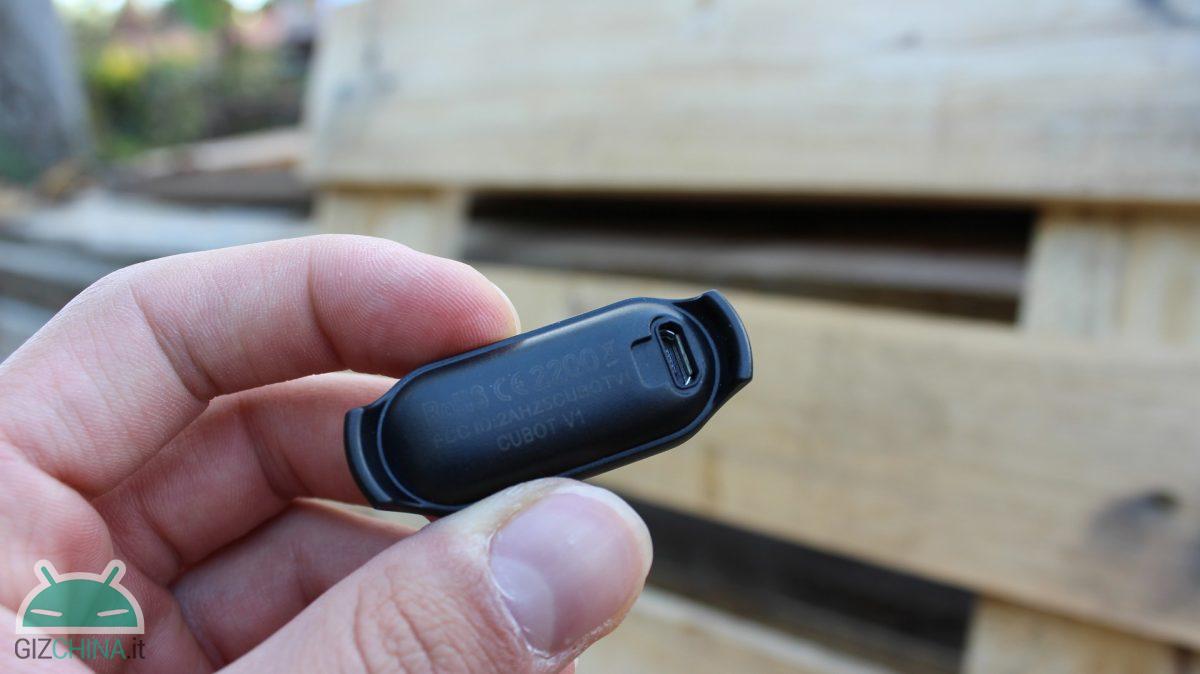 Like all smartbands, the Cubot V1 it can work either autonomously or by association with the smartphone, which integrates additional functions.

Regarding the stand-alone operation, we can interact with the band through the touch button, through which it is possible to view the various items in the menu. By touching it we can see the time and the remaining battery, the date, the steps taken, the calories burned and finally, the kilometers traveled.

The functions present are not so many, but represent the basic package for a fitness tracker.

Obviously, by associating the band through the Bluetooth to our smartphone, we will have the ability to monitor all our daily progress and also some additional features such as the sleep monitoring and general statistics weekly and monthly.

Furthermore, again through the appropriate application it is possible to enter parameters useful for detecting some data such as the target of the steps to be carried out daily and the alarm in case of sedentary lifestyle.

To add to the list of options we also find the sleep assessment e of physical activity, Wake-up calls and notification settings. 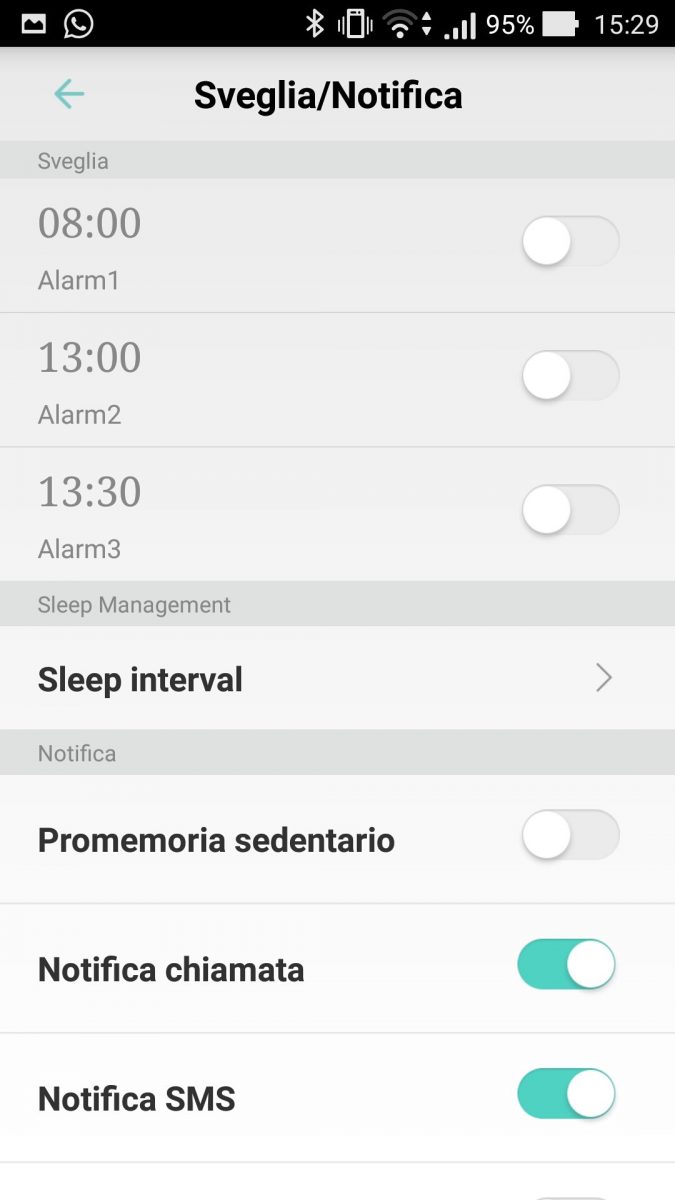 La Cubot V1 is equipped with Bluetooth 4.0 through which it is possible to associate the band to the smartphone and interact with it through the proprietary application CUBOT Band available both on Android (from the 4.3 version) than on iOS (from the 8.0 version). 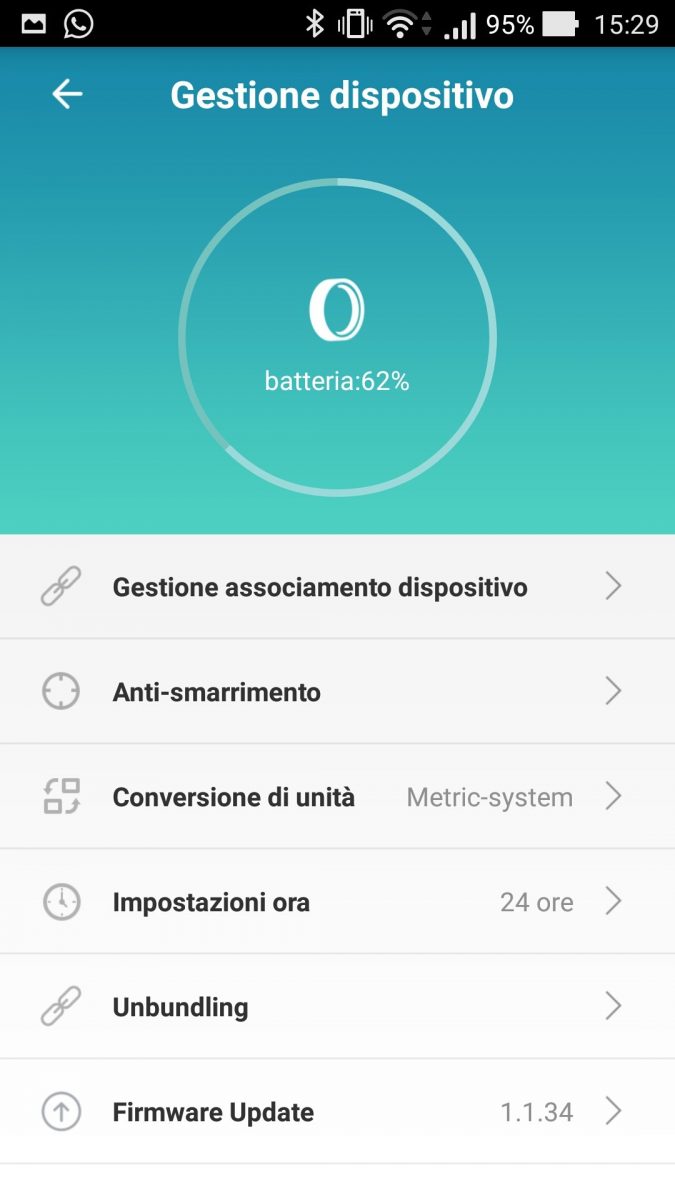 Through the association, in addition to exchanging i fitness data, it will be possible to receive on their band the notifications related to Message, calls e WeChat.

Unlike the Xiaomi Mi Band 2 and the Teclast H30, the Cubot V1 does not allow us to receive notifications from external applications, except for the instant messaging application WeChat widespread in the Asian landscape.

La Cubot V1 it is powered by a well battery 80 mAh, which can guarantee us a range of about 1 month of use with Bluetooth always-on.

La battery is definitely one of the strengths of this device, which manages to be even more enduring than the Xiaomi Mi Band 2.

Obviously the autonomy also varies according to the number of notifications received and based on how much you interact with the band, but overall you can still get excellent results. In addition, the heartbeat sensor is not present, i consumption are really reduced.

After putting the cards on the table we are finally ready to analyze each point and to draw some considerations.

So let's start from design and from construction of the band, because as mentioned earlier, i materials rather, they are used for the production of this device economic and the design is not particularly catchy, indeed. 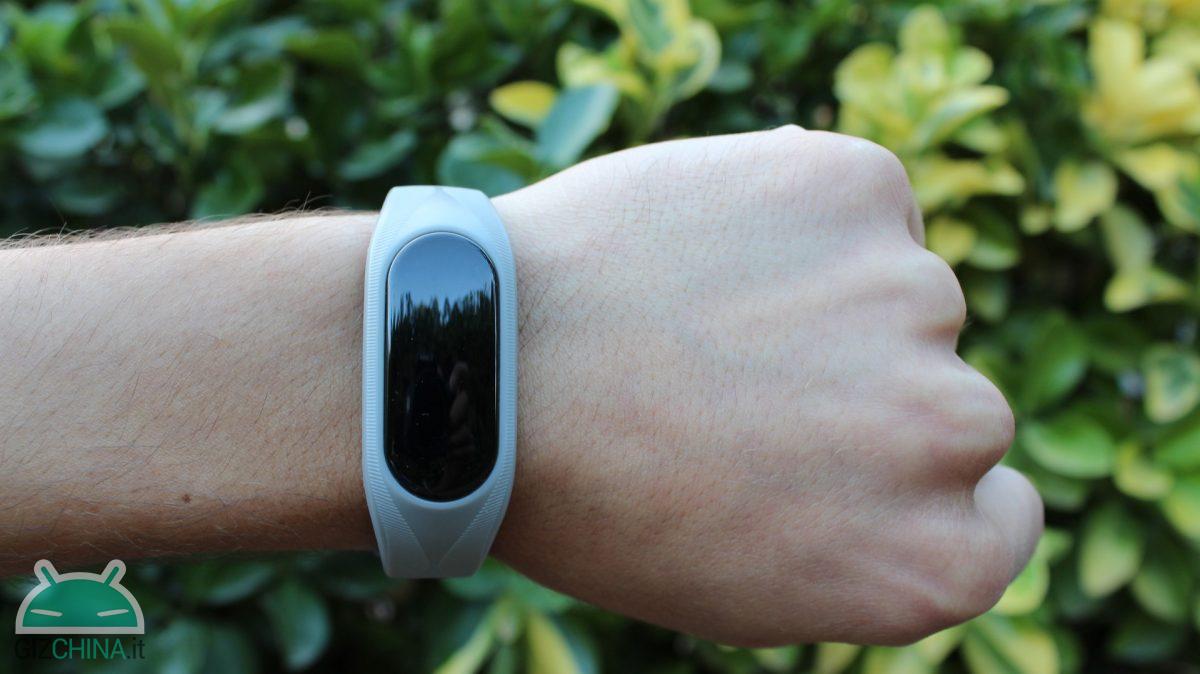 Obviously the aesthetic factor is purely subjective, you know, but personally it did not make me crazy because of its size.

However it is very comfortable on the wrist and also, thanks to the semi-rigid plastic of the strap, the sweating is much lower than the rubber strap used on the Xiaomi Mi Band 2 Teclast H30. 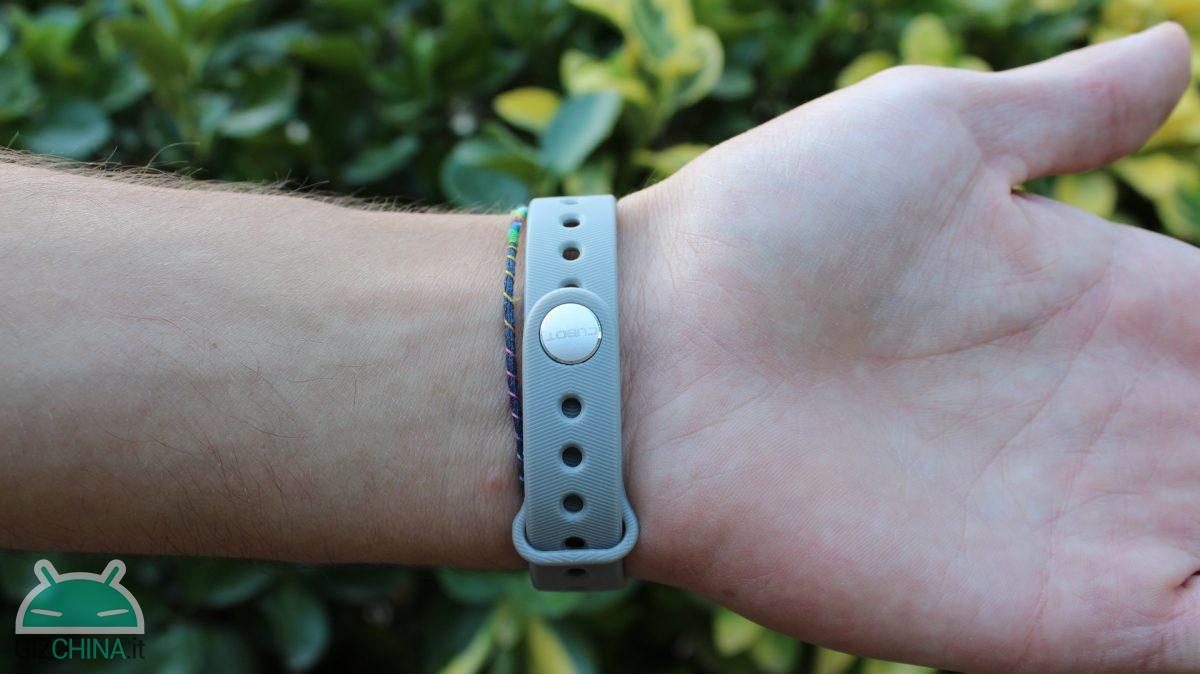 Remaining on the construction, the Cubot V1 è waterproof and owns the certification IP65. Despite this, the Micro USB input is protected only by a little button that is too simple to remove. So, despite the certification, I would advise not to expose it even to small jets of water.

Il OLED display è poco oleophobic e poco visible under the sunlight and besides, it did not seem to me of an excellent quality. 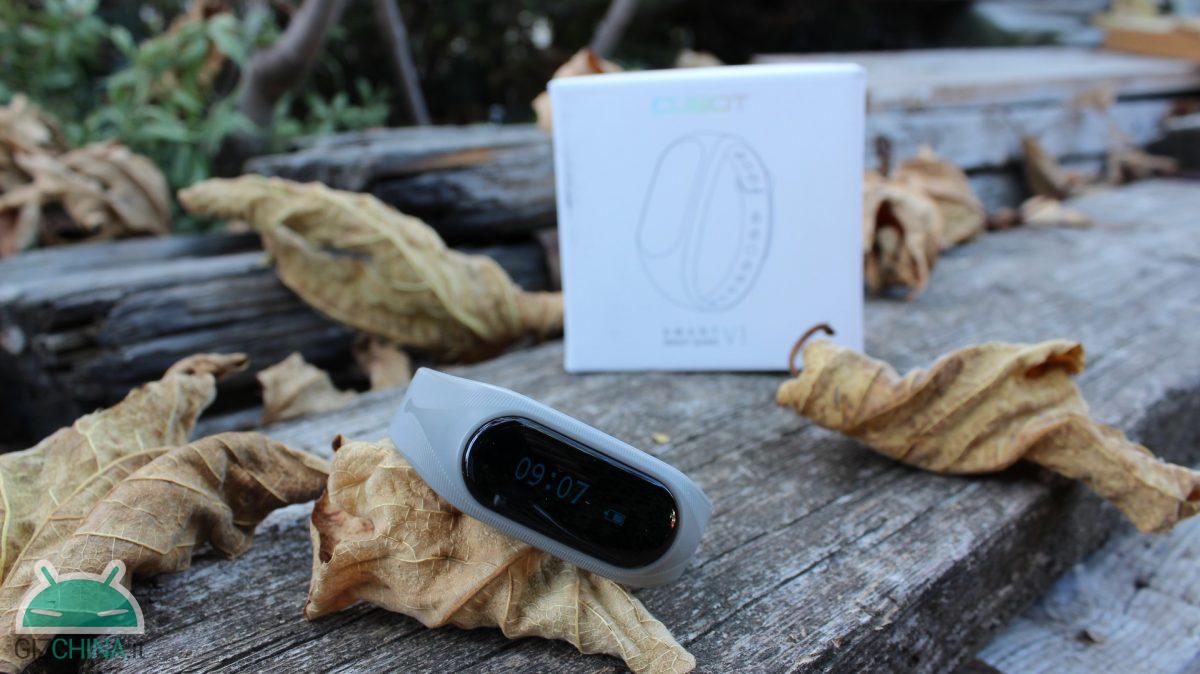 As for the interaction with the band and therefore with the panel, there is no function that allows the awakening of the display by rotation.

Speaking instead of data collection, the calculation of the steps taken, the meters traveled and the calories burned is quite accurate, so overall it does its job sufficiently.

What instead disappointed me was the sleep monitoring, which is completely busted. In fact, it fails to spot the moment when you fall asleep and the moment you wake up, always staring at the 7 in the morning.

Also, I was not convinced by the fact that after midnight many times it was necessary to connect the band to the smartphone via the application, because otherwise the new count of steps / kilometers / calories would not start.

Regarding theproprietary applicationI sometimes had problems connecting the activity tracker to the smartphone. Overall it is very simple and intuitive even if a bit 'too poor in features.

La receipt of notifications it is excellent and instant. The only flaw (not negligible for many) is that, outside of WeChat, you can not set up other applications to receive notifications.

To draw the final conclusion we must start from the assumption that the Cubot V1 is available on tinydeal only 11 euros.

So, despite the various flaws, the derisory price could make us close an eye. All in all, excluding sleep monitoring, this band performs his fitness tracker work sufficiently.

We recommend the purchase for those wishing to immerse themselves in this field of technology for the first time without spending too much. For those looking for a activity tracker complete and cheap at the same time, then we advise you to turn the choice towards another product such as the Teclast H30.

Huawei Watch Buds with built-in TWS: a video shows how it works

Amazon Black Friday is nearing its end: all the offers ...