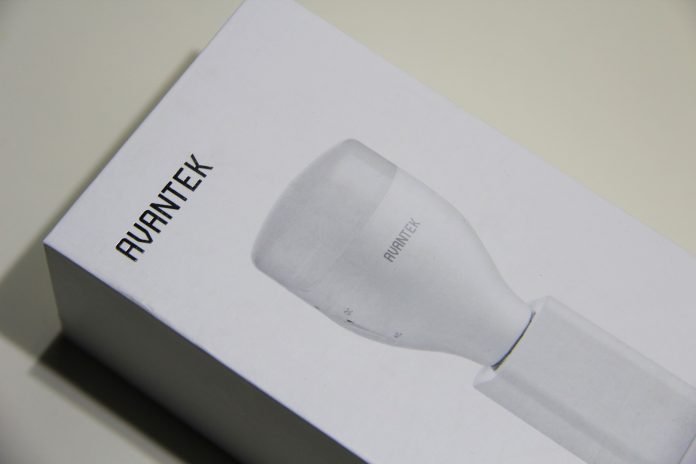 Home automation e smart home they seem like words destined to forcefully enter our lives. Despite the undeniable interest of the industry, in any case, due to the still high prices these technological revolutions appear today far from a complete affirmation.

It is already possible, however, to have one low-cost tasting of the future thanks to the many gadgets that can be controlled by smartphones (from the cheap smart lights to the more expensive rice cookers) marketed by the various manufacturers.

In the past we have already reviewed this type of products, and today we will add to the list AVANTEK WF-L1. It is a light bulb E27 RGB intelligent, controllable via WiFi, which differs from the rest of the market due to the presence of a capacious one integrated battery and for the numerous functions allowed byproprietary app. 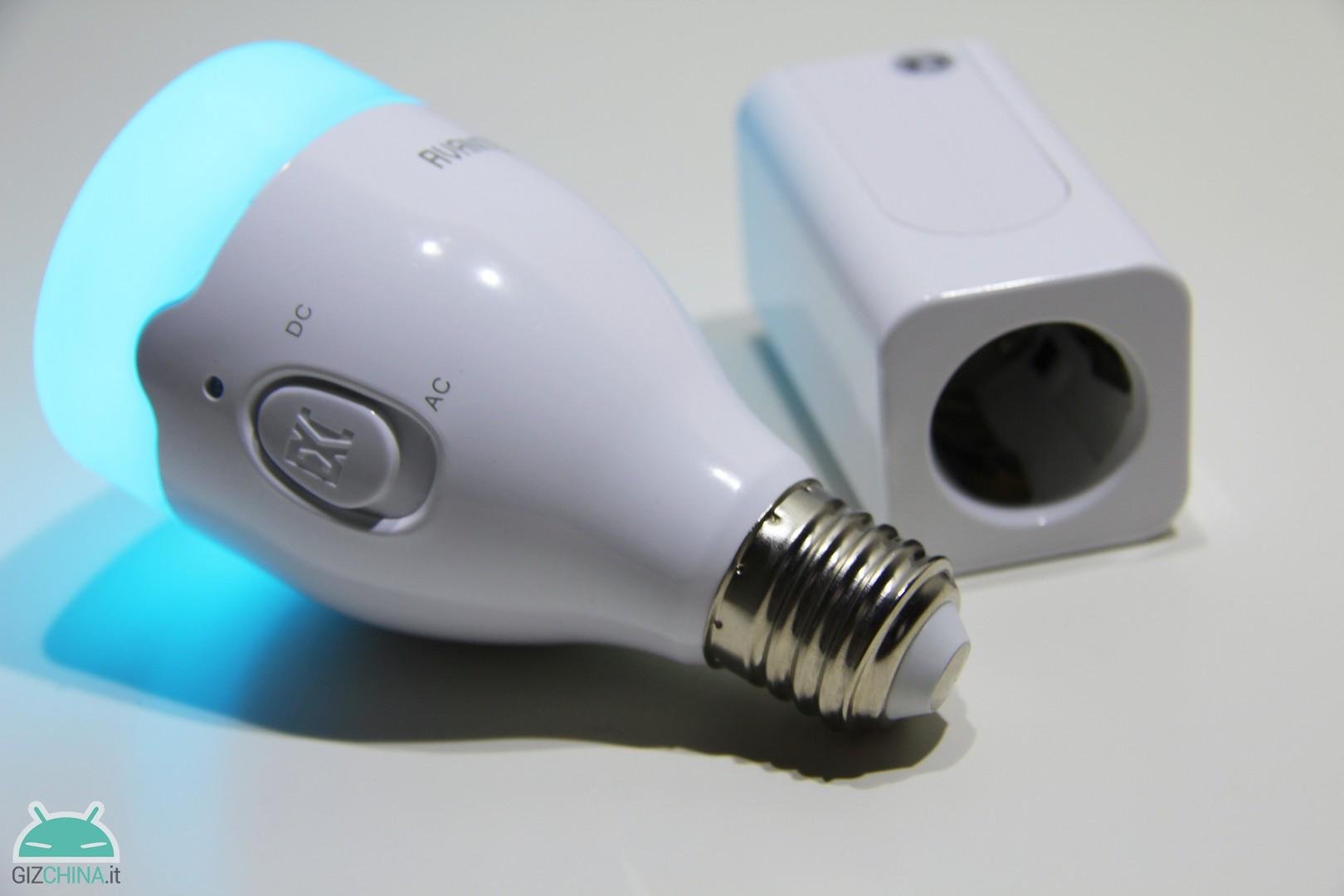 White cardboard, name of the device at the bottom, brand in silver characters and a photo of the product. AVANTEK has chosen a package for its smart light simple and minimal, devoid of references to the characteristics of the device. Also on the back of the box, next to the certification logos, we find only two QR-codes for downloading the proprietary app. Available for both Android and iOS, "AVANTEK light"Is present in the respective official stores.

Opening the package, a thin layer of polyurethane foam hides and protects the lamp and its accessories from view. The latter, not particularly numerous, consist of a cable USB-MicroUSB, In a basis and in manual in English.

Finally, the specifications declared by the manufacturer tell us about a product that can reproduce 16 millions of colors. The maximum consumption would then be around the 6.5 watts,, with an autonomy of 3.5 hours (high brightness). The weight of the device is of 157 grams, which rise to 219 g with the base. Its total height is instead of ? cm and the maximum diameter is 65 mm.

An observer poco careful could easily confuse this smart light with a common LED bulb. Only the presence of a slide switch for the selection of the feeding mode (with the relative DC-AC writing), of a small one button (for manual change of light color) and the MicroUSB port in fact, they report the smart soul of the product to the most expert eye.

The design of the lamp, despite the presence of the cumbersome E27 screw connection, then appears quite simple and elegant. A white polycarbonate body with soft curves, in particular, protects the battery and integrated circuits. A satin-finished plastic dome also hides the RGB LEDs and diffuses the light.

Use as stand alone lamp, made possible by the integrated battery and the presence of the supplied base, it does not seem particularly satisfying to the eye. The pedestal, in particular, is a parallelepiped with rounded corners of the same polycarbonate used for the bulb. Despite this element has a simple and minimal aesthetic, we find that the square shapes slightly stoner with those of the device.

Good construction materials, which appear solid, resistant and free of bending. The same positive judgment can be given to the slide switch (surmounted by a small charge LED) and, on the other side of the device, to the button for selecting the colors. Finally, we point out the presence of the AVANTEK logo to separate these two elements.

If we were to test the light bulb only for the hardware aspect this review would be very short. It would be enough to tell you, in fact, that according to our tests the smart light at maximum brightness and fully charged battery emits poco less than 300 lumens and consumes poco more than 3.4 watts,. This is a similar brightness, for example, to that of an incandescent bulb of about 25-30 W. 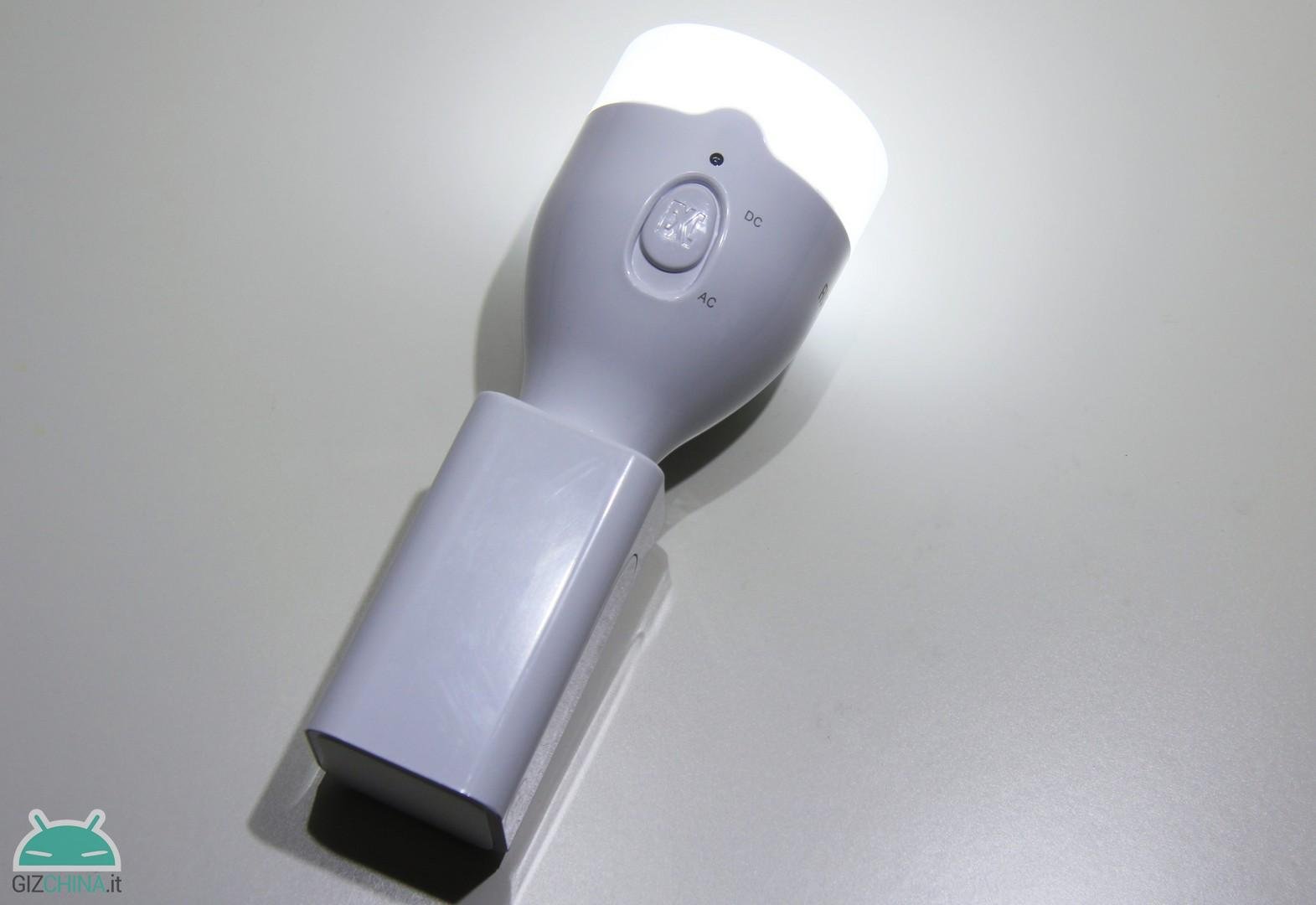 This data reveals that the product is far from the brightness expected from a 6.5 W LED bulb. The manufacturer has therefore played on the consumption of the smart part to confuse buyers with a fairly truthful but easily interpretable data incorrectly. The maximum consumption in AC mode is in fact about 5.9 W and is obtained at maximum brightness with battery being charged.

We could add, then, that the integrated battery requires approx 6.5 hours for a recharge complete with his 2000 mAh. The autonomy of the device is naturally influenced by the settings used, but we can tell you that in "working" mode (about 240 lumens of cold white light) this settles on the 3 hours. The latter value, unfortunately, is lower than that declared by the manufacturer. 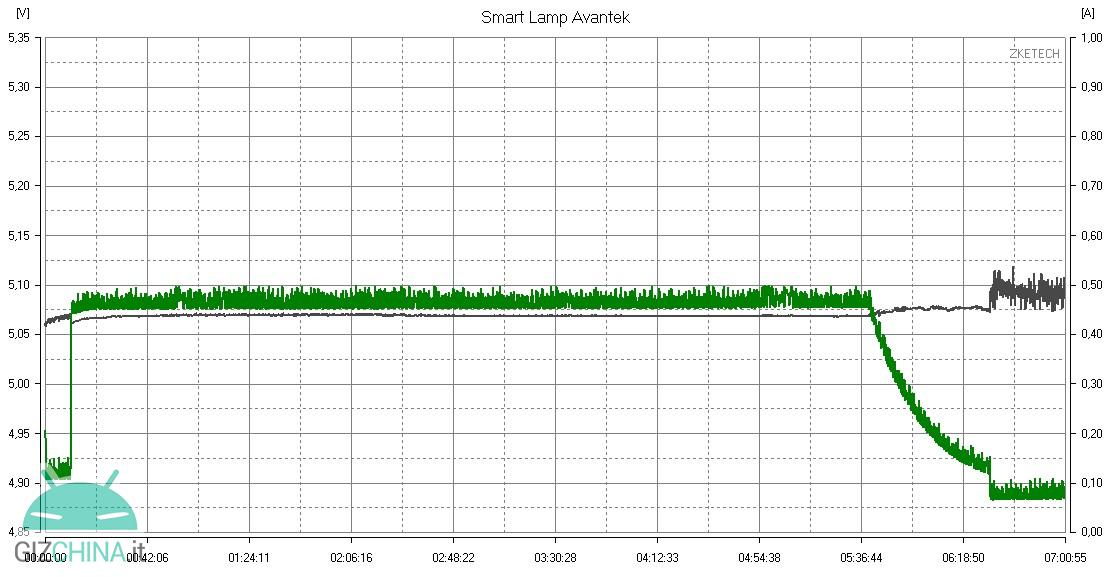 These data, however significant, tell only a part of the product. The other half to be examined is indeed the smart one, which relies on the app owner. After making a simple installation through the market, we therefore tried the lamp with an Android smartphone.

For the first connection the app requires the network password WiFi through which you intend to operate. Therefore, if you have an unsecured network at home, you may encounter problems carrying out the procedure. We must also point out that the lamp is not compatible with band a 5 GHz.

Once a connection is established, the app will show the devices Avantek detected and you will be able to access the lamp control panel. In addition, if you have more smart lamps, you can create groups to send to all the same commands.

The first control screen offered by the app is that of manual control, which allows using a wheel to choose the color of the light emitted by the lamp on a scale RGB, on a gray tone and on one that should emulate the choice of temperature.

At the center of the wheel, then, we find the button to turn off the smart light. The image of a stylized microphone, finally, allows you to access the voice controls, unfortunately not very complete and only in English.

Selecting "Fashion"From the bottom bar, therefore, we access the preset effects. These are divided between the static ones, collected in "Scene", And the dynamic ones ("Effects", With modifiable transition speed). For both categories it is possible to easily add new customized effects by the user.

The board "AmusedFinally, it collects perhaps the most interesting functions of this smart light. Among these, in particular, we remember the possibility of obtaining a psychedelic effect in rhythm with the ambient sounds thanks to the smartphone microphone or the music player integrated in the app.

We must report, unfortunately, that these two features have proved very energizing for the device Android used by us. Lastly, the shake function is less memorable, allowing the smartphone to change the color of the light in a random way.

Finally we have to dedicate a small note to the reliability of the app, which has not always proved to be up to expectations. Several times, in fact, there were annoying connection problems, however always solved after some attempts. We have repeated, to conclude, the tests with the version for iOS di AVANTEK Light, and we did not find any particular differences between the two apps.

This product represents a taste of the smart houses of the future, but it is right to ask if the taste of this bite is worth it 40 € currently requested on The Amazon for your purchase.

The lamp from the hardware point of view is well built but not very bright, while the software can boast some interesting features but still seems a little bit unripe. The lack of a timer function to program the switching on and off of the device then weighs on our judgment.

We can not therefore promote the product with full marks, which seems to us to be a gadget that is perhaps too expensive.

If it were offered a few euros less, then, the device deserves the attention of consumers for the unquestionable build quality and, above all, for the nice musical functions. In fact these are the elements that, together with the built-in battery, distinguish the product from the competitors and could easily convince the purchase.