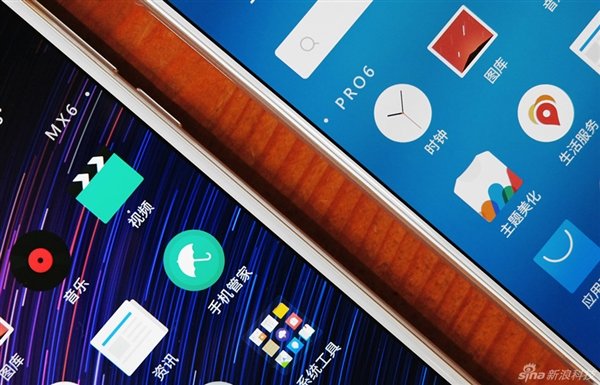 Following the presentation, which took place today, of the Meizu MX6 (which you can read in our article to this link) on Chinese blogs i have been unleashed photographic comparisons with the other devices of the Chinese company and, in particular with the Meizu PRO 6 and Meizu M3 Notes.

The photographic comparison between Meizu MX6 and Meizu PRO 6

With the first leaked images of the device officially presented today, it immediately became clear similarity with the top of the company's range, the PRO 6.

In fact the latter appears as one version "in miniature" of the Meizu MX6, just by virtue of the different screen sizes: from 5.2 inches in PRO 6 and 5.5 inches in 'MX6.

The only obvious difference is represented by the very particular fcircular lash with 10 LED (which surrounds theautofocus laser) present on the model PRO, replaced by a more usual dual Flash LED dell 'MX6, while the front side it really appears identical.

This similarity he had unleashed one internal controversy to the same company, so much so that the CEO di Meizu had publicly declared that, were it not for too much resemblance to the Meizu PRO 6, this MX6 It would certainly be the best phone in the series MX.

The photographic comparison between Meizu MX6 and Meizu M3 Note

Moving on to the comparison with the cheapest model Meizu M3 Notes, we are faced with one partially different situation.

Being the two devices equipped with the same diagonal of the display, it can be noticed that these appear, frontally, really identical if not for a very small detail: the key mTouch dell 'M3 Notes it is slightly thinner of that of the Meizu MX6.

Also the disposal some sensors and headset capsule are really similar but, fortunately, in this case it is the retro to establish a sharper contrast.

In fact, theM3 Notes presents a design more similar to that of "previous generation"of Meizu central body in metal and, at the two back and bottom edges one plastic band for antennas. Also the dual flash, More stretched, and the camera, not protruding e without a metal frame, differentiate the phones without any doubt.

If this were not enough, then, the thickness of Meizu M3 Notes It results to be top, thanks to the battery from 4000 mAh, significantly larger than that of the Meizu MX6 and position of headphone jack, in the first case placed on the upper part and in the second on the lower part, they significantly differentiate the design.

What do you think? Are you happy with this uniformity between devices or do you think these should be more characterized?