At the beginning of last year he appeared on the market Smartisan T2 the company has defined its new top of the range, which however has been defined by many users as a "passing" device. The new "real" top of the range should in fact be represented by the Smartisan T3 of which they are appearing lately many images online.

Today has appeared an interesting post on a well-known Chinese microblogging site, in which the user @StevenCurry has released some rumors regarding the technical data sheet (previously rumored) of the next top of the range branded Smartisan. 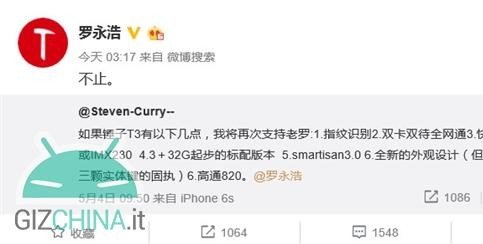 Previously several rumors had said that the new Chinese device will have the components of all respect, which will have nothing to envy to those on current top of the range on the market. Furthermore, Smartisan T3 can count on an innovative and intuitive interface that surely could convince many users to purchase.

The user who authored the post analyzes i 6 strengths that will be supplied on Smartisan T3, which are:

Surely if these above reported were the specifications present on the new top of the range of the company we would be in the presence of a potentially competitive smartphone on the market, it remains only to see what its cost will be.

As for the official launch instead, as anticipated, we believe that Smartisan T3 together with Smartisan U2 will be launched in June.