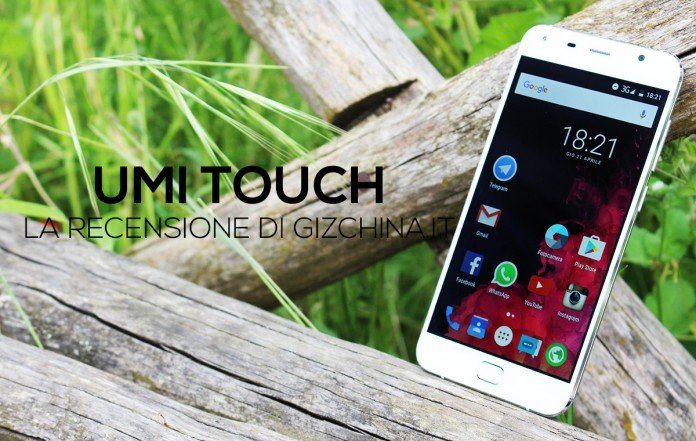 One of the most talked about at the moment for what concerns the low-cost band of smartphones is right UMi Touch, a device with an interesting potential but above all a well-designed design and construction.

Made of aluminum, it has a slightly inspired design for home devices Meizu (MX5 ed MX4 Pro, first of all), but nevertheless fails to go unnoticed; curious to find out with us in our review? 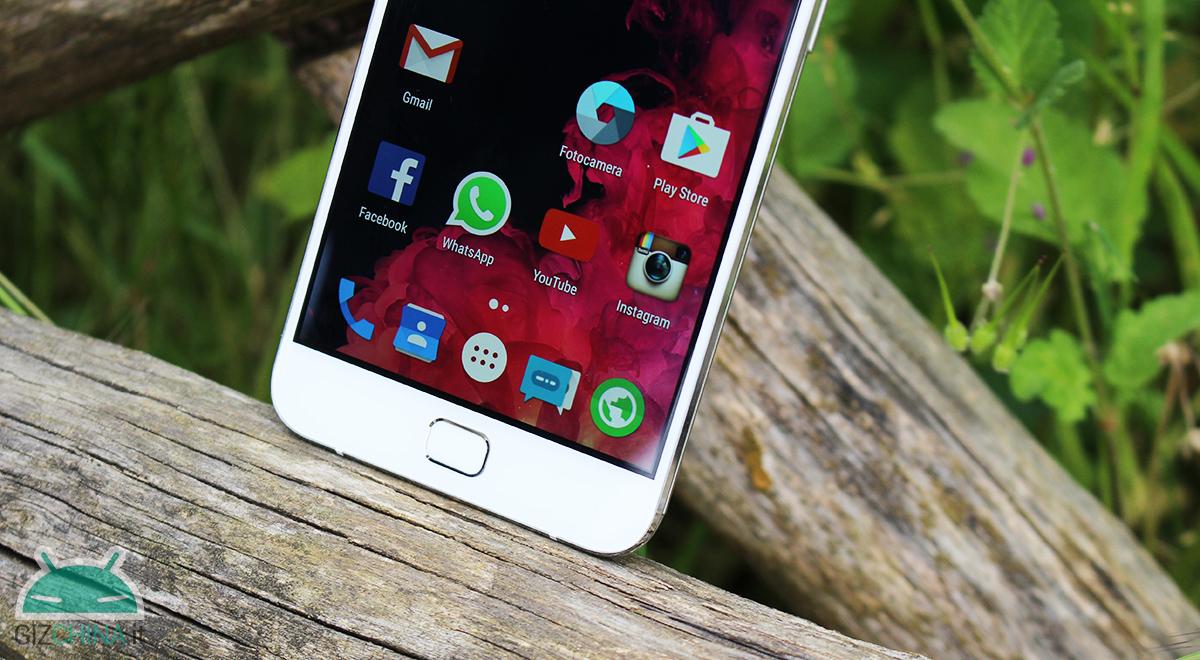 UMi Touch is available on TopResellerStore to 159 euro with shipping from Italy and 24 months warranty.

UMi on this front it does not distinguish itself, and to try to keep costs down, it has provided a really reduced sales budget to the bone; in packageIn fact, we can find: 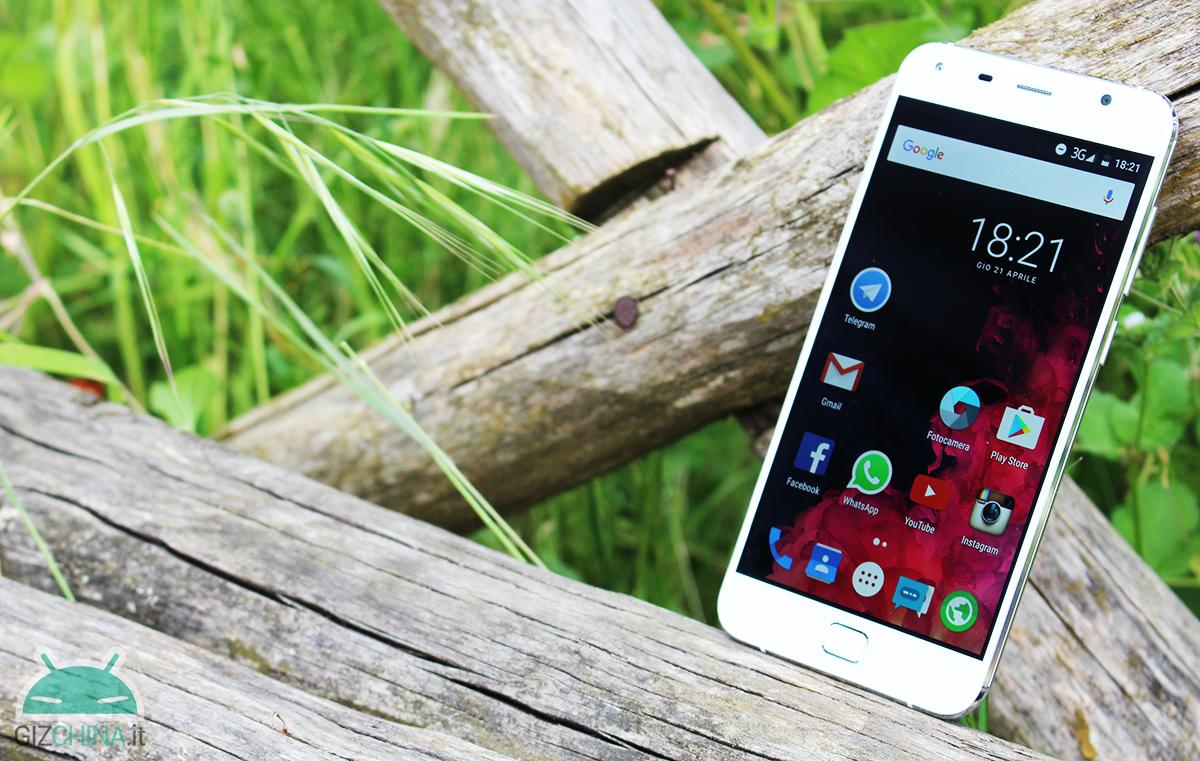 Inspired in all respects to the Meizu home devices, UMi Touch in the complex owns a design really nothing bad; is made entirely of aluminum, the back cover is unibody and all of them finishes were cured in the smallest details from the Chinese manufacturer, even if the device in question falls into the category of low-cost.

Moreover, in the front part, it has a central physical button which, besides acting as a button to return to the Home, also integrates a biometric sensor for unlocking the device; the shape of the button is very similar to that of the Meizu MX4 Pro, which in turn also possessed the biometric sensor.

Le dimensions The UM Touch is equal to 154.5 x 74 x 8.8mm for approx 190 grams of weight which, during use, actually are felt even if, considering the amperage of the battery as well as the construction materials used, are decidedly proportionate.

L'ergonomics of the device, however, is quite good; despite the rather large dimensions UMi Touch is perfectly held in the hand and there are no difficulties when trying to use it with one hand; good positioning of the biometric sensor which, however, requires a very precise touch to ensure that the device actually unlocks.

Next, instead, find the button layout and the inputs on the UMi Touch. 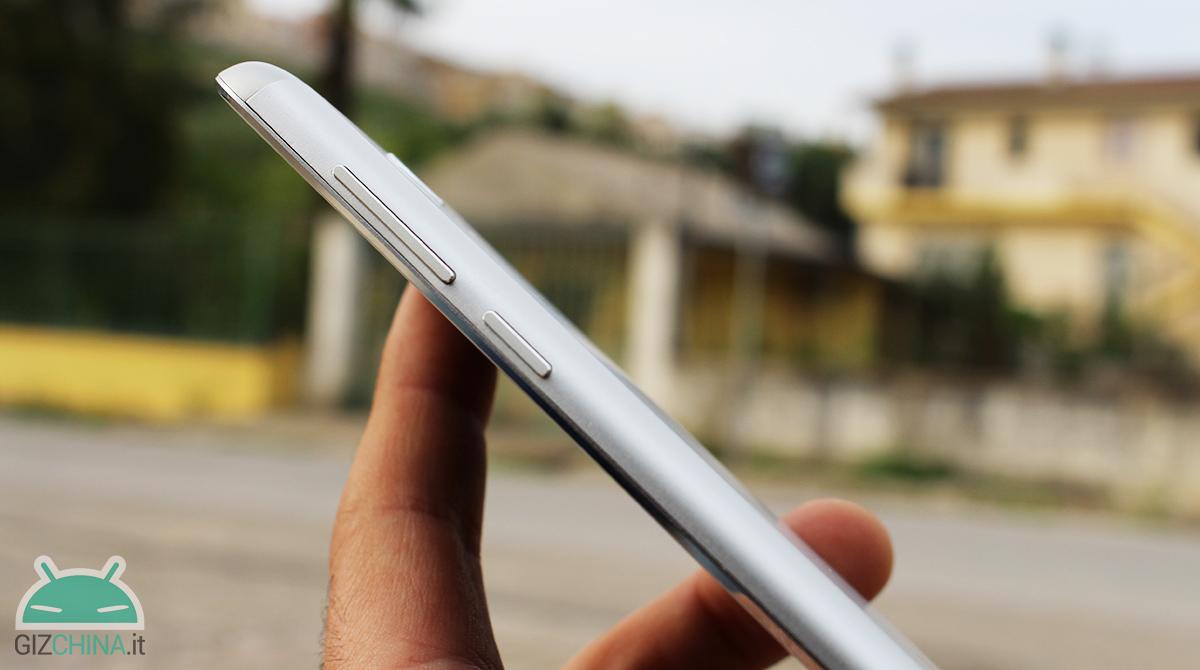 Starting from the right side on the UMi Touch we find the rocker arm for adjusting the volume and the power button, lock and turn off. 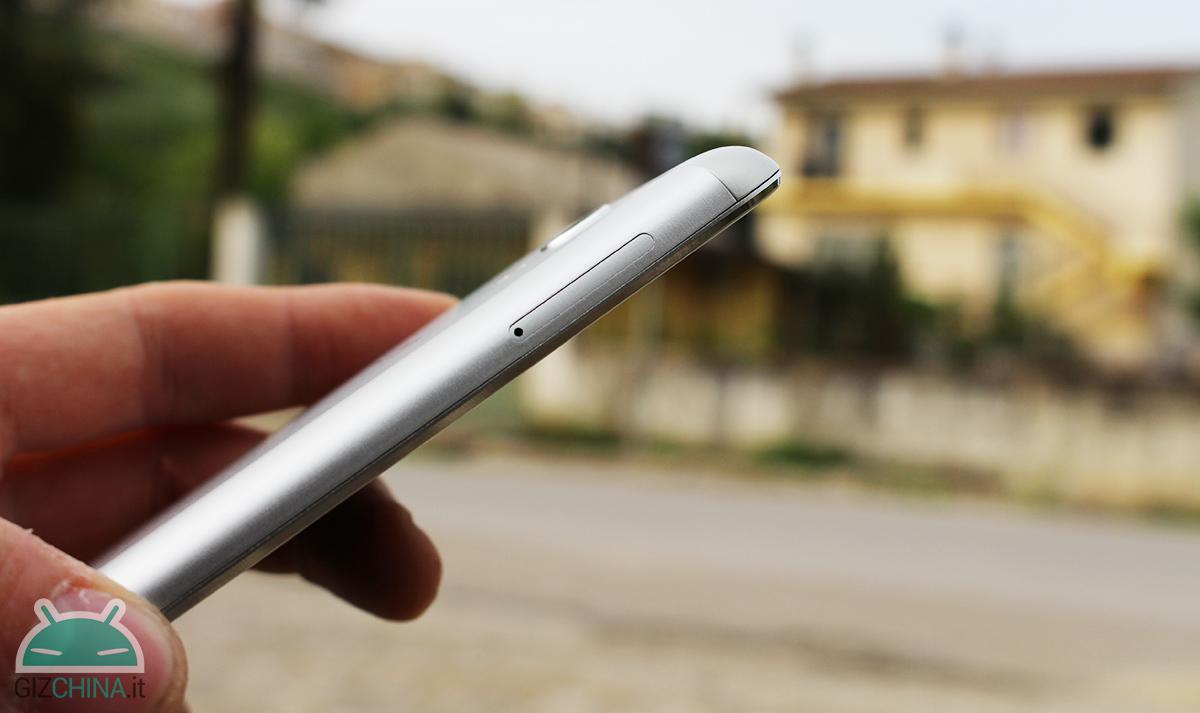 On the opposite side, however, there is the trolley for the insertion of the two SIM cards. 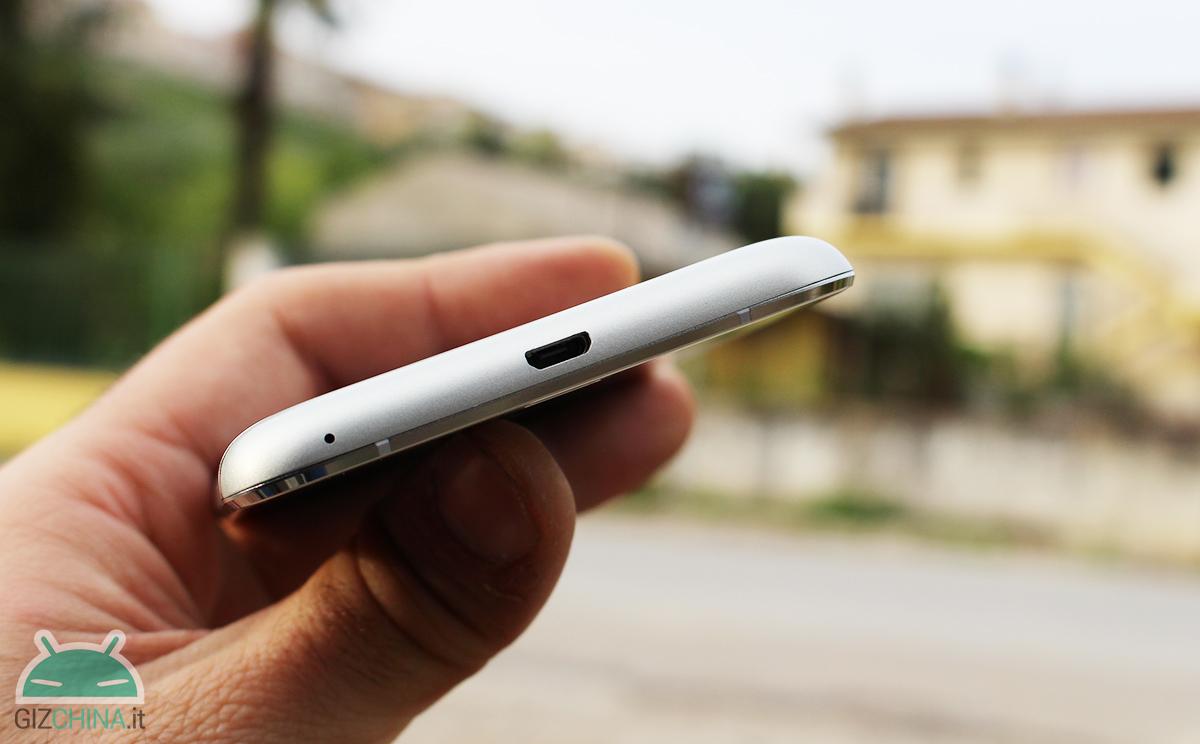 At the bottom, instead, we find the micro USB connector and the main system microphone. 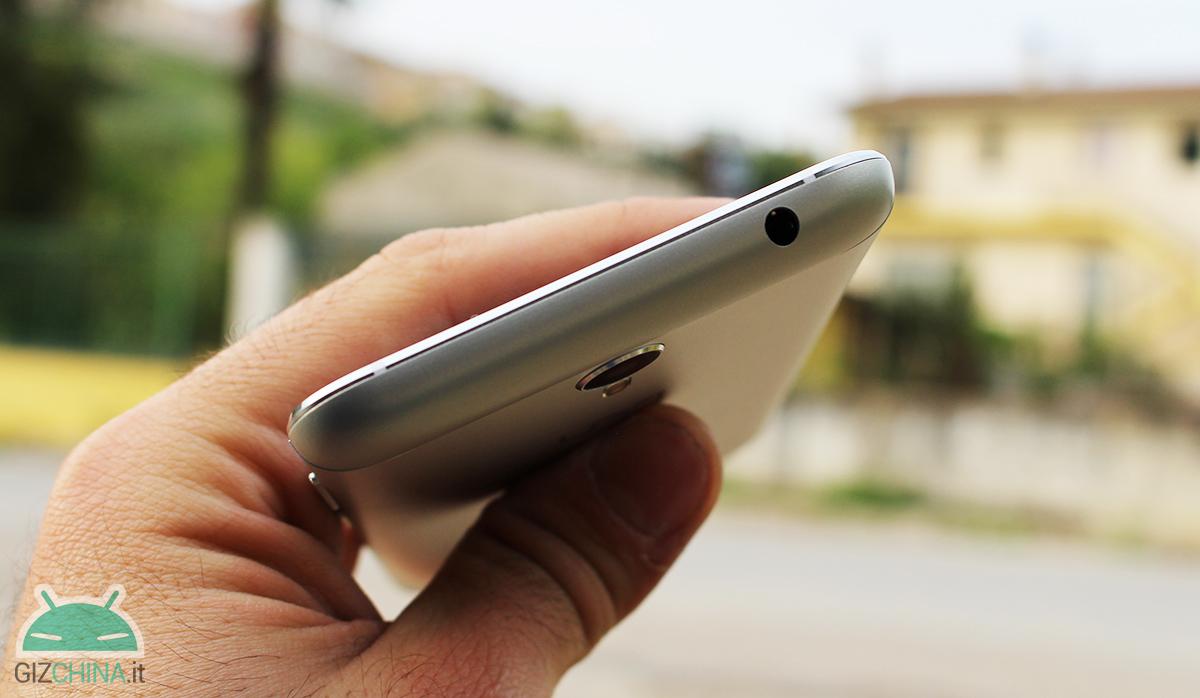 Finally, on the upper part, UMi has inserted only the 3.5mm jack for headphones. 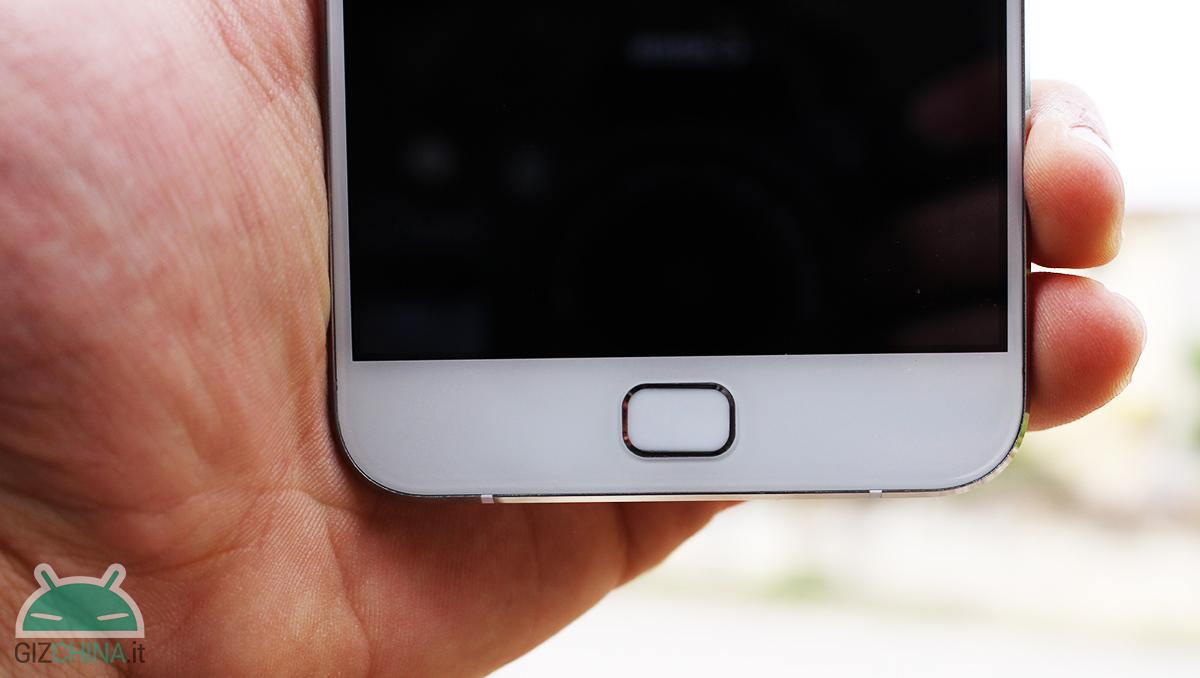 On the front, instead, as already stated, we have the central physical button with attached biometric sensor and two side touch buttons, backlit (although the backlight is very dim). 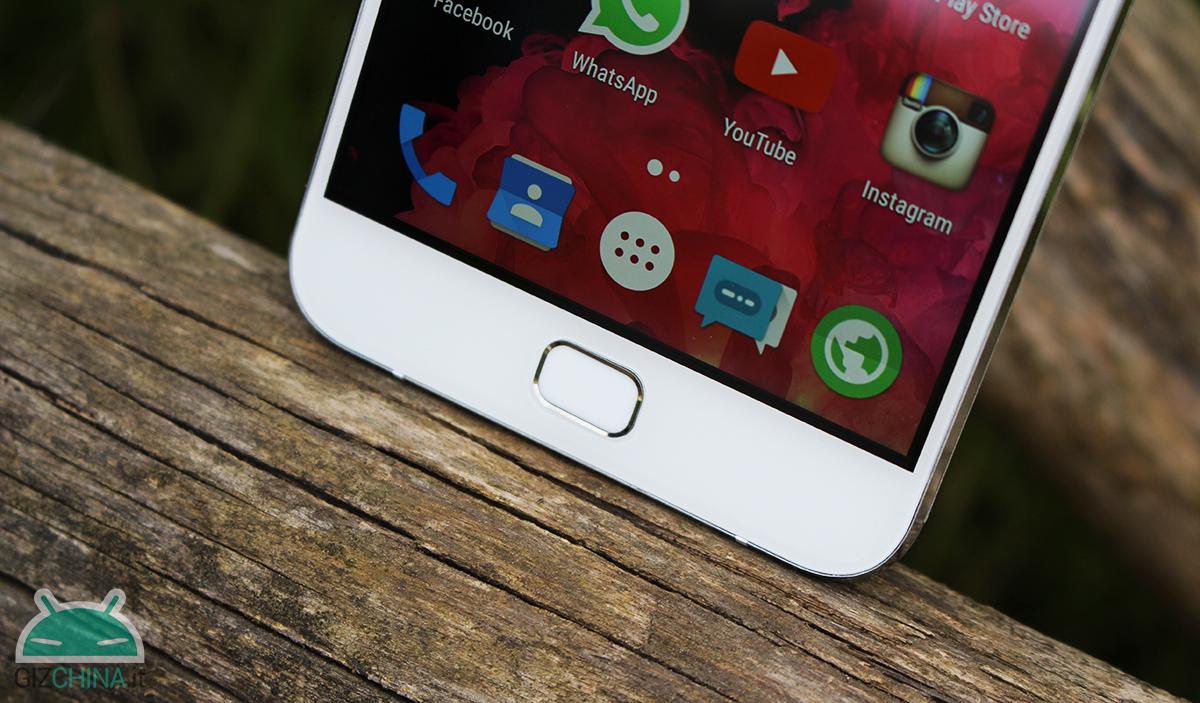 The display of which UMi Touch It is equipped with a unit of well 5.5 inches FullHD 1920 × 1080 pixels, the panel is of IPS matrix and the pixel density is equal to 401PPI, quite common values ​​overall but "anomalous" for the price range in which UMi Touch fits (since we are used to HD only units).

However, analyzing the field in the display we were quite satisfied overall, although there are some problems to highlight; the color calibration, first of all, is good but the viewing angles leave something to be desired and when you turn the display, colors like black tend to gray very easily.

La maximum brightness moreover, the screen is satisfactory and there are no major problems under sunlight; the sensor for automatic brightness adjustment is also a bit 'lazy and even in the manual adjustment of the brightness there are no tangible changes through the appropriate toggle.

Il olefobic treatmentfinally, it is not the best; unfortunately during the use of the device many fingerprints remain on the screen, certainly anti-aesthetic to see each other.

On board the UMi Touch we find 16GB of internal memory, which, excluding the system partition and useful memory to the default apps, become about 11GB available User.

The hardware of the UM Touch, compared to the market segment within which it is located, is definitely high-end; the new device of the Chinese company, in fact, has a processor Mediatek MT6753 Octa-Core ARM Cortex-A53 1.5GHz, which goes well with 3GB of RAM memory LPDDR3 at 800MHz and one GPU Mali-T720 MP3.

The hardware equipment, in short, is certainly not low-level, but we have seen in more circumstances that often a good technical data does not automatically make the smartphone a high level, especially if it lacks a good software optimization.

In everyday use, UMi Touch has proven to belong to this category, offering performances that are certainly not excellent or at least not up to what is written on paper.

However, in the use of the web browser we did not notice any particular slow-downs that instead came out very quickly when we tested the video game part with Asphalt 8 which has presented itself, to maximum details, with a very low framerate and not constant, which results in a very jerky interface and definitely poco playable.

In video playback, moreover, the device came out head-up with the samples in FullHD MP4 and MKV, while logically the hardware platform does not support movies in 4K MP4.

Next, instead, find the results of the benchmarking made with the UMi Touch. 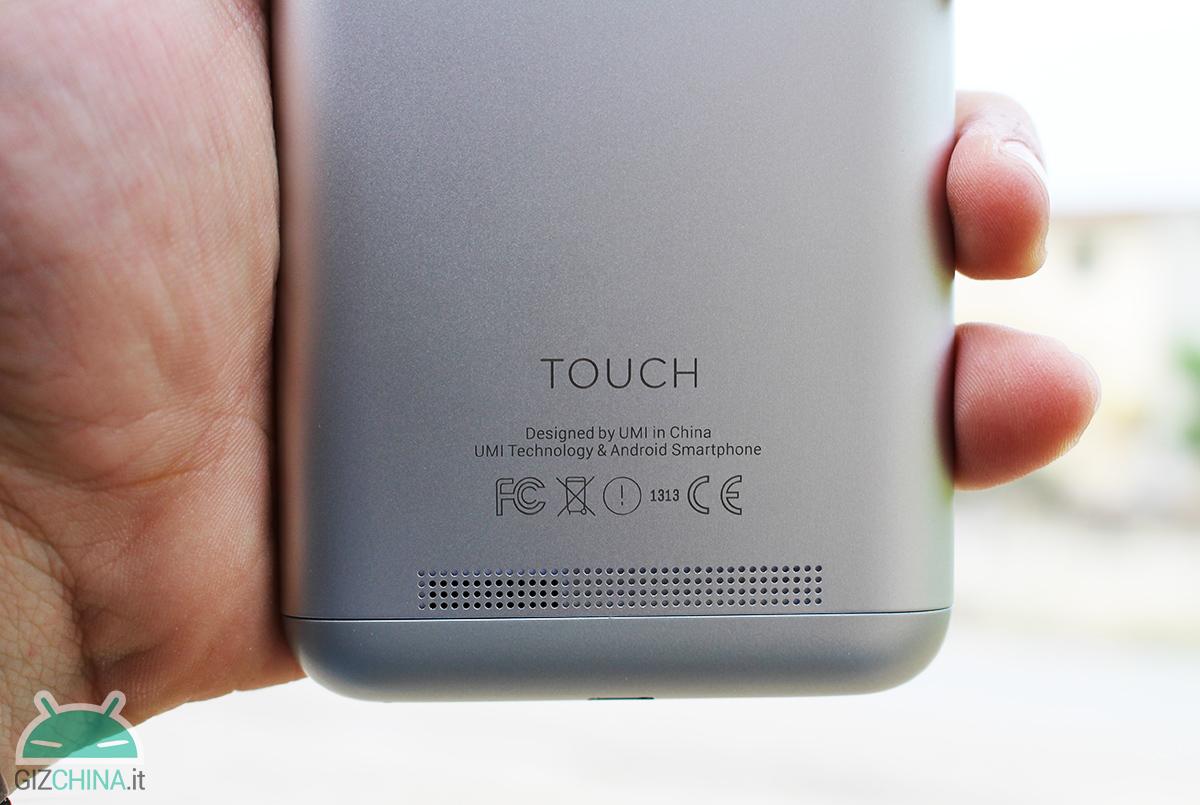 L'speaker of UMi Touch is located in the back, under the traditional words that indicate the brand. The quality of the audio output is not particularly disappointing, it is well equalized and every frequency is well reproduced.

However the positioning it negatively affects the volume factor (which alone is already sufficient), which is why it has not fully convinced us.

One of the aspects in which this device has left us more perplexed is that relating to connectivity; the smartphone, first of all, is equipped with a double SIM housing fully supports 4G networks, including the 20 band.

However, in the use of every day we found some difficulties in keeping the signal stable on the network, as well as the real difficulties in browsing the internet under the mobile network. Tested with Tim and Vodafone, the smartphone has highlighted several instabilities in reception, and we do not exclude that it may be a defect related to our sample test.

The part about Wi-Fi, Bluetooth and GPS, however, works well and there are no relevant notes to do.

In the in-depth tests on the field, even on this front we have encountered difficulties of use; First of all, the shutter speed is very long (about 3-4 seconds pass from when the shutter button is pressed, when actually the photograph is captured), and most of the time the shot will be rough index of a bad job by the image stabilizer.

For what concerns the photographic quality, then, unfortunately you can not express positive opinions because the colors of the photographs also diurnal are slightly dull and pasty, which is why the camera has absolutely convinced us.

La ROM of which UMi Touch is equipped is a stock based version on Android 6.0 Marshmallow; as such it integrates on board some of the innovative features added to the new major release of the green robotic operating system, with the exception of the two most important ones related to Google Now on Tap and Doze.

However the system is quite well optimized; It is free of third-party applications and even the Google app suite is reduced to the bone with only the Play Store and Google Now installed.

Among the additions of the manufacturer at the level of features and customizations we find the Turbo Download mode (able to combine mobile data and Wi-Fi to get a faster download speed) and the usual gesture; on a graphic level, then, UMi has inserted the only icon pack that recalls a lot CyanogenMod.

Equipped with a well battery 4000 mAh UMi Touch on this front has satisfied us fully, without ifs and buts. The device of the UMi house, in fact, allows us to end an entire day of intense use without any problem, starting from 8 up to 21.

The hours of active screen, with our type of use made of tests, social networks and exchange of messages on WhatsApp and Telegram, the smartphone has reached almost 4 half hour active screen, very good result for the beams in which it is placed, and above all not to be a battery-phone.

Considering the big one hyping that this device had picked up in the last few weeks, we were quite disappointed with the UMi Touch as, on some aspects, we would have expected a lot more from this product.

It must be said, however, that its selling price is around 150 €, a very attractive and desirable figure, despite the small defects that afflict it.

UMi Touch, therefore, is a valid and interesting device, but with some question marks too (see the connectivity and the camera, in particular); it will not be better to focus on something else, maybe?

UMi Touch is available on TopResellerStore to 159 euro with shipping from Italy and 24 months warranty.