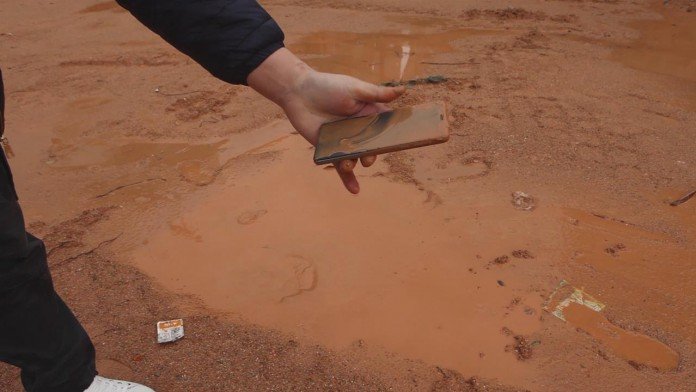 After having reported the officialization by Oukitel of the terminal K6000 Pro, the company wanted to make us participate in some of his test performed on his smartphones. In particular we speak of two terminals, the first of which is the new one K6000 Pro and then the K10000, of which we refer you to ours Full review.

The Asian company Oukitel it became known thanks to the production of some smartphones with particular characteristics. For example, one of the main specifications of most of its devices is the presence of one battery with generous dimensions.

This year Oukitel said he had invested heavily inattention to quality of their own devices. To demonstrate this, the company decided to carry out splash tests for to demonstrate the goodness with which the shells are cut and assembled, guaranteeing an excellent quality of the cuts and a good continuity of the surfaces.

Lo splash test it was done primarily by dropping smartphones into the mud, then being rinsed in the water of a puddle in the areas bordering the fall.

Subsequently a teardown of the device and is highlighted, how little has been the influence of the fall and rinsing.

The component that is checked first is the SIM cart, which does not show traces of water, but only small grains of earth. Then the. Is disassembled lower band in plastic, where there are some earthy residues inside the "room" of the loudspeaker. Finally the. Is removed aluminum backplate and it is shown that there has been no infiltration within it.

As you can see from the video, it is removed first back cover, but no infiltrations are noticed, except for the area of ​​the speaker, which in addition to small earthy residues also has a small water infiltration that however they can not affect the operation of the device.

We can conclude that, despite the two devices are not waterproof (and therefore we strongly advise against emulating the deeds done in the video), however, they are built with a certain care, which proves useful in cases of accidental falls in liquids, reducing damage to a minimum.

Did you find these tests interesting? And you who own a device Oukitel, do you feel a little safer? If you like, let us know in the comments.