In the last December article in the "Technology and the Future" column, we said goodbye with the promise of a comeback, which would occur as soon as some noteworthy innovation hit the market. Fortunately, tech companies rarely disappoint and, thanks in part to the recent Mobile World Congress, today we finally have a full list of news to be explored.

We believe we are addressing a topic of great interest to readers, in particular, talking about the new generation of high-end SoCs which is the basis of the most innovative devices shown at the Catalan fair. Given the size of the topic, we decided to dedicate a section to each chip and, on an experimental basis, to resort to a smart list to prevent the page from becoming overcrowded (any opinion regarding this solution is welcome!).

Today we will therefore analyze the powerful Qualcomm Snapdragon 820, the Samsung home champion Exynos 8890, the recent Kirin 950 and the new Mediatek deca-core Helio X20. Instead, we will resist the temptation to talk about Snapdragon 650 (met during the review of Notes redmi 3 Pro) is Snapdragon 652 which, while close to the highest range for performance and technologies, are considered mid-range by the manufacturer. Finally, in the conclusions, we will compare the performance of these SoCs in the most common synthetic benchmarks. 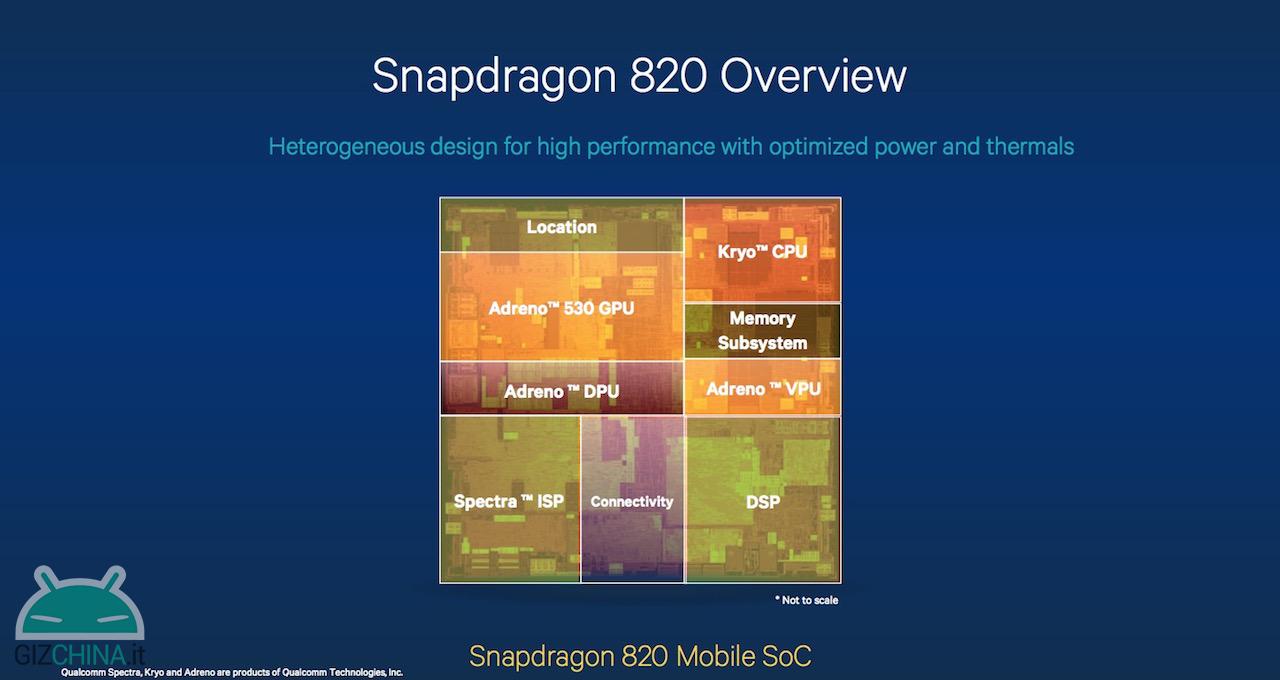 We could only start from the last born of Qualcomm, to which the American company relies to erase the memory of a first generation of high-end SoC at 64 bit not too successful. The secret weapon of this chip is the new core Kryo that, like the old Krait of Snapdragon 800, was developed internally to ensure higher performance than achievable with the Cortex A57 and A72 cores offered under license by ARM.

The return to proprietary cores marks Qualcomm's farewell to the big.LITTLE approach (used on Snapdragon 810) and the choice of a new path towards heterogeneous computing: instead of using four cores optimized for high performance and as many designed for energy saving, the company preferred to slightly reduce the consumption of a pair of "big" cores acting on maximum frequencies and integrated caches (cSMP approach).

The 820 Snapdragon used in the 64 GB variant of Xiaomi Mi 5, for example, has a main cluster consisting of two Kryo cores with a maximum clock rate of 2154 MHz and cache L2 from 1 MB and a second pair of cores based on the same architecture that work at a maximum frequency of 1593 MHz with only 512 KB of L2 shared (SoC is therefore quad-core). 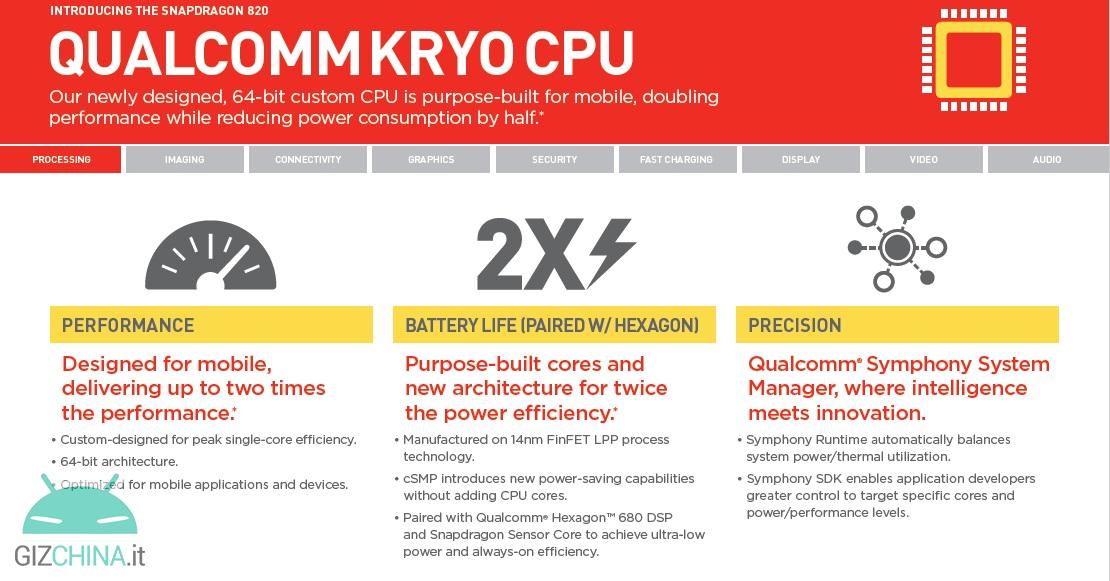 The absence of an L3 cache upstream of the two clusters makes data exchange between the two groups of cores relatively expensive, and further links performance capabilities to efficient process assignment. For this reason Qualcomm has introduced the Symphony System Manager that, thanks also to any indications entered by the programmer (via the appropriate SDK) with regard to the cores to be used and the relative frequencies, it should optimally balance computing capacity and energy consumption.

We must note, however, that the Kryo architecture seems designed to break down the dependence of performance and efficiency on the presence of well-optimized code. The use of two relatively similar clusters, for example, it reduces the importance of the scheduler, while various architectural choices (such as that of favoring low latencies without relying too much on the superscalar approach) allow to keep the IPC always high. 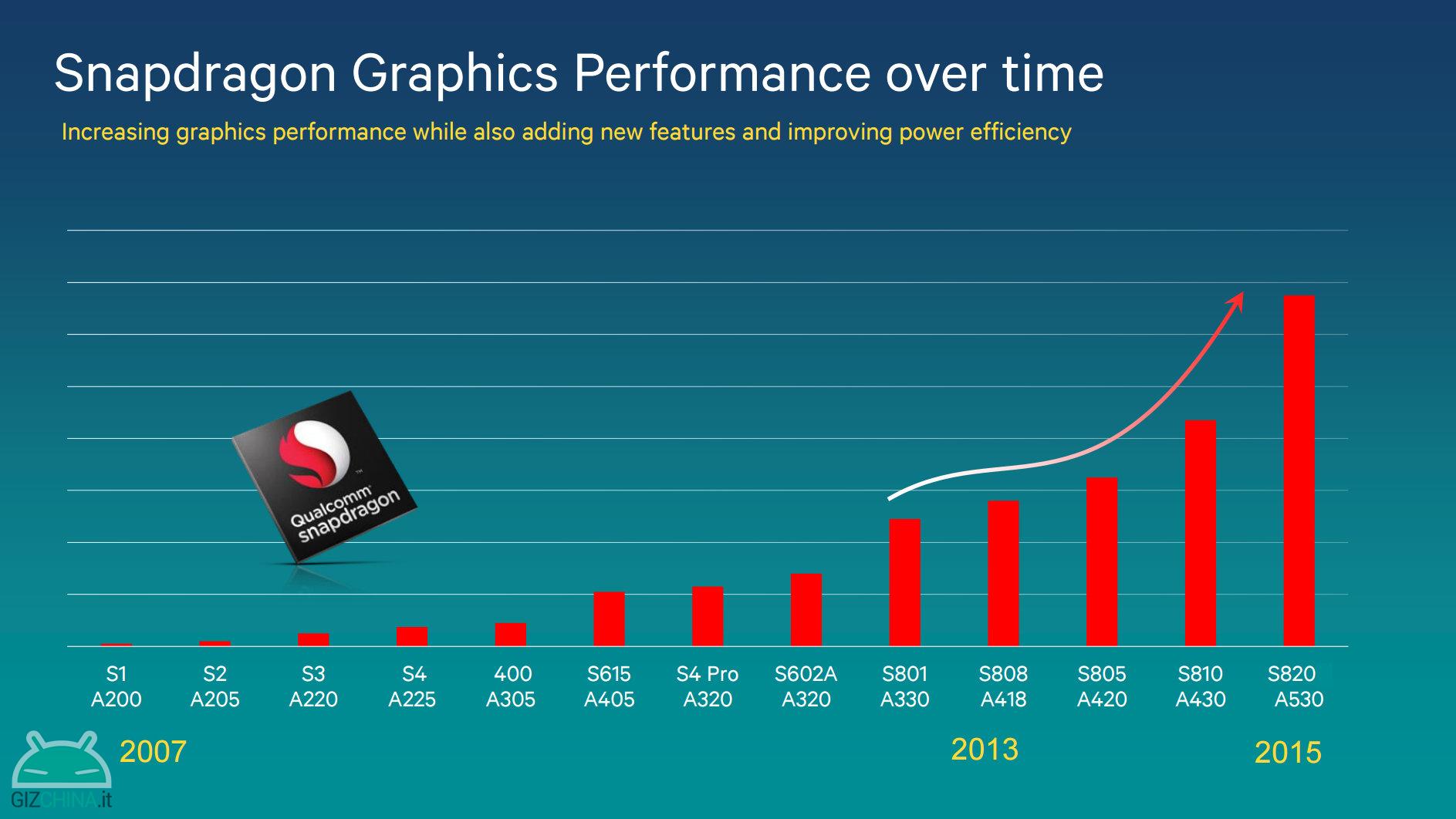 In practice, this attitude has led to the creation of a core capable of guaranteeing excellent performance which, however, in some scenarios may prove to be inferior to what the competition offers. The comparison between Kryo and Cortex A72, for example, on paper he does not see a clear winner, with the ARM core that favors calculations on the integers and the Qualcomm core that favors the floating point.

This last detail reminds us that the Snapdragon SoCs have always been unbalanced towards multimedia calculation (FP intensive), and that once again the American company has focused heavily on the graphics sector. The GPU Adreno 530 integrated into Snapdragon 820, in fact, it easily beats the competition for specifications and power, so much so that it seems oversized for use in a smartphone. 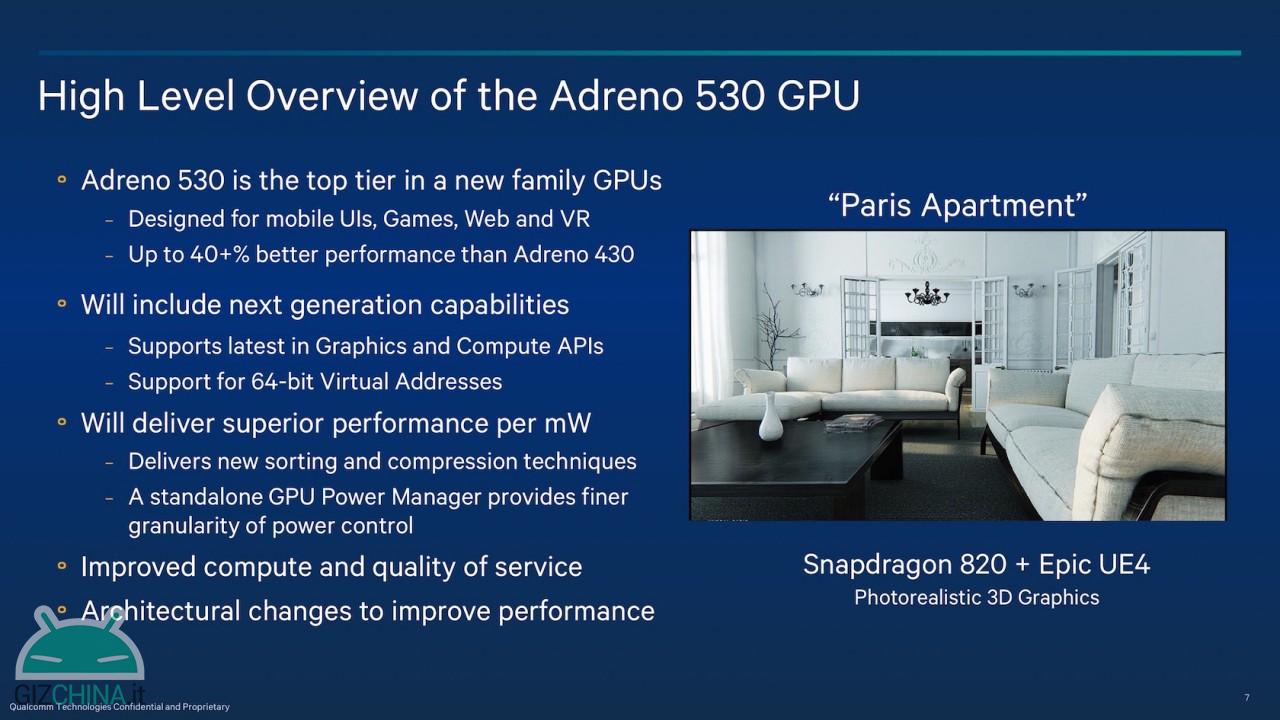 Unfortunately, Qualcomm is very jealous of the technologies used in its solutions, and consequently we cannot tell you precisely what are the innovations that distinguish the architecture of the new GPU from that of the Adreno 430 of Snapdragon 810. ALU is climbed from 192 to 256, and part of the increase in performance is certainly also due to higher operating frequencies. According to the American company, however, the new Adreno 530 is compatible with OpenCL 2.1, Direct3D 12, OpenGL ES 3.2 and with the newest APIs Volcano.

The increase in the number of ALU it was possible thanks to the use of the production process FinFET LPP to 14 nm which, thanks to a higher density of transistors compared to the more obsolete processes, has also allowed to make numerous improvements to the coprocessors integrated in the SoC.

Numerous functionalities, therefore, will be managed directly by the DSP Hexagon 680, which is designed to guarantee maximum efficiency to the sensor management (eg for pedometer or assisted positioning) and al vector calculation typical of multimedia scenarios (thanks to Hexagon Vector eXtensions, which exploits an architecture VLIW and SIMD). 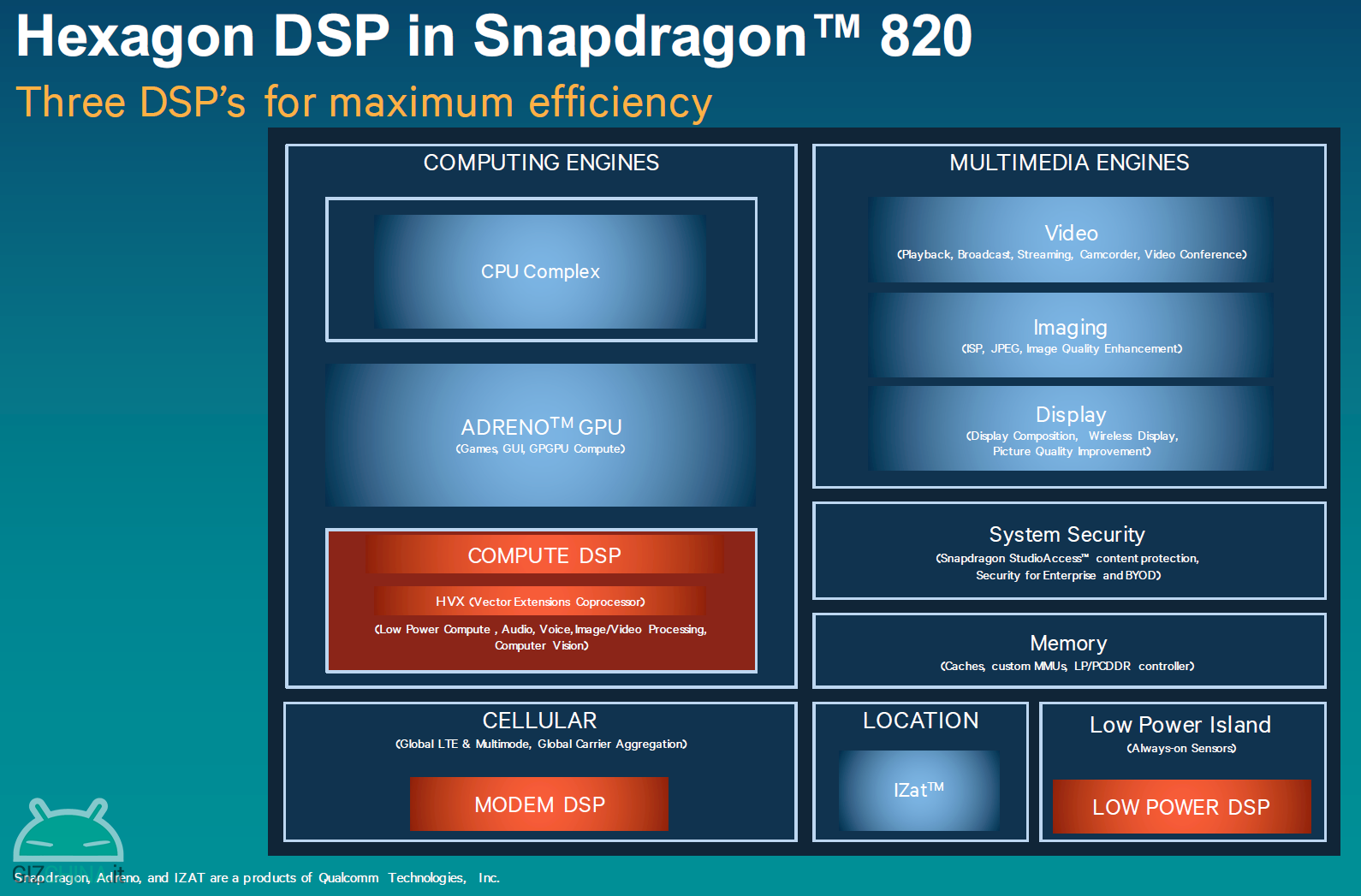 The ISP Spectra, then, now supports thehybrid autofocus (which can take advantage of contrast, phase detection and laser technologies to speed up and improve focus), up to three 14 bit sensors (one front and two rear) and natively includes 3D reconstruction algorithms for acquisitions multi-sensor. Great attention has also been paid to video shooting, which can now be done in 4K (well inferior, however to the resolution of 25 Megapixel allowed by the ISP for photos) with the help of LLV (low light video, algorithm dedicated to low light conditions) and touch to track. 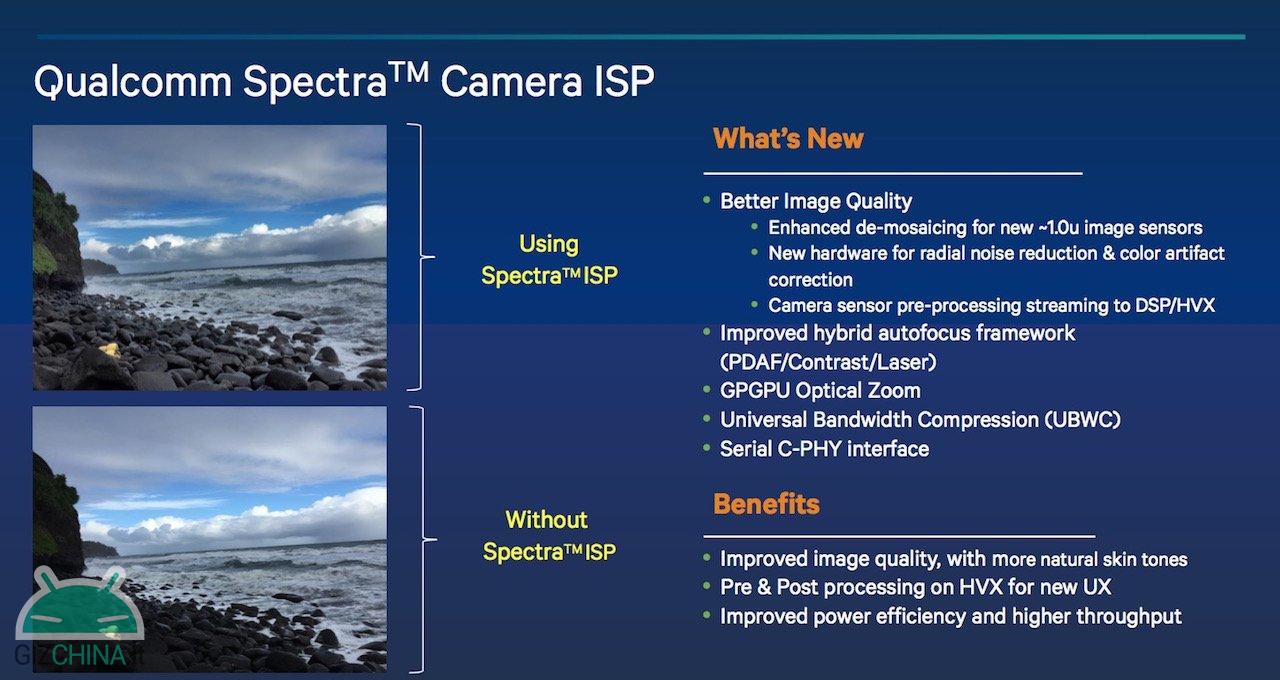 The resolution Ultra HD, on the other hand, it is also the maximum supported by the Display Processing Unit and the Video Processing Unit, with the latter being able to decode movies H.264 e H.265 in this resolution a 60 fps. Finally, there is no lack EcoPix, a proprietary technology dedicated to reducing display consumption.

The long list of technical features of this SoC finally concludes with the implementation of Quick Charge 3.0 (which allows the smartphone to negotiate with the charger a voltage between the 3.6 Volt and the 20 Volt with steps of only 200 mW) and the X12 modem, Compatible with WiFi ac MU-MIMO (2,4 GHz and 5 GHz bands), WiFi (60 GHz) e LTE cat. 12 / 13 (600 Mbps download and 150 Mbps in upload).

This modem also supports the dual sim dual active, the carrier aggregation on three blocks from 20 MHz, LTE-U on unregistered frequencies and has the proprietary Trusignal technology (designed to improve the quality of the radio signal).