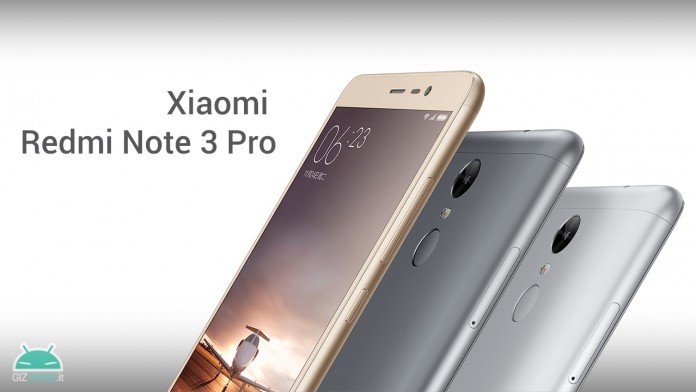 About 1 month and a half away from the publication of the review of the Xiaomi Redmi Note 3 and now at poco less than a month from the official presentation of the highly anticipated Xiaomi Mi 5, we propose today the review of another model of the Chinese company, namely the Redmire Xiaomi Note Pro 3.

The Redmi Note 3 Pro is, as the name suggests, an updated version of the previous model, which, announced in a surprise last 14 January, is equipped with the processor Qualcomm Snapdragon 650 instead of MediaTek Helio X10 and some other “oversized” specifications, on which, of course, we will put more emphasis during this review.

Considering the price more or less in line with the previous model and the improved specifications, can we then consider this Xiaomi Redmi Note 3 Pro the real best-buy of this early 2016? Find out in the review!

The sales box of the Redmire Xiaomi Note Pro 3 it is identical to that of the previous model, i.e. a white cardboard box with the name of the device and a rendered image of the same.

Inside, in addition to the smartphone, we find the following accessories:

The design, the materials used and the layout of keys and inputs do not change. From the "external" observation of the Redmi Note 3 Pro there are no differences compared to the predecessor.

The device is in fact characterized by a body made entirely of magnesium and aluminum alloy, albeit with a slightly reduced thickness and, therefore, more "cheap" than other devices with a metal body.

However, as already pointed out for the "twin" device, on a constructive level we are still faced with a very nice device with a premium appearance.

Also confirmed the display and in fact on the Redmi Note 3 Pro we find an IPS panel with diagonal from 5.5 inches and resolution FullHD 1920 x 1080 pixels (with density equal to PPI 403).

La color reproduction results to be optimal, as well as the level of the maximum brightness, which however is not perfectly managed by the appropriate sensor, a little "lazy" in the settings and slightly "tending to the upside".

The glass protecting the display is on average oleophobic Corning Gorilla Glass 3.

Also on the Pro version of the Redmi Note 3 we find a small RGB notification LED (with manageable colors in the settings) and 3 softouch keys, external to the display and backlit.

As anticipated in the introduction, on the new Redmi Note 3 Pro we find a novelty in the photographic sector. The device, in fact, is characterized by a rear camera from 16 mega-pixels with autofocus PDAF (phase detection), aperture f / 2.0, dedicated ISP processor, double Flash LED e 5 lenses.

The front camera, on the other hand, is characterized by a sensor 5 mega-pixels with opening f / 2.0.

The quality level of the shots taken appeared immediately higher than that obtainable with the Redmi Note 3. The photos taken with the new "Pro" version, in fact, are well defined and sharp, especially in macro mode.

Autofocus does not turn out to be particularly fast, as is definitely the shot.

Also good is the LED flash, which, as on the “younger brother”, illuminates the object portrayed evenly, while slightly distorting the colors.

However, a certain level of photographic noise remains in the shots taken in low light conditions.

On the other hand, the 5 mega-pixel camera with F / 2.0 aperture has been confirmed, but it has improved in performance as it tends to return more realistic colors and, above all, to burn less brightly lit parts of the shot.

On the Redmi Note 3 Pro we find the now classic support Dual SIM (1 Micro + 1 Nano) of the Redmi series of Xiaomi, with the welcome addition, however, the possibility to expand the memory with micro SD.

The second slot, in fact, is shared with the housing for thememory expansion and, therefore, can be used alternatively for a Nano SIM or for a Micro SD card.

Both SIM cards have support for 4G LTE connectivity and the VoLTE technology, ie the possibility of exploiting 3G / 4G networks even during voice calls, thus improving reception and general performance.

As on the standard version, even on the “Pro” reception is excellent and cell changes are very fast, but unfortunately there is no Band 20 (800Mhz).

On the Note 3 Pro we find the Wifi in the “ac” version and the connectivity sector is completed by GPS with A-GPS and Glonass and Bluetooth 4.1 Low Energy. The device also has FM radio. NFC is missing.

Also this new model of the series is obviously equipped with a fingerprint reader and also in this case the sensor turns out to be of excellent quality, ensuring a reading (and, therefore, the release) immediate.

It is possible to register up to 5 footprints and use this security feature to unlock the device and to access the so-called "Child Mode".

Lo Xiaomi Note 3 Redmire It is moved by the processor Hexa-Core Qualcomm Snapdragon 650, a solution equipped with 2 Cortex-A72 core from 1.8Ghz e 4 Cortex A53 from 1.2Ghz. Confirmed the availability of RAM and ROM, again available in the variants of 2 / 3Gb of RAM and 16 / 32GB of internal memory, but this time, as already mentioned, with the addition of the possibility of expansion thanks to the presence of a slot MICRO SD that can be used alternatively to the second SIM.

The version we are testing is the one equipped with 2GB of RAM and 16GB of internal memory. In the coming weeks we will also perform a test with the 3 / 32 GB version.

If we had already reported excellent performance for the “standard” Redmi Note 3, on this Pro version we can detect a further improvement. Also on this device there are no imputations and / or lag and all this is also testified by the excellent results obtained by the Note 3 Pro in the benchmark tests.

The performance improvement is also perceptible in gaming and, in particular, on Real Racing 3 the device reproduces the game elements to the maximum (reflections in the rear-view mirrors, clouds and airship), highlights a fluidity of the highest level (except for some almost imperceptible micro lag) and guarantees a playability close to perfection.

More updated from the software point of view and in fact on the Xiaomi Redmi Note 3 Pro we find Android version 5.1.1 Lollipop customized with the proprietary interface MIUI 7.1.

The ROM, which runs very well on the tested device, boasts the App among its most interesting features Security, through which to manage battery, permits, use of data, etc., one Night reading mode which favors the readability of the display by setting a "yellow filter" (adjustable and applicable only for some applications), the Lite Mode and Child Mode, the latter can also be combined with the security functions related to fingerprint reading.

On the new Redmi Note 3 Pro we find the same battery of the previous model, that is a well unit 4000 mAh high density, thanks to which the device can also overcome the result obtained by the predecessor (except for improvements / worsening following software update).

Autonomy, in fact, exceeds the 6 hours of screen lit with heavy use with 2 SIM active and 4G / 3G data connectivity.

Also in this case it is worth noting the very low level of resource absorption of the device in stand-by.

While we look forward to the launch of the Xiaomi Mi 5 - which will also make its appearance at the MWC in Barcelona - a new device is added to the list of candidates for the best buy title of this 2016 start and it does so by offering top-notch performance and a price that, as usual for the company, is always extremely convenient.

For the moment we have tested the version with 2GB of RAM and the results have already been very satisfying and, therefore, it is reasonable to expect even higher performance from the variant with 3GB.

At the time of writing, therefore, the Xiaomi Redmi Note 3 Pro certainly wins the best buy in its price range and, unlike what is underlined in the review of the standard version, at this moment the upgrade from the Redmi Note 2 could really be worth.

To purchase the Xiaomi Redmi Note 3 Pro you can contact us Topresellerstore.it, store that offers shipping from Italy and 24 months of Italian warranty, as well as a discount usable through the voucher GIZCHINA.

One UI 5.1 official: all the news and compatible models