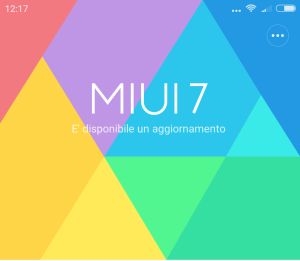 MIUI Italy has officially announced that, thanks to an agreement with Xiaomi, the next builds of the weekly they will support the update OTA.

Definitely updates OTA represent a big step forward for the community behind MIUI Italy thanks also to the work of the members who support it, but it is very important given the increasing presence of the members ROM MIUI especially thanks to the increase in sales of smartphones Xiaomi in our country.

But taking a small step back, what is an update? OTA and what are its advantages?

First OTA represents the acronym of "Over The Air" a term used to identify an update of the operating system that you receive directly on your phone.

For this reason there will no longer be the need to download the update from the site MIUI Italy and then install it on your terminal, but simply use the application "Updater" present in ROM MIUI to check if there are updates of the operating system and eventually install them.

MIUI Italy has, therefore, established a direct collaboration with Xiaomi, which made it possible to use the official platform, to be clear the same that is used for Official ROMs, for the release of the updates. .

In fact starting from ROM 5.11.26 It is important to stress that they will not be received anymore ROM belonging to different development lines, but only those of MIUI Italy reason why the application can be used "Updater" without the worry of being able to mix ROM belonging to other lines of development.

As for the procedures to be followed to make updates OTA of the ROM MIUI Italy in complete safety, we invite you to follow the directions on the official website of MIUI Italy.

What do you think of this new feature of the ROM di MIUI Italy?