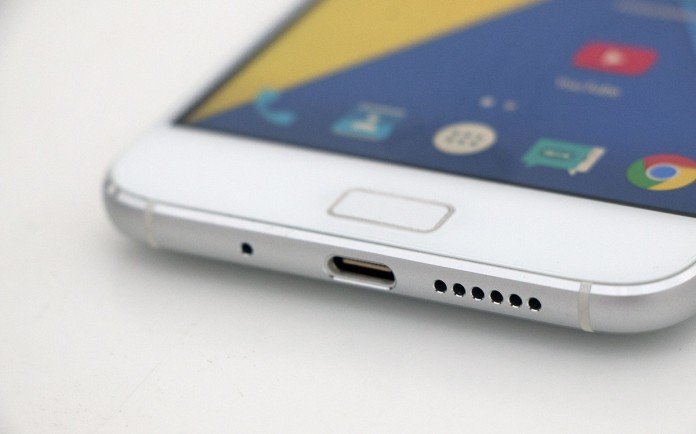 Today we talk about the "second" variant of the Zuk Z1, which is the first smartphone of the newborn sub-brand of Lenovo.

Designed and manufactured in China, Zuk Z1 it is in fact the first smartphone of this new house that promises very well indeed and of which we have already proposed ours review of the Chinese version with Z-UI. 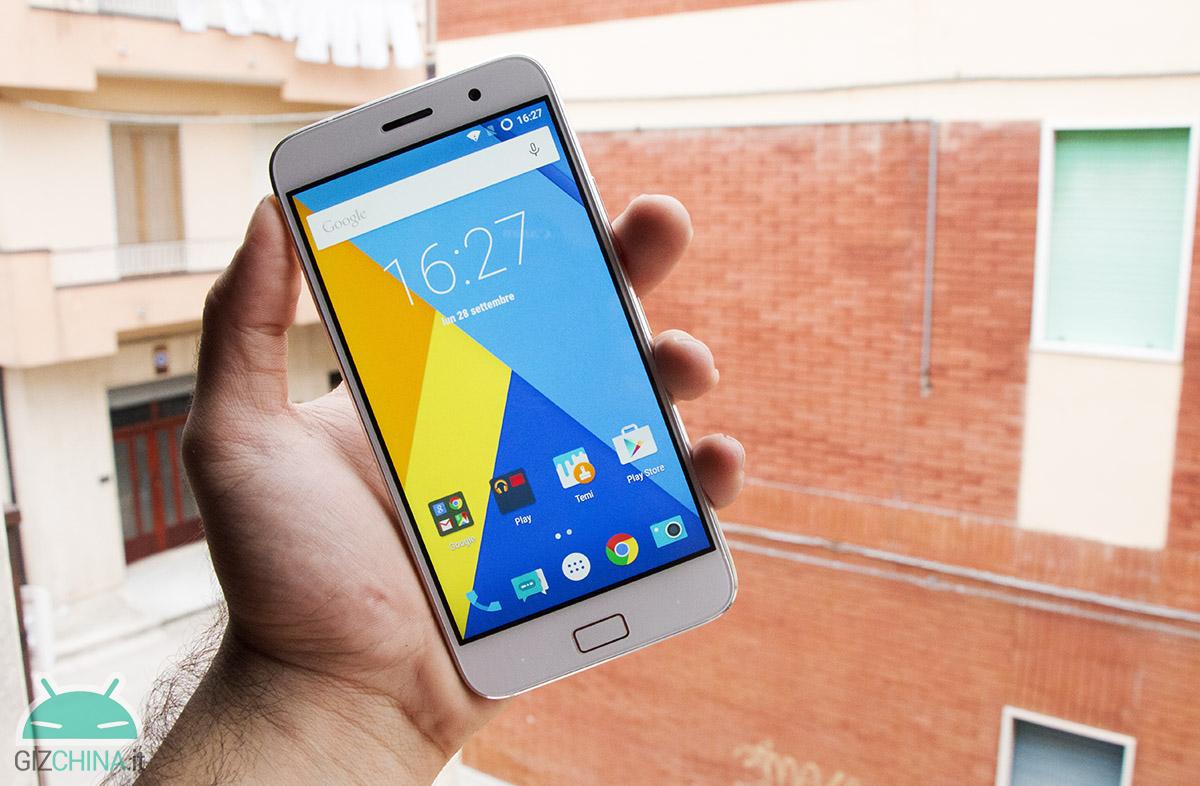 The price is competitive and the hardware, while not in line with the top of the 2015 range, is able to guarantee good performance. Today we will see the review of the Zuk Z1 in international version, or the variant with OS CyanogenMod 12.1.

Will you have convinced this smartphone? you just have to find out in our full review.

Zuk Z1 is available (in Chinese version with Z-UI) on Topresellerstore.it with shipping from Italy and 24 months of warranty and Italian assistance, discounted for you readers through the voucher GIZCHINA.

The version with CyanogenMod 12.1 will be available from the next weeks.

The Zuk Z1 is also available for purchase on Amazon.it with shipping Amazon Prime at the price of 299 € and Gearbest.com, in international version, is currently on offer at the price of only 268 euros (Gray version, here the white version). 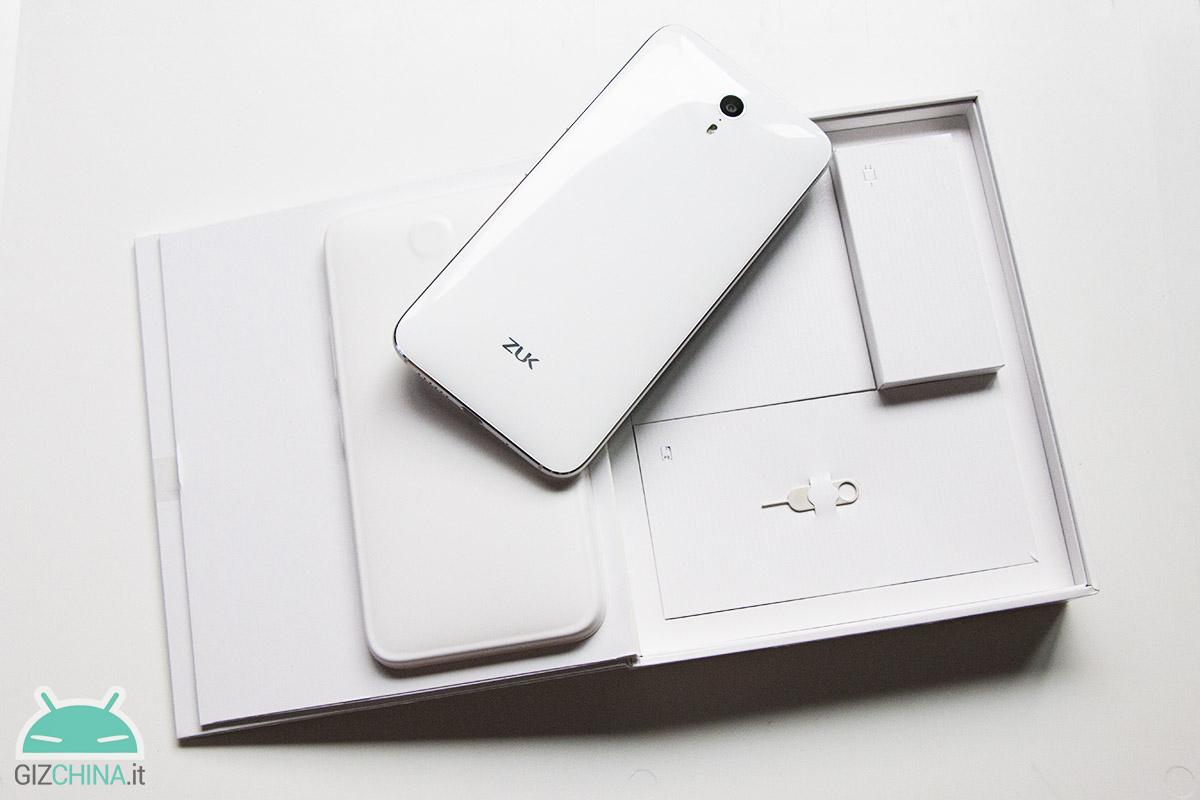 Zuk Z1 is distributed by the company in a very elegant sales package; the box, in fact, looks like a book with real pages and is very similar to that of the Meizu devices that we have already seen in the past.

In any case, inside, we find: 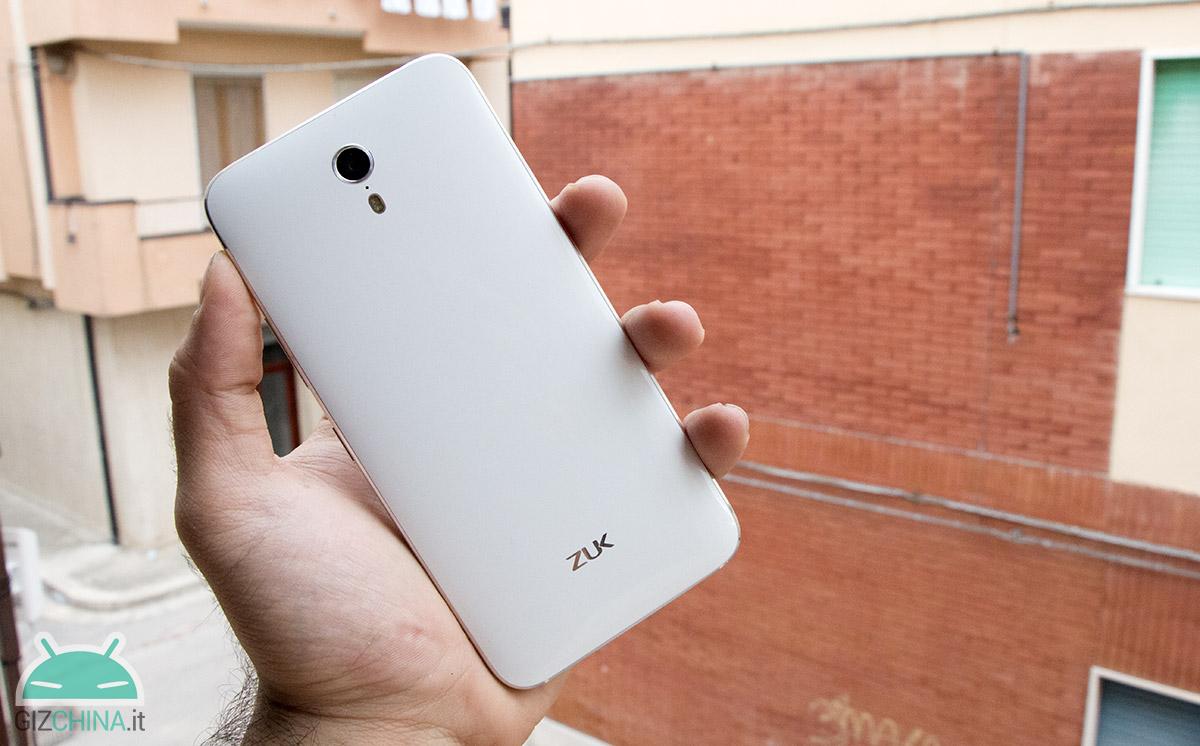 Starting from the form factor and the dimensions, Zuk Z1 is a "big" product, which fits exactly 155.7 x 77.3 x 8.9 mm and with a weight of 175 grams; the display of which it is equipped has a diagonal from 5.5 inches and for this reason the smartphone fits into the phablet sector.

Seeing it from a distance, Zuk Z1 certainly does not convey a premium feeling in materials and construction, but if analyzed carefully and, in particular, if held, it conveys good sensations, as it turns out to be very well built.

Zuk Z1, in fact, is made of aluminum in the side finishes, among other things very elegant, plastic in the back cover back (polished in the white version we tested) and glass in the front.

The finishes are excellent, especially near the physical home button that doubles as a biometric sensor for unlocking the device; beautiful also the side buttons, even if they highlight the movements too much, almost as if they were not firm.

Next, instead, find the arrangement of the buttons on the Zuk Z1. 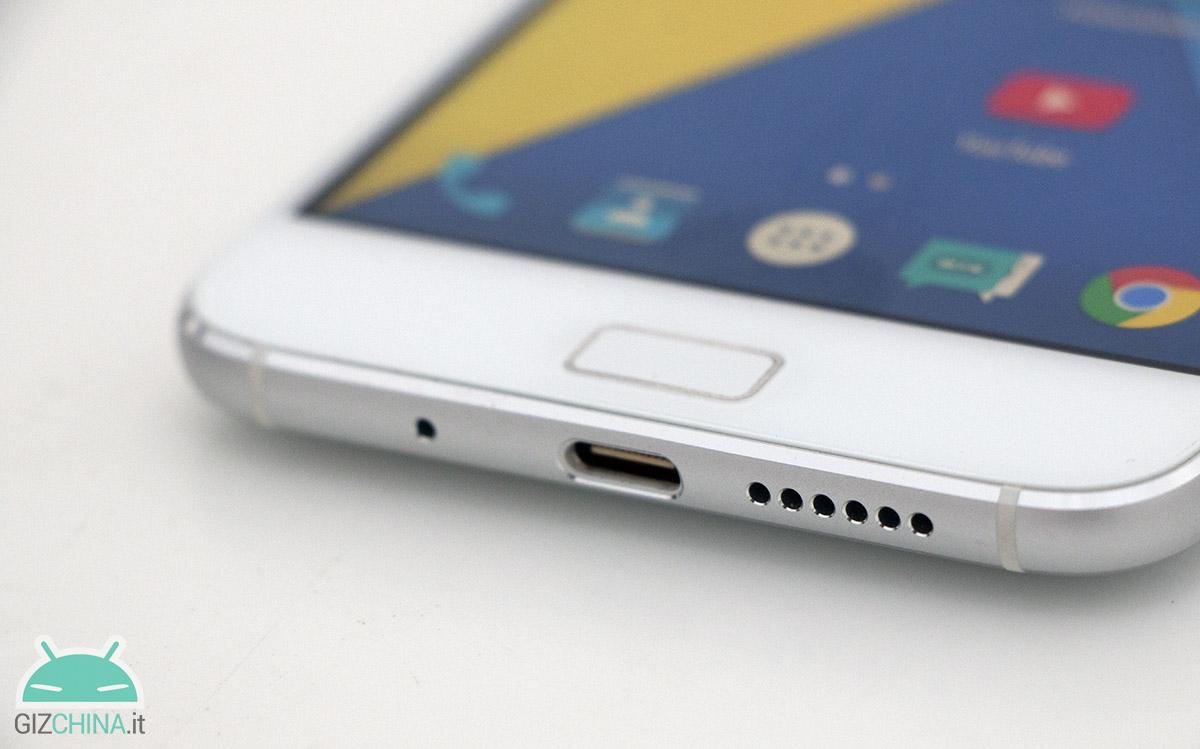 Starting from the bottom of the device, we have available on the Zuk Z1 the system microphone on the left, in the middle the USB Type-C connector and on the right the small holes dedicated to the speaker. 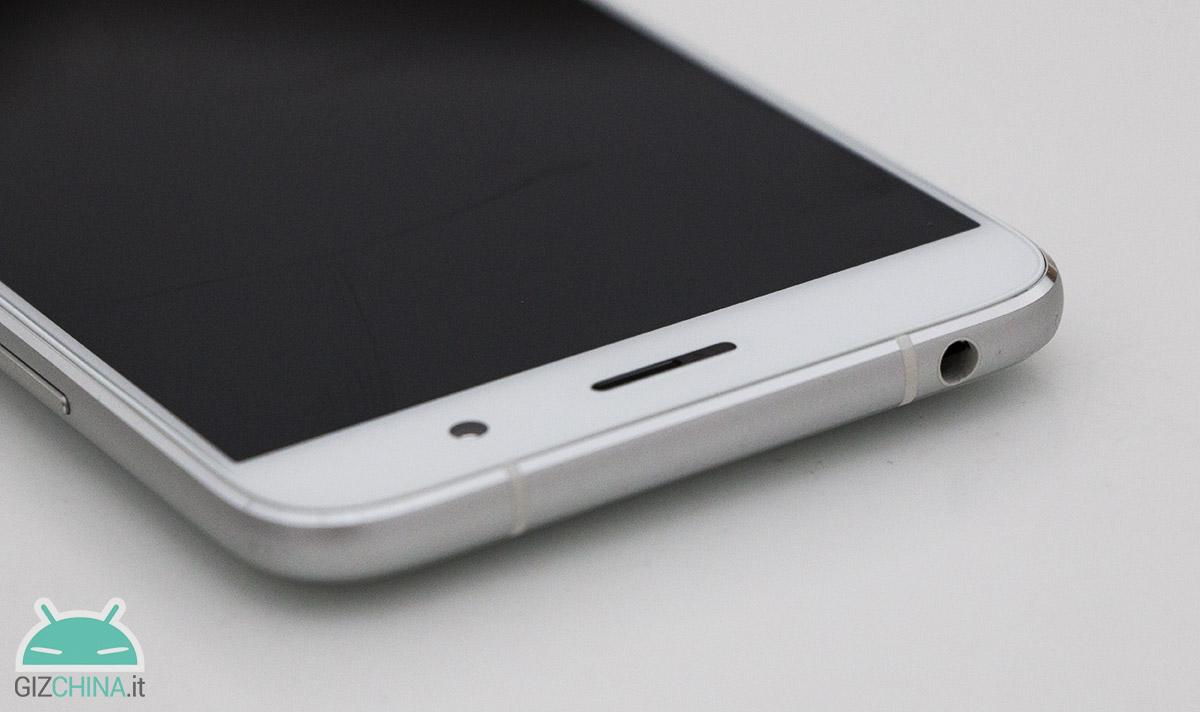 On the upper part, instead, there is the 3.5mm jack for earphones; next you can see instead two small white plastic strips, useful to make better the reception of the smartphone. 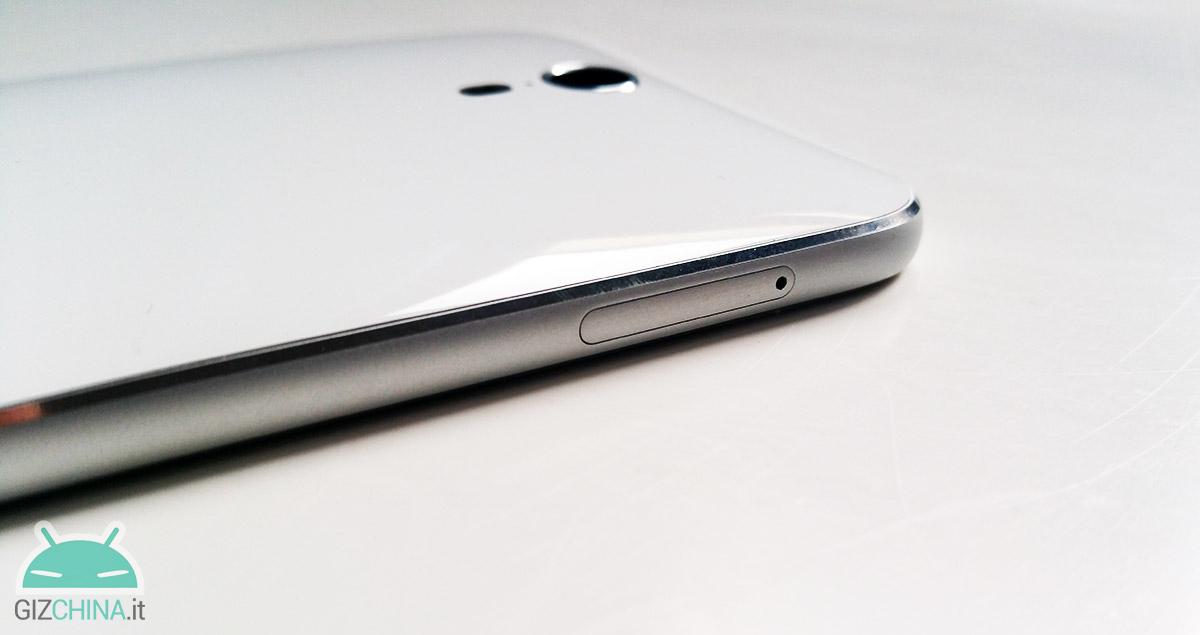 On the left frame of the device there is the trolley useful for inserting the two SIM cards, both in Nano format and both with support for 4G LTE connectivity. 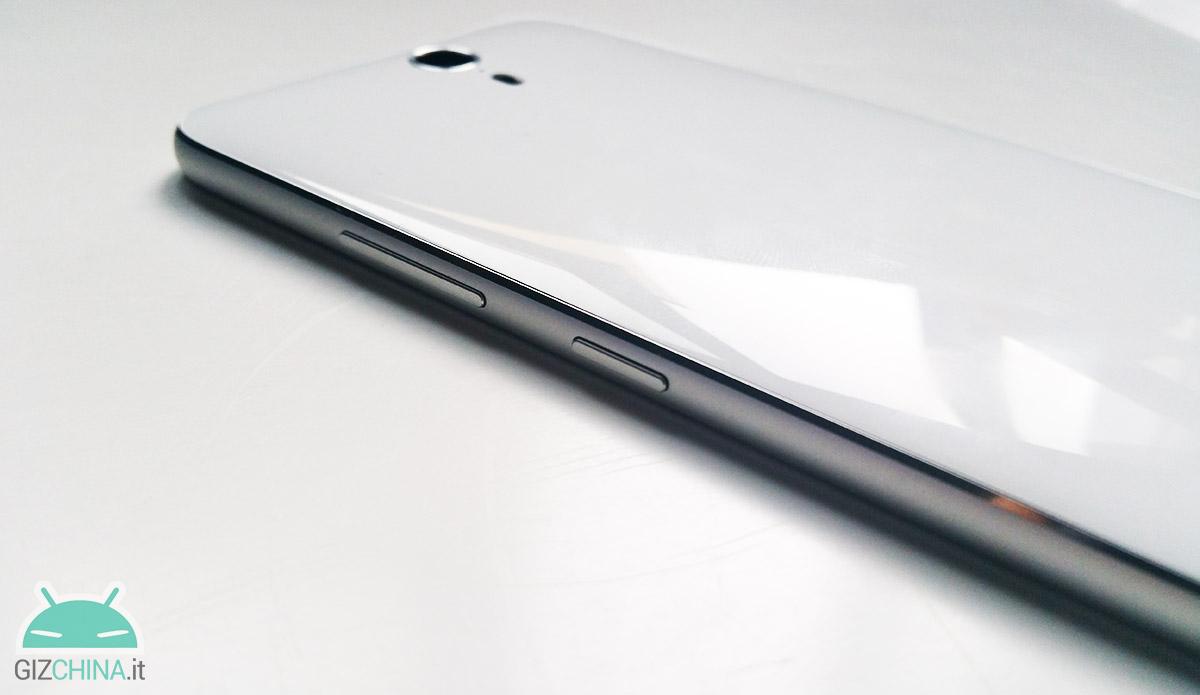 The opposite side, on the other hand, has the rocker arm for adjusting the volume and the button for switching on and off. 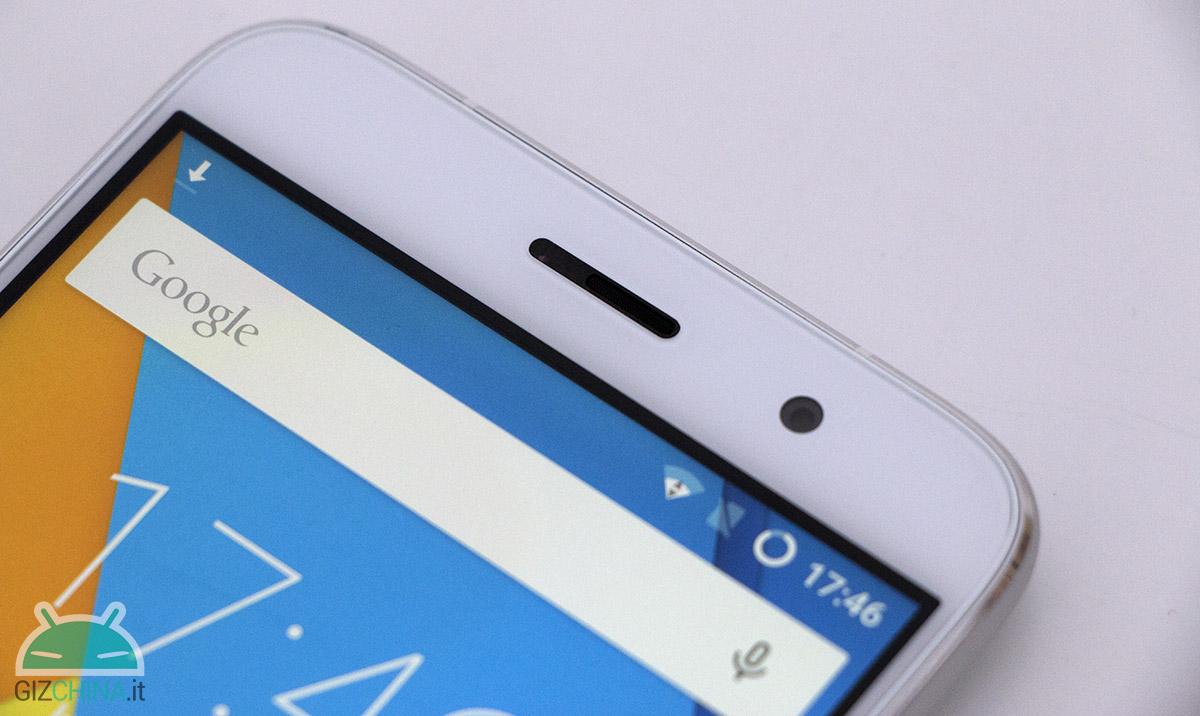 Furthermore, on the top of the Zuk Z1 there is the ear capsule and the front camera from 5 mega-pixels. 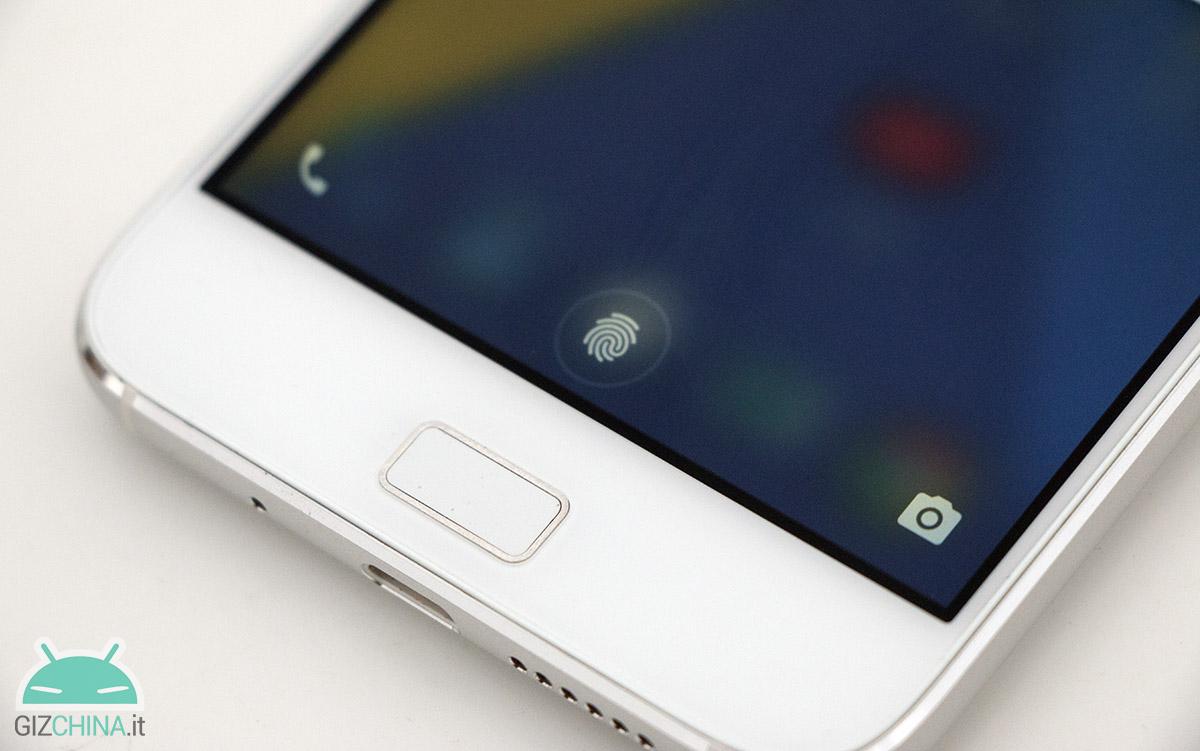 On the lower front part of the device there is instead a central physical button of rectangular shape; as already mentioned, in addition to acting as a Home button, the button integrates a biometric sensor for unlocking via fingerprint. In addition, next to the home button, there are two backlit touch keys. 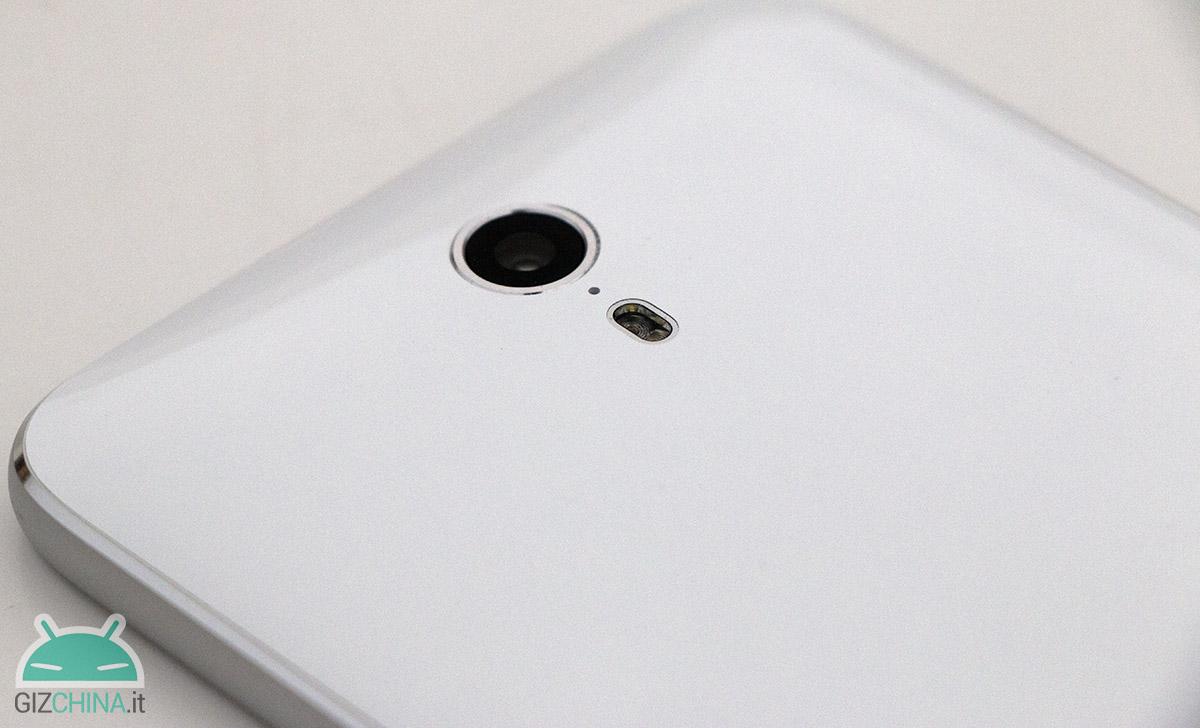 Finally, in the back, we have the main camera from 13 mega-pixels accompanied by a double LED flash and the second microphone for the reduction of environmental noise. 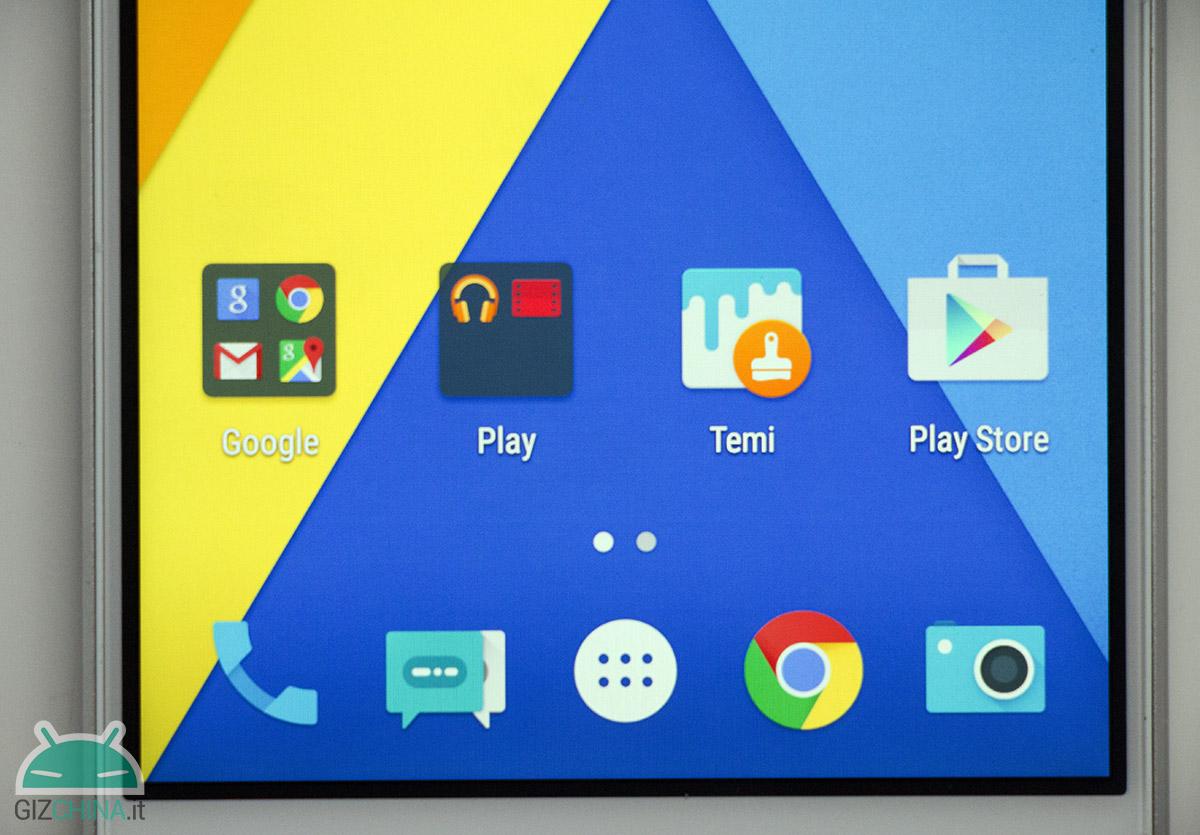 The screen supplied with the Zuk Z1 has a diagonal of 5.5 inches and a resolution FullHD 1920 × 1080 pixels. The panel of this smartphone is of the IPS LCD type.

Besides the technical data, the display must be analyzed in everyday situations; the screen has really good colors and a good calibration, it does not show display problems under sunlight and the viewing angles are excellent.

The maximum brightness is very high, so much so that in some situations the colors are too sharp and cold and may not look good if you compare it, perhaps, to an AMOLED screen. In any case, it is only a matter of personal taste, since, when analyzed individually, the Zuk Z1 has an excellent display.

The Zuk Z1 is equipped with 64GB of internal memory, of which 54.69GB are available, which can be used as usual to install applications and archive data.

Unfortunately, the opportunity to insert a MicroSD is missing, even if, considering the 64GB of internal storage, it is difficult to feel the need.

Zuk Z1 is not really a cutting edge device for the period in which it is distributed or, better, it is not the device with the most advanced technical data sheet of the moment. Zuk Z1, in fact, mounts under the body one Snapdragon 801 Quad-Core from 2,5GHz coupled to 3GB RAM memory.

The mounted GPU is the "classic" Adreno 330 which, coupled with the rest of the components, allows the smartphone to achieve good performance in almost every area.

Starting from the simplest operations, such as consulting e-mails, surfing the Internet and chatting in various social networks, up to the stressful tests such as gaming and benchmarks, the Zuk Z1 does not miss a beat and withstands every type of operation performed.

In the screens to follow, however, you can find the results obtained in the benchmarks from Zuk Z1 putting stress on the hardware it is equipped with.

The aforementioned positioning of the single system speaker supplied with the Zuk Z1 is optimal and such as to guarantee excellent sound propagation, whatever the position in which the smartphone is stored.

The volume of the reproduced sound is good, but not very high and is well equalized in the various frequencies, especially in the bass that sound really good. What is not surprising is the sound effect obtained, almost muffled.

Zuk Z1 is a device dual Sim Dual Standby; double slot for two nano SIM present in the left side frame. Furthermore, the cards can be managed at the software level, as usual, for the "hot switch" of data connectivity.

The reception quality is very good; the smartphone is equipped with support for European LTE networks, but, unfortunately, the fateful 20 band required by some operators is missing in order to take advantage of LTE inside homes, buildings or in the areas most difficult to reach by the signal of some operators.

Wi-Fi, on the other hand, is fast in data transfer and stable in connection; positive speech, moreover, also for the Bluetooth 4.1 of which Zuk Z1 is equipped.

At night the flash works really well and illuminates the subject, or at least the space to be photographed, evenly. Following are all the shots taken from the back room of the Zuk Z1.

They are well 4100 i mAh available to the Zuk Z1 which, despite a similar amperage, maintains a relatively low overall weight and does not excessively increase its size. The supplied battery has shown in these test days a good autonomy and with a stressful use (with both SIM active), made of 3G / 4G network for 70% of the day, it manages to take us until the evening with a good percentage residual.

The hours of screen that you can get with this type of very stressful use are about 3 and a half, but you can reach almost 5 hours with less stressful use and with more Wi-Fi than 3G.

One of the main pluses of this Zuk Z1 is certainly the software one; the Lenovo smartphone, in fact, can count on support CyanogenMod that, in the international version of the device, or what you see in this review, is the official Operating System.

The distribution of Android is the 5.1.1 while the CM comes in version 12.1 with the possibility of making many customizations to the operating system by the user.

Zuk Z1 in contrast to many smartphones from China can potentially be a product for every type of user; the hand of Lenovo in the construction of this Zuk feels and we notice it in every detail.

Zuk Z1 is an elegant smartphone, solid in construction and with software support that is the envy of many other manufacturers.

A product without a doubt recommended, free of bugs and defects of youth; in short, we liked it. And what do you think? Tell us yours in the comments.

Zuk Z1 is available (in Chinese version with Z-UI) on Topresellerstore.it with shipping from Italy and 24 months of warranty and Italian assistance, discounted for you readers through the voucher GIZCHINA. The version with CyanogenMod 12.1 will be available starting in the next few weeks.

The Zuk Z1 is also available for purchase on Amazon.it with shipping Amazon Prime at the price of 299 € and Gearbest.com, in international version, is currently on offer at the price of only 268 euros (Gray version, here the white version).

In addition, the device is also available on the official distributor website zuk-store.com. The product will be shipped directly from Europe (from Belgium) and, therefore, no additional costs will be charged for customs.