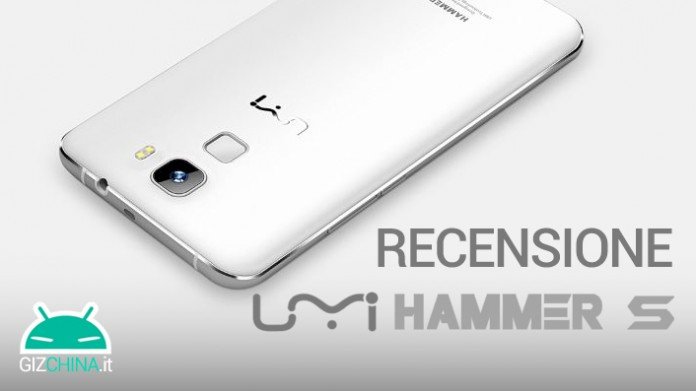 Umi Hammer updates and gains an S by enriching the USB Type-C and a fingerprint unlocking sensor. The size and the battery are growing, but in contrast the processor takes a step back from the standard model.

Let's find out for this UMI Hammer S how many novelties can be hidden behind the addition of a single letter, for better or for worse.

Simple and essential. The Umi Hammer S package reflects its content, as well as the very essence of the smartphone. Dark hardcover, with only the logo, which contains a second light colored box. 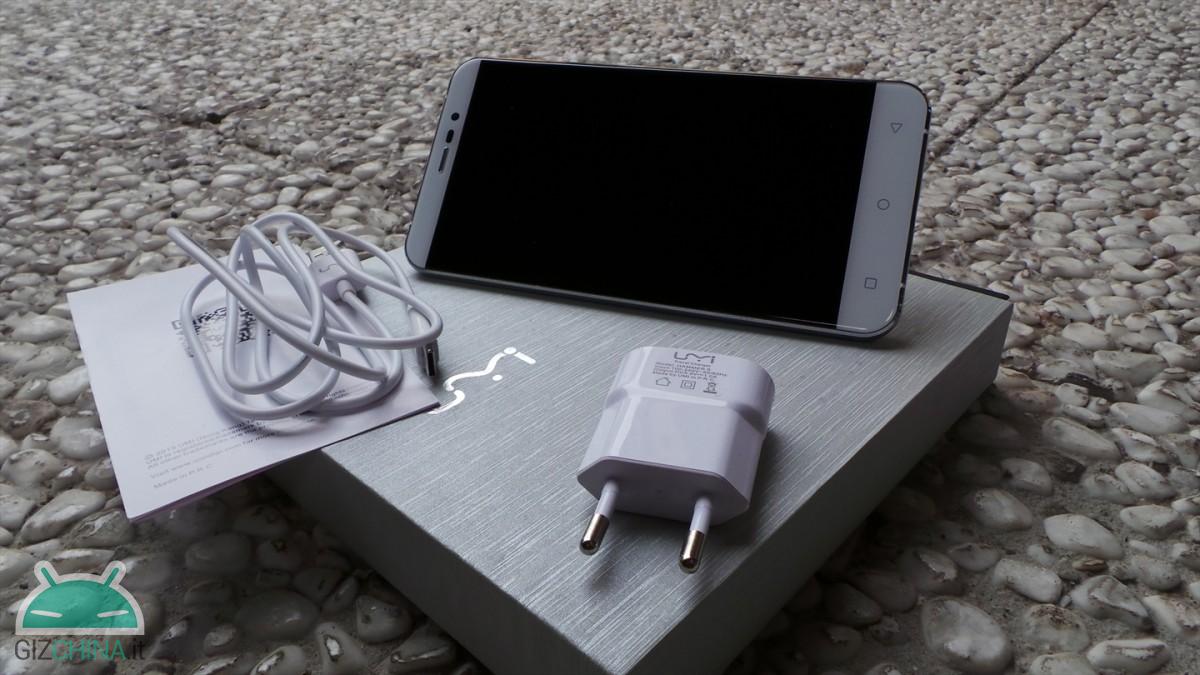 Equipment, therefore, reduced to the bone for a device that perhaps sacrifices some aspects to the altar of news in the low end of the Android market.

Granitic. This is the first sensation offered by Umi Hammer S at first contact. This is all due to a mix of size, weight and aluminum frame. 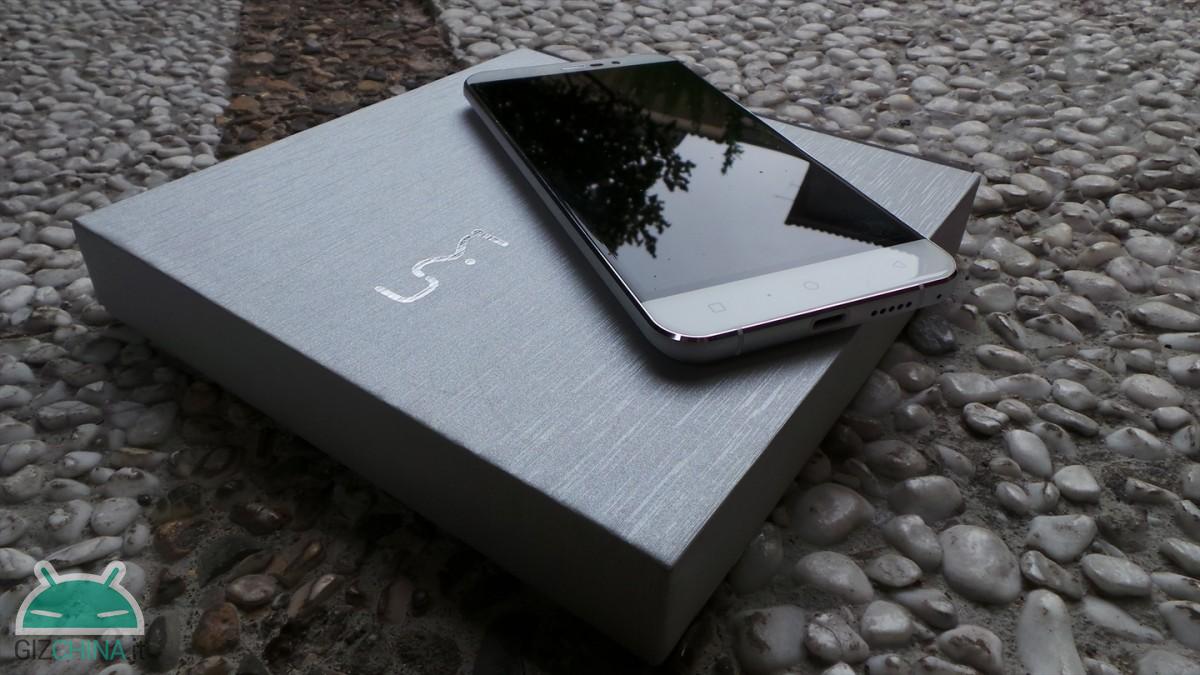 On the front we have the 5.5-inch IPS HD display that dominates the soft touch keys - Options, Home and Back - unfortunately not backlit and, as is customary for smartphones in this price range, in "silent" mode they lose the vibration feed.

Present the front camera from 3.2 megapixel together with the canonical sensors of brightness and proximity and the capsule earphone.

The profile of the smartphone is surrounded by an aluminum frame, with polycarbonate inserts to facilitate communication of the antennas. The right side houses the power button and the volume rocker, also in aluminum.

The left side is completely clean. The choice is appreciable in terms of cleanliness and design, making the smartphone profile more pleasing to the eye.

In the middle, the USB Type-C port is housed in the middle, while on the right the system speaker, accompanied by the microphone.

Superiorly there is the housing for the 3.5 mm jack accompanied by the infrared emitter, quite unusual in this price range!

On the back we find the main camera from 13 mega-pixel, embedded in a metal frame and slightly protruding from the body of the Umi Hammer S, together with the Double Led Flash. On the same axis of the camera we find the fingerprint unlocking sensor, the manufacturer's logo and the smartphone model. The backcover has a completely rubberized finish, very pleasant to the touch and able to offer an excellent feed.

The materials of the bodies alternate the polycarbonate, with rubberized finish used for the backcover, to the noblest aluminum for the realization of the frame that surrounds the whole profile of Umi Hammer S with a frieze that surrounds the upper and lower part of the device.

The front, on the other hand, is dominated by a mineral glass, with a 2.5D curvature, beveled at the sides. The choice to adopt a curved glass always helps in terms of the elegance of the device. However, on Umi Hammer S unfortunately the aluminum edge is slightly raised compared to the front glass and does not make you appreciate the stylistic choice of the glass with 2.5D curvature. 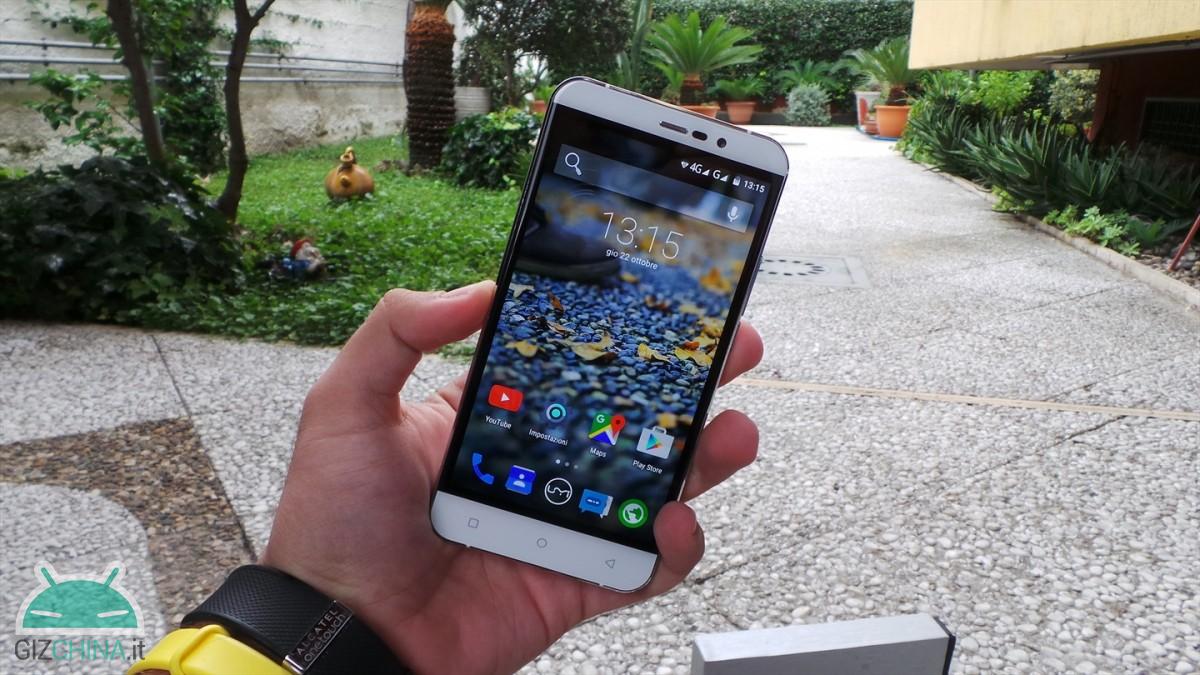 Ergonomics is not enough! The weight / size ratio of 200 grams and 8.5 mm beautiful thickness prevent you from using Umi Hammer S with pleasure. On the other hand, the high weight and solidity given by the aluminum frame give the smartphone a granite look, so much so that it looks not to be afraid of bumps or falls (which is however best avoided ...) 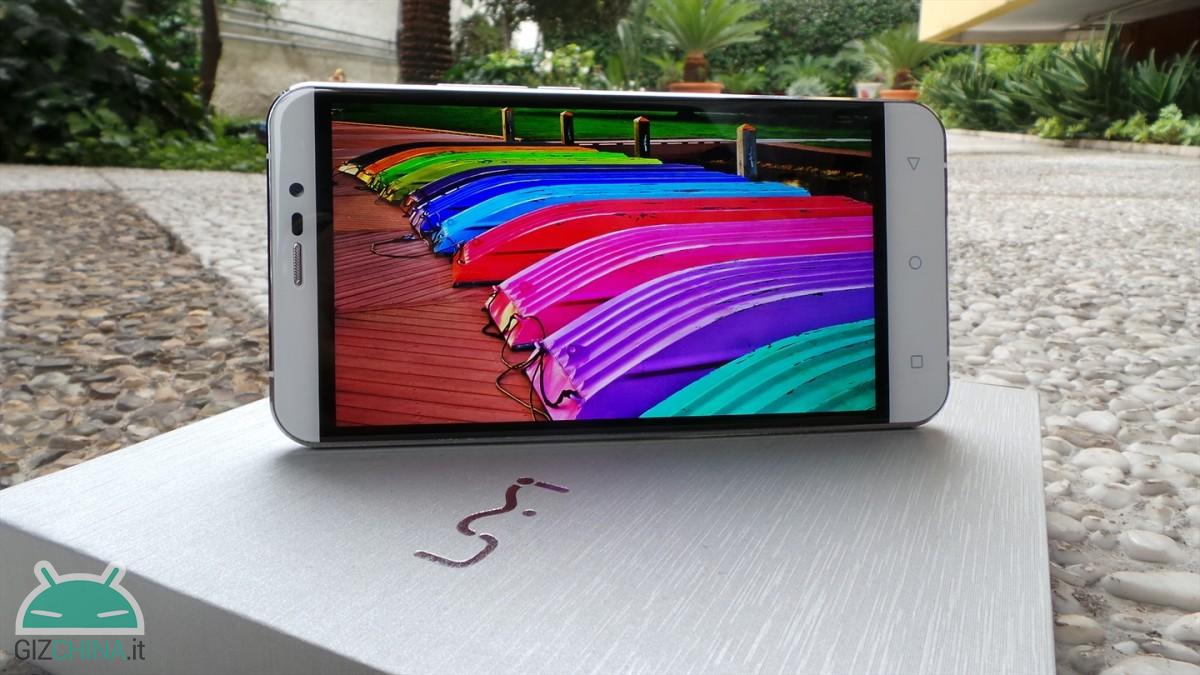 The data is certainly not on the side of Umi Hammer S. The color calibration is very natural, typical of IPS displays, and the viewing angle is average. The brightness sensor is a bit lazy in changing and adjusting the brightness. Recommended, perhaps, to keep the level on average.

Also present is the customization mode through Miravision Technology with the ability to customize the color calibration and activate the dynamic contrast.

There is not much to say about the software. The homa is the most classic "3 Launcher" on which the software of many devices powered by MediaTek is based. Nice choice by the manufacturer to have chosen the CyanogenMod 12 icon package, a little more consistent with the Android Lollipop Material Design.

The device has root permissions already activated, a plus not from poco especially for those who love modding.

The rest of the software customizations are the same that we find on most products moved by MediaTek hardware, with a series of smart features to awaken the device.

As anticipated, the endowment of Umi Hammer S is certainly not at the top, but still in line with the competition. The processor that moves the system is a MediaTek MT6735 based on technology Cortex-A53 and 64-bit with a maximum frequency clock of 1 GHz. The video part is entrusted to one GPU Mali T-720 while memory RAM is from 2GB.

Here is the result of the other Benchmarks performed:

The Umi Hammer S camera boasts a sensor Sony IMX179 from 8 mega-pixels, interpolated to 13, with autofocus and with a double Led Flash supplied. 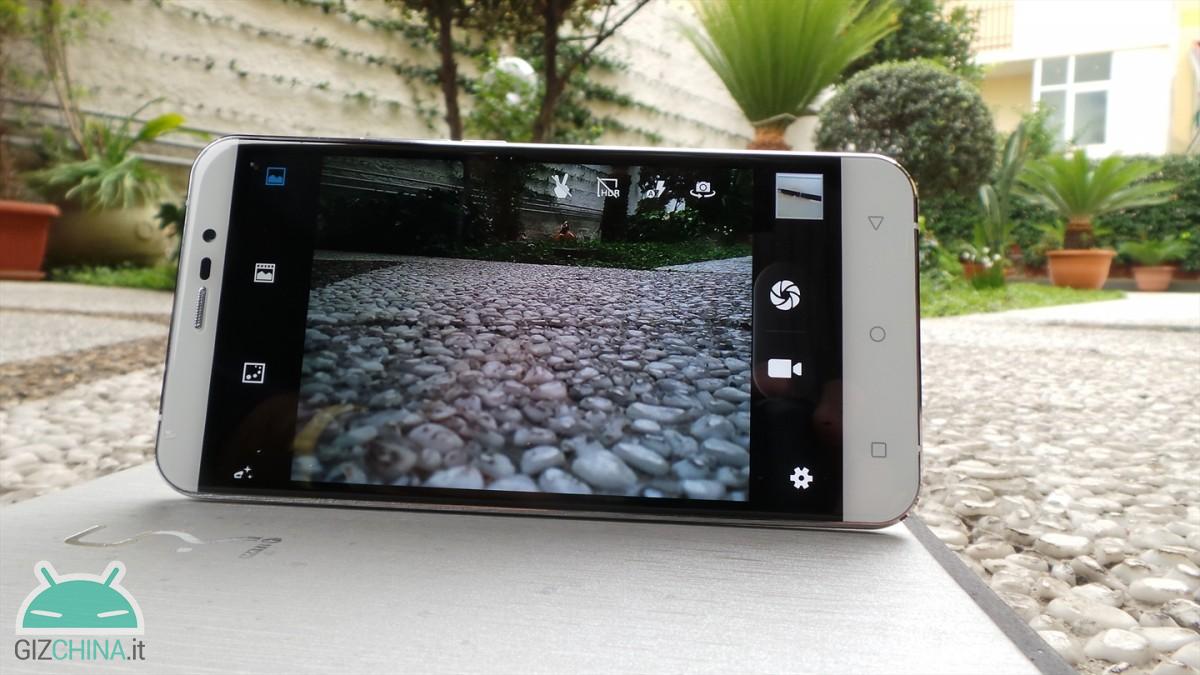 Although the sensor is not among the best performing that Sony has churned out in this 2015, the photos are of good quality. The shots in "macro" also manage to offer a good level of blur, which can also be appreciated on a PC or TV screen. The video part does not reach beyond 720p during video recording with a quality that is not exactly excellent.

The front camera is a 2 mega-pixel, interpolated to 3.2 megapixel, which certainly can not be called a selfie camera.

The camera software is the stock of MediaTek devices, which we know very well since it is in common with many other smartphones equipped with this hardware base.

The Gallery presents the typical customization of the devices with MediaTek hardware with the animations of the videos being scrolled, an aspect that is always pleasant to see. The videos are played without any problem, some audio codecs are missing for the .MKV videos.

The Music Player has not any noteworthy customizations, but even a return to the old Android Music Player of the previous versions of the actual software. Audio playback does not fully convince. Good volume but sins in medium and low tones.

From the east with fury the Hammer S Stock Browser is once again based on the stock Android one. The choice is not among the "best performing", even if for a very bland internet browsing it can still be fine. 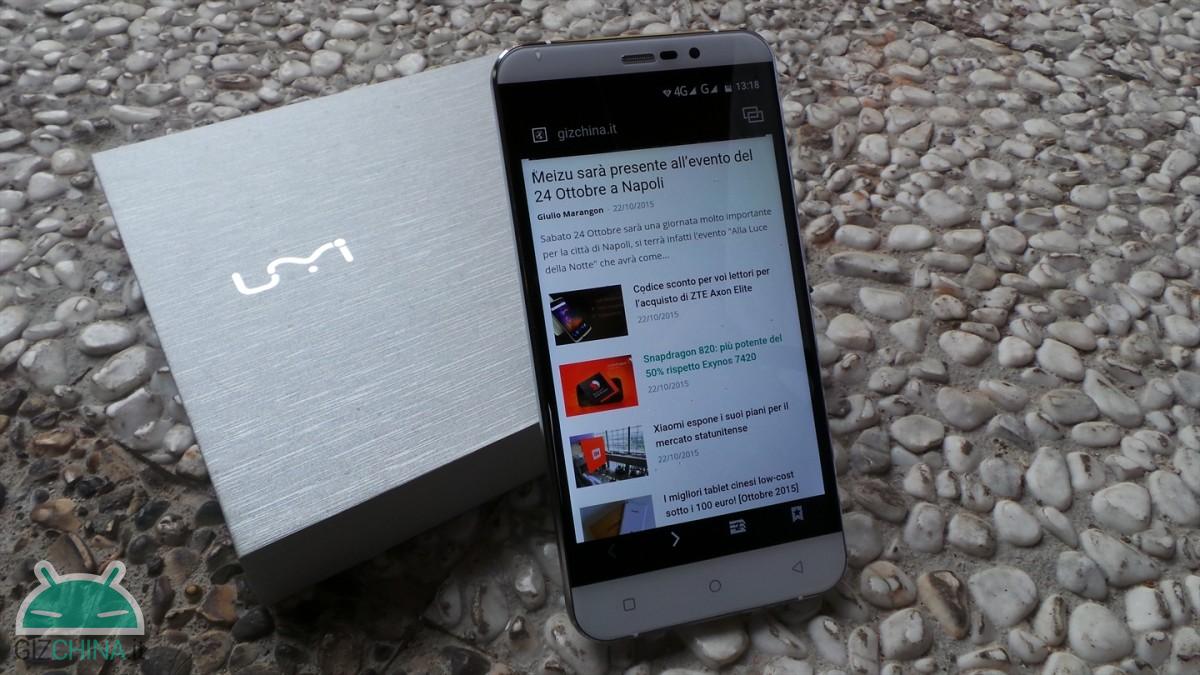 If instead we are used to switch between tabs, and maybe we are not used to close them, we recommend using Chrome, which, although it requires more resources, certainly behaves in a more performing manner.

The autonomy of Umi Hammer S is certainly the strength of the smartphone. It is very difficult to stay “out of energy”. There are 3200 mAH of battery made available to the user, which does not disappoint expectations, thanks to the processor poco energy-consuming and the display density quite low. 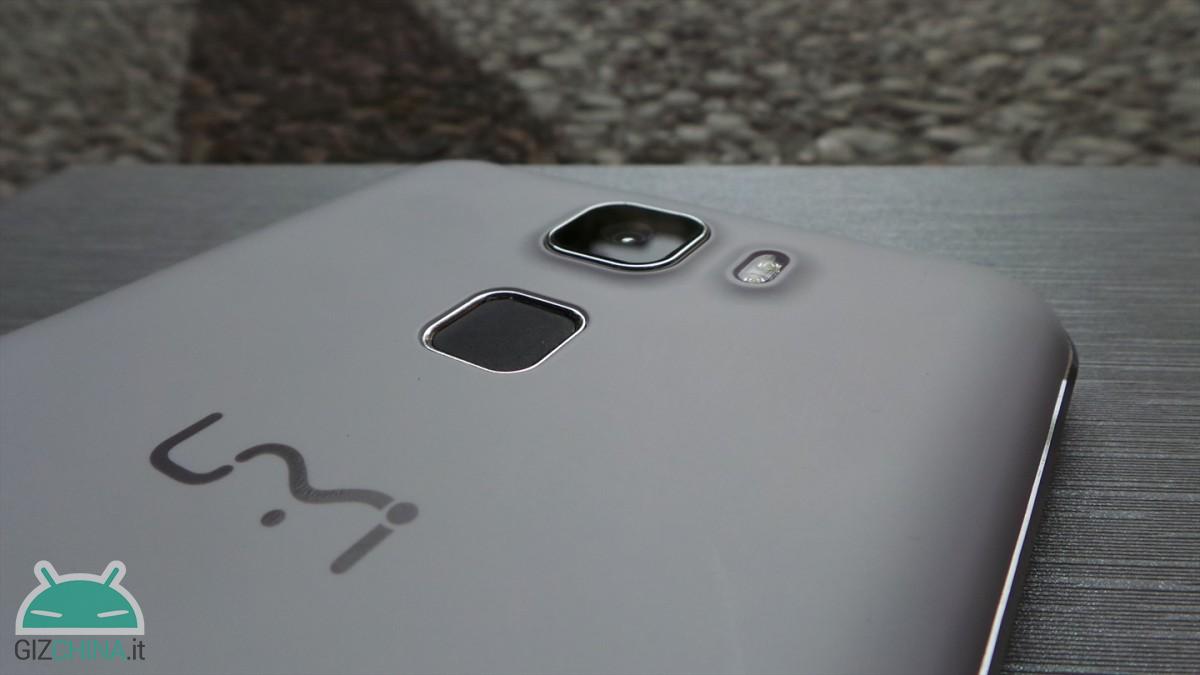 The stress test ended with flying colors with about 30% of autonomy remaining. With milder use it could cover more than half of the second day of use.

Office part completely not received. A File Manager is missing, as is an Office file manager. Fortunately, the Android Play Store intervenes to our rescue by proposing valid alternatives, even free.

The first impression is the most important and it doesn't change. Often this is the case but it is not the case with Umi Hammer S. At first glance you have the idea of ​​finding yourself in front of a granite smartphone, which is worth the approximately 160 euros required, but which in comparison with the best devices of a similar price range comes out (for now) defeated. 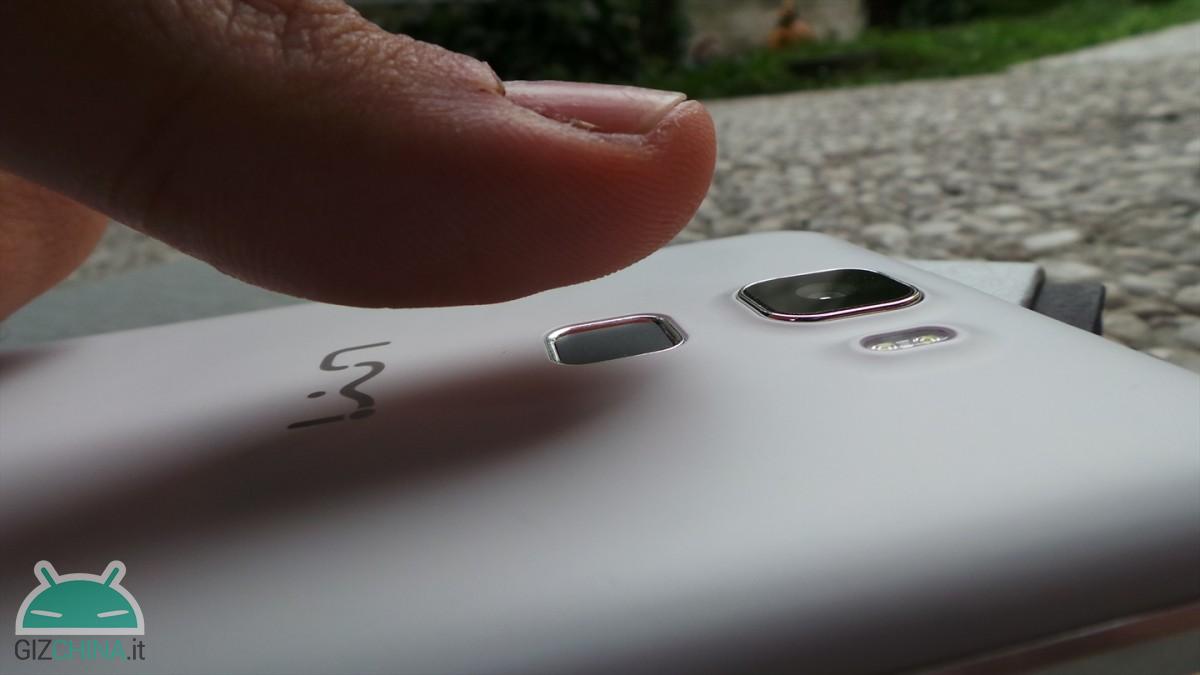 The idea of ​​being in front of a rocky and resistant smartphone is confirmed, but under the "bark" there are still some problems to solve. The performances are acceptable and the hardware novelties, like the USB Type-C and the sensor of release through fingerprints, are badly exploited and therefore do not give the device that plus that was expected.

The plus, compared to other competing smartphones, is instead guaranteed by the presence of an infrared port and by the root permissions present in the factory.

The premises are many, but there are still some aspects to work on. However, nothing can not be resolved or improved through software updates, especially considering that the tested one is a pre-production sample.

L'UMI Hammer S is available in pre-order on Topresellerstore.it (with shipping from Italy and 24 months of warranty and Italian assistance), store where you can take advantage of a discount code (on all products in the catalog) through the voucher “GIZCHINA".