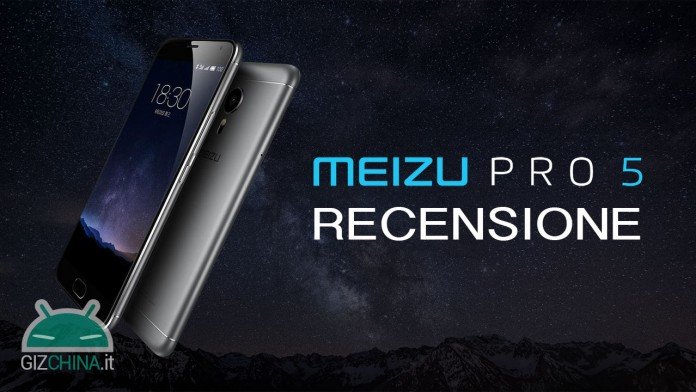 A poco more than a week from the launch of the device, today we offer you a new exclusive from GizChina.it, or the highly anticipated review of the new Top of the Range from Meizu, Meizu Pro 5.

The Pro 5, here reviewed in international version, is characterized by a specific package of the highest level, but it will be necessary to check whether what is reported "on paper" also corresponds to the performance of the same level. Let's find out together in the review below!

The design of the Pro 5 clearly reproduces the lines of the previous Meizu MX5, but obviously with the increased dimensions, given the upper diagonal display.

We speak, in fact, of a device that measures 156.7 x 78 x 7.5 mm thick, for a total weight of 168 grams battery by 3050mAh included. A weight, therefore, not "record", but not excessive and well balanced on the entire surface of the terminal.

The back shell of the device is a metallic monobloc made with a diamond cut and characterized by a subdivision into 3 blocks, two of which, the upper and lower, built with an apparently plastic material (slightly rough to the touch), obviously to avoid shielding the antennas.

The metallic finish of the Meizu Pro 5 backcover, while ensuring the device elegance and "premium" appearance, turns out to be a bit slippery, especially in the one-handed handle.

The display supplied with the Meizu Pro 5 is a unit Super Amoled with diamond matrix from the wide diagonal of 5.7 inches, characterized by one curl 2.5D, a resolution FullHD 1920 x 1080 pixels and a density of 387PPI.

In the various days of testing that of the Pro 5 turned out to be an excellent panel, characterized by an equally excellent reproduction of the entire color range, with good viewing angles and with only a slight change in white at the most extreme angles.

The overall brightness is excellent, even if the sensor for automatic regulation, albeit reactive, turns out to be a little "tending to fall". Also good display with panel exposed to direct sunlight.

The Pro 5 display is also protected by a glass Corning Gorilla Glass 3, on which a good oleophobic treatment.

The touchscreen is very responsive and precise, and in fact the Pro 5 is free from Ghost Touch, lag or jamming phenomena.

The sample under test is equipped with 32 GB of internal memory of type UFS 2.0, expandable thanks to the presence of a micro SD slot (up to 128GB) and all allocated in a single partition.

However, the use of a micro SD card will represent the automatic renunciation of the dual SIM support, as the memory card slot is shared with that of the first "phone card".

Under the elegant metal body of the Pro 5 we find a powerful processor octacore Samsung Exynos 7420 a 64-bit, a chipset with architecture big.LITTLE (4 Cortex-A57 core clocked at 2.1Ghz and 4 Corte-A53 clocked at 1.5Ghz) and production process at 14nm, flanked by one GPU Mali-T760 MP8 and 3 o 4 GB of RAM DDR4 depending on the version.

Our sample is the 3GB RAM and 32GB internal memory variant. The 4GB RAM version is equipped with 64GB storage.

The hardware combination leaves poco space for chance and in fact the system of the Meizu Pro 5 turns out to be not only extremely fluid, but also characterized by excellent management of operating temperatures.

The temperature measurements you see in the picture were performed after the download and execution of the Real Racing 3 benchmarks and test that follow.

Unlike the previous Meizu MX5, the laser autofocus appears better optimized and, therefore, faster and more reliable in focusing.

The front camera is instead a sensor Omnivision OV5670 da 5 mega-pixels with opening F / 2.0 which guarantees excellent selfies, even in poor light conditions.

The numbers and the "pixellaggio", therefore, are all there to make that of the Pro 5 an excellent photographic sector. But let's see how the device behaved in the shots.

In general, the shots taken with the Pro 5 are almost always of an excellent level and in almost all shooting conditions.

HDR is well implemented, which, in most cases, improves the color rendering and general exposure of the shot, excellent macros, good reproduction of the outlines of distant subjects in panoramic shots, therefore, in general an excellent sector photographic.

Complete gallery of shots taken with the Meizu Pro 5

As has happened on previous occasions, we are seeing problems uploading the video recording test to 4K on YouTube. The video is blocked on the processing phase.

Il Meizu Pro 5 is equipped with a double SIM slot, both in format Nano and both with support for connectivity LTE (up to 300Mbps). The connection of the signal is very fast, even when changing the cell on the move and, as already seen on the MX5, it is possible to switch the connectivity hot LTE between one SIMs. and the other through the appropriate menu in the system settings.

Excellent quality of the audio in call, both in the ear capsule and that captured by the microphone.

Loud and clean speakerphone volume, absolutely distortion-free even if set to the maximum level. The audio in the headset is also excellent, both in calls and in musical use. The Meizu Pro 5, in fact, is equipped with a dedicated audio chip ES9018K2M (the same as the Meizu MX4 Pro and the Xiaomi Mi Note Pro) with a professional amplifier OPA 1612, which guarantees a powerful, clean and balanced sound in headphones.

However, the connectivity sector of the Pro 5 also hides the main bug detected on the device, that is a problem related to the dual SIM and, more generally, to connectivity.

The first concerns the occasional complete loss of the signal (very rare), which forces a restart of the device to restore the correct network functionality.

The second, also very occasional, is related to the impossibility of making voice calls when both SIMs are active, as the attempt to execute the call generates a crash of the dialer. To solve this, it is also necessary in this case to restart or deactivate one of the two SIM cards.

The two bugs, of course, are software in nature and, therefore, resolvable facilities. Furthermore, it is right to emphasize that the ROM with which the Meizu Pro 5 is equipped is not yet the definitive one, As the international version of the device will be launched on the market with Flyme 5.0 out-of-the-box.

The connectivity compartment of the 5 Pro is completed by the Dual band WiFi a / b / g / n / ac, Bluetooth 4.1 with CORN, NFC e GPS, all fully functional and characterized by good performance.

The battery supplied with the Pro 5 is a non-removivable unit from 3050mAh, for which Meizu has guaranteed in the phase of launch of reduced consumption and, more precisely well 8 hours of screen lit.

The autonomy of the device is good, but the 8 hours of screen on are not currently guaranteed and this, probably, because Meizu was referring to the use of the 5 Pro with the Flyme 5.0 installed.

At present, with the Flyme 4.5 on board, the Meizu Pro 5 allows you to easily cover a day of intense use and, more precisely, more than 4 hours on screen turned on, which, for most users, could represent up to 2 days of softer use.

Obviously the results reported refer to use with both active SIMs, 90% in 3G / 4G (10% in WiFi) and with a switch between balanced mode and performance (50% of the time with one and 50 with the other).

Battery of the Pro 5, therefore, promoted, obviously waiting for the test with the Flyme 5.0.

One of the novelties of this Pro 5 is also the provision of a door USB Type-C, Equipped with MCharge 2.0 (Meizu's "Quick Recharge") thanks to which it will be possible to recharge the device from 0 to 100 in about 1 hour and 15/30 minutes.

Talk about the software that comes with the Meizu Pro 5 maybe poco sense, as on the device we find "temporarily" installed, as already mentioned, the Flyme 4.5.4i based on Lollipop 5.1. In fact, the update for the Pro 5 to the new interface is expected in the coming weeks Flyme 5.0, of which, of course, we will publish a detailed focus.

However, despite being a "temporary" software, the judgment on the Flyme installed on the Meizu Pro 5 is still positive, because, except for the previously reported bugs, the ROM is very fluid and, in general, stable.

With the Pro 5 Meizu has officially launched the challenge to the world's Top Brands, equipping its new Top of the Range with a very high level and very well optimized hardware. In fact, regardless of the abbreviations and numbers (for example the benchmarks), the consistency detectable in the Meizu Pro 5 between technical data and performance makes the device "the smartphone to beat" in the imaginary mobile phone championship.

In short, a device that "succeeds" where many other smartphones have shown the side and that is a candidate for the title of best Top of the Chinese range (and, perhaps, not only) of the 2015.

Obviously, the full judgment on the Meizu Pro 5 is postponed after the test with the Flyme 5.0, as the software currently installed is not designed for the release of the device and, therefore, not evaluable at 100% in the economy of this review.

As for the availability on the Italian market, we are waiting for more information from the official national dealer Meizumart.it.