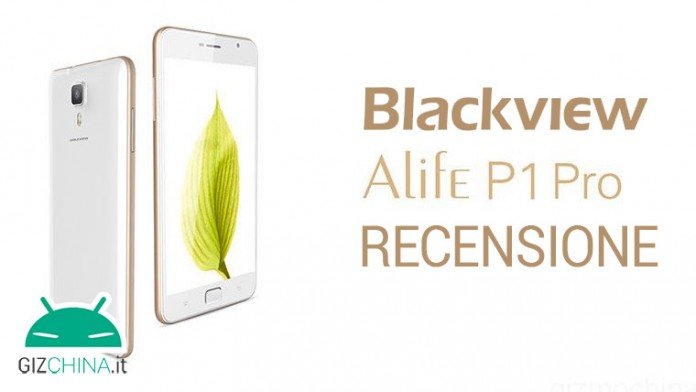 After talking about the Doogee Valencia 2 Y100 Pro, today we analyze a very similar device, both in terms of price and features: Blackview Alife P1 Pro.

Fingerprint sensor, 3000 mAh battery and Android 5.1 Lollipop are just some of its features. Let's see it in detail in our full review! 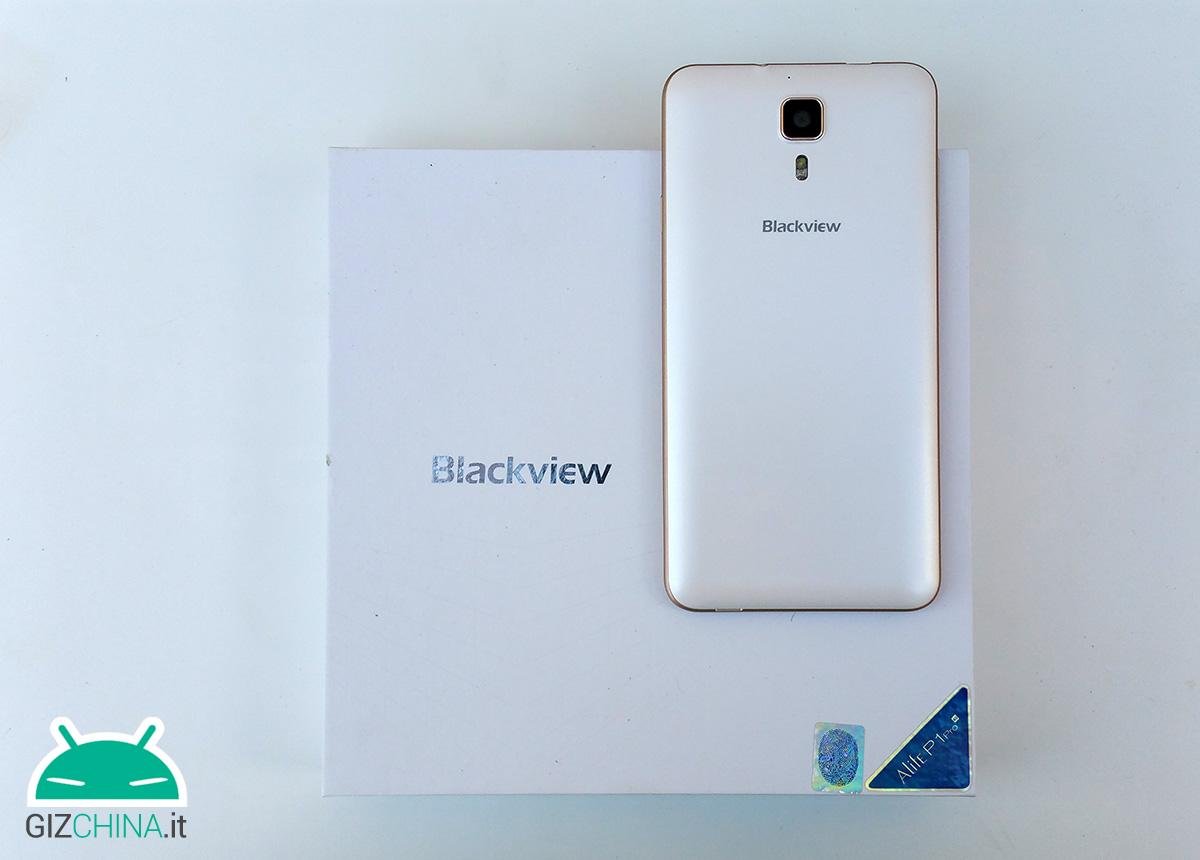 Il Blackview Alife P1 Pro it is available for purchase on Tinydeal.com with the possibility of receiving a discount using the coupon 125BWP1 (valid until 31 August). 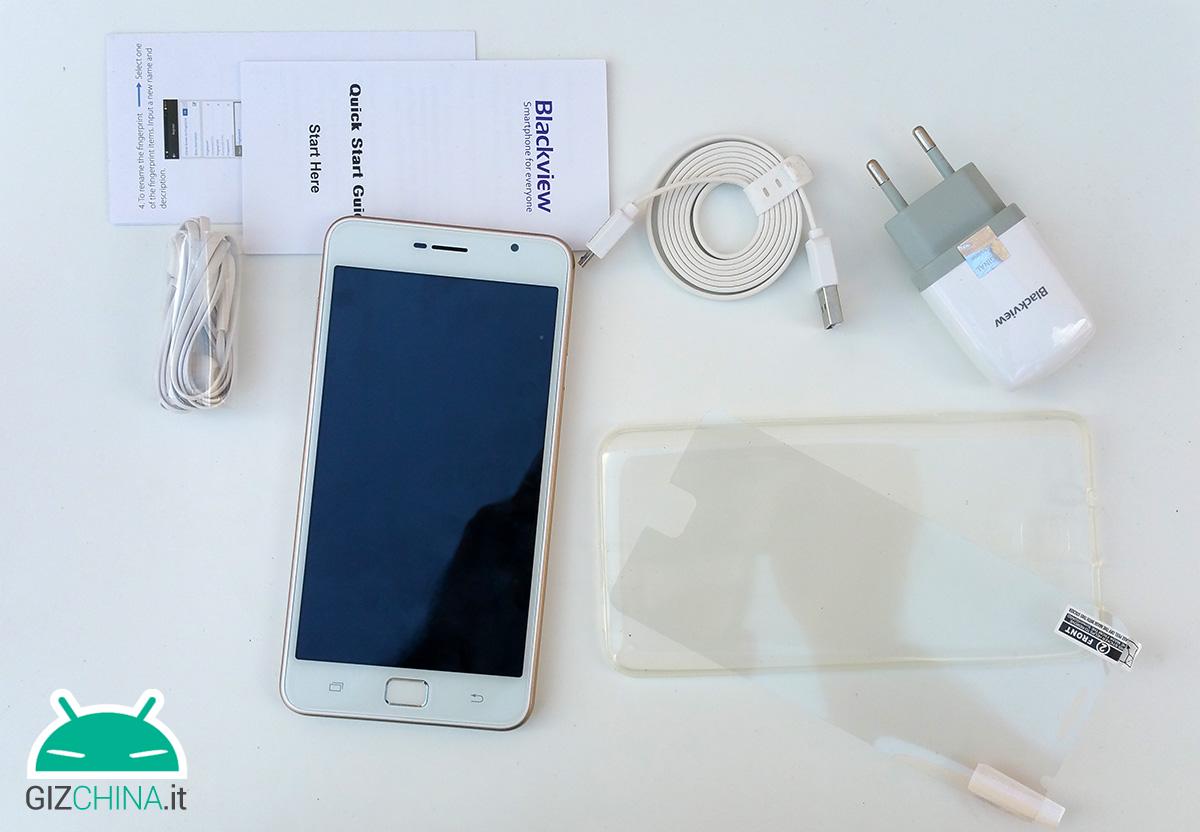 Although the sales package of the Blackview Alife P1 Pro is not very generous in size, inside the content is still very respectable, especially taking into account the price range within which this device is placed. On the front of the box we find only the name of the model, while on the back we summarize all the technical specifications and main functions of the product in question.

The contents of the sales package, on the other hand, are presented in this way: 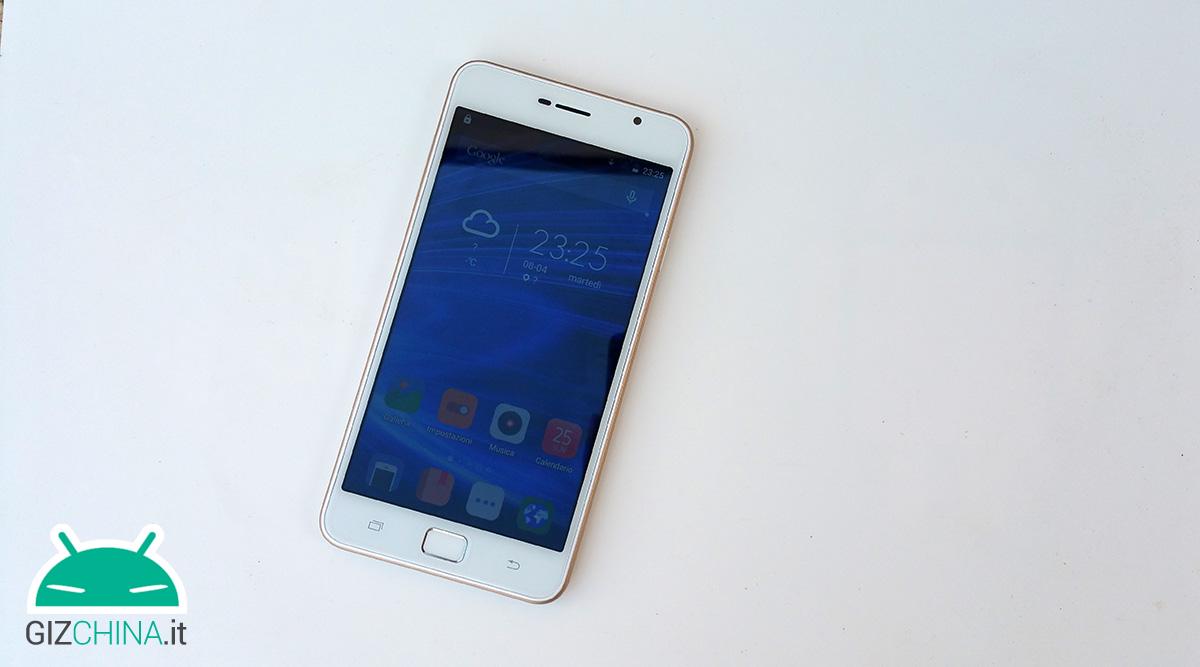 Made of plastic with aluminum frames, the Blackview Alife P1 Pro is certainly not a "monster" in terms of design, although still "passable". The construction materials are in fact robust and the smartphone seems to be made very well, so much so that it does not have various creaks or assembly defects.

The size is more like a smartphone from phablet, although in the 2015 this concept necessarily requires a redefinition, especially when talking about devices from 5.5 inches.

Returning to the size of the device, the Blackview Alife P1 Pro measures 155 x 74 x 8 mm for a weight, including battery, of 170 grams.

Despite the weight and dimensions not exactly contained, the device is very comfortable to hold and use, while the grip is only sufficient (the smartphone is a bit slippery), but on the other hand the positioning of the biometric sensor for unlocking is good. , located on the home button and, therefore, easily accessible in the handle.

Below, however, you will find the dispositions of the individual physical buttons on board the Blackview Alife P1 Pro.

At the bottom we find only the 6 speaker holes supplied with the smartphone and the main microphone. 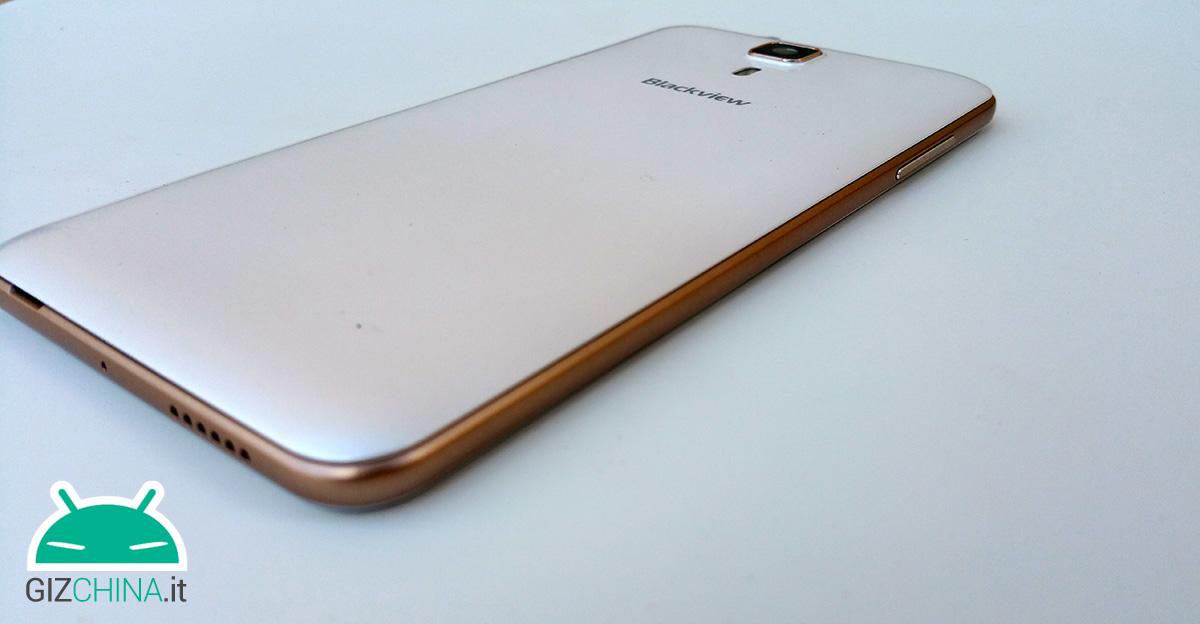 On the left side we find the volume bar while on the right side only the on / off and stand-by button, placed at half height and very easily reachable during use. 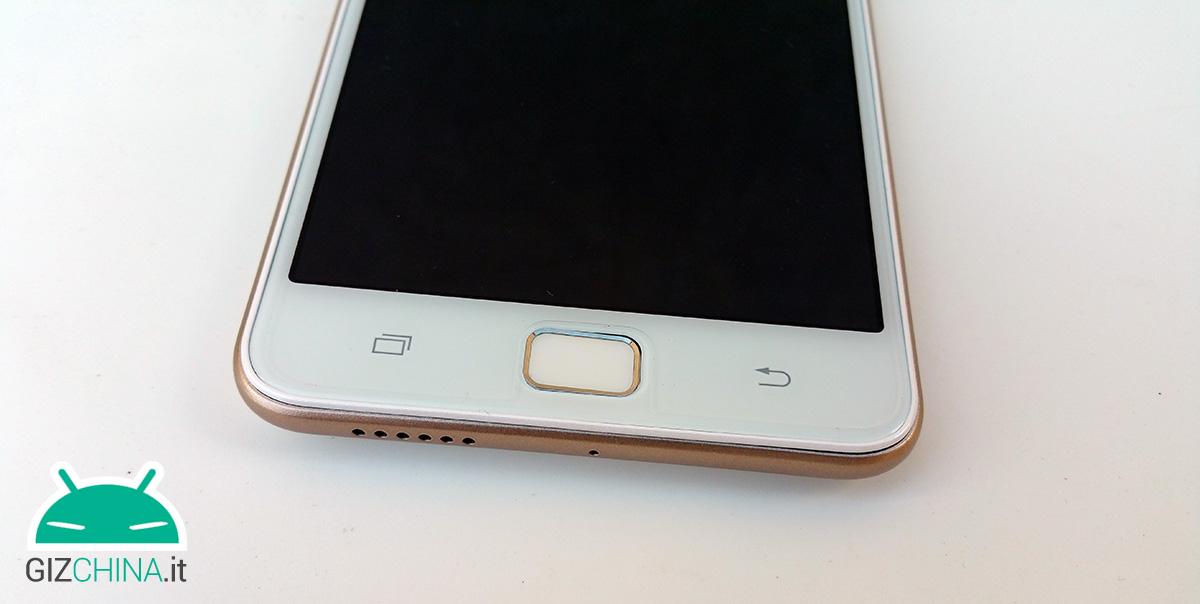 On the front of the device, however, we have three buttons, of which only one is physical; starting from the right we find the options button, next to the Home button that doubles as a biometric sensor to unlock the device (also quite precise) and then the classic back button. The two touch-sensitive buttons, unfortunately, are not backlit. 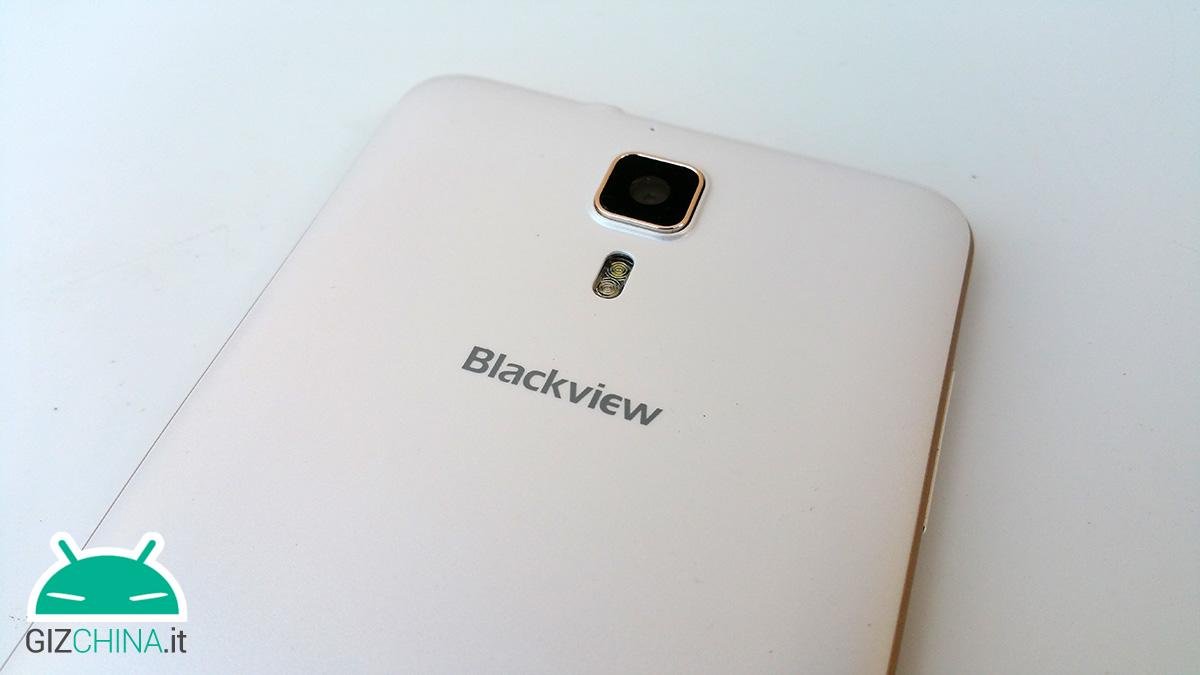 In the back of the body, which is removable just like the battery, we find a well-13 mega-pixel camera (able, however, to capture video only in HD) with a dual LED flash.

On the top of the smartphone, however, we find the Micro USB connector for charging the battery and the 3.5mm plug to connect the headphones. 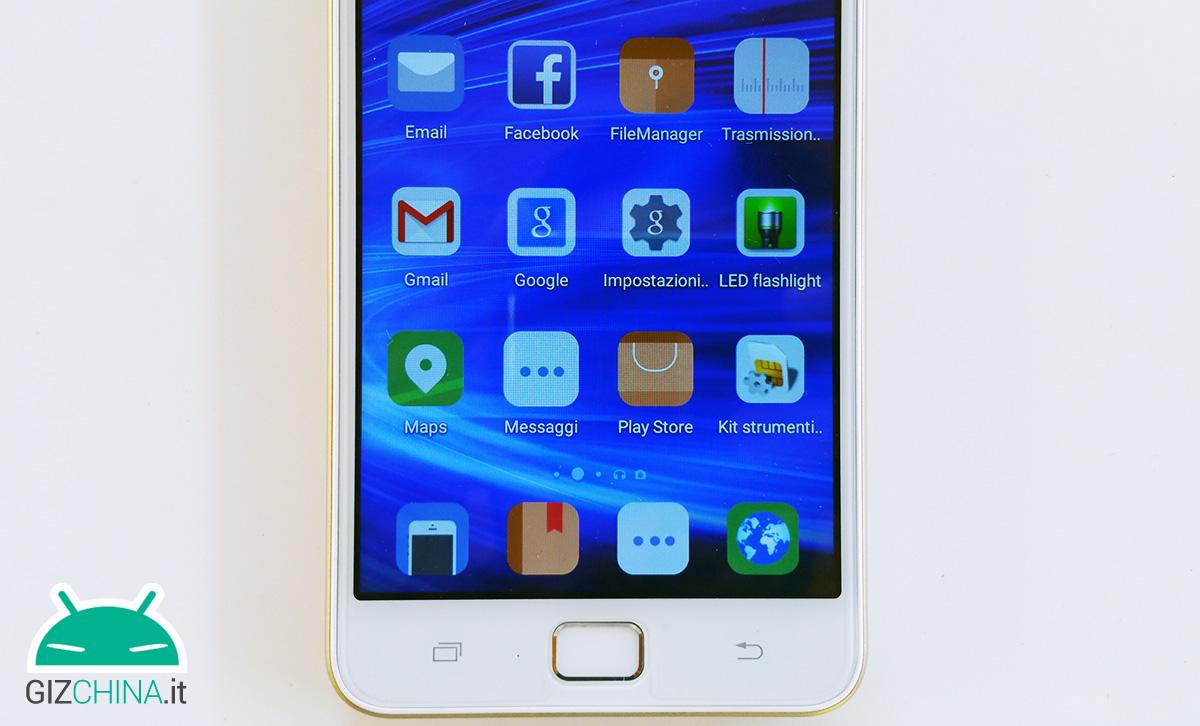 The 5.5 inch panel with HD resolution 1280 x 720 pixels installed on the Blackview Alife P1 Pro is only sufficient; the maximum brightness is good depending on the situation, the colors are well calibrated, but the panel unfortunately reflects a lot under the light of the sun and, therefore, in such conditions it could be very difficult to use it.

On the other hand, the automatic brightness sensor and the proximity sensor function very well. The viewing angle is sufficient, although sometimes the colors tend to alter.

Also on this Blackview Alife P1 Pro we find the MiraVision option which, now well known, allows the adjustment of some parameters relating to the colors of the display in order to improve its quality.

The Blackview Alife P1 Pro is equipped with 16GB of internal memory which, according to what is reported by the graph inside the system, is entirely available to the user and, therefore, not partitioned.

Moreover, according to the manufacturer, thanks to the presence of a micro SD slot, it will be possible to expand the internal memory with a Micro SD up to 128GB.

The Blackview Alife P1 Pro is exactly in the mid-range sector, with hardware and a price that agrees with this positioning. Under the body, in fact, we have a new generation 64-bit Mediatek processor, or the MT6735 Quad-Core, flanked by 2 GB of RAM, in addition to the 16GB of internal storage mentioned above.

This configuration allows the system, based on Android 5.1 Lollipop, to run very smoothly in the execution of each type of application; from the point of view of the photographic section, we find instead a 13 mega-pixel back camera with double LED flash and a 5 front.

The tests performed on the test days reported results on average; As for the browser, however, the Alife P1 Pro has shown good performance, although sometimes the heavier sites put the device's stock browser slightly on their knees; in gaming, however, with Asphalt 8 you get a sufficient result, with a stable framerate, albeit not very high.

Here are the results of the benchmark tests carried out with the Blackview Alife P1 Pro:

Mono speaker supplied with the Blackview Alife P1 Pro, located at the bottom, next to the main microphone. The volume of the audio output is good, you will certainly not lose notifications (unless you are deaf!). The only thing that needs to be done is related to the quality of the sound reproduced: n high volume does not necessarily correspond to a high quality audio and it is precisely what happens with the Alife P1 Pro.

Although it is almost imperceptible, sometimes the speaker tends to croak with some types of music, especially those with a predominance of lower frequencies.

Attention attention! From the point of view of connectivity the Blackview Alife P1 Pro certainly will amaze you; in fact, it is primarily compatible with 4G networks, but what probably will amaze you most is the fact that among the compatible bands there is also the fateful 800 mHZ, almost never present in the datasheets of the cinafonini.

In general, from the point of view of connectivity, with the Blackview Alife P1 Pro there are no problems, with a good reception and very hot switches. Also good Wi-Fi reception, even if in download often tends to show slowdowns. The GPS Fix is ​​fast and the position is accurate and precise.

Nothing exciting, however, the cameras supplied to the smartphone; both the rear from 13 mega-pixel with double LED flash and the front 5 mega-pixel, we were not surprised. In fact, even in good light conditions, they take photos barely enough and you can see it from the shots we have made for you.

Even in macros the result is not exalted; the photographs taken with the front camera, on the other hand, despite the beauty effect being disabled, are constantly battered and poco defined. Video recordings possible at the maximum resolution of 1280 x 720 pixels, also in this case with sufficient general quality and normal audio.

In the following link, instead, you find on Google+ the entire gallery of the photos we have taken for you with the Blackview Alife P1 Pro.

The battery supplied with the Blackview Alife P1 Pro is good 3000 mAh. Usually with a similar amperage you can overcome the day of use and in fact this device in daily use has not disappointed us. In a day of intense use, started at 8: 00 and ended at 23: 00 about, the device has guaranteed 4 hours of screen on.
The test was performed with two active SIM cards, one in 4G and the other in Edge.

Blackview Alife P1 Pro from the software point of view is a device all in all well managed and in any case updated: on board, in fact, we find Android Lollipop 5.1, or the last distribution currently available.

As for the system interface we can say that Blackview has done a job of non-optimal customization: the launcher, in fact, is buggy, as for each application we are going to install a double icon on the homescreen.
Obviously the problem is easily circumvented and resolvable with the installation of a third-party launcher, alternative to the original one, but the bug still remains. In general, however, the software is very fluid and reactive. To mention the presence of the HotKnot (Mediatek alternative to NFC), 3 finger screenshot and the now classic Gesture.

The Blackview Alife P1 Pro is a very interesting smartphone, which fits into the segment of the mid-range, and that, in this price range, absolutely no problem.
Daily use has highlighted few "obscure" aspects of this device and, especially given the sale price, this should not be underestimated. However, the camera has left us a little 'perplexed, because the shots are definitely not up, as well as videos that are only sufficient.

Another aspect poco convincing is that of the software, with particular reference to the default launcher; the split icons are definitely annoying, but in any case the problem can be circumvented, as already mentioned, with an alternative launcher.

In any case, the device is promising, the performances are good and even the assembly and the materials have convinced us.

Il Blackview Alife P1 Pro is available for purchase on Tinydeal.com with the possibility of receiving a discount using the coupon 125BWP1 (valid until 31 August).