During the last week we have seen many presentations and official launches of the new top of the range of some companies. Among these we certainly cannot fail to mention Meizu, which officially launched the Meizu MX5.

Today we offer our highly anticipated exclusive review of the terminal (probably world exclusive) - in an international version - which was sent to us by Topresellerstore.it (in collaboration with the official dealer for Italy Meizu.it) store where you will find the device in pre-order and as always with shipping fromItaly e 24 months of warranty and Italian assistance. We remind you that on the store you can take advantage of a discount through the voucher GIZCHINA. 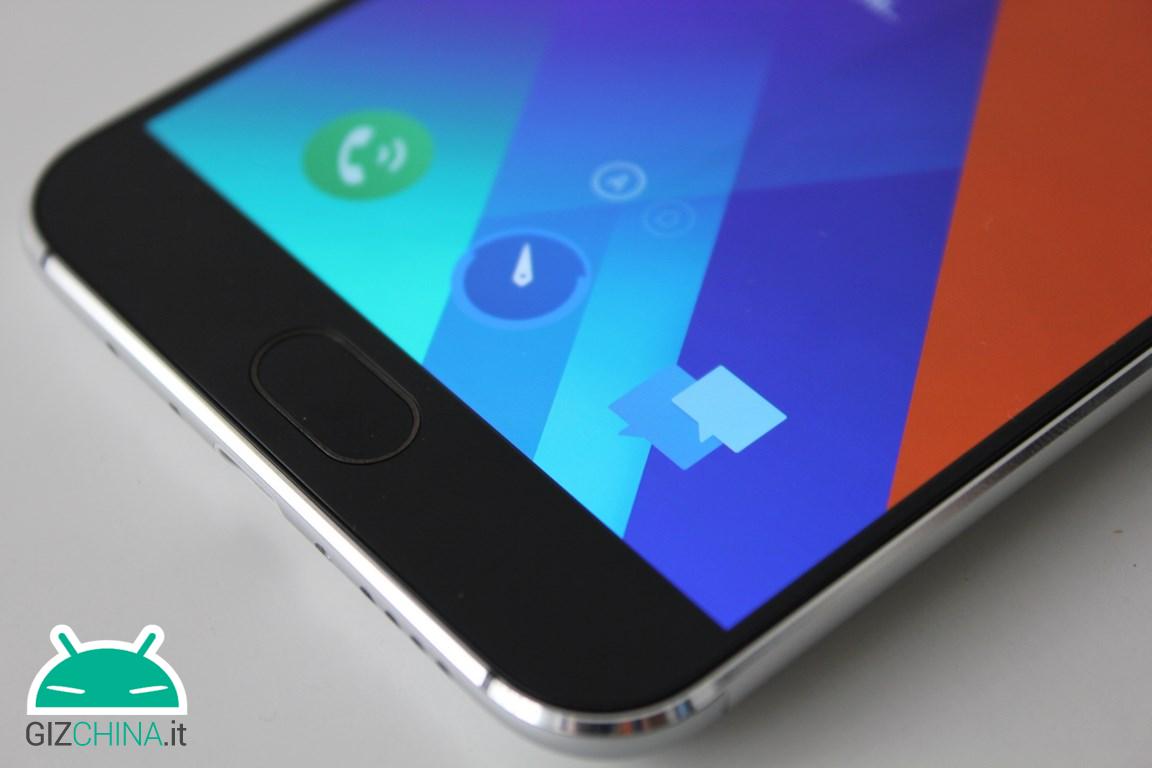 Are you curious? Then read on or watch the video above!

Before continuing, take a look at complete technical data sheet of the Meizu MX5. 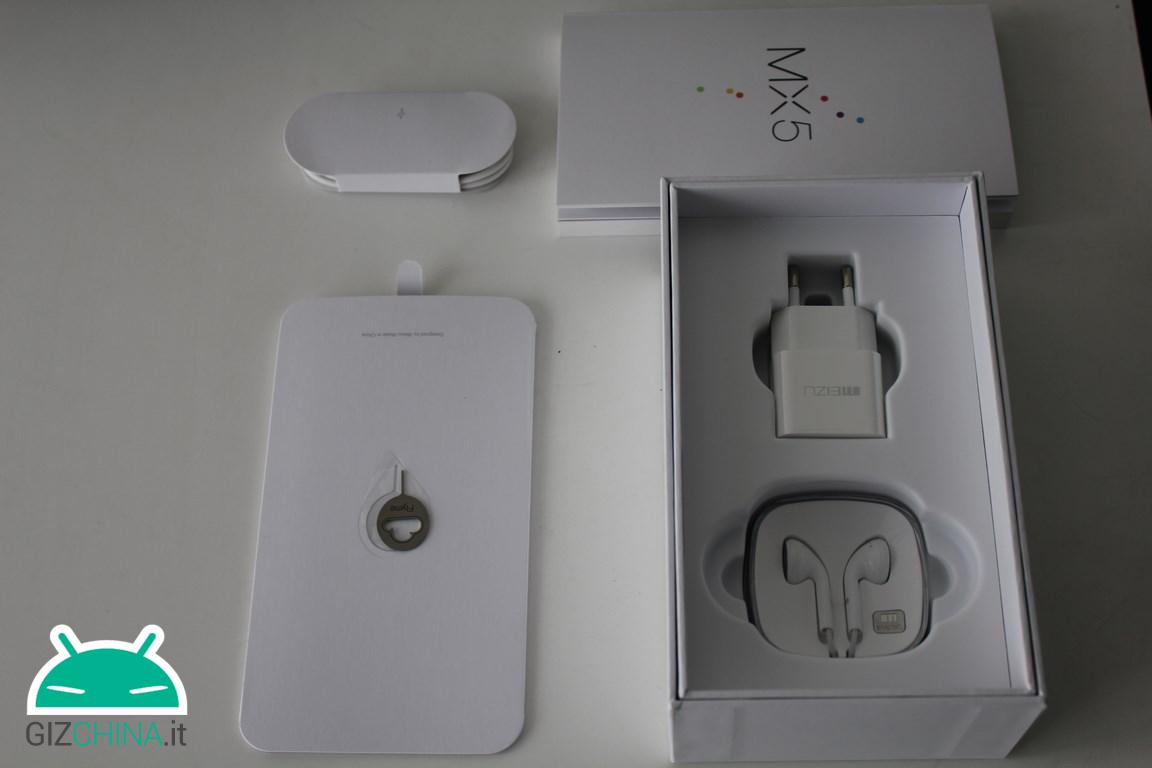 La international version that we propose in this review will be characterized by a sales package and with an accessory equipment different from the Chinese one.

Inside the box, different in size from what we are used to seeing with Meizu, we find:

An accessories therefore very complete, with the Plus of the headphones EP-21HD included, not included in the Chinese version of the device.

The design of the device recalls the aesthetic lines used on the Meizu MX4 on the front, with the difference of the physical button instead of the circular soft touch. 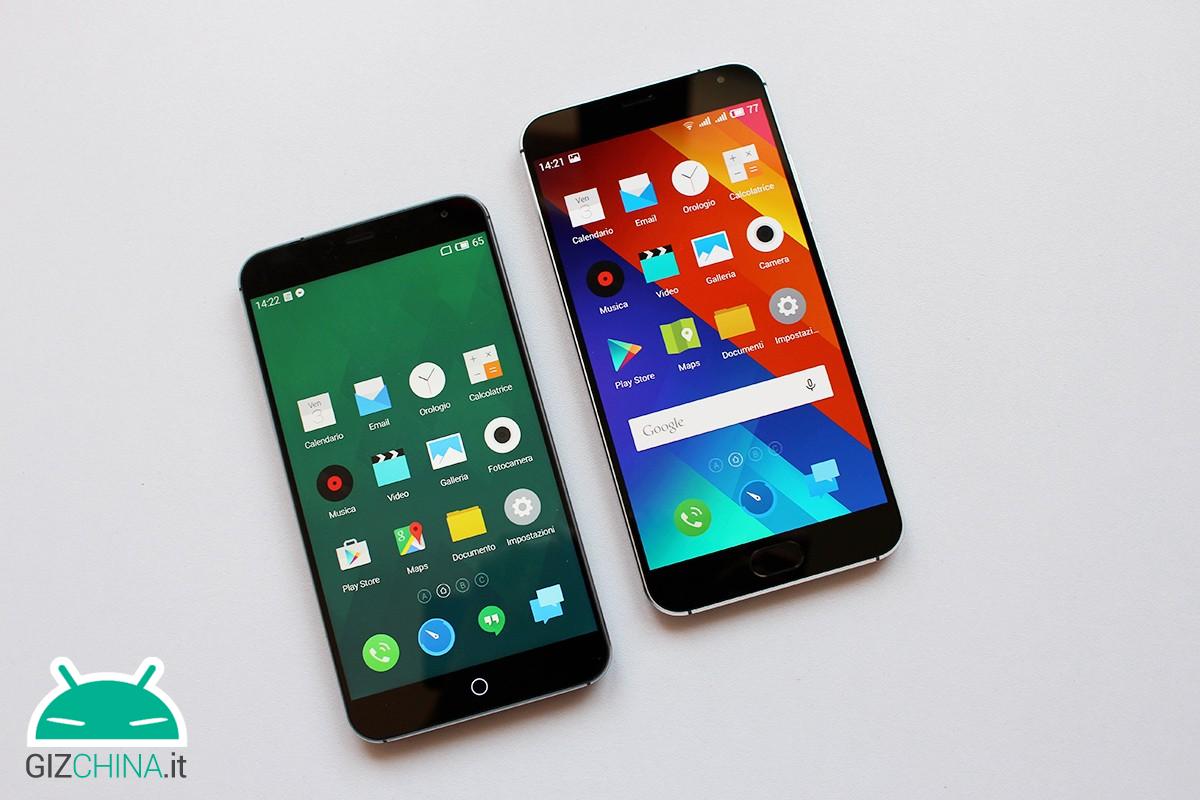 The most significant changes were used on the rear profile of the terminal made entirely of metal. 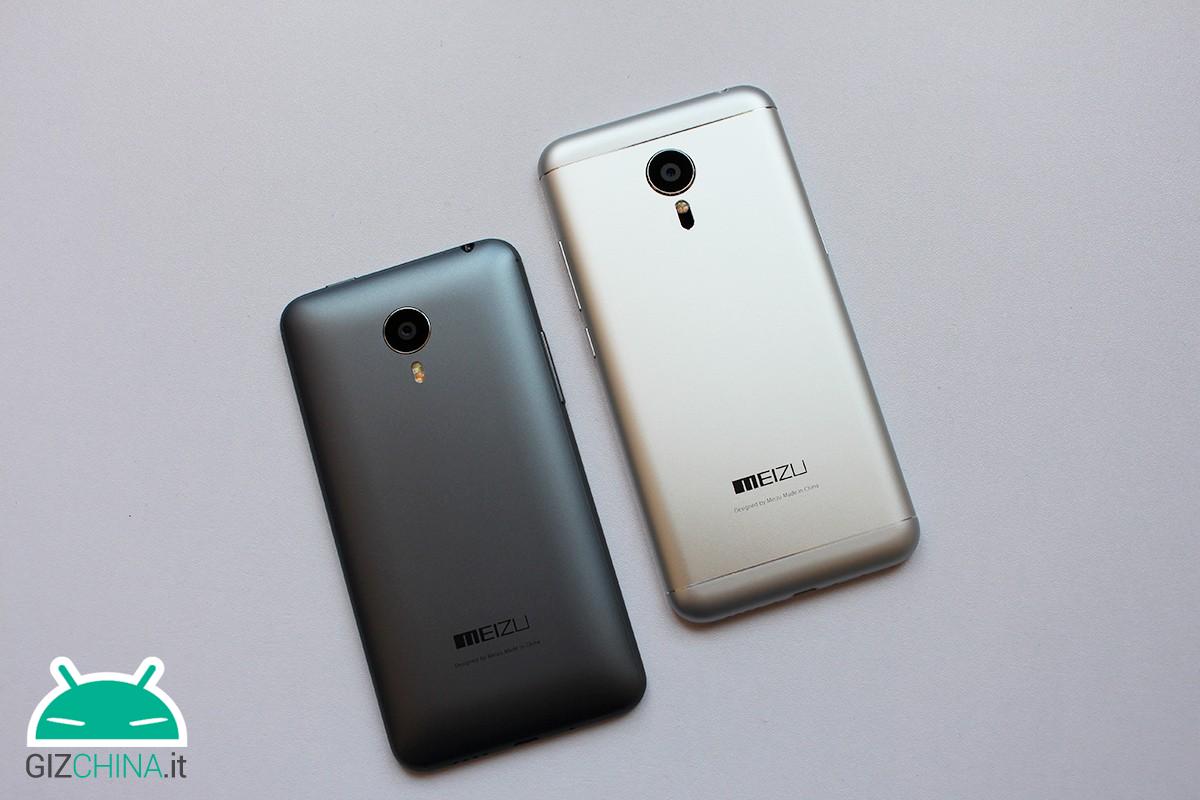 A terminal, therefore, rather light that despite the diagonal of the display from 5.5 inches it is easy to use even with just one hand, with a good grip during the setting phase. 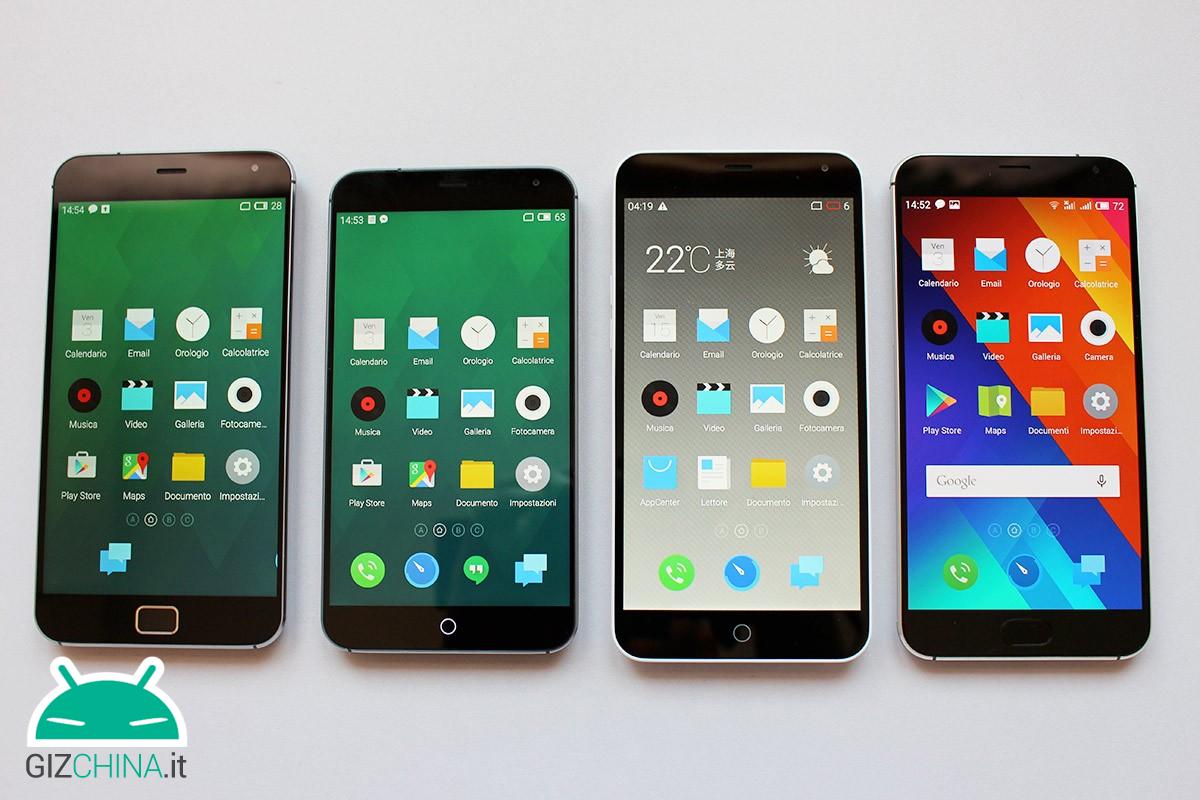 Let's see the arrangement of keys and inputs: 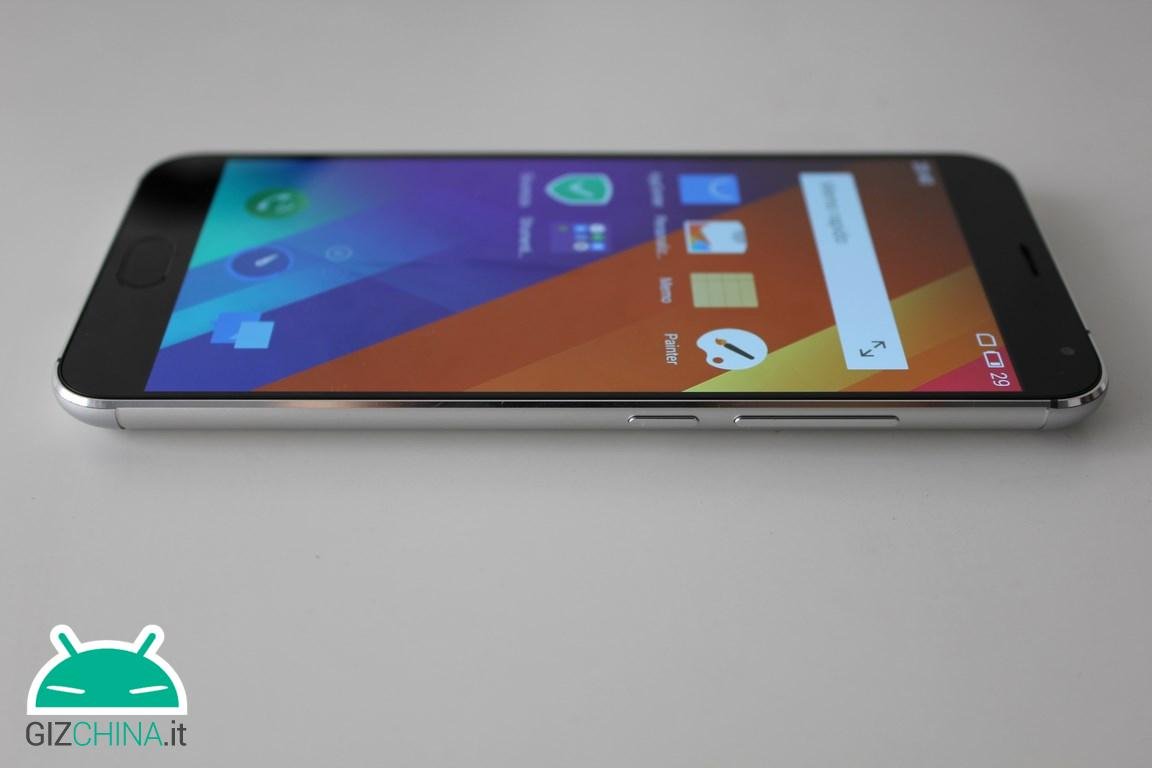 On the right profile we find the on / off button, as well as the volume rocker, both made of metal. 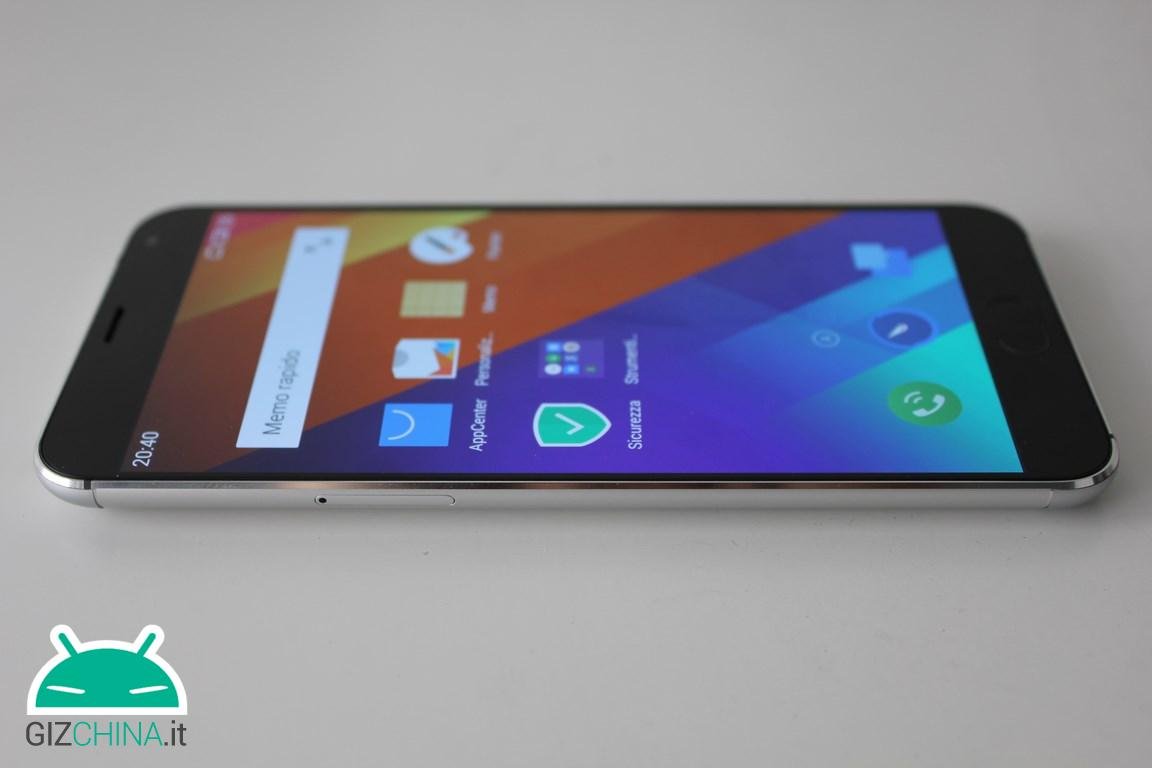 On the left profile we find the double SIM slot (in Nano format) with LTE connectivity on both. 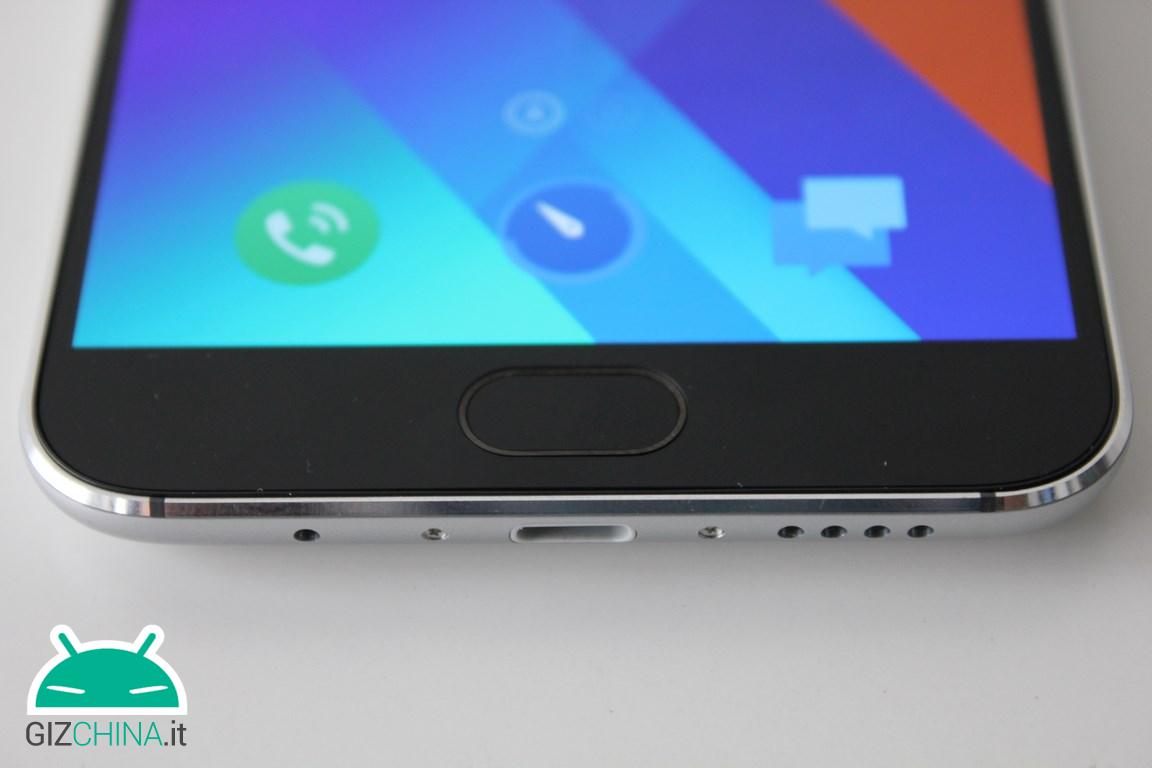 The main microphone, the micro USB 2.0 port (OTG / MTP) and the single system speaker are positioned on the lower profile. 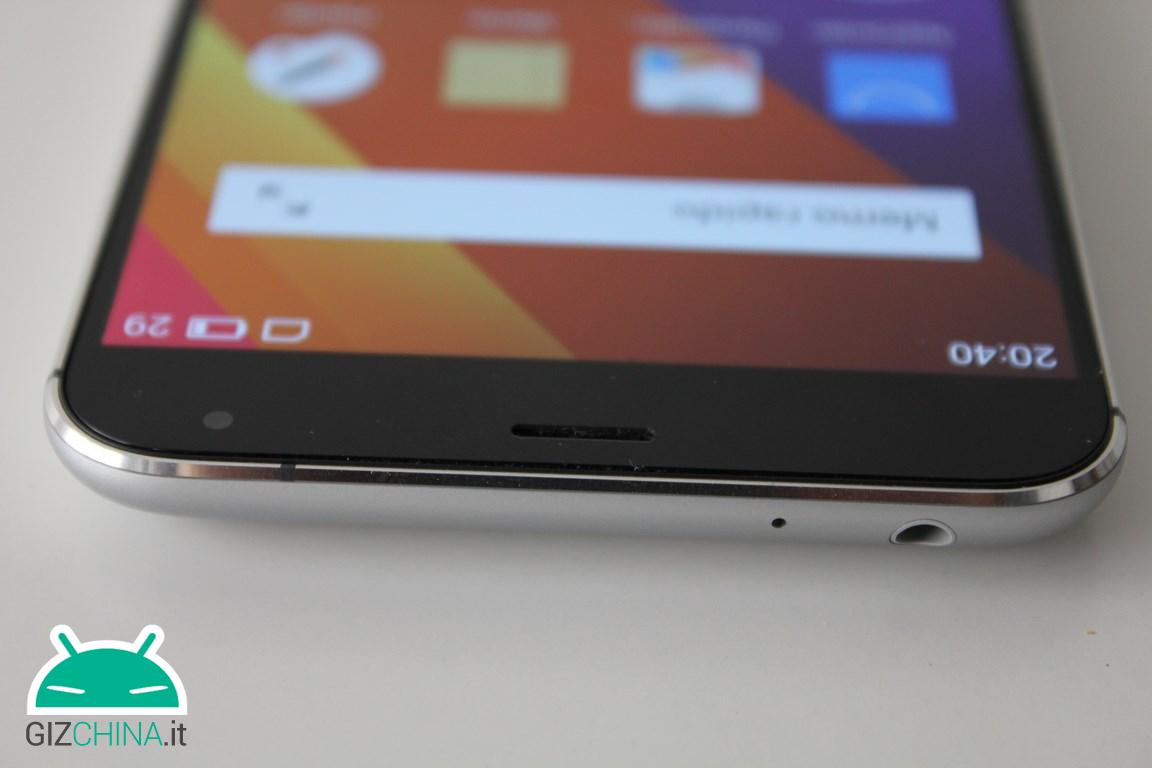 At the top, however, we find the 3.5 mm jack for headphones and a second microphone for reducing environmental noise.

Frontally we find the ear capsule, the brightness and proximity sensors and the front camera from 5 mega-pixels with opening f / 2.0 and named beauty mode FotoNation 2.0.

At the bottom, finally, we find the physical key mBack with a built-in fingerprint reader really very fast in recognition and release, called mTouch. 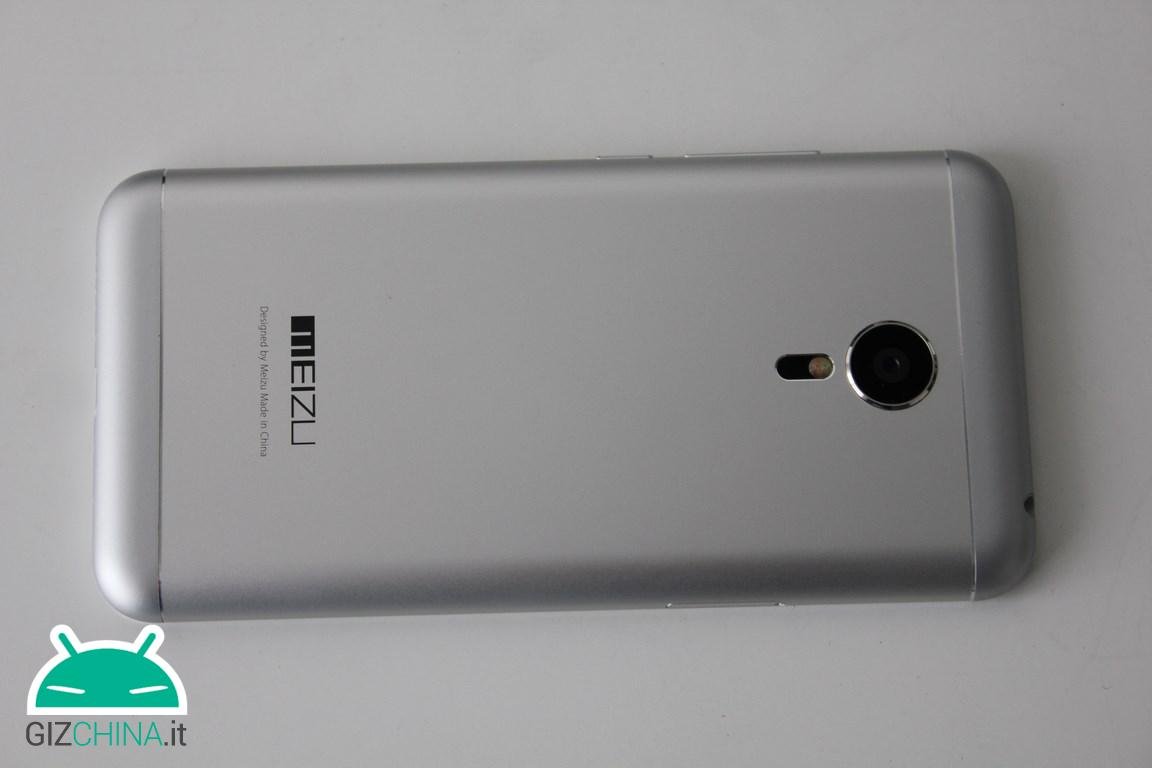 The back, as already mentioned, is made entirely of metal with a processing of about 30 days. The central part is smooth and the upper and lower ones worked in order to give a slightly rougher effect, as well as a little more raised than the rest of the body. 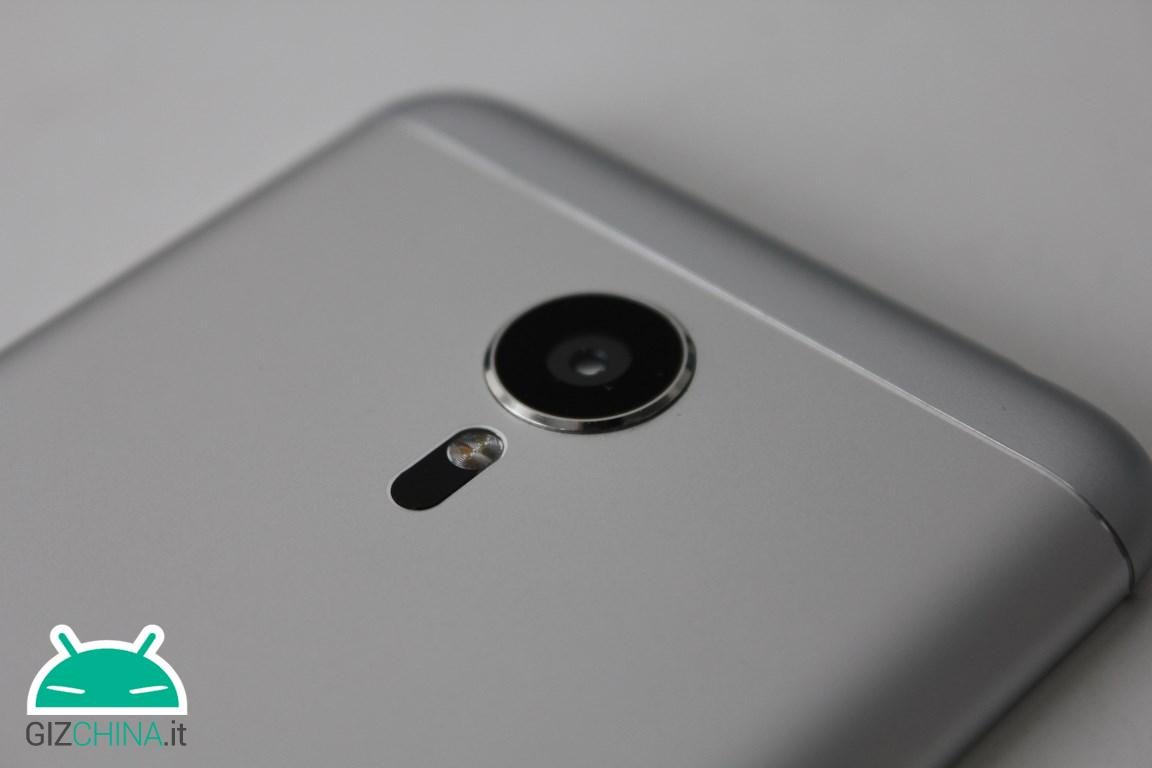 We find the rear camera from above 20.7 mega-pixels with Dual Dual LED Flash el '"laser" autofocus. 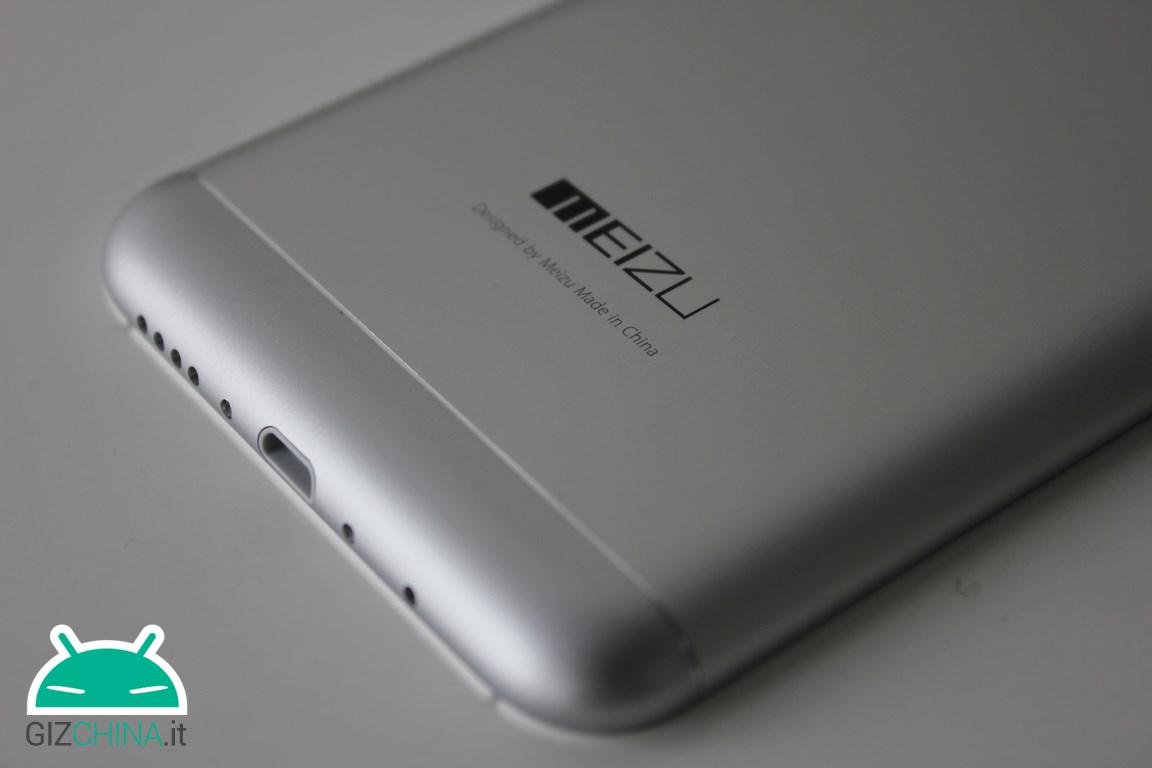 Below, finally, we find the Meizu logo. 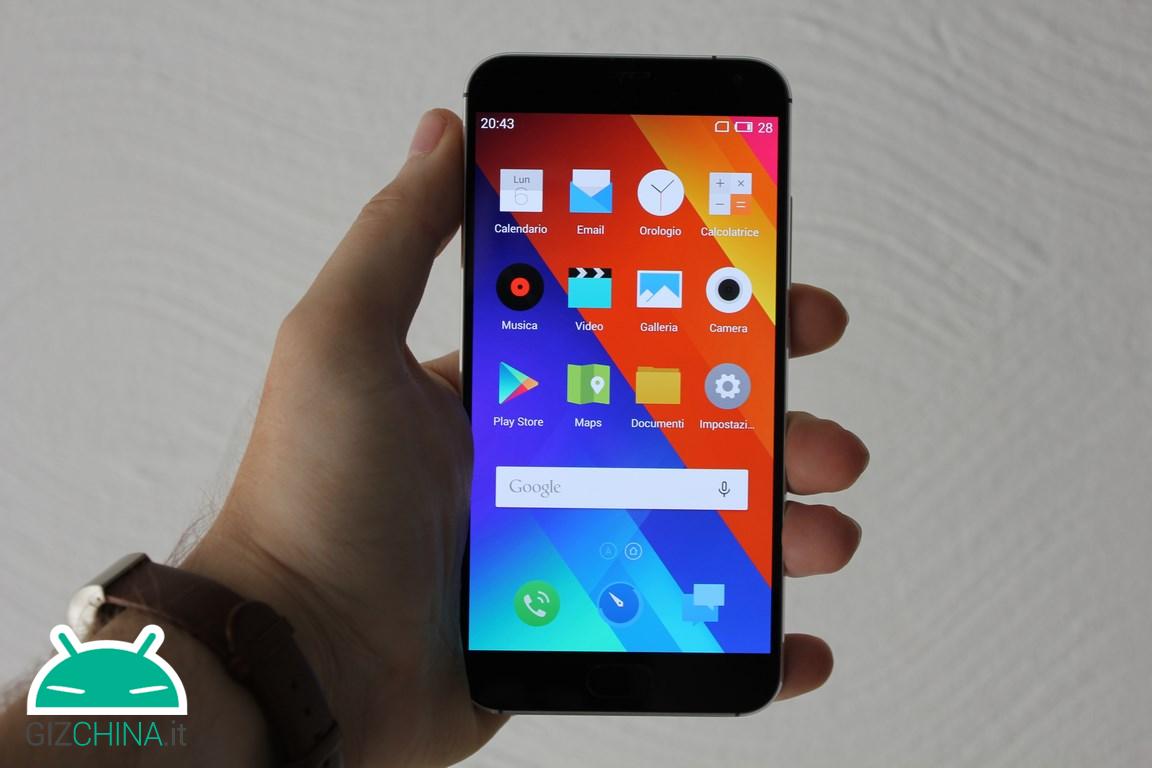 In our tests, the display of the Meizu MX5 turned out to be an excellent panel with a good reproduction of the entire color range, but with the classic calibration more saturated of the contents typical of AMOLED displays.

Good visual angles even if they show an evident color change in the transition between vertical and horizontal display. Nothing that could affect the visual experience of the contents.

We point out that the display is equipped with an excellent oleaophobic treatment that significantly reduces the retention of fingerprints during use.

Lastly, the touchscreen is very responsive, allowing instant recognition of touches both during typing and navigation within applications and the interface.

The device is equipped with 16 GB non-expandable internal memory divided into a single partition of about 8 GB available at the first start. OTG support is present.

The terminal is characterized by a compact hardware of the latest generation consisting of a processor octa-core Mediatek Helio X10 (MT6795T) to 2.2 GHz, therefore the variant Turbo of the high-end chipset made by Mediatek with higher clock, accompanied by 3 GB of RAM and a GPU PowerVR G6200 MP4.

The performance offered by this combination of hardware is excellent. All operations are performed very smoothly thanks to the operating system, Flyme OS, really well optimized.

During some benchmark tests such as PC Mark the terminal reached peaks of 45 ° in temperature with an overheating of the body. A value that is not very low, but which, however, thanks to the presence of aluminum tends to decrease very quickly due to the excellent dissipation offered by the materials.

It is in particular on very hot days and with the terminal in direct contact with sunlight (for example at the beach or in the pool) that the temperature of the device appears higher than average.

Testing the terminal with Real Racing 3 there is an excellent fluidity, with all the elements of the game reproduced to the maximum of details.

The device is characterized, as anticipated, by a rear camera from 20.7 mega-pixels with opening f / 2.2, Dual Dual LED Flash e infrared autofocus. 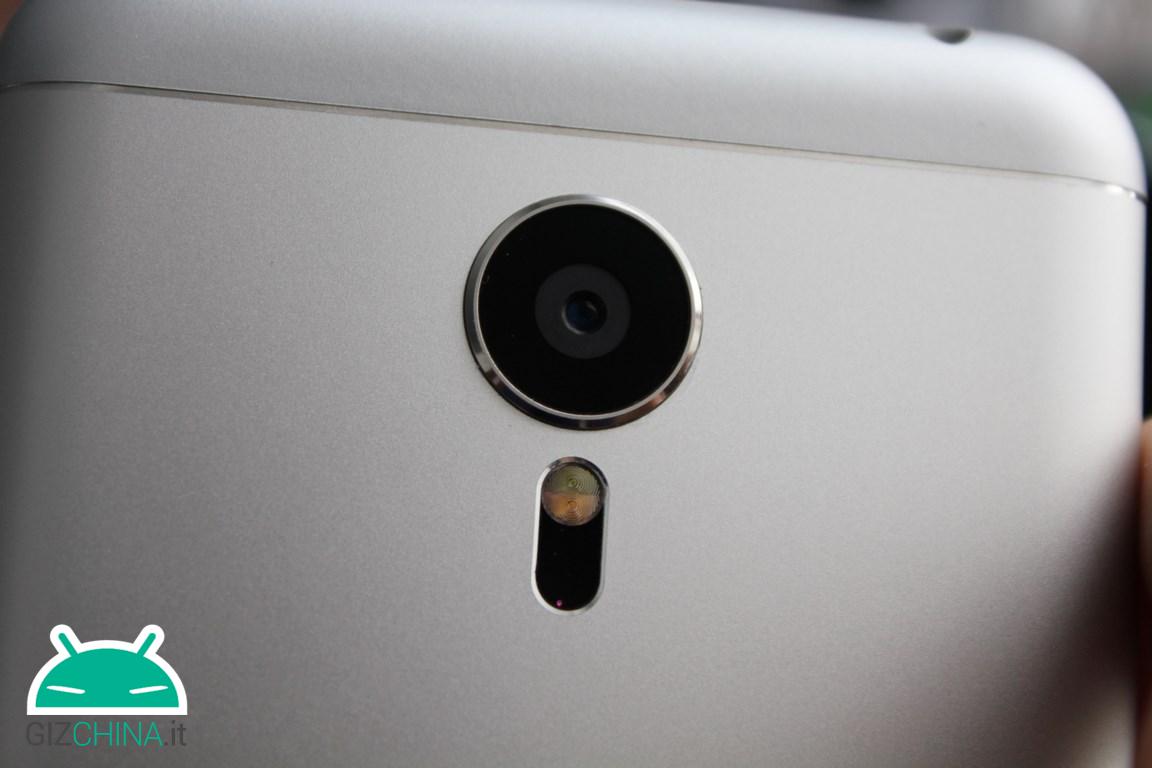 Compared to Lenovo Vibe Shot recently reviewed, the laser autofocus implemented on this terminal turns out to be a little slower in focusing very close objects.

Even the quality of the shots is not a big step forward compared to the Meizu MX4, especially in the "night" shots, in which a level of digital noise is visible slightly higher than the previous model.

Sign, however, that the camera management software needs further optimization, which we hope will come in the next updates.

The quality of the shots is very good in the daytime with a satisfactory color rendering and a high level of detail.

At night we have highlighted the aforementioned rather large digital noise, but it is balanced in the use of dual Dual LED Flash Tone which is very powerful and well calibrated.

Good macros with a high level of detail and also good HDR, which returns shots balanced in colors, going to enhance the shaded areas and those with more light.

Complete gallery of shots made with the Meizu MX5

The videos are made at the maximum 4K resolution with a good, but not excellent, digital image stabilization and a slightly distressed autofocus in very close shots.

The video test could not be uploaded to 4K because YouTube returns an error (unsupported file type).

We will try to reload the file more than once or, alternatively, upload it to a hosting service.

Il Meizu MX5, as already mentioned, is equipped with a double SIM slot format Nano with support for connectivity LTE on both SIMs.. No problem in signal coupling that is very fast even on the move.

It is possible to hot switch the connectivity LTE between one SIMs. and the other through the appropriate menu in the system settings. 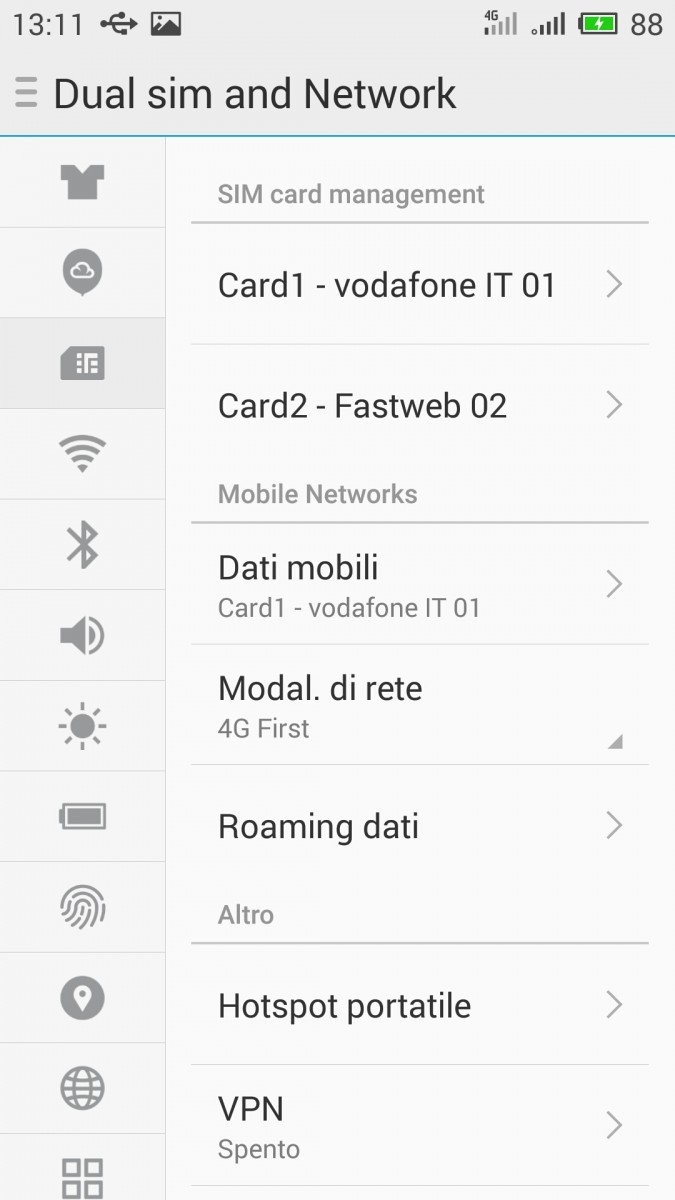 It is not possible to set up for the moment SIMs. default for calls. For each call, therefore, it will be necessary to choose from time to time, using the appropriate icon in the telephone dialer, which card to use.

Excellent call quality, with a strong and defined sound capsule and an audio captured by the equally good microphone. The speakerphone is also good, with no distortions at maximum volume. The only note is the proximity sensor that, from time to time, freezes leaving the black screen even after the conclusion of a call.

No problem with WiFi, Bluetooth and GPS that fixes very fast, guaranteeing stable and precise navigation.

The single system speaker guarantees a rather high and clean audio with a slight distortion of the contents in the higher frequencies and with maximum volume. On the other hand, it is excellent in headphones, much more balanced between low, high and medium.

Good positioning on the lower profile that avoids incurring in muffling or suffocation of sound by placing the device on a flat surface.

The device mounts a battery from 3150 mAh which is performance and well managed at the software level by the operating system, much more balanced in this sense than the previous releases ..

With intensive use (with both SIM active and in balanced mode) they are achieved poco more than 4 hours on screen turned on, a really good result if we consider that the device has just been launched and the ROM will be refined in future system updates.

Using the device in "High Performance" mode or in prolonged gaming sessions, the 3 / 3 hours and a half of screen lit.. 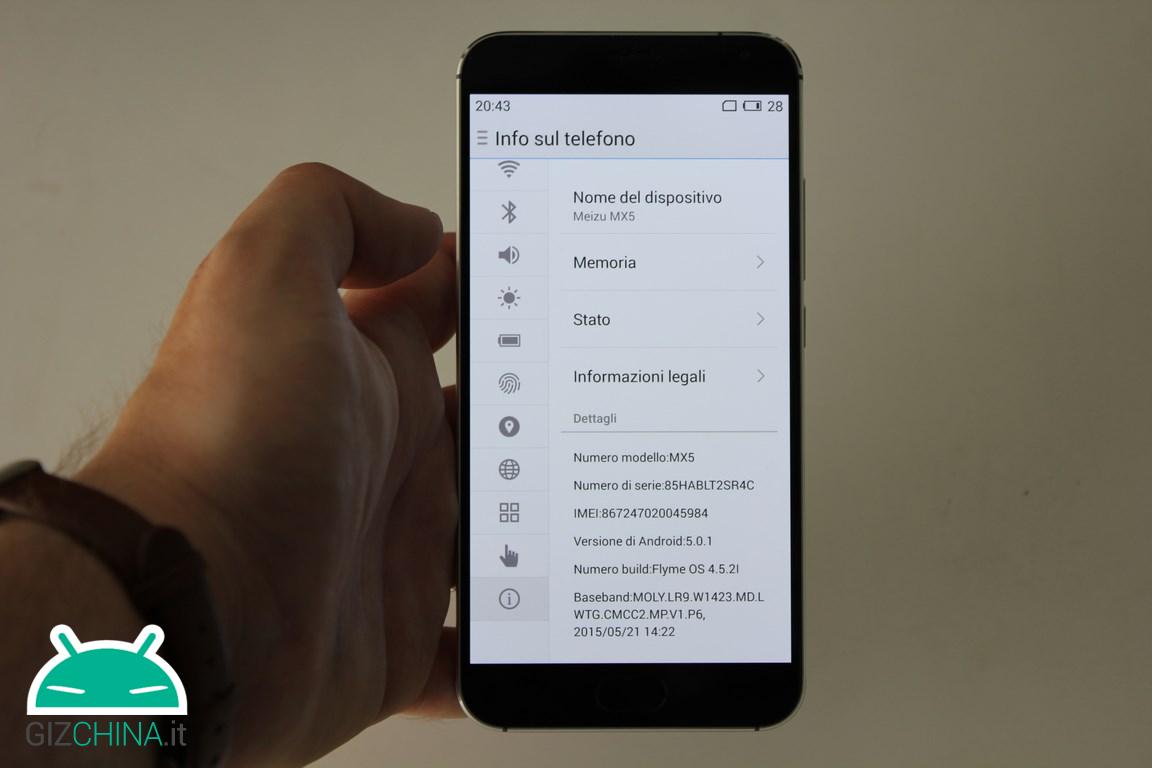 On the Meizu MX5 we find the Flyme OS 4.5.2i (international version) based on Android Lollipop 5.0 which in terms of design does not bring particular implementations, confirming the classic clean and minimal design.

The system really runs smoothly, a sign that the development team has worked really well in optimizing this ROM.

We did not find any problems in the management of autonomy, which, as already mentioned, is really good compared to the Meizu M2 Note, with which we found considerable battery drain.

The system, however, still has some bugs to fix such as the "splitting" of some notifications or the cancellation of the Google account after an "automatic" system restart (this circumstance happened only once during the test period). In addition, the proximity sensor has occasionally highlighted blocks when making voice calls.

With the introduction of a physical home button in place of the much loved circular soft touch, it is as if Meizu had desecrated a representative "symbol" for fans of the brand.

However, as a great admirer of the MX4 and the aforementioned soft touch button, I can still guarantee you that the user experience with themBack associated tomTouch, or the fingerprint reader, is perhaps even more satisfying in terms of simplicity and speed of use of the device.

What has just been written, obviously, does not take into account the more purely aesthetic aspects, which, of a purely subjective nature, must be the subject of your evaluation. However, the shape of the physical key of the MX5 is already much more pleasing (and less invasive from a visual point of view) than that of, for example, the MX4 Pro.

In general, the Meizu MX5 is a device that, a few days after its release, already shows excellent performance and a very successful design, which cannot simply be defined as “a more valuable version of the M2 Note”. The MX5, in fact, is incredibly finished in all its parts and this confirms the goodness of Meizu productions, even in this sense.

Some aspects of a software nature are certainly still to be filed, but in any case the experience of using the terminal is already very, very pleasant.

So the Meizu MX5 comes out absolutely promoted by this review!

In closing, we thank again Topresellerstore.it (in collaboration with the official dealer for Italy Meizu.it) store where you will find in pre-order and as always with shipping fromItaly e 24 months of warranty and Italian assistance. We remind you that on the store you can take advantage of a discount through the voucher GIZCHINA.