The telephony market probably represents today's "locomotive" of technological development, that is a sector in which all manufacturers try to bring together the best of their know how, in order to offer products with particular and, when possible, innovative features.

If the diversification from the hardware point of view is now quite rare, some manufacturers aim to offer a software experience different from those to which we are accustomed. This is the choice made by Meizu, which, in partnership with Canonical, gave birth to the version Ubuntu Edition of his previous Top of Gamma, or the Meizu MX4. 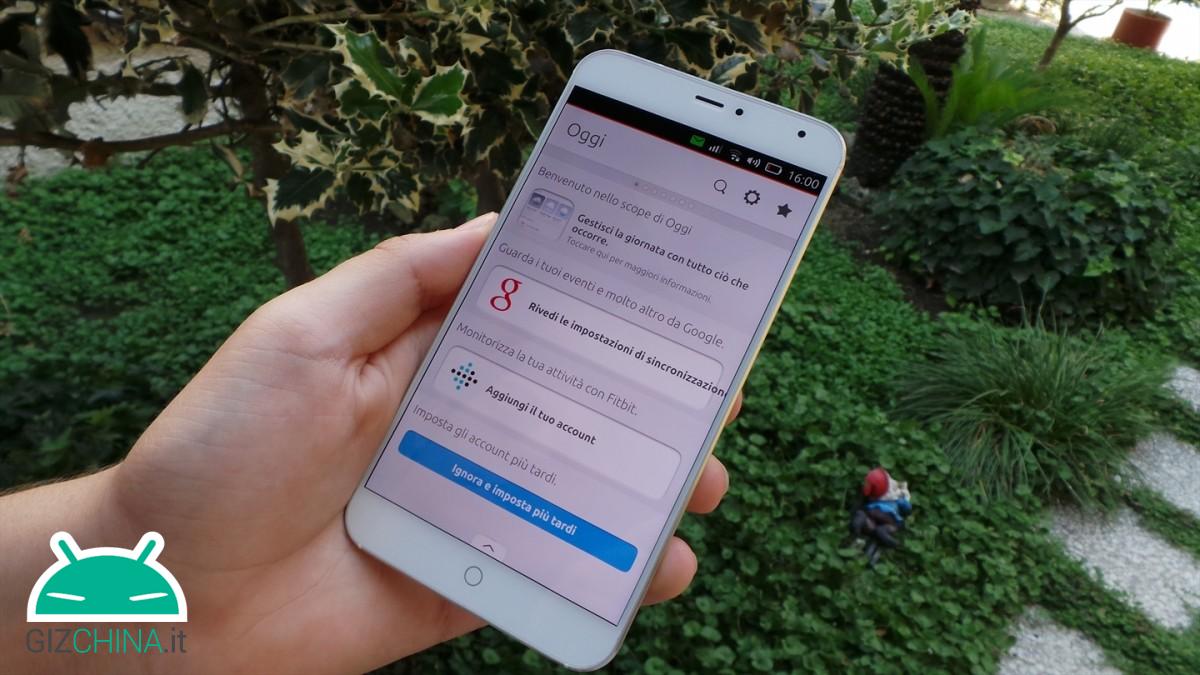 Let's find out if the new OS will find the favor of the users or if, perhaps, it is even better to fall back on the classic operating systems, now tested.

Compared to the standard version of the device, the Meizu MX4 Ubuntu Edition offers nothing new from the hardware point of view. In fact, as anticipated, the only update concerns the software. The complete specifications of the device are listed below.

On the Ubuntu Edition of the MX4 the design and presentation of the sales package does not change either. The difference, compared to the traditional version of the smartphone, is in fact detectable only in the presence of a sticker that reminds us of the Ubuntu OS equipment. Inside the box we find:

Pack a bit '"poor" than those we are used to seeing for oriental smartphones (low-cost ones), but that fully reflects the philosophy of the manufacturer.

The smartphone is placed inside the package in the classic illustrated book box.

Meizu MX4 was one of the most interesting smartphones from an aesthetic point of view and MX4 Ubuntu Edition (re) confirms this feeling, since it fully incorporates the design of last year's Meizu flagship and, more precisely, that of the Silver Edge version. 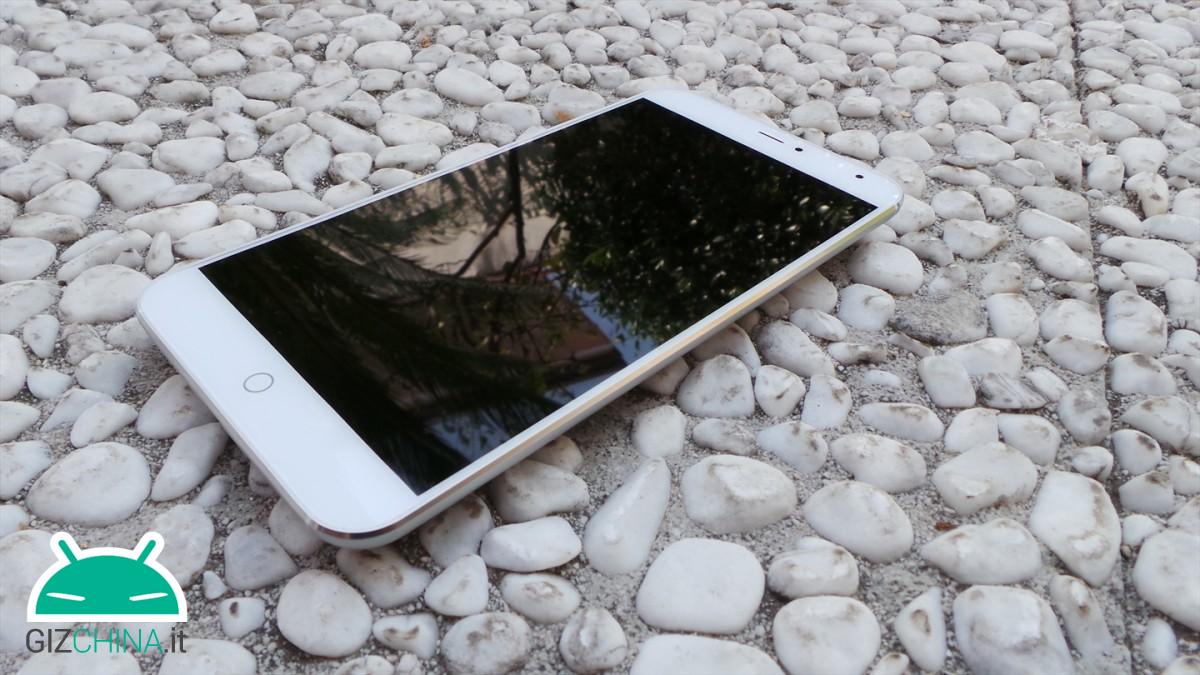 On the front we find the display from 5.5 inch IPS FULL HD + with resolution of 1920 1136 pixels x, which overlooks the now iconic Meizu soft touch button, also taken up in this variant.

Present the front camera from 5 megapixel along with the sensor of brightness, proximity and the capsule earpiece.

The left side houses the volume bar, also in aluminum, like the whole side frame surrounding MX4 Ubuntu Edition.

The right side is completely clean. 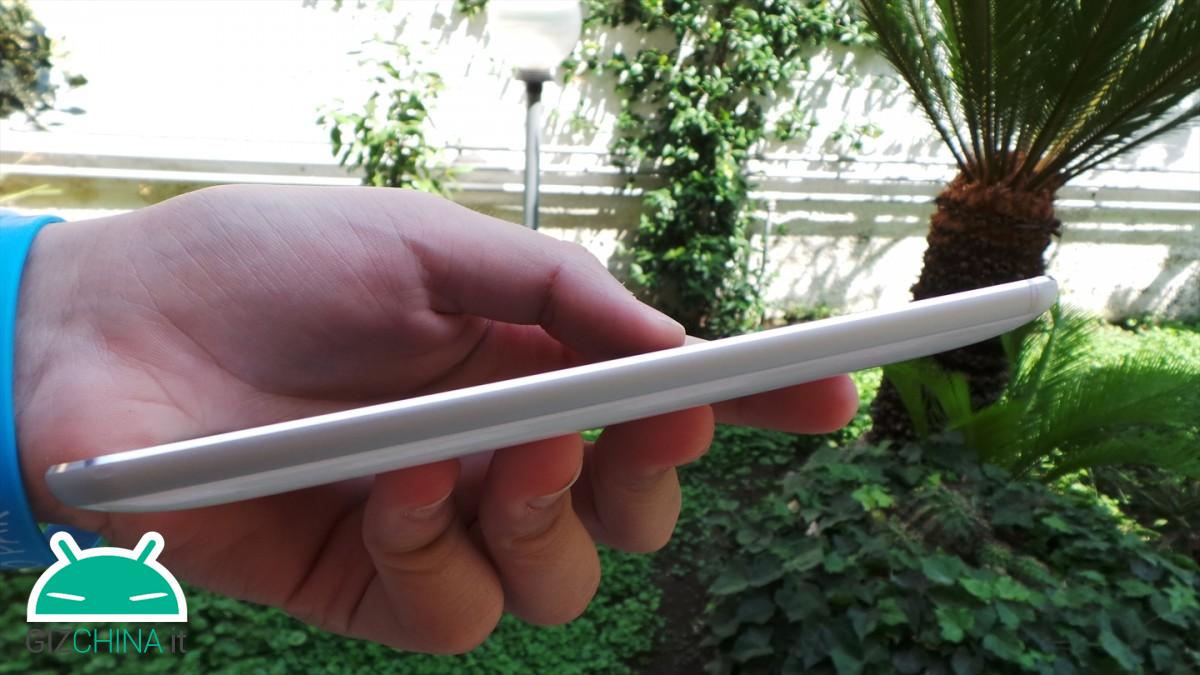 The 3,5 mm jack plug, the second microphone for environmental noise reduction and the on / off button, with a slightly harder stroke, is housed in the upper housing. 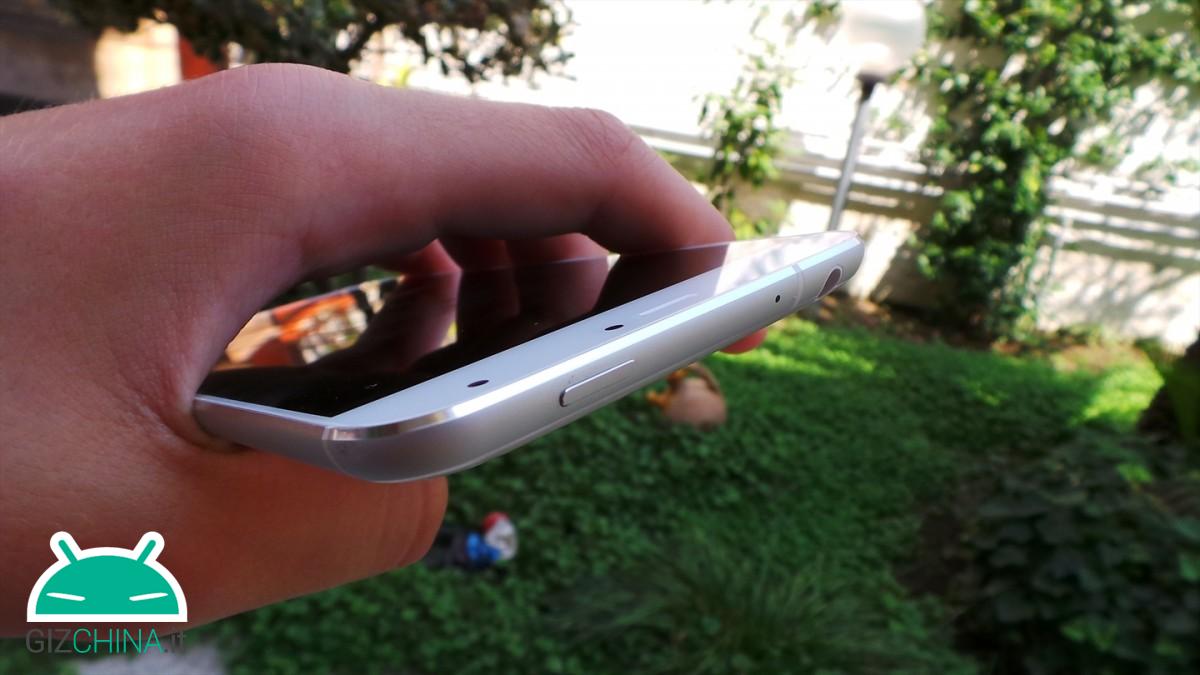 At the bottom we find the plug for the micro USB port in the middle and on the sides the main microphone and the system speaker. 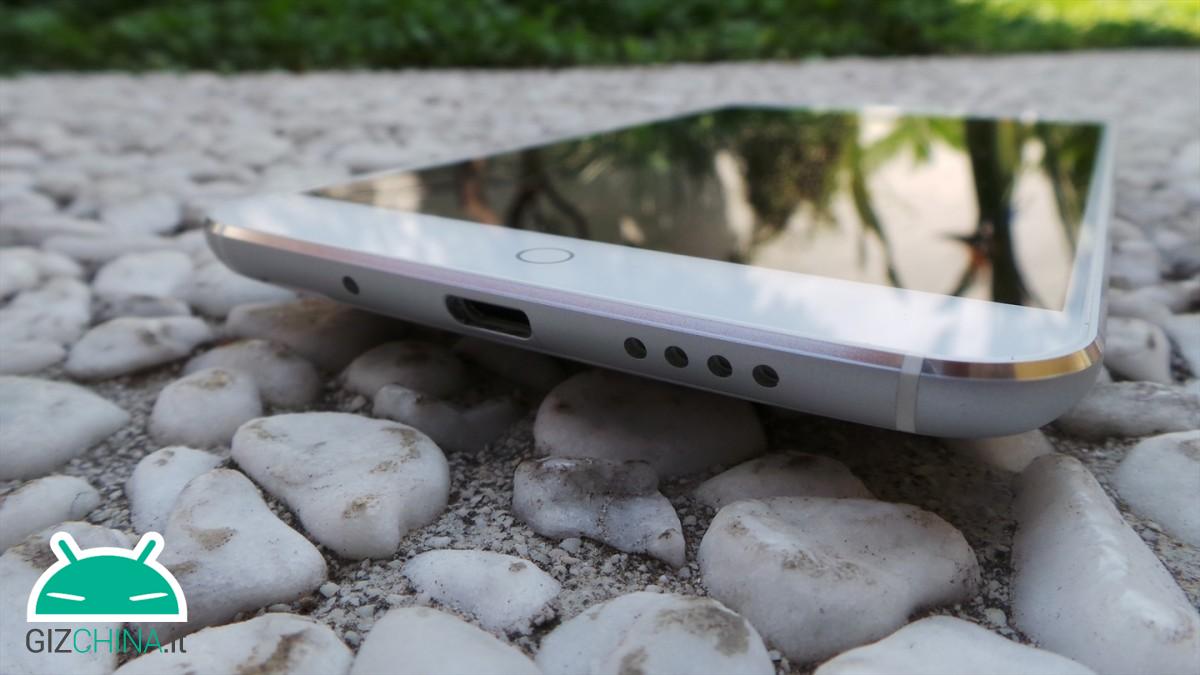 On the back there is the main camera from 20.7 mega-pixels, slightly protruding from the body of the device due to the silver frame that surrounds it. On the same axis of the camera we find the dual Tone LED flash and the manufacturer's logo. At the bottom there is also a recess to remove the back cover.

The shell materials are “hybrid”. The frame of the device is entirely in aluminum, with a side part processing similar to the Diamond Cut, which gives an always elegant appearance. The back-cover is made of polycarbonate, with a slightly glossy finish and a very pleasant texture, visible only in strong light conditions. 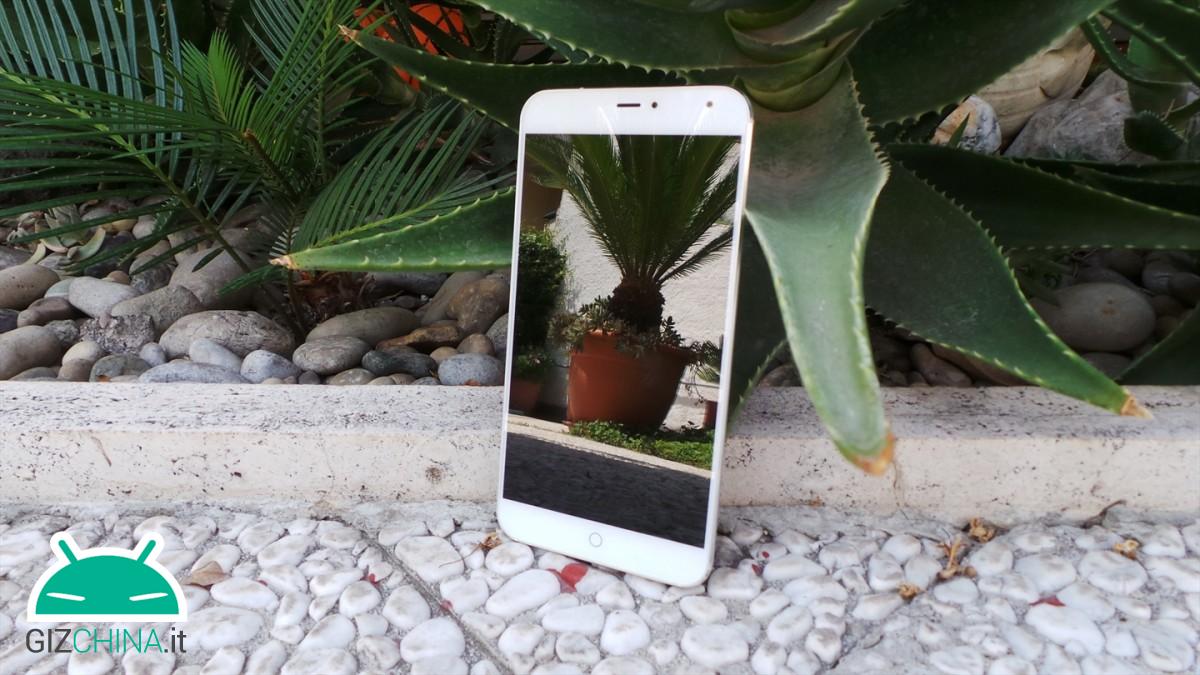 The front part, on the other hand, is dominated by a Gorilla Glass, coated with an oleophobic finish, which will make the device more pleasant to use, especially for the "maniacs of cleaning". 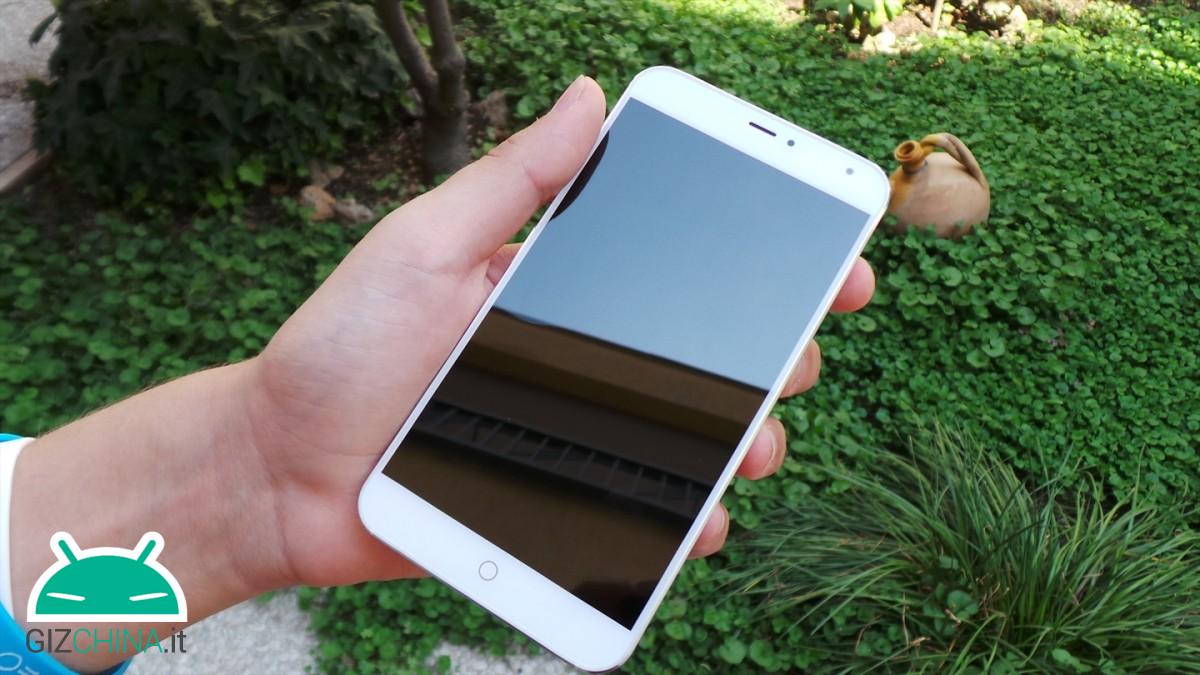 Good ergonomics! The 147 grams of weight are well distributed over the entire surface, but grip and use with one hand theMX4 Ubuntu Edition it will not be very simple, also due to the Aspect Ratio of the display, slightly developed in width, unlike other smartphones. However, the design and the aluminum frame make it satisfying to use the device and make you forget even a few small "defects". 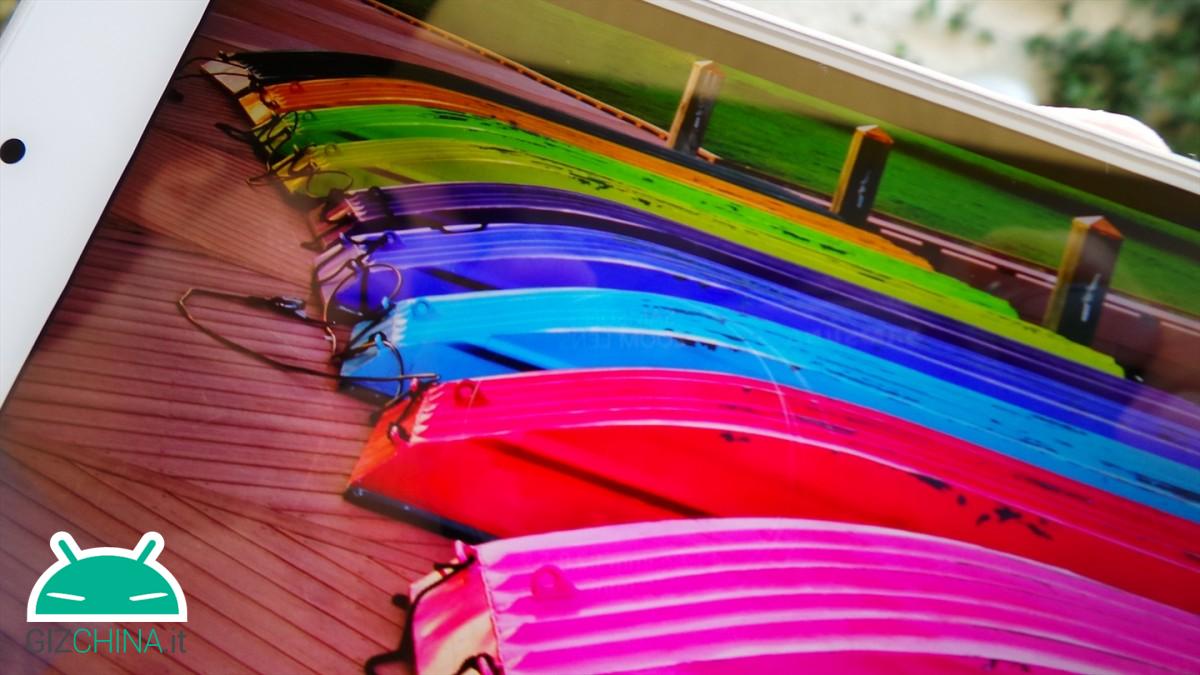 The brightness sensor works very well and, thanks to the software bar accessible from the notification curtain, allows fine adjustment even when it is set as automatic.

The display settings menu does not have special graphic options.

The main novelty of this version of the device concerns, therefore, the installed OS. The software brings the whole user experience of Ubuntu, but in mobile format and with a very simple and intuitive UI, particularly useful for less geeky users.

Once unlocked the device we can count on a multiple number of home (the so-called Scope), with a similar structure, but diversified by topics.

The Main Home can be completely customizable according to our needs, but by default it allows us to manage the accounts entered on the device. Then there is the possibility to register one's position in order to allow the system to suggest all possible activities in the vicinity. 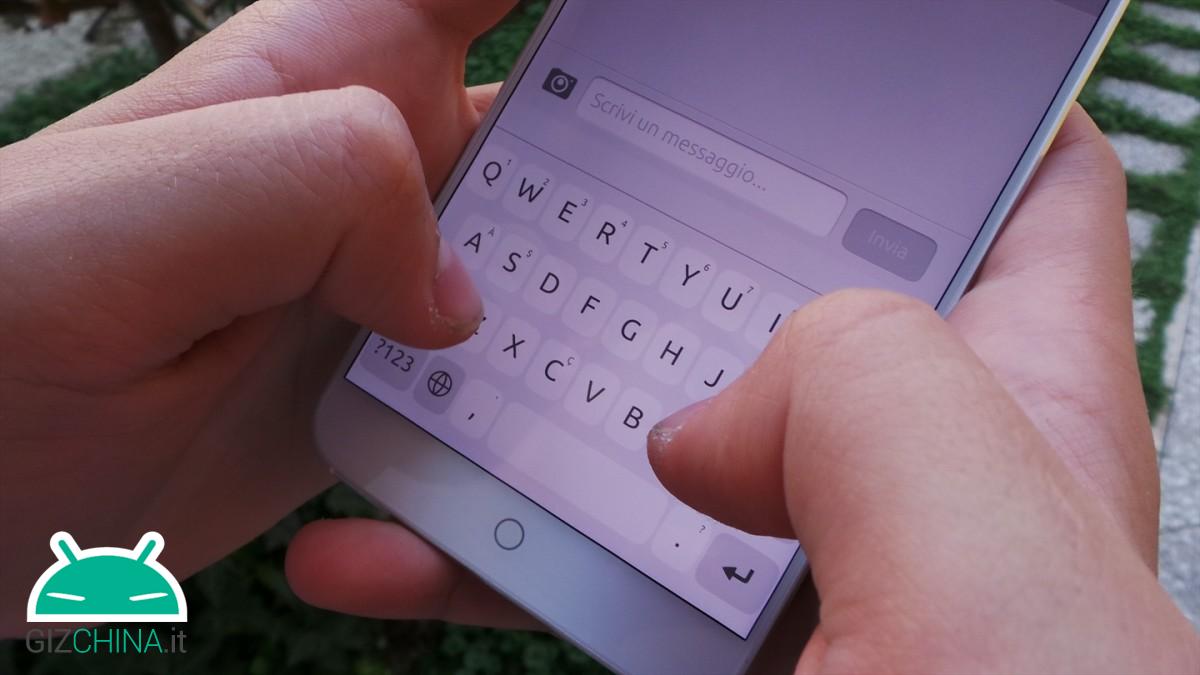 Next we have the screen that contains all the applications and that also refers to the Ubuntu store, where you can download the (few) applications available.

Then we find the news section, where you can view the feeds of sites made available by default. Finally, we find the part dedicated to multimedia, with the Video, Audio and Images sector, where there are also references to the dedicated Social Apps.

The settings menu contains a series of settings, perhaps basic, but which help you manage your smartphone in a simple way.

The software turns out to be still a bit 'unripe and affected by some lag in use. However, the difference in performance between the first version and the one used for the review is already very evident, a sign of constant optimization work by Canonical. Obviously, those who have already had experience with Ubuntu Desktop these aspects will appear almost obvious and obvious.

The rear camera of Meizu MX4 Ubuntu Edition boasts a Sony 20,7 megapixel sensor with dual Dual Tone Led Flash. The sensor proves to live up to expectations, confirming itself among the most performing currently equipped on smartphones. 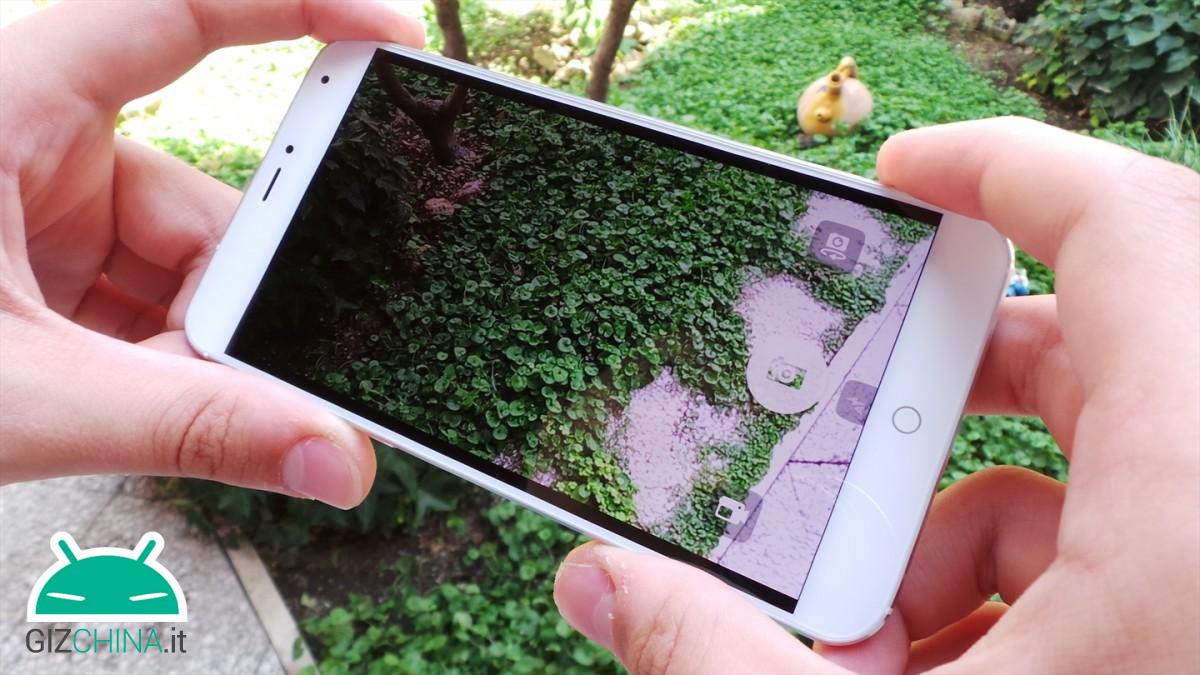 The photos are of good quality, whether viewed on the MX4 screen, or on larger displays. Excellent photos in macro mode, but the sensor also defends itself well in shots taken in poor or difficult lighting conditions. Also good shots in HDR.

The front camera is a 2 megapixel camera, which, however, proves subdued in a 2015 where manufacturers are focusing on very preforming front cameras.

The camera application has a very simple and functional interface, even if there is a lack of particular features.

The video part remains at high levels, with the recording that, according to the specifications, should reach the resolution of FULL HD 1080p in 30 FPS. However, the software currently allows the recording of videos with a maximum resolution of 720p, recorded however with a good fluidity of image and an interesting audio capture. 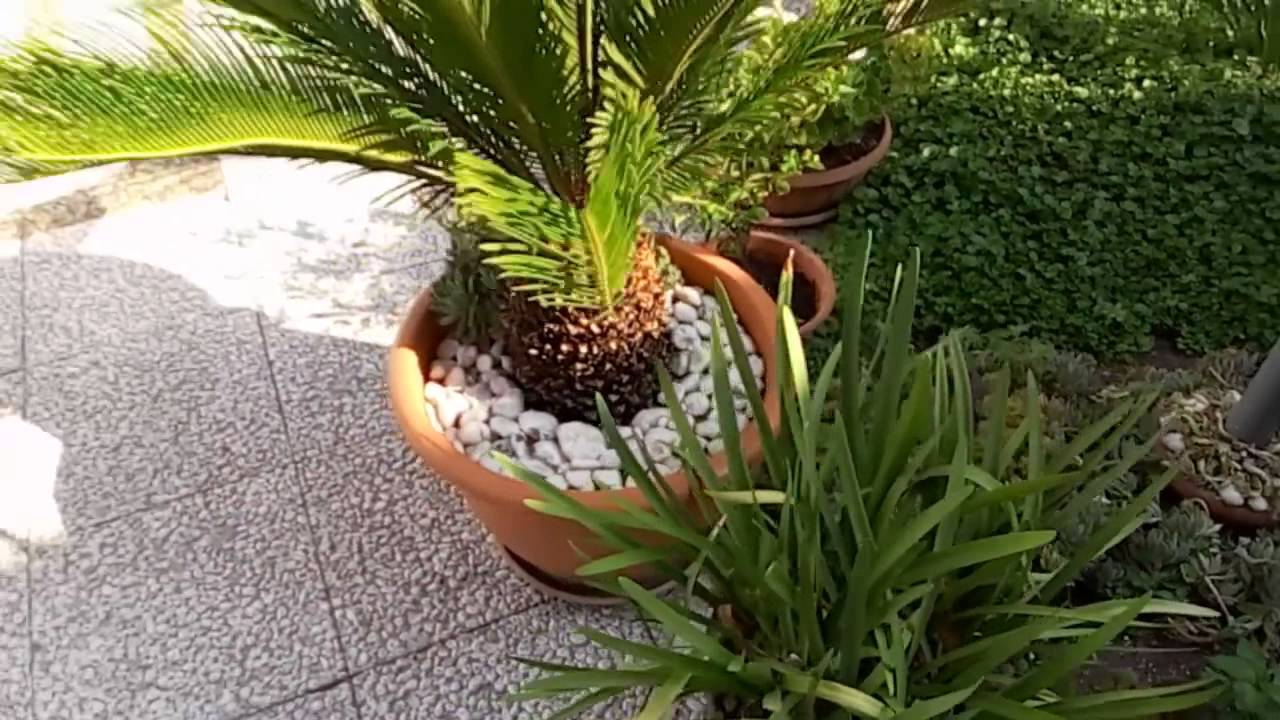 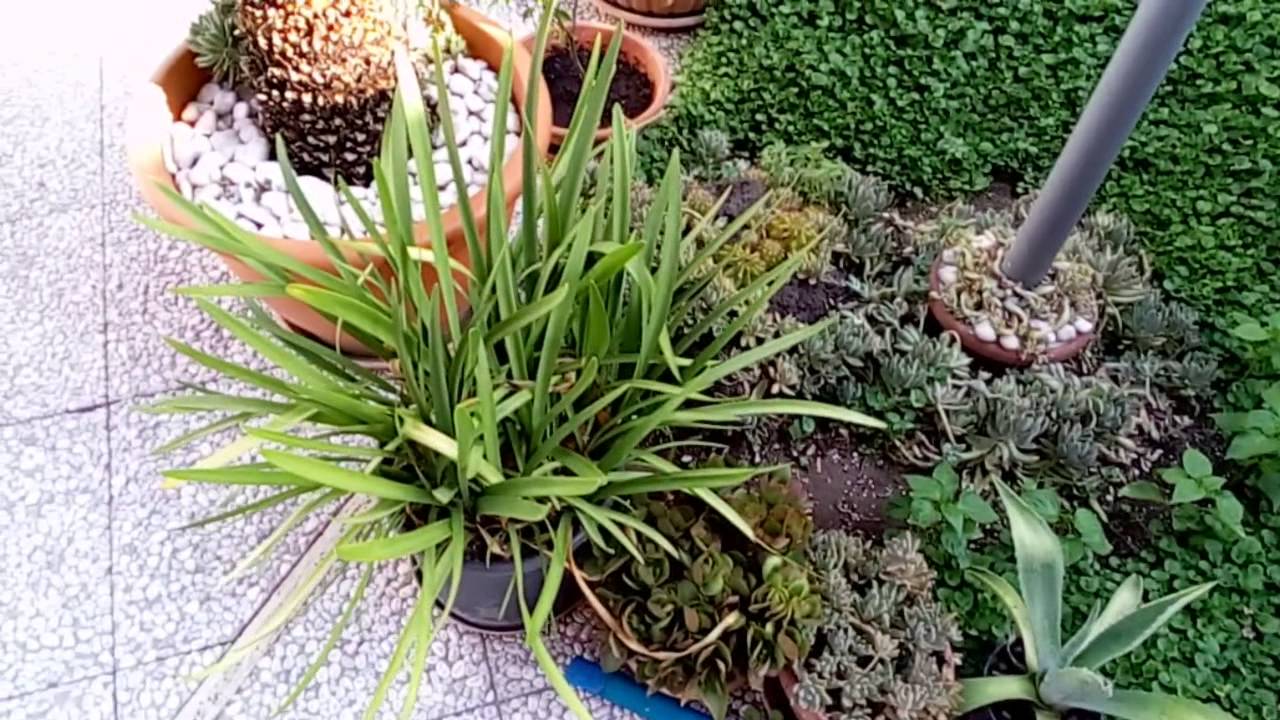 The Gallery has a very pleasant view, with minimal but convincing graphics. Excellent possibility to set the display mode of multimedia files. The videos are played without any problems, the fluidity is good and the audio and video are in sync. However, as it will also be possible to observe in the video review, on some occasions system locks have occurred, due to which it was necessary to restart the device. 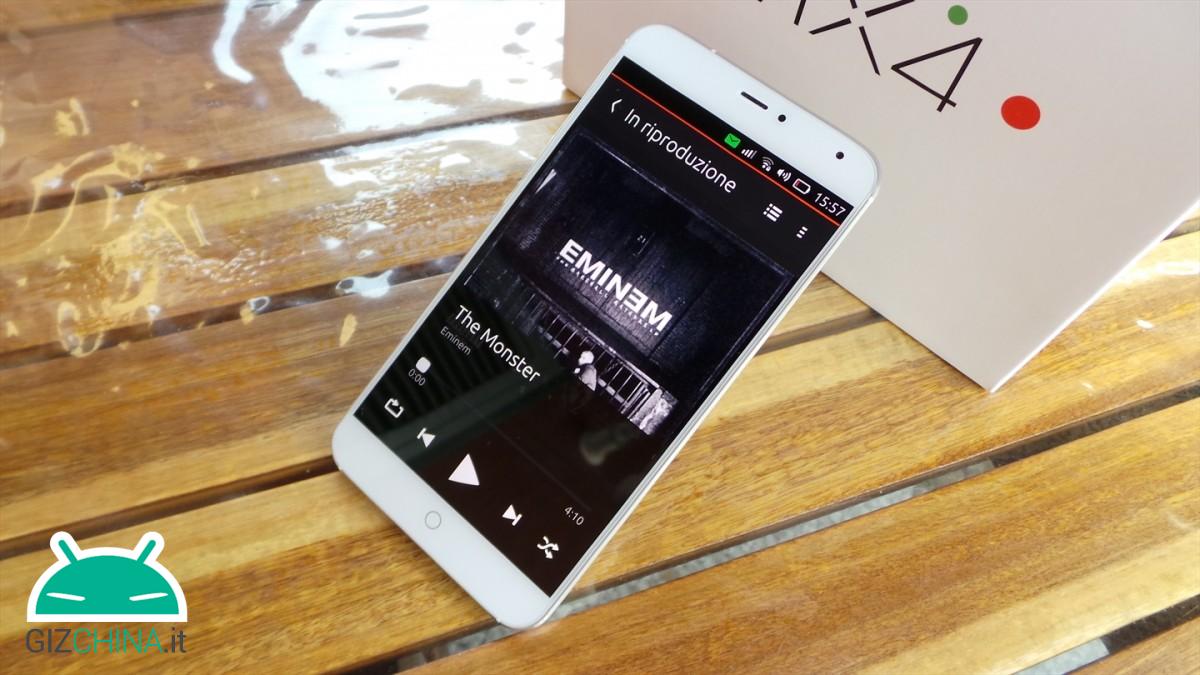 The Music Player goes hand in hand with the Gallery regarding the interface design. Here too, very simple and functional, without frills and without too many settings.

The default browser has a pleasant interface, but even in this case there is a lack of settings, sometimes basic, such as the possibility of Web browsing in Desktop Mode. 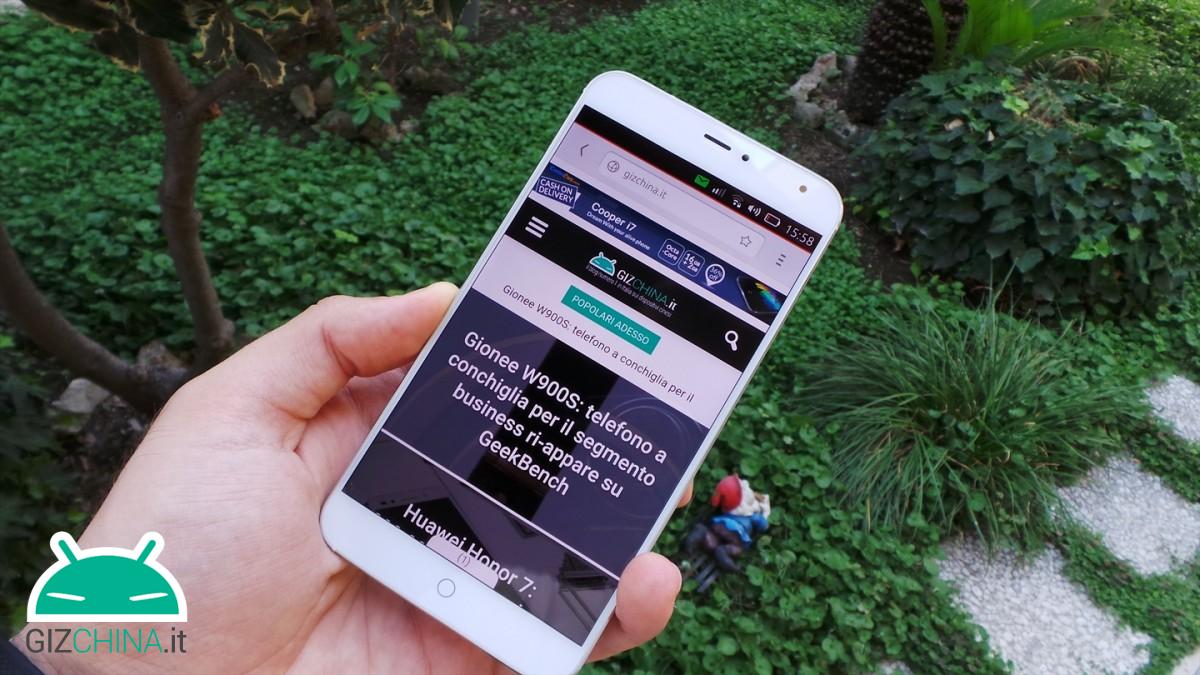 However, web browsing does not have particular problems, except in pinch to zoom, not particularly fluid, but not impossible to perform.

The autonomy of Meizu MX4 Ubuntu Edition is certainly not one of the strengths of the device. The 3100 mAH made available by the manufacturer are a good amount, but the device heats up too much, even if used in an average intense way, and the heat produced generates a consequent drop in performance. 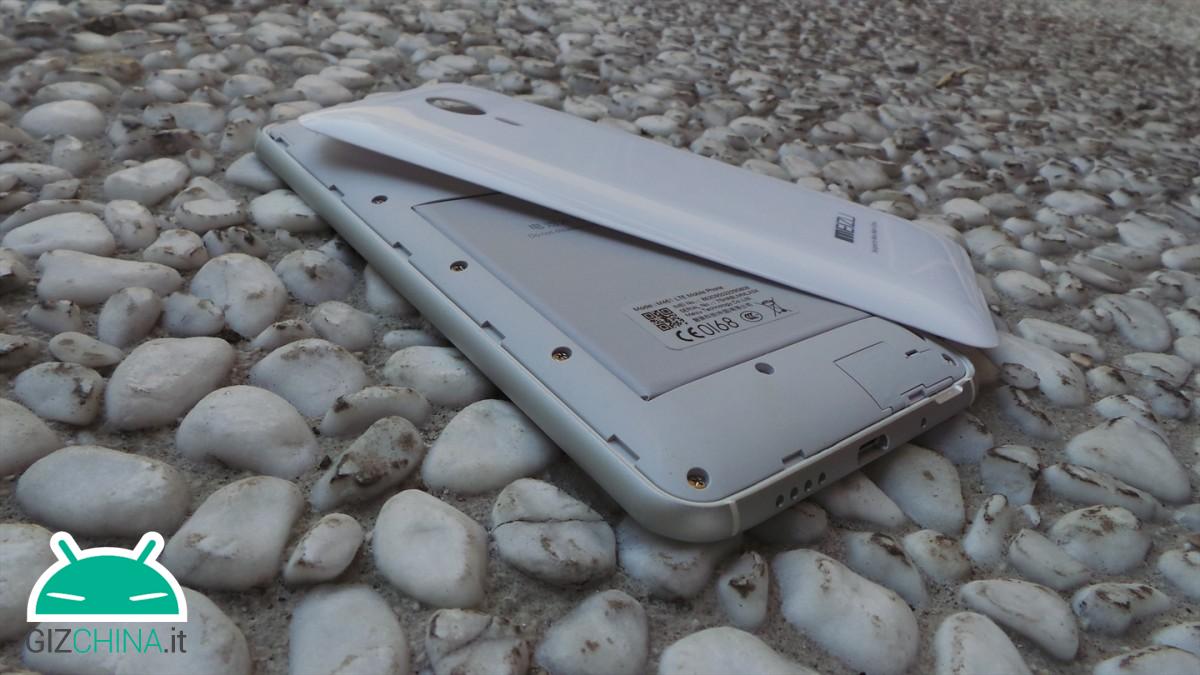 We are not talking about a smartphone devoted to the Business sector, but Meizu MX4 Ubuntu Edition allows you to take advantage of the EverNote features to have all the various files always with you. Unfortunately, there is no File Manager and a dedicated Manager for Office files.

In an industry where "the pie is divided" among the tech giants, can a new OS make sense? Surely! With smartphones that, today, all seem to be the same, a breath of renewal was not only desirable, but also desired by many users! Will Ubuntu succeed in this difficult task? 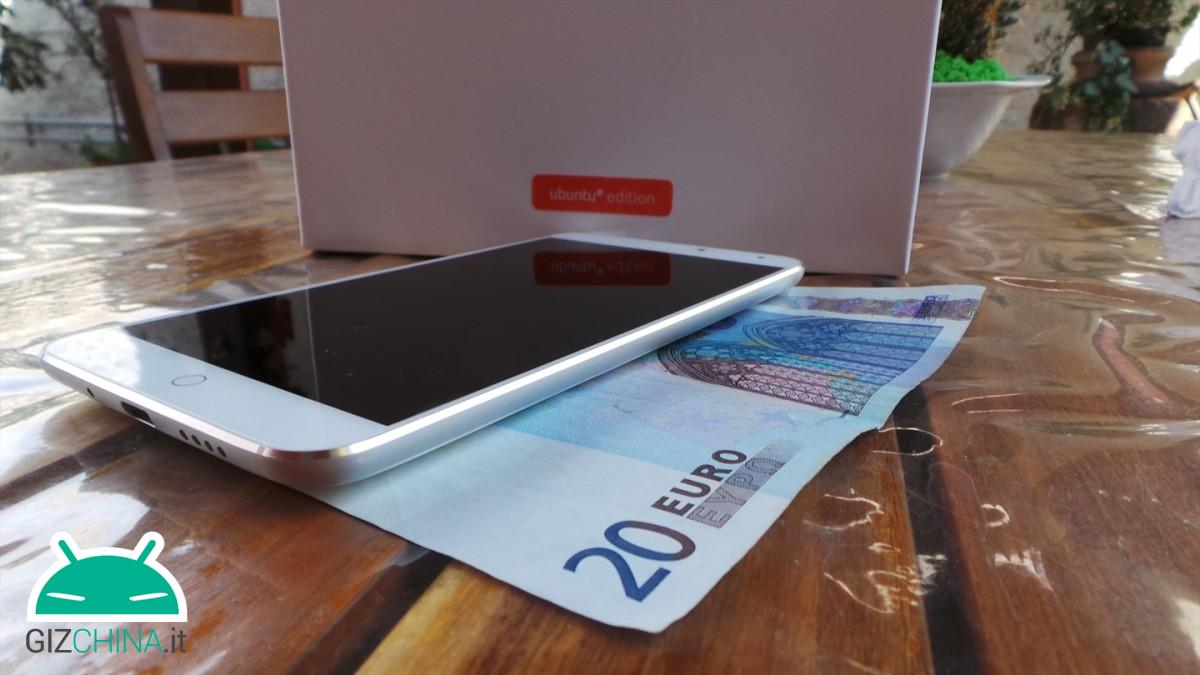 Maybe. For the moment, the OS appears immature, cumbersome and without that fluidity sought today even by the average user. However, the handling of the User Interface is very pleasant and intuitive. A "pinch" of customization would certainly be welcome, as well as some additional settings / features. 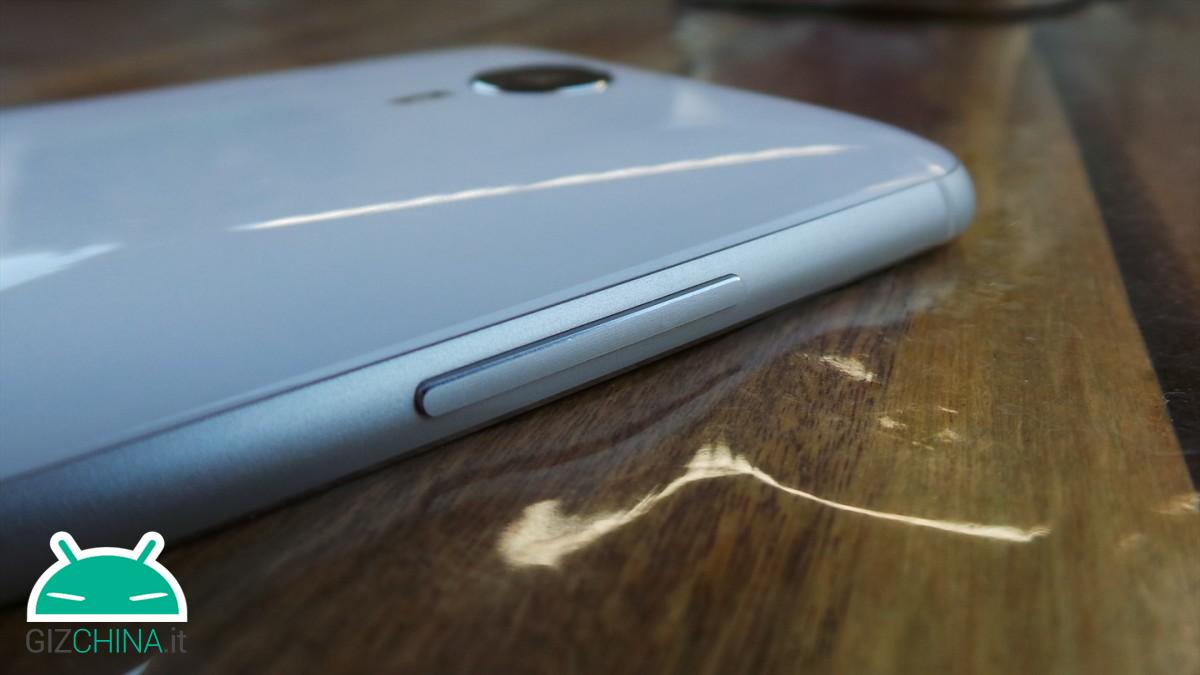 The ultimate goal of Canonical with Ubuntu OS for mobile is that of total convergence, that is the replacement of the fixed PC with the possibility of using Ubuntu Desktop with the smartphone connected to an external monitor. Science fiction? Many believe in it and, if done, this could certainly represent the trump card to conquer, over time, both the most geek users and the less, allow us the term, "geeks". However, a first step towards achieving this goal will be the necessary implementation of a greater number of applications.

The Meizu MX4 Ubuntu Edition is available at 299 euros with shipping from Italy, but by invitation only. The invitation will be obtained by overcoming a sort of "game" that you will find at the following link: