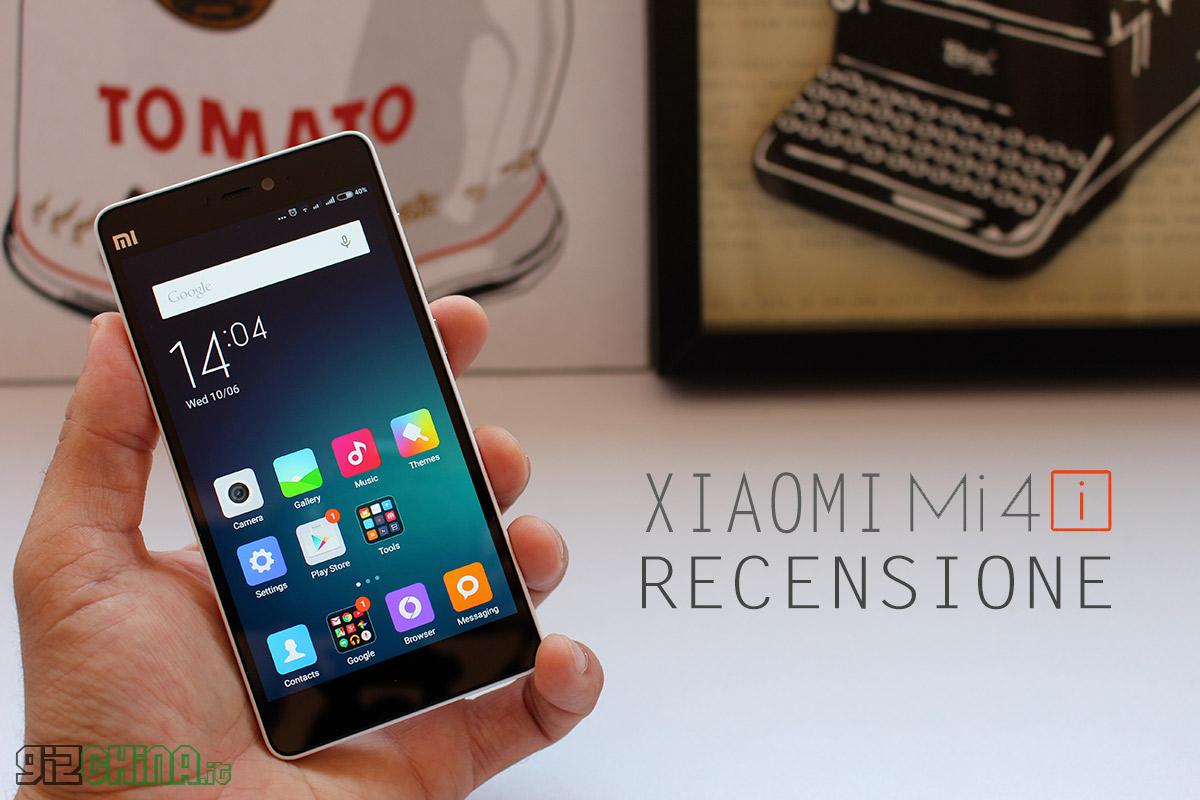 With the launch of the new Mi4i, Xiaomi has tried to access the mid-range of the mobile phone market in an overwhelming way. The intent of the insatiable company is, of course, to dominate also this market segment. Will she be able to hit the target? Let's find out together in the full review of the Xiaomi Mi4i!

The Xiaomi Mi4i is available in pre-order on Topresellerstore.it, store where you can get a discount through the voucher GIZCHINA. 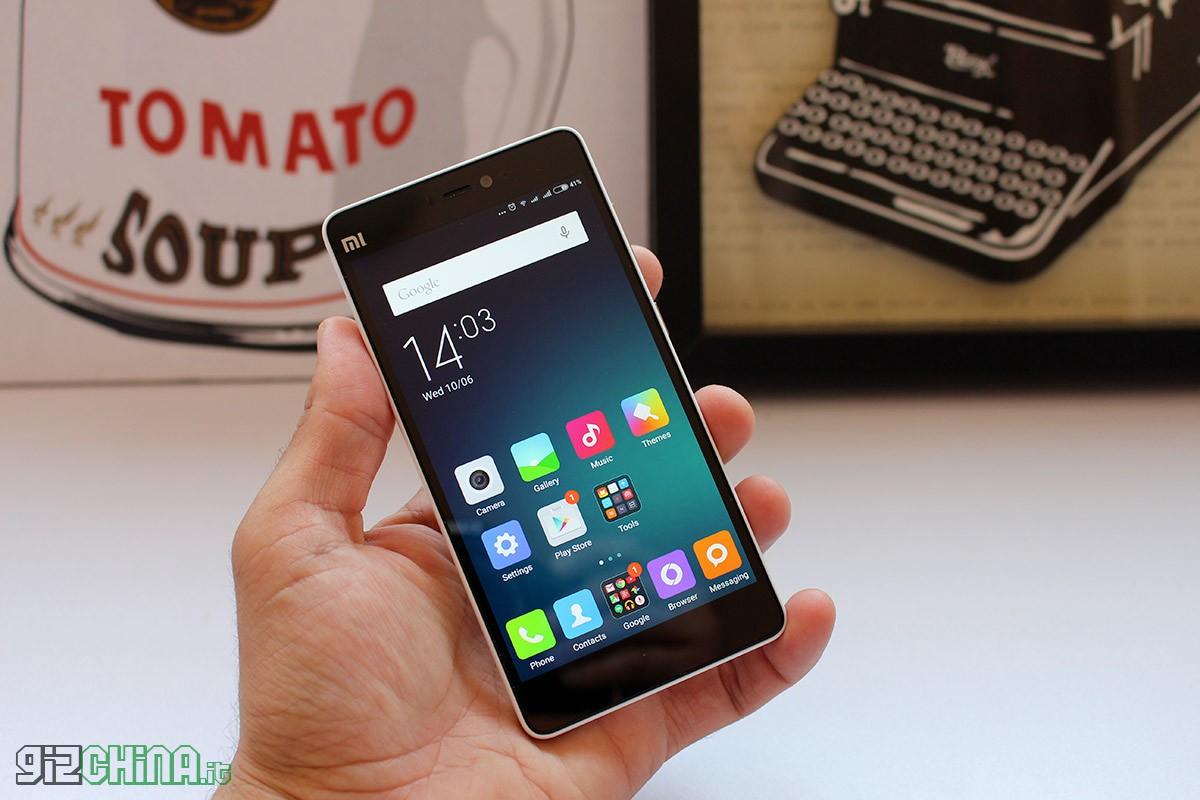 Xiaomi Mi4i (Mi 4i), the review of GizChina.it!

Lo Xiaomi Mi4i is a device that boasts a mid-range hardware compartment characterized by a display from 5 inches with Full HD resolution, processor octa-core Qualcomm Snapdragon 615 with architecture a 64-bit and clock a 1.65 GHz accompanied by 2 GB of RAM, Adreno GPU 405 e 16 GB of internal memory.

Here are the complete specifications of the Xiaomi Mi4i: 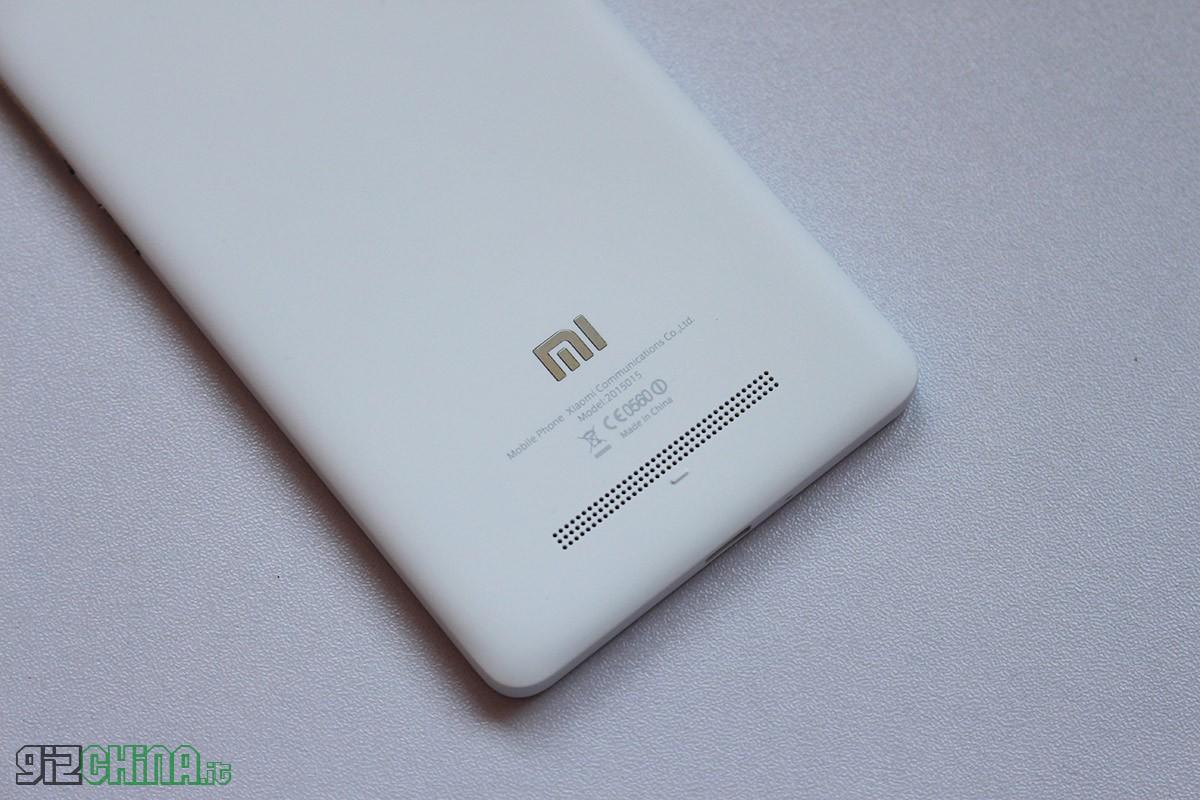 Lo Xiaomi Mi4i, unlike the last terminals presented by the Chinese manufacturer, is made using "less noble" materials, such as, for example, the polycarbonate used in the construction of the rear body.

This choice seems to us to be quite apt on the part of Xiaomi since the back cover of the terminal gives an excellent sensation to the touch and an equally evident sense of compactness, limiting however its weight.

In addition to the nature of the construction materials, the Mi4i is also characterized by different dimensions compared to the previous Mi4. The latter, in fact, in addition to being heavier, is more often (8.9 mm against 7.8), longer (139.2 mm against 138.1), but smaller (67.5 mm against 69.6).

The dimensions of the Xiaomi Mi4i, although not far removed from those of the "big brother", seemingly seem inferior, and this, most likely, thanks to the harmoniousness of its design, transmitted in particular by the smooth and "soft" lines of the back cover.

Below is a Dimensional comparison between Xiaomi MI4i and Xiaomi Mi4:

Now let's see the arrangement of the Xiaomi Mi4i keys: 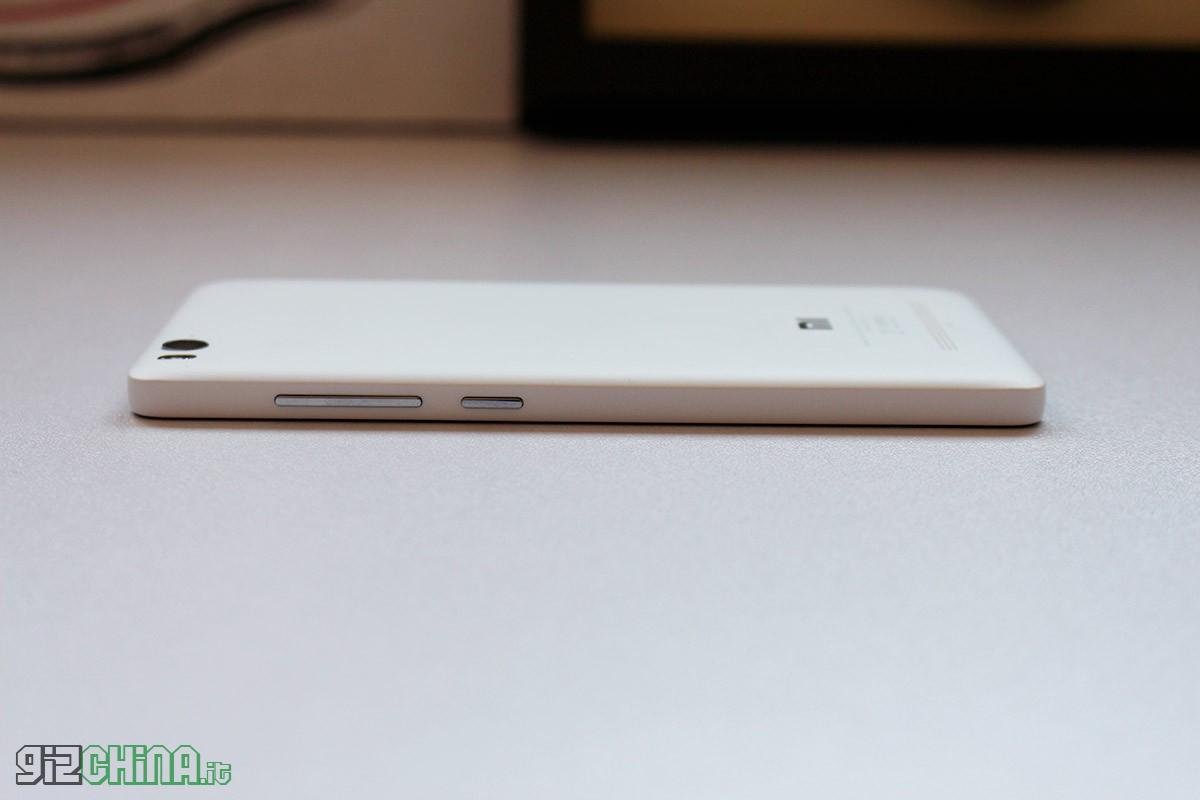 On the right profile we find the on / off button and the volume rocker. 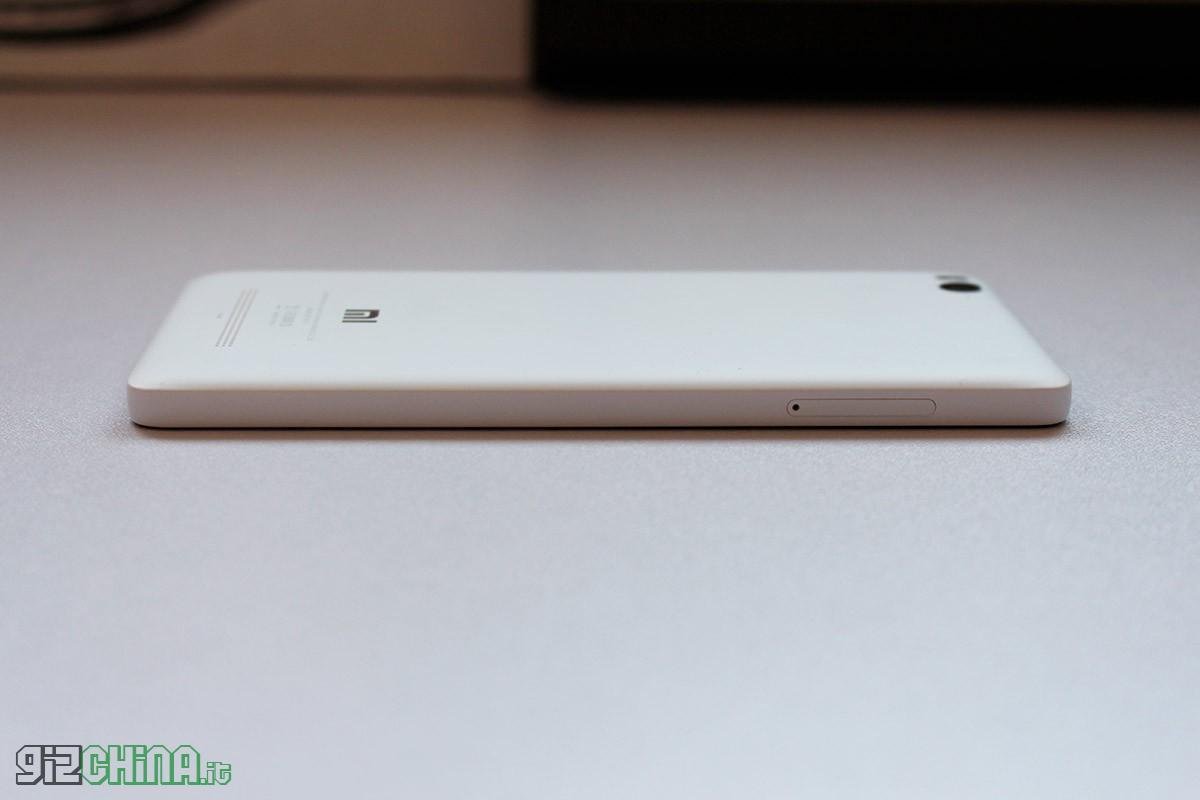 On the left profile the double sim slot with LTE connectivity, both in Micro format. 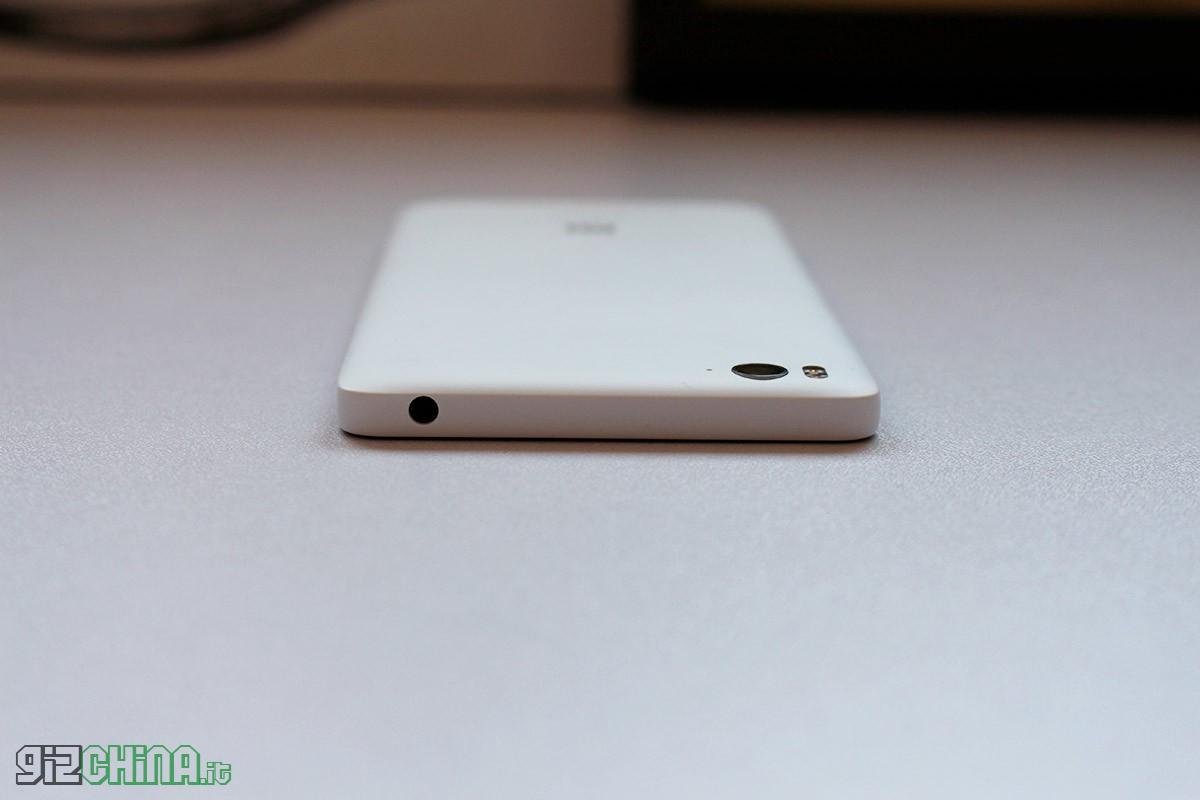 At the top we find the 3.5 jack for the earphones. 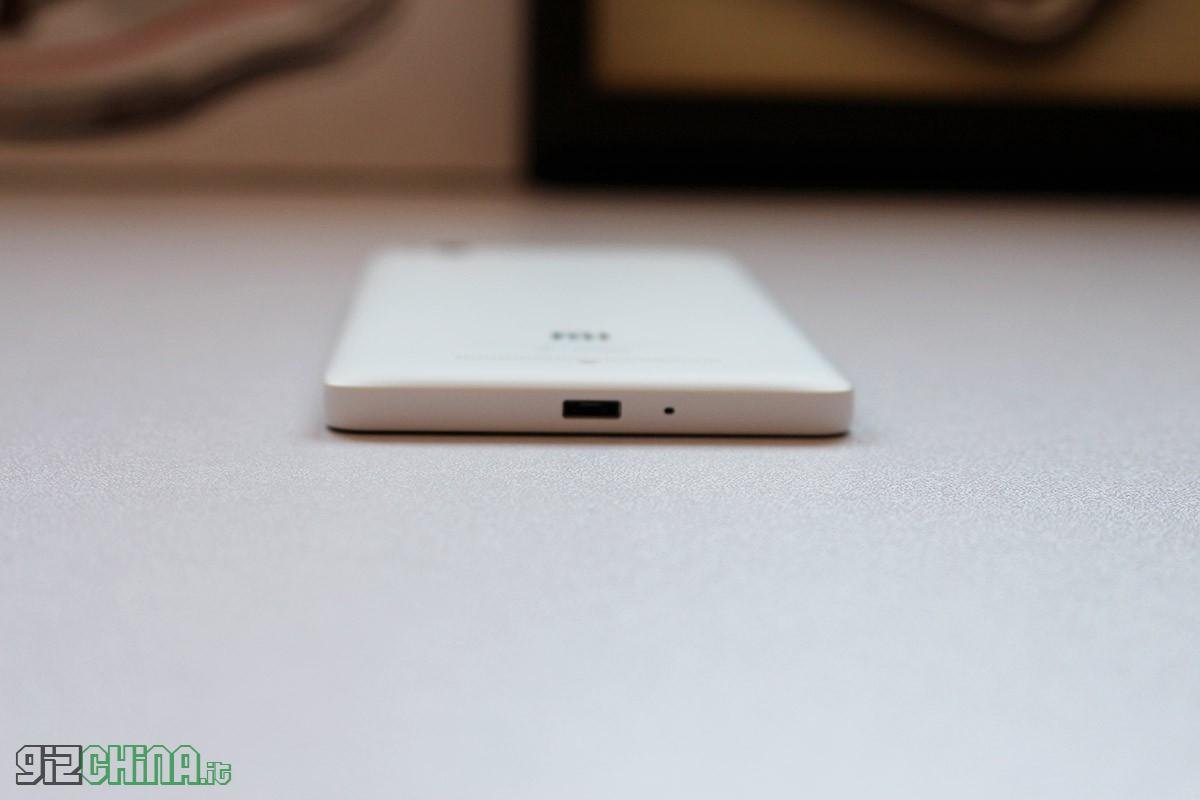 At the bottom of the USB port micro USB (MTP/OTG) for recharging and transferring files. 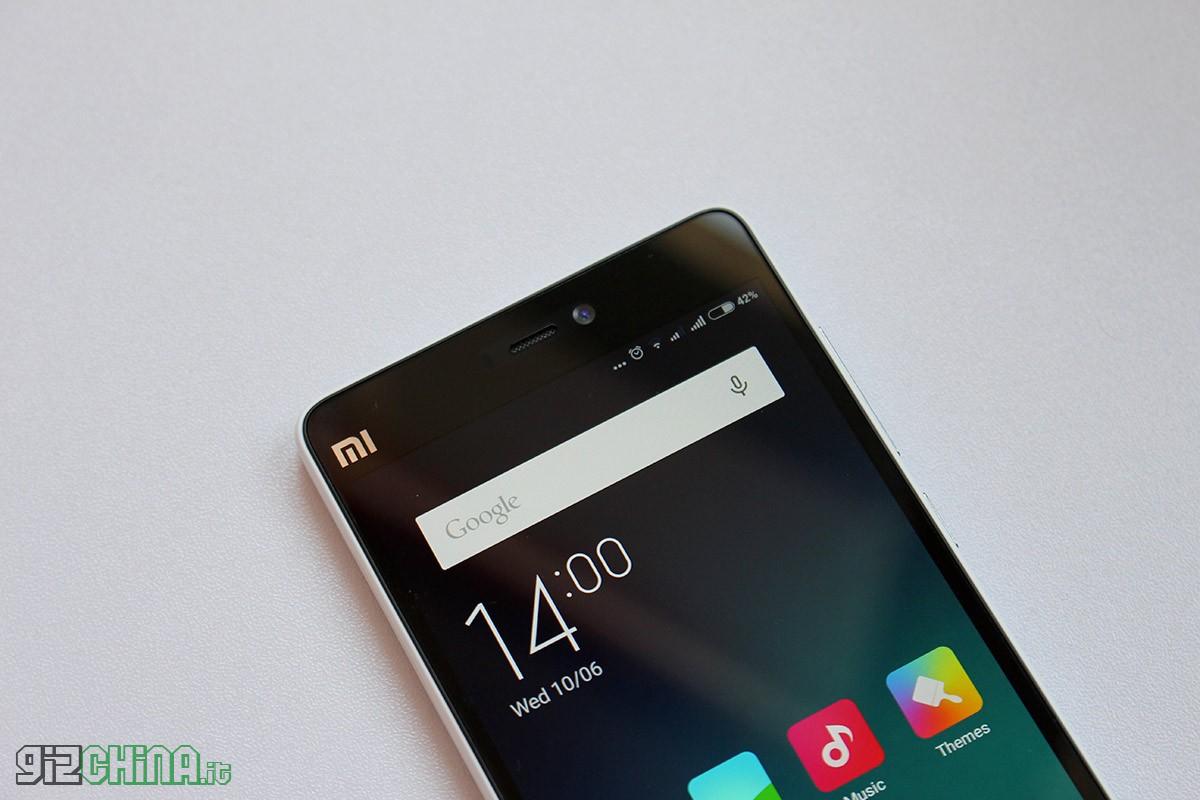 Frontally we find, at the top, the capsule, the camera from 5 mega-pixels with opening f / 1.8 e wide angle of 80 °, the brightness and proximity sensors and a small one Notification LED RGB. At the bottom, instead, there is the backlit navigation keys bar. 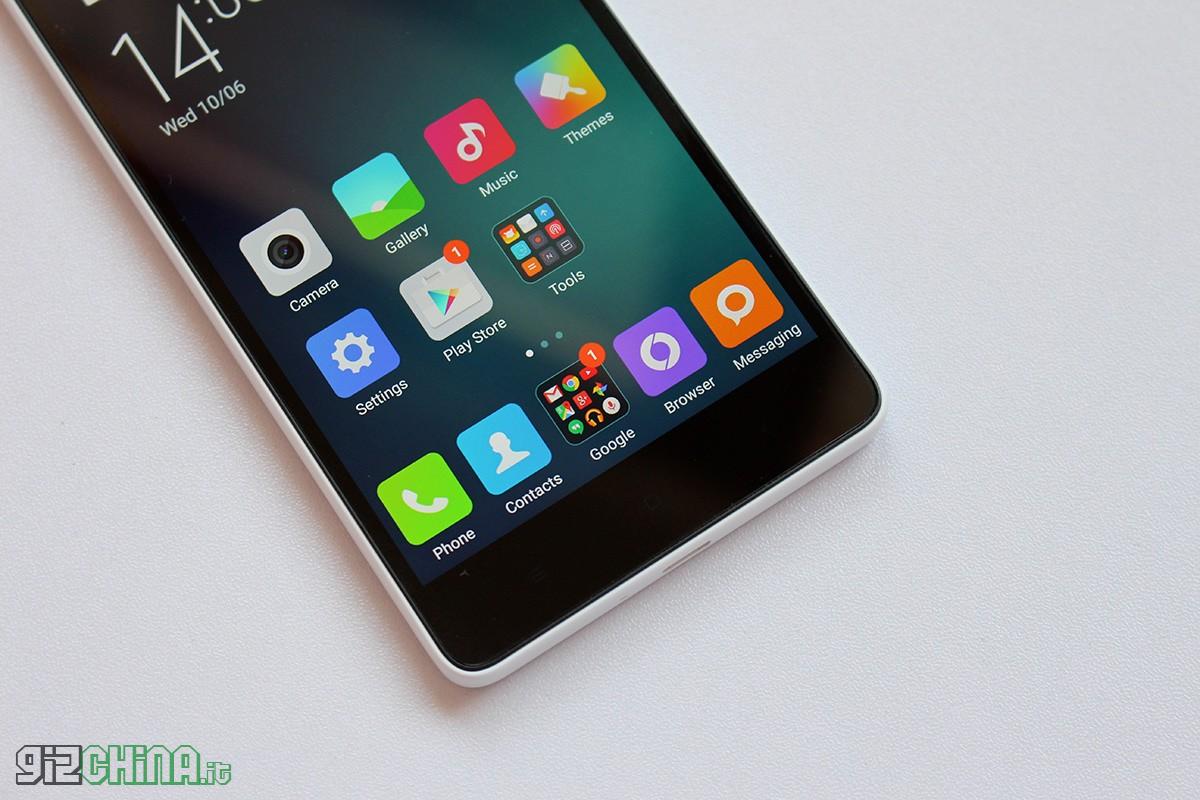 On the back, finally, the rear camera is positioned from 13 mega-pixels with opening f / 2.0 equipped 5 lenses and double Flash LED Dual Tone, in addition to a second microphone for the reduction of environmental noise. 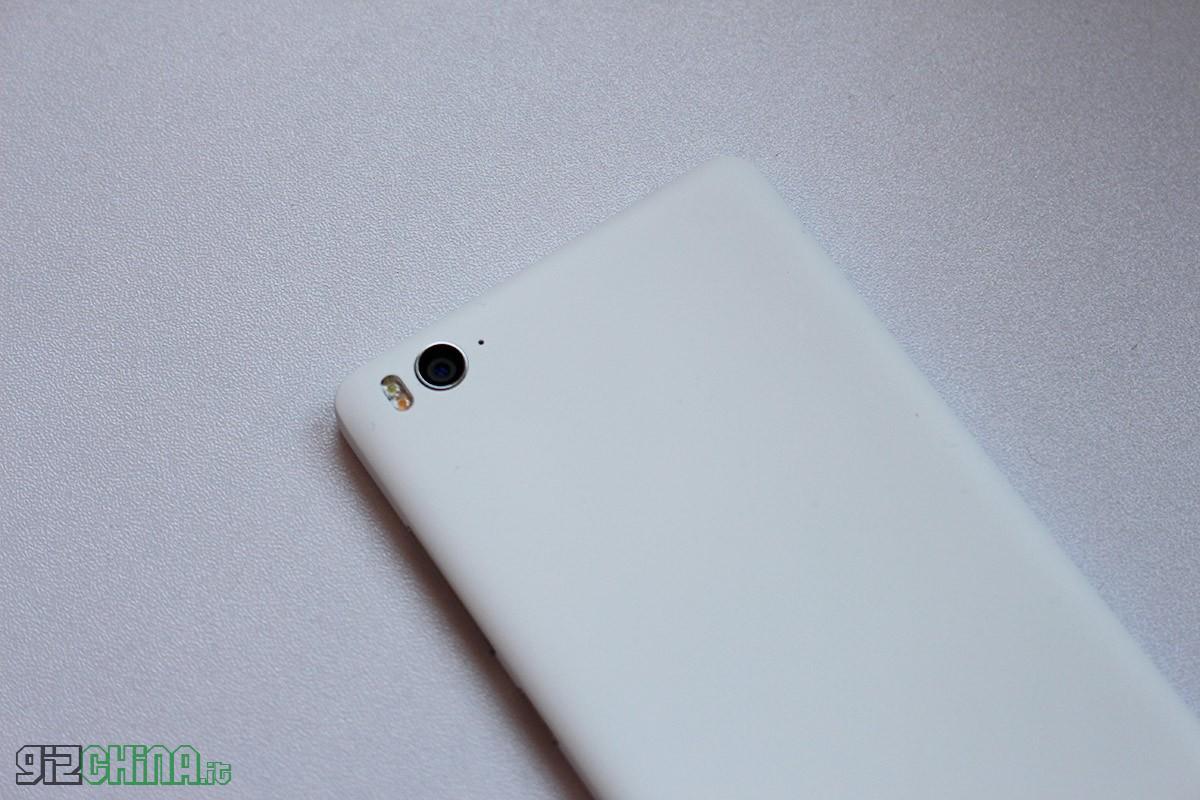 At the bottom there is the logo MI and the single system speaker with a small plastic step, useful for reducing the suffocation of the audio during the musical friction with the device placed on flat surfaces. 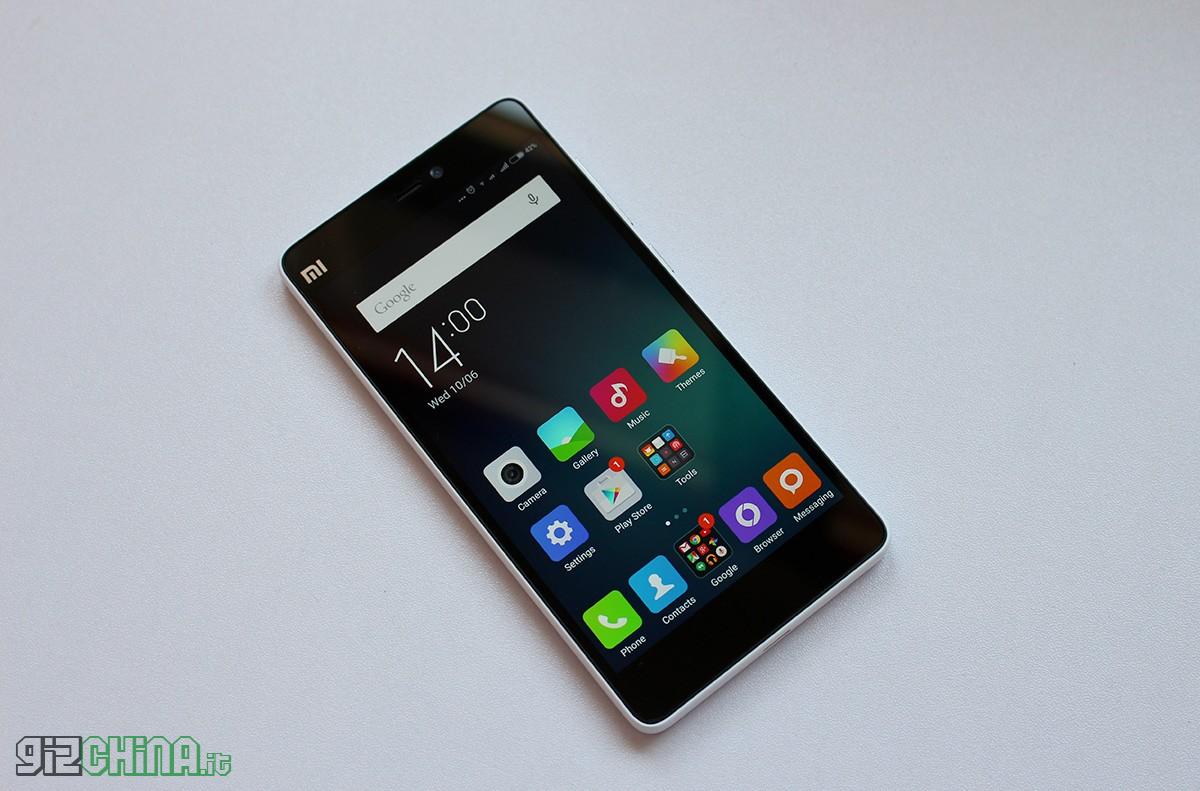 The unit mounted on this device is characterized by one reproduction of the whole color range very faithful to reality, with the exception of only the black that, in the angled view, highlights the classic color change from IPS.

In general the clarity and brightness of the panel are excellent and also the light sensor seems to be quite reactive.

On the Xiaomi Mi4i we find installed a version of the MIUI 6 based on Android 5.0.2 Lollipop. The ROM has not yet been translated into Italian, but certainly will not delay the classic update released by friends of Miui.it.

On the ROM, in addition to the classic MIUI features, we find an advanced user profile manager, useful for energy saving. This menu, which can be reached using the "Security" app, makes it possible to use pre-set profiles or generate other ad hoc profiles in order to manage, even if programmed, use / non-use, on / off, etc. WiFi, Bluetooth, GPS and many other features of the device.

The system does not appear to be very fluid, in particular due to the limited amount of RAM left free by the ROM at boot conditions (about 850MB on 2GB). From this point of view the MIUI confirms itself as one of the most "hungry" OS in terms of absorption of RAM resources.

All this generates lag and slowdowns that affect the general experience of using the device, much less fluid and "natural" than the one detected on the Xiaomi Mi4. 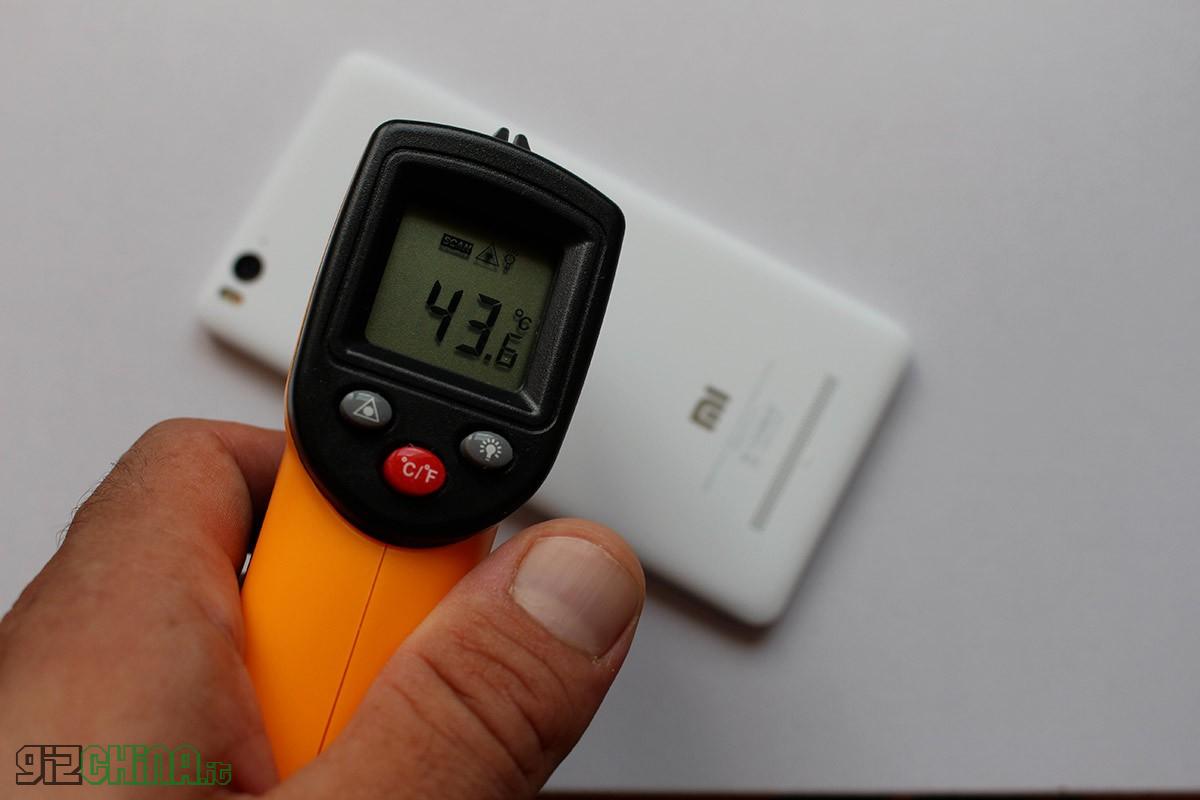 Following the recording of the video-review (25 approximately minutes of use) and the video-test of Antutu Benchmark that follows we performed a measurement of the temperature in the upper back of the device. The maximum temperature detected is that shown in the picture, or 43.6 °, or a level not very low, but not excessive.

The Xiaomi Mi4i is a device characterized by a mid-range hardware, thanks to which, however, it still managed to achieve good results in the various benchmark tests performed.

Here are all the other scores obtained from Xiaomi Mi4i in the various benchmark tests:

La Adreno GPU 405 of which it is equipped Xiaomi Mi4i represents a guarantee in terms of performance in the graphics processing and a proof is the performance of the device in gaming.

Su Real Racing 3in fact, the reproduction of the game elements is at best (including the reflected in the rear-view mirrors) and the fluidity of play is absolutely devoid of lag and uncertainties, even when there are many polygons on the scene to be processed. Therefore, the gaming profile is certainly promoted.

No problem in navigation - both in 3G and, when present, in 4G - as well as in the reception of the device, always at a good level.

Despite its mid-range nature, the Xiaomi Mi4i is equipped with a photographic portfolio from Top of Gamma.

As already mentioned, let's talk about a rear chamber with sensor from XMUMX mega-pixel and with F / 13 aperture and a front 5 mega-pixel with wide opening F / 1.8 e wide angle of 80 °.

La front camera allows you to make very good shots in good light conditions, while they are a bit 'noisy when the brightness level is reduced.

Thanks also to the very complete room app of MIUI 6, the rear sensor snap is very fast, as well as the focus.

With the decrease of the lighting level, however, in the shots you can see a little 'photographic noise. However, they maintain a good level of quality.

The rear sensor installed on the Mi4i is equipped with a double LED flash with double tone, thanks to which it will be possible to obtain shots characterized by a uniform diffusion of light, even on reflecting surfaces.

Good, finally, the videos to 1080p, which are characterized by a fairly fast focusing and an equally good stabilization.

Therefore, the photographic section of Xiaomi Mi4i is absolutely to be promoted.

With regard to the video playback, we can confirm what has already been seen in previous reviews, or that the Snapdragon 615 does not allow playback of files in 4K with H.264 codec.

No problem, however, with our other video format test .MKV to 1080p, with which the reproduction is perfect, even in the fast passage from one side to the other of the movie. 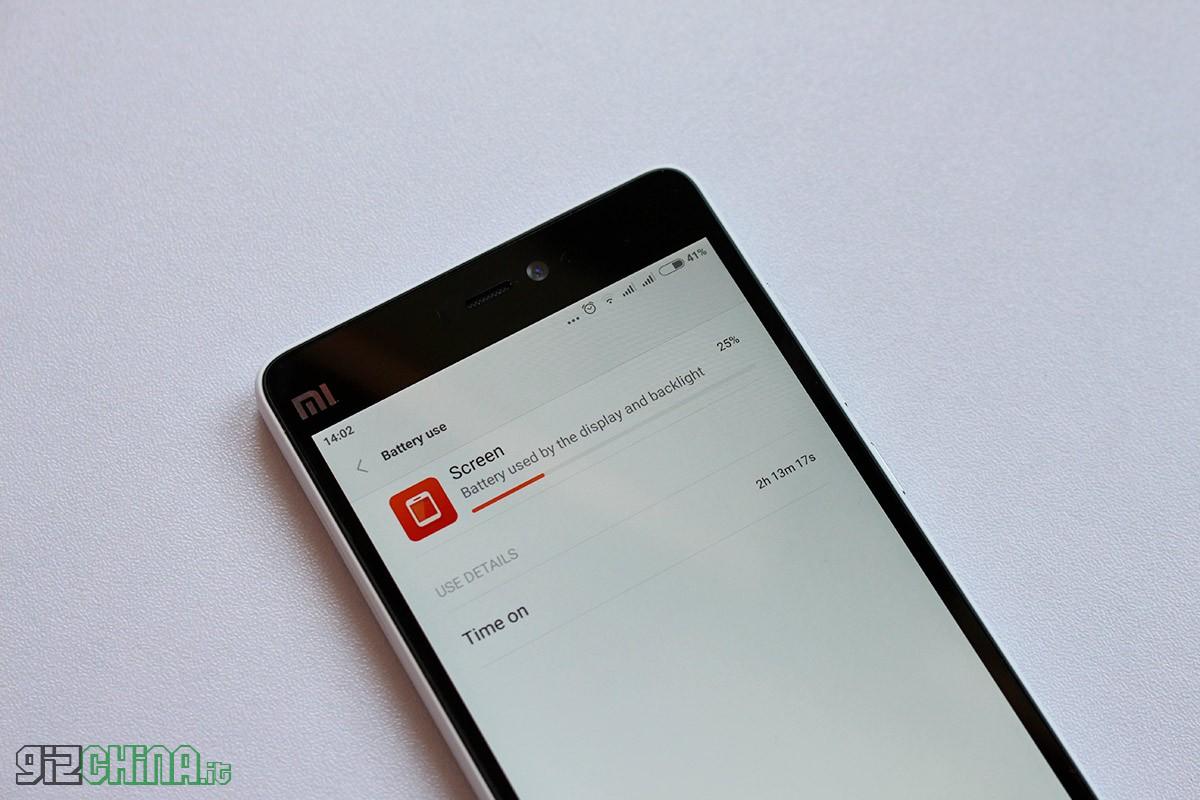 The large battery of the Xiaomi Mi4i is characterized by a fairly good autonomy. In fact, after the canonical 3 recharge cycles the same has stood on almost 4 hours on screen turned on, with heavy use, with both active SIM and in balanced mode. Furthermore, it should not be underestimated that the devices equipped with MIUI ROMs usually show a marked improvement in autonomy with subsequent updates, sometimes even after a few months.

Using the mode performanceon the other hand, the hours of the screen lit change to around 3. The performance improvement with this active mode is quite evident, even if, considering the autonomy / performance ratio, I personally advise you to use the balanced mode.

For the final considerations of this review it is necessary to make a rather more articulate speech, so as not to lead you into error / confusion. The Xiaomi Mi4i is a device that, in a certain sense, "divided me", because, on the one hand it struck me a lot (design, solidity, compactness), on the other it left me a bit 'bitter in the mouth because of performances that are not absolutely worthy of the "Xiaomi" brand.

Except for the aspects relating to usability of the device, the Mi4i from a possible comparison with the Mi4 would very likely come out, also in consideration of its selling price which, all in all, is not so low.

However, it is important to underline that with what has been said up to now I do not want to say that Mi4i did not like it, on the contrary. What I intend to make you understand is that if in some ways, as a technology sufferer, I would still buy the Xiaomi Mi4i, following a more economic / rational reasoning I would direct my choice to other devices more convenient in the performance / price ratio, one for all the Xiaomi Mi4 or, also, the Meizu M1 Note, the latter always available on Topresellerstore at a lower price of 40 euros compared to Mi4i (239 € or less with GIZCHINA discount code).

Considering the first mentioned possible optimizations of the upcoming MIUI updates, the Mi4i is therefore "postponed to September", When we try to understand if all the good conditions of this device will be supported by good performances.

However, I remind you that the Mi4i is available on Topresellerstore.it with shipping from Italy and 24 months of Italian warranty, discounted for you readers thanks to the voucher GIZCHINA.

OPPO Watch, wanted developers: the smartwatch contest of the ...