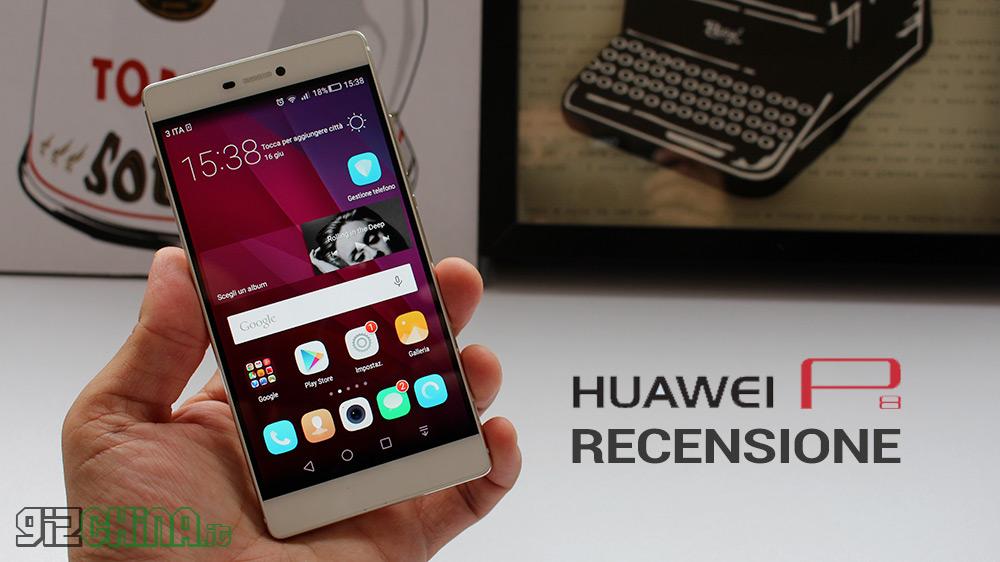 The device subject of today's review is produced by a company that no longer needs any introduction, as it can be counted among the world's Top Brands. I am obviously referring to Huawei and its new Top of the range, or the Huawei P8.

We thank the company for sending the sample, which is characterized by a premium design and an almost obsessive attention to detail, as evidenced by the design of the sales box, which you can observe by scrolling further down. 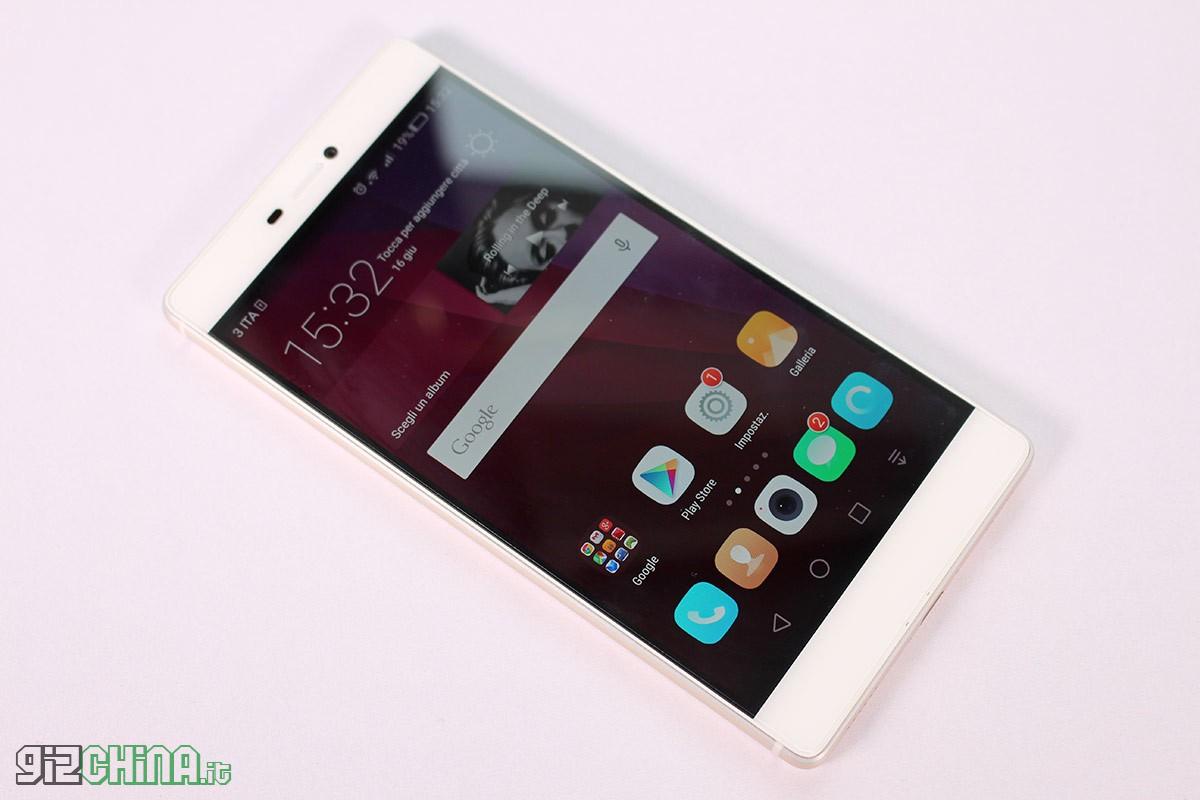 I thank Huawei for sending this sample of Huawei P8 that, I remind you, you can buy on Amazon.it at about the price 449,99 €.

Huawei P8, the review of GizChina.it

The first aforementioned obsessive attention to detail is in fact clear in the design of the Huawei P8 sales box. Considering that, as the well-known proverb states, “a picture is worth a thousand words”, I leave you to a gallery of photos of the packaging in which the device arrives.

Il Huawei P8 it is, as anticipated in the introduction, the new Top of the Range of the company and as such it has a very interesting specific package.

We speak, in fact, of a device equipped with a display from 5.2 inches with resolution Full HD 1920 x 1080 pixel (equal to PPI 424) protected by a Corning Gorilla Glass 3, a processor octa-core to 64-bit with big.Little architecture Kirin HiSilicon 930 accompanied by 3 GB of RAM e 16 GB of internal storage, allocated in a single partition by 11GB and expandable via micro SD. From the software point of view on the device we find the proprietary ROM installed EMOTION UI 3.1 based on Android Lollipop 5.0.

For this new device Huawei has also paid much attention to the photographic industry, providing the P8 with one rear camera from 13 mega-pixel a 4 RGBW colors with mechanical OIS, dual LED Flash dual tone e dedicated image processor. The front camera, on the other hand, features a 8 mega-pixels with specific features dedicated to selfies.

Il Huawei P8 tested in this review is not equipped with dual SIM support, but the company has nevertheless launched a version with a dual card, unfortunately reserved exclusively for other markets. Obviously, there is no lack of connectivity support 4G LTE Cat. 6.

The premium nature of P8 is fully expressed also by its design, characterized by the use of quality materials and, in particular, by a "single body" made of aluminum. 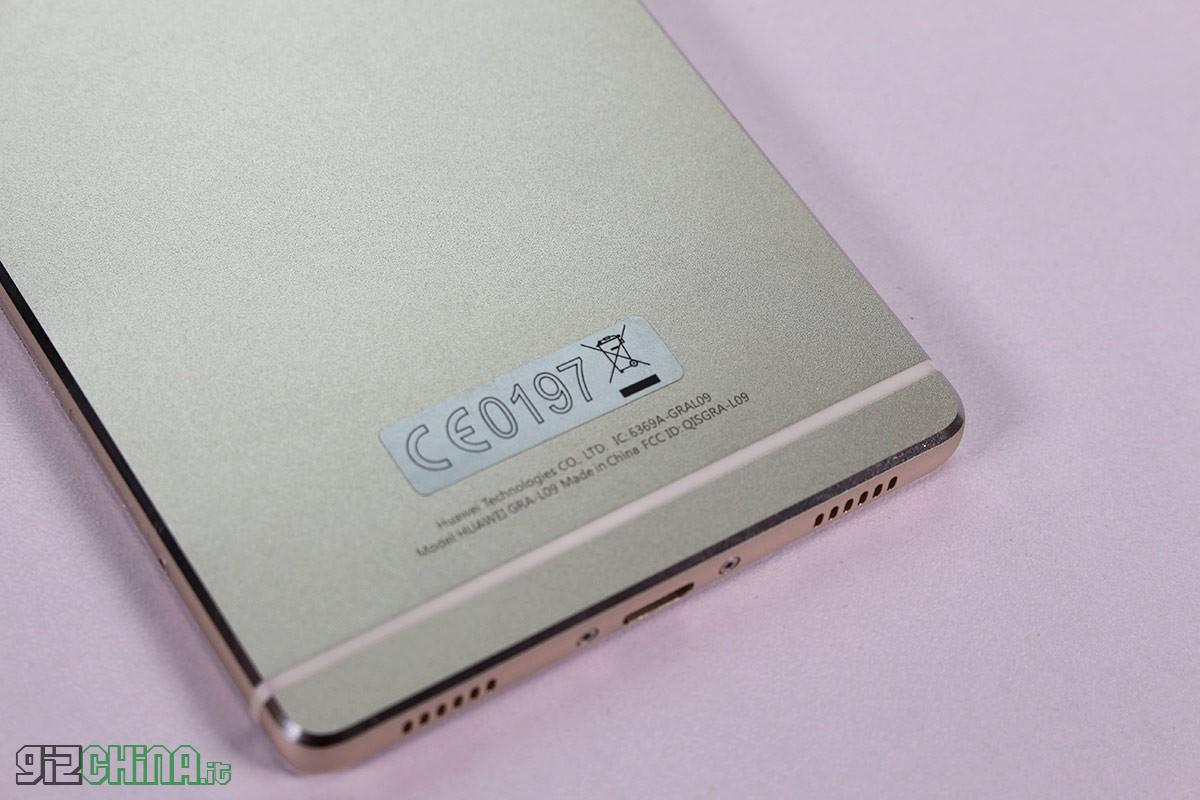 The left side is "clean". 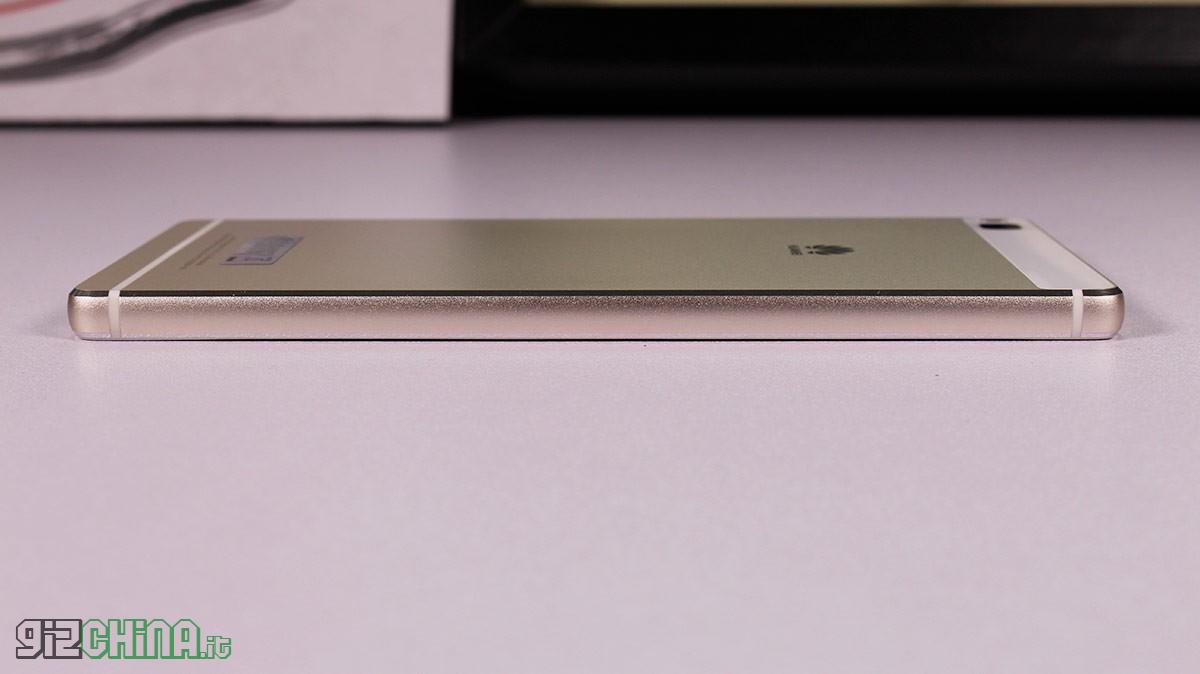 On the right side we find both the power on / off and stand-by button (made with a very pleasant knurling both to the touch and to the sight) and the volume rocker, two removable trays, one for the SIM (nano SIM) and the 'other for the insertion of the expansion micro SD. 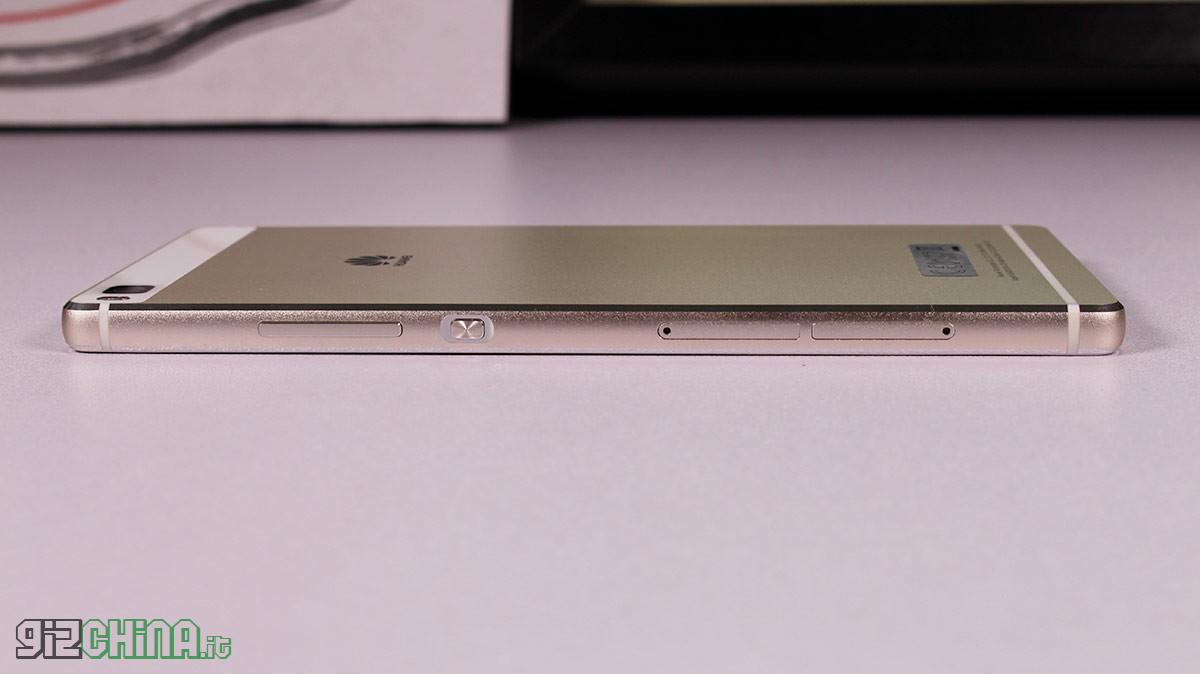 Later there is the 13 mega-pixel camera, the double LED flash and the Huawei logo. 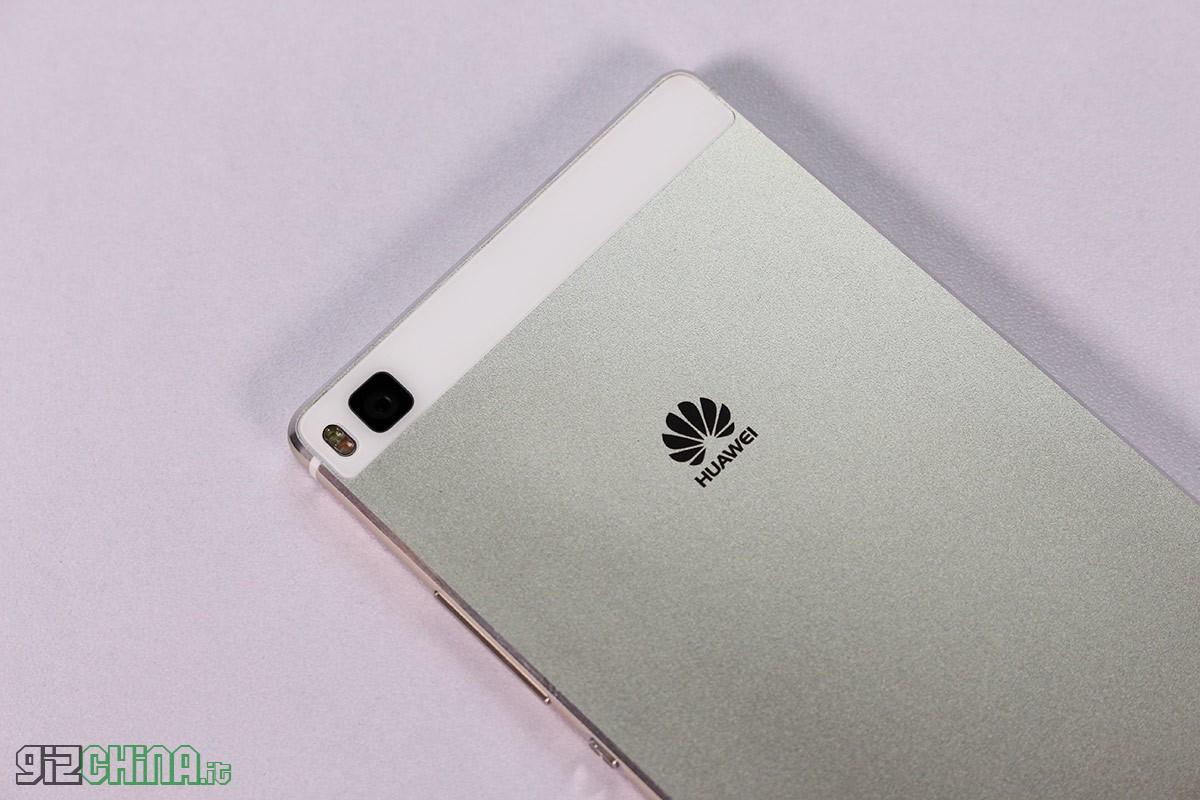 On the upper side there is the 3.5 mm jack for earphones and the second microphone for the reduction of ambient noise. 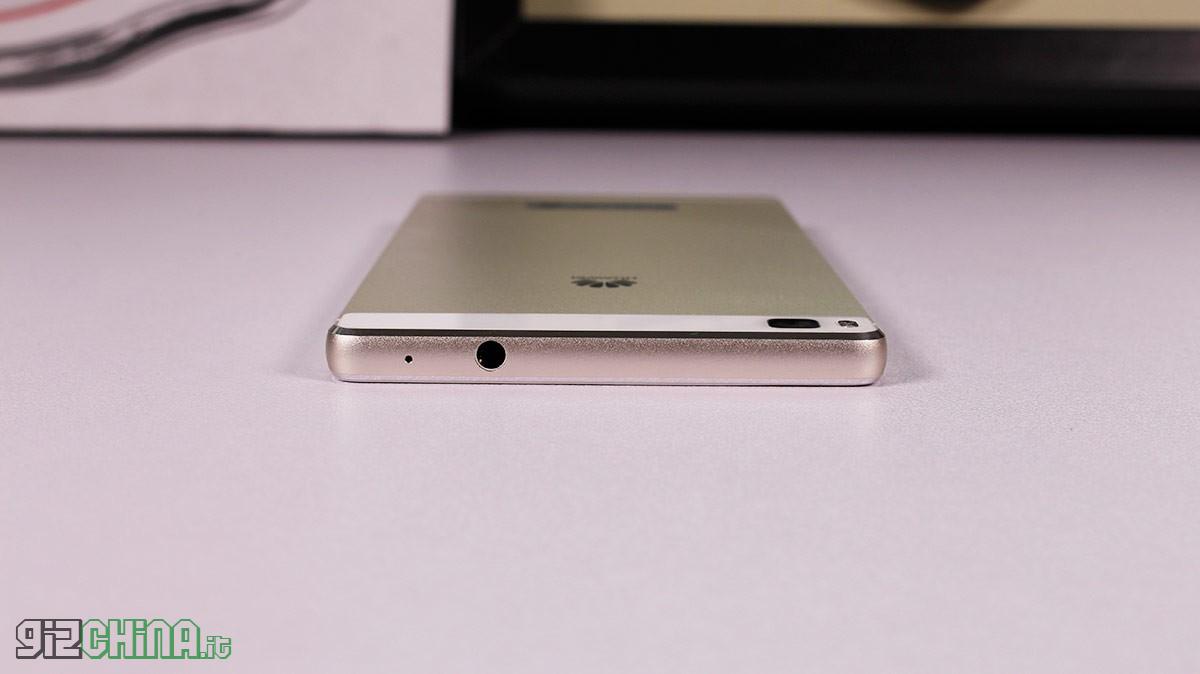 Below is the micro USB slot (USB MTP, OTG), the grille of the system speaker and that of the main microphone. 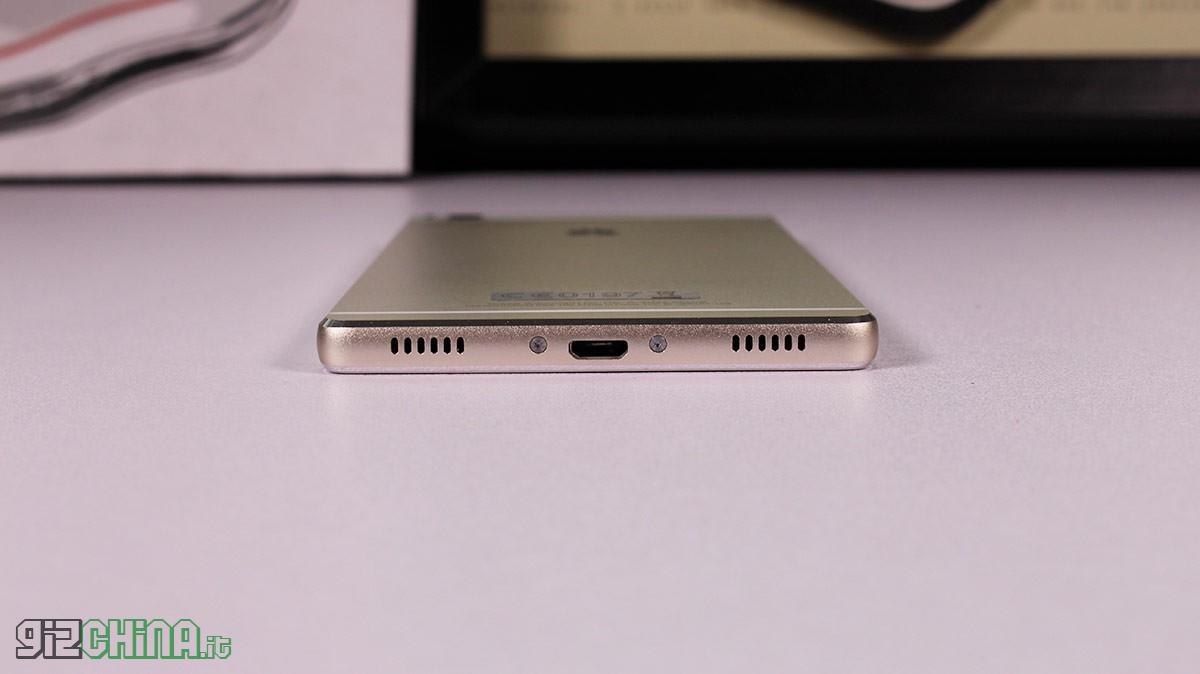 On the front, in addition to the 5-inch FullHD display, we find the 8 mega-pixel camera, the ear capsule, the brightness and proximity sensors and a small notification LED on the upper left corner. On the "chin" of the device we do not find the classic soft touch buttons as they are on the screen. 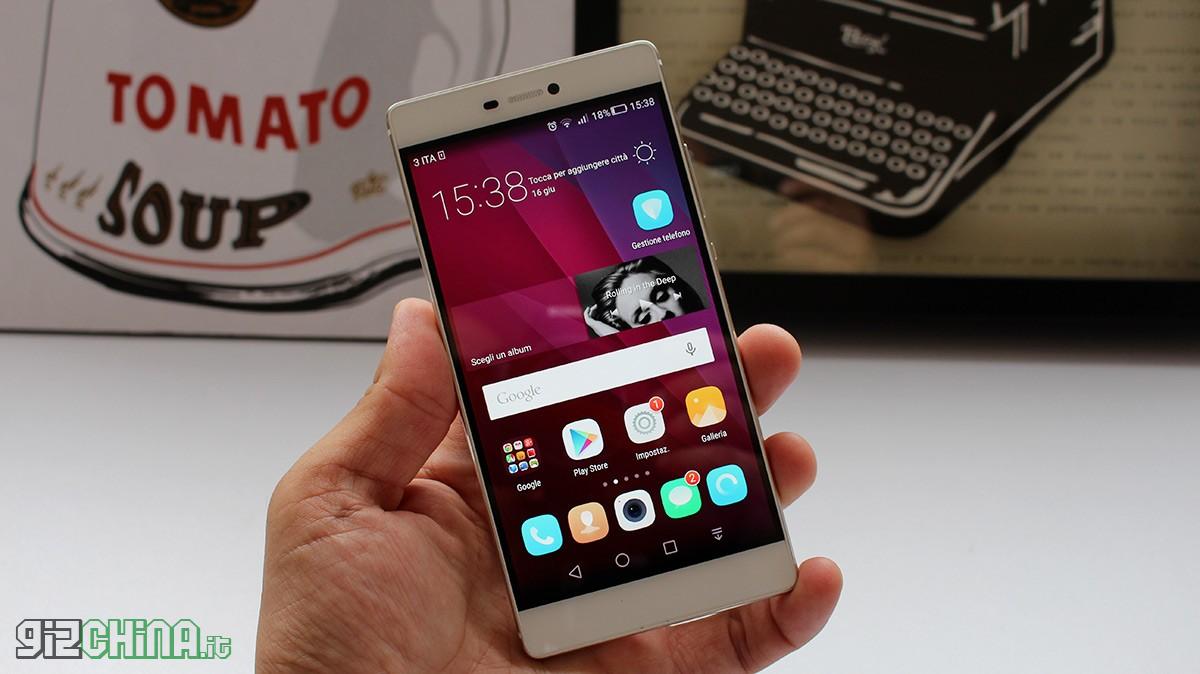 The Huawei P8 is equipped with FULLHD inch 5.2 display with resolution 1920 1080 pixels x, which translates into a density per inch of 424 PPI. 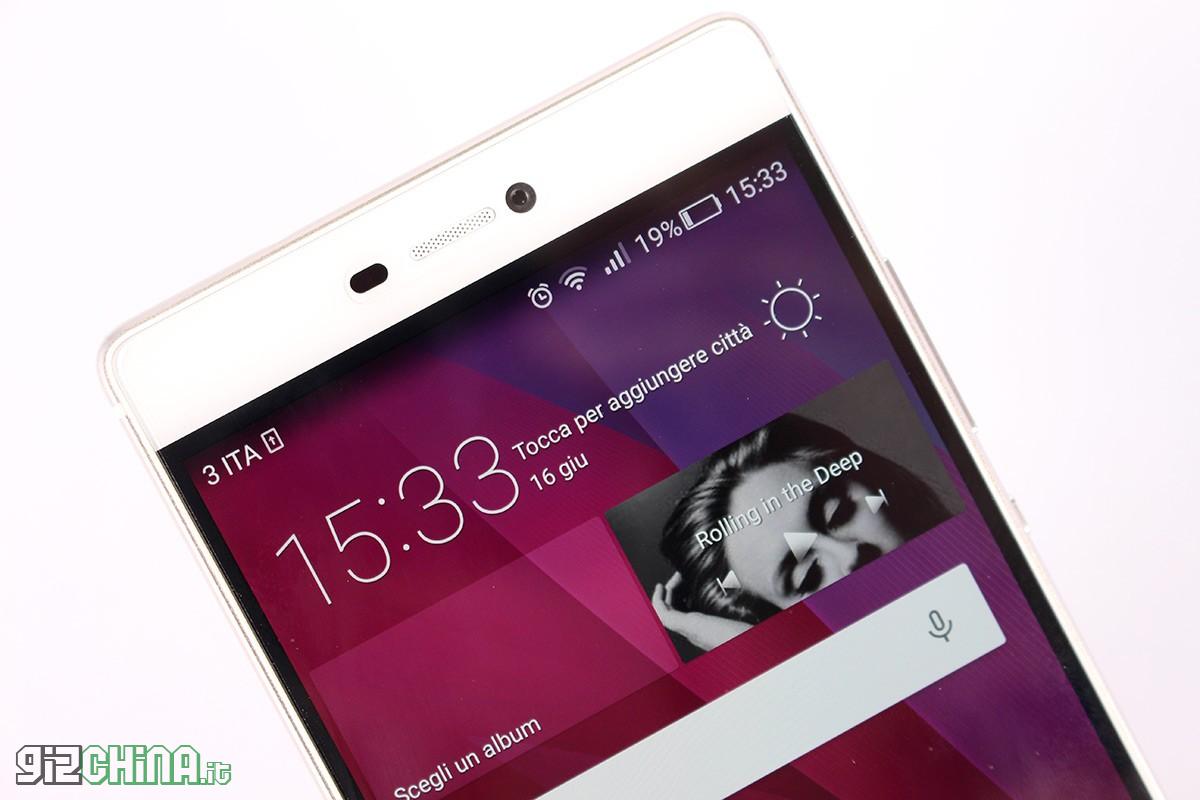 The panel installed on the device is very sharp and defined, as well as characterized by excellent color reproduction across the entire color range. A little color change (classic from IPS) can be detected in the angled view, even if compared to many other panels of this "type" that of the P8 showed a much deeper black. 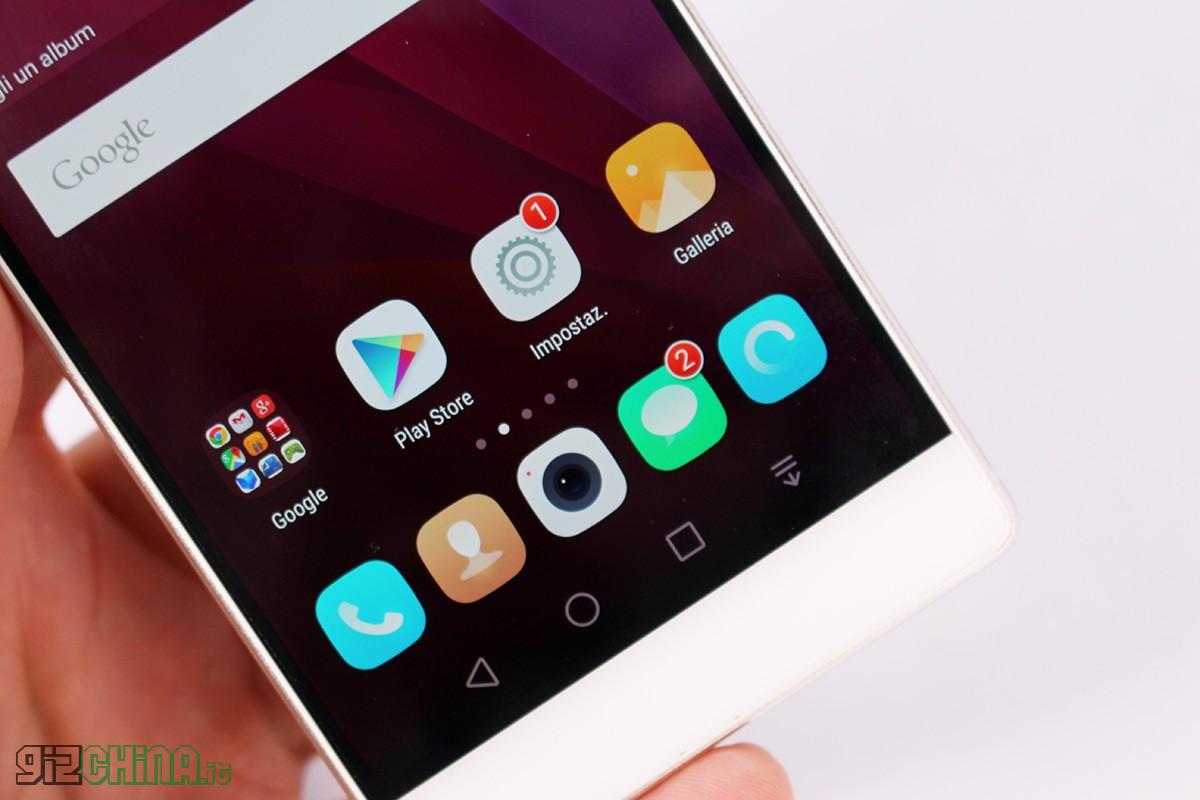 As already seen in other reviews of devices equipped with Emotion UI, even on the P8 it will be possible, through the dedicated menu in the display settings, to manually change the color temperature. 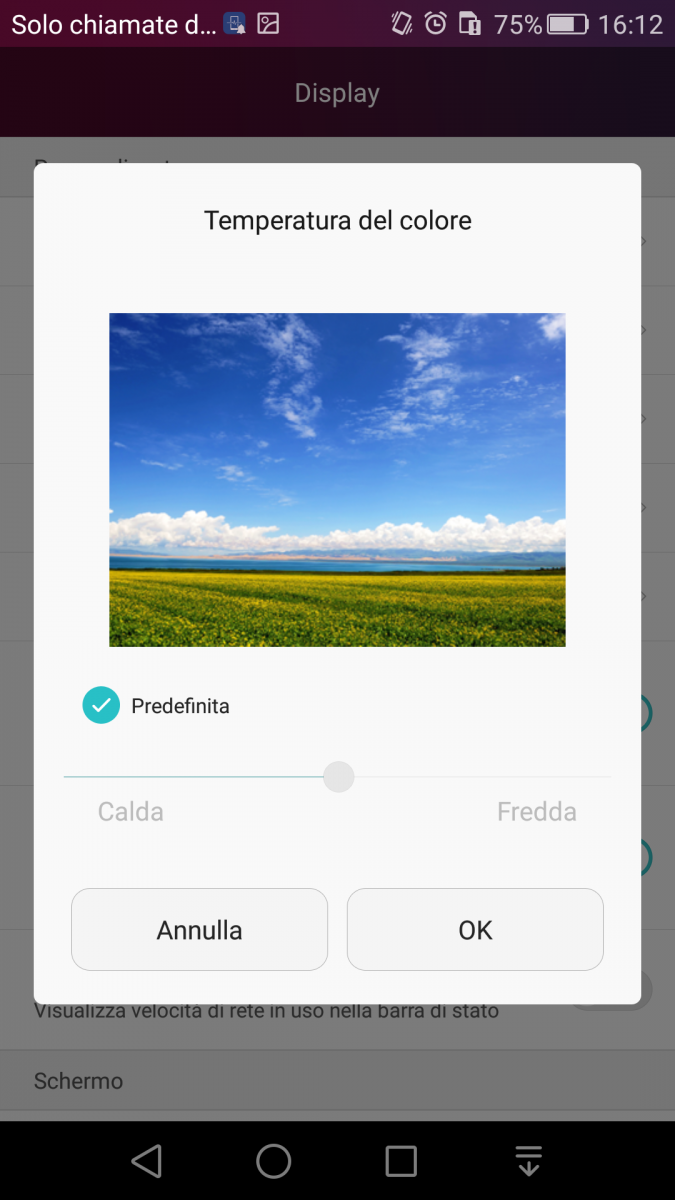 Good brightness level, as well as the sensor that perfectly manages the light changes.

The display is protected by a Corning Gorilla Glass 3, on which an excellent oleophobic treatment has been performed and in fact during use the fingerprints will be hardly retained.

On the Huawei P8 we find the new version of ROM "made in Huawei" that we have come to know and appreciate during these months. The Emoion UI, in fact, is installed on the device in the 3.1 version and, as always, is characterized by the offer of many interesting features.

In the video review it will be possible to observe a quick overview of the main functions of the ROM.

Below you will find a video test of an Antutu benchmark running on the Huawei P8 and some screenshots of the other benchmarks tested on the device. The results are almost always in line with the hardware specifications of the device.

Here are all the other scores obtained by the Huawei P8 in the various benchmark tests:

The Huawei P8 is equipped with a Mali-T624 GPU, which, in these days of testing, has shown excellent performance.

In our, now classic, test carried out with Real Racing 3 the device reproduced the details to the maximum (including the reflection in the rear-view mirrors). Furthermore, during the various gaming sessions, the fluidity and, in general, the gaming experience turned out to be excellent.

Temperatures have always remained below alarm levels, with a maximum peak of 39 degrees in the back.

As already pointed out previously, this sample of the P8 is not equipped with dual SIM support, as the version with double card is not (at least officially) intended for our country.

The reception of the device, both in 3G and 4G - where present - was excellent. This does not surprise us as Huawei is one of the world's leading companies in research and development in the field of networks and it is especially so with regard to 4G and future fast networks (see 5G).

In calls with active hands-free speaker, the audio reproduced by the system speaker is very loud and clean and is also excellent in the earpiece and headphones.

And here we are at what, given the excellent performance of the device in the connectivity sector, will be the shortest section of this review. On the P8, in fact, WiFi, Bluetooth (in version 4.1) and GPS work perfectly.

The Huawei P8 is equipped with a top-of-the-range photographic compartment, consisting of a rear camera from 13 mega-pixels, with dual dual tone LED flash and optical image stabilization (OIS) and a front 8.

The latter is a camera of poco above average, which flaws in particular in the shots taken in low light conditions, as the same show a little photographic noise. Good optimization of some features for the improvement of selfies (beauty mode).

Even the rear camera showed contrasting performances and, in particular, "directly proportional" to the level of light present in the shooting scene.

In good light conditions, in fact, the shots are sharp and defined, while with less light a certain level of photographic noise is visible. However, the shots "at night" are still above average.

Here are some shots:

In general, therefore, what the P8 is equipped with is a good photographic sector, even if, in my opinion, the same is "downsized" compared to initial expectations.

Here you will find a complete photo gallery of the shots made with the Huawei P8.

Video recording was also of a good standard, with the ability to record movies with maximum resolution up to 1080p. The only defect detected is the difficulty of the autofocus to “do its job correctly” in situations where the subject / object is very close to the lens.

The Kirin 930 installed on the Huawei P8 does not support video playback in 4K with H.264 codec (tested with both stock player and VLC). No problem, however, with our other test file, or theMKV to 1080p, played by the device in a very fluid, with very high bitrate and excellent sound.

The Huawei P8 is equipped with a battery (not removable) from 2680mAh which is characterized by an autonomy in the average. In these days of testing, in fact, the best result obtained with the device is expected on 3 hours and a half of screen lit..

As is well known, the Emotion UI offers a series of interesting energy saving management features - such as, for example, the “fine” monitoring of intensive consumption apps - thanks to which it will be possible to obtain better results than the one previously reported.

P8 or not P8? That is the question! It is necessary to close this review with a little more in-depth reflection on the device. The Huawei P8 is definitely a top of the range with all the credentials, which has nothing to envy to the competitors currently on the market (including the various Samsung, Apple & Co.).

The build quality is 10 and the ROM optimization is also excellent. It will be necessary to understand if, as has already happened with previous devices from the company, subsequent updates will improve the performance of the battery.

The price is not as aggressive as it was last year that of Huawei P7 (which we have proposed our exclusive review of the dual SIM version), even if we must say that between the two, abysmal differences in terms of performance, build quality, etc. are immediately perceptible, certainly such as to justify the increase in the initial evaluation.

In conclusion, therefore, the Huawei P8 is still promoted. The device, in fact, represents a further step forward for the company in the path that is leading it towards the consecration among the world's top brands.

Il Huawei P8 is available for purchase on Amazon.it with shipping directly from Italy.