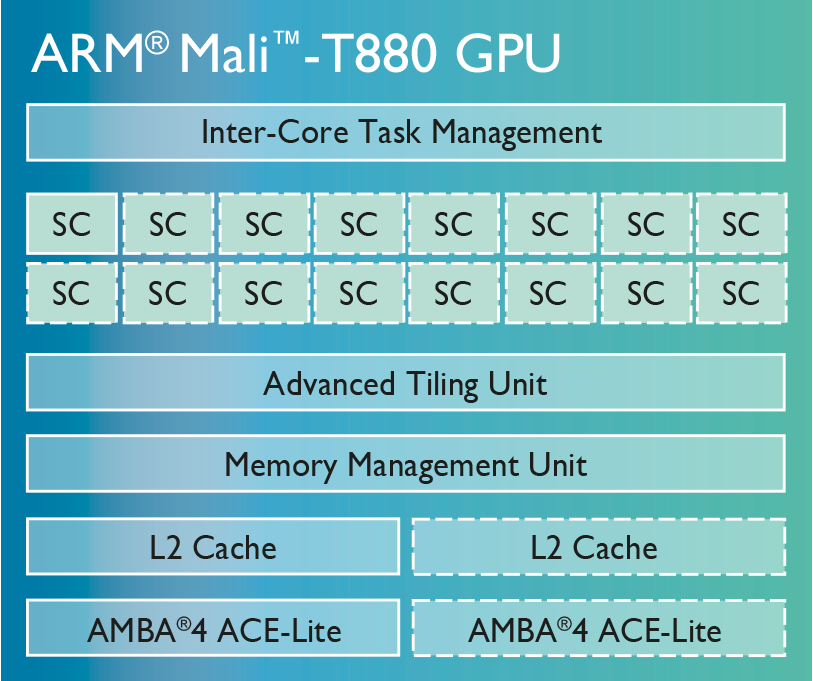 The most demanding gamers will be happy to know that ARM, together with Cortex-A72 and CoreLink CCI-500 of which we have already talked to you, also announced Mali-T880. This is a GPU dedicated to the high end of the mobile market, spearhead of a series already composed of excellent ones T860, T830 and T820.

As usual, ARM did not immediately disclose all the details of this solution, but limited itself to declaring perfomance equal to 1.8 times higher those of Mali-T760 with the same energy budget and lower consumption of the 40% with equal work performed. This data should refer to a GPU in the maximum configuration from 16 core (MP16), produced with technology 16nm FinFET and operating at a frequency of 850 MHz. 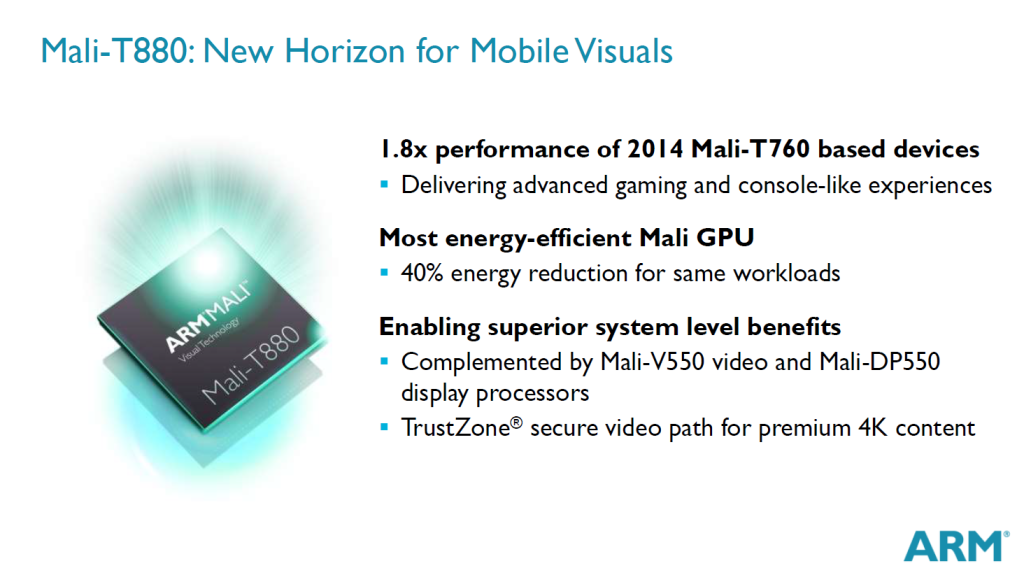 Some interesting information, however, we can extrapolate from the use of the already known Mali-V550 and Mali-DP550 co-processors. These elements were introduced together with the younger brothers of this GPU, so we know their characteristics well.

The first, for example, is a multicore video processor compatible with many standards, among which we remember the new one  HEVC / H.265. Designed with flexibility, Mali-V550 it can operate on multiple video streams simultaneously, both in decoding and in encode mode. A single core, according to the British company, is enough to manage a movie 1080p to 60fps (or two at 30fps), while the most powerful configuration comes in at 4K with 120fps (or 1080p to 480fps) thanks to a maximum of eight core.

Furthermore, the presence of technology should be noted Motion Search Elimination which should guarantee greater efficiency in the use of bandwidth and a qualitatively satisfying experience with wireless display (via Miracast, for example). 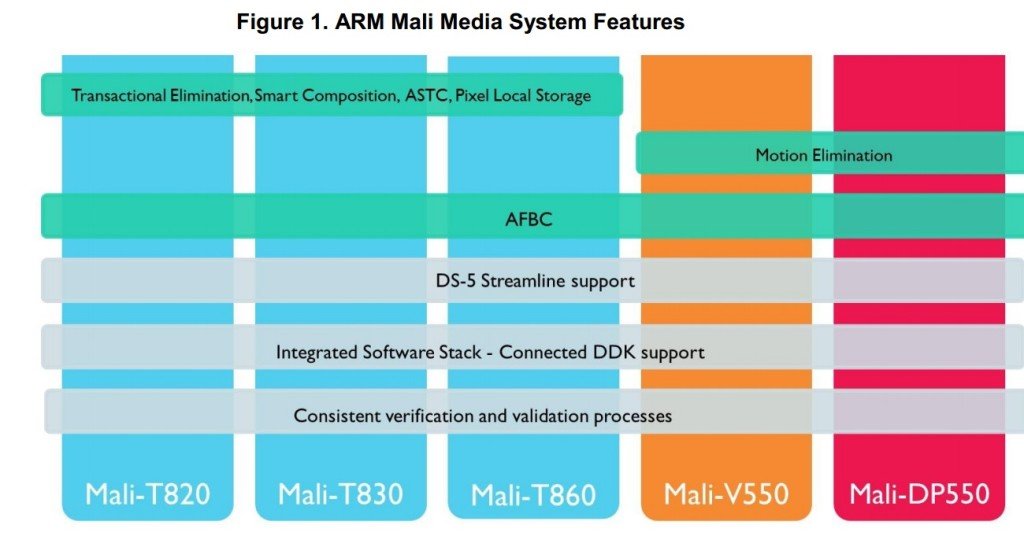 Let's move on to now Mali-DP550, display processor including a composition engine from 7 layers, a new interface for co-processors and support for most YUV and RGB formats. In this regard, compatibility with. Is interesting YUV to 10-bit also for the screens 4K, which should guarantee a truly remarkable quality.

This circuit (which deals with compositions, scaling, rotations and postprocessing in general) has the dual display mode and the possibility of increasing its flexibility thanks to dedicated co-processors. 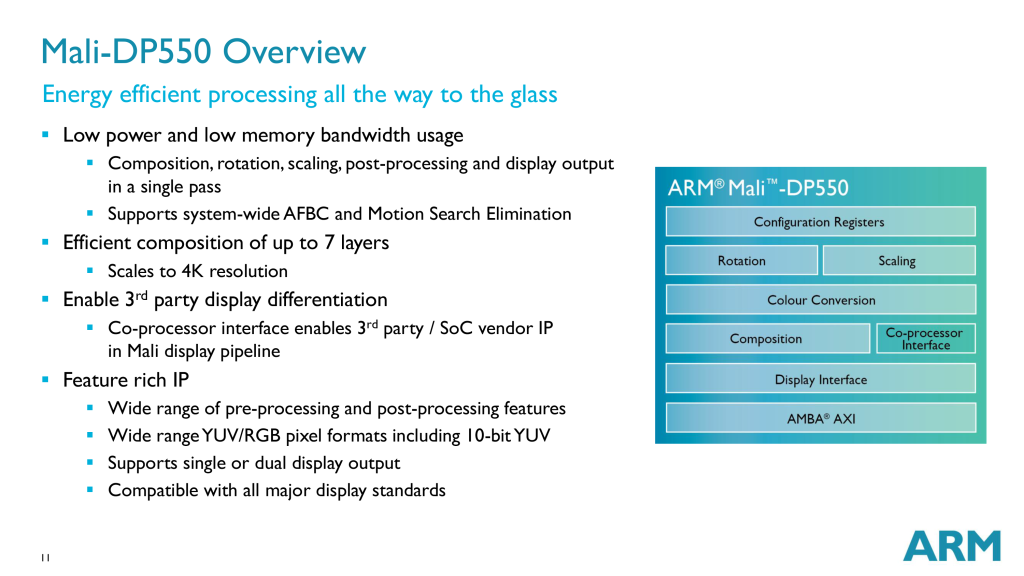 As you will have understood from this brief overview the Mali platform is ready, in perspective, for the full management of 4K. Therefore, as early as next year, we could see the first terminals capable of recording videos and reproducing films in this resolution.

One of the technologies that the new Mali-T880 will certainly support, from this point of view, is ARM Frame Buffer Compression, which allows the exchange of large amounts of information with reduced bandwidth use thanks to loseless compression. AFBC, according to the company, allows on average a bandwidth savings of 50% with 80% peaks.

In addition to this interesting feature, which is transversal to the whole Mali family, the use in Mali-T880 of Forward Pixel Kill. FPK serves to reduce GPU usage by blocking unnecessary calculations, especially those concerning pixels destined to be immediately overwritten. We also expect that all the other innovations introduced with the smaller brothers of the 800 series, such as Smart Composition, Adaptive Scalable Texture Compression and Shader Pixel Local Storage, will not be missing.

The first technology of those listed deals, once again, with avoiding unnecessary computations and reducing memory demands. Smart Compositionin fact, it selects the hidden and static regions of the image and forces the GPU to ignore them. ARM declares that it is possible to save up to 90% of bandwidth with Chrome, while with the social apps the gain is in the band 70% -80%. 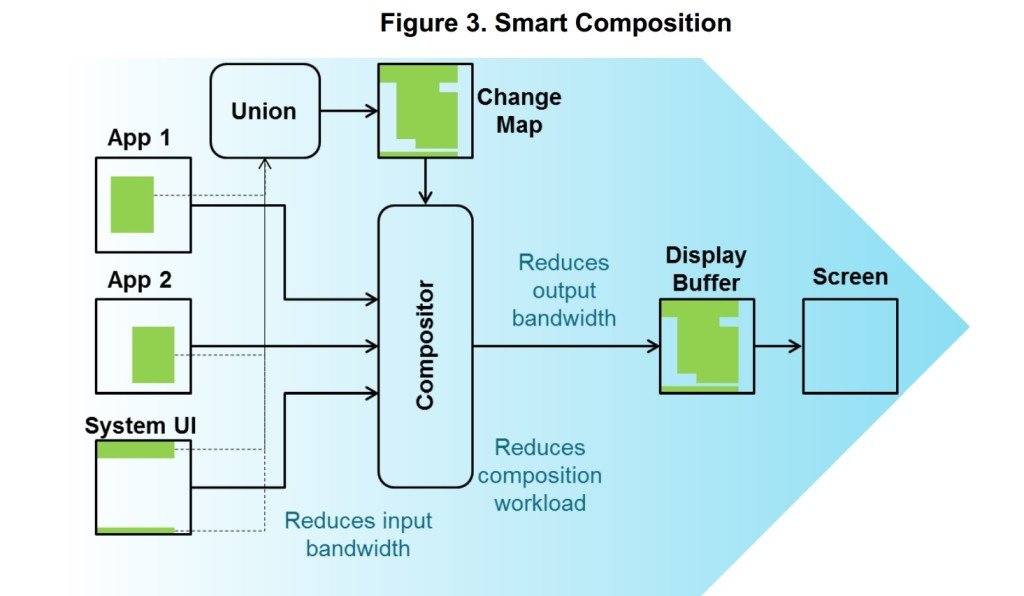 The other two technologies mentioned, however, are optional extensions of OpenGL which, being open, can also be freely implemented by other GPU manufacturers. Adaptive Scalable Texture Compression allows, by compressing the textures, to obtain better-looking games with the same memory band used. Pixel Shader Local Storageinstead, it is new to OpenGL 3.0 and increases the flexibility with which the graphics processor can read and write data. In practice, this allows to keep a greater quantity of information directly on the chip, reducing the bandwidth request.

The features listed so far are actually common to the whole Mali-T8xx family. We expect the newly presented GPU to have some exclusive features as well, but for the moment only version support has emerged DirectX® 11 FL11_2. Thanks to the ARM website we also discover that, to improve the theoretical power of Mali-T880, the English company has opted for an increase in the number of ALUs within each single core, from 2 of the younger brother T860 to 3 of the new GPU .

Unfortunately, the response of real performances to an increase in theoretical calculation capacity is not linear at all. The multiplication of ALUs, in fact, usually negatively affects the utilization rate of the latter and increases the space on silicon necessary for the control units, which are often quite energy-intensive. We will therefore have to wait for the first real chips to have a reliable index of the gaming performance of this GPU which, on paper, has a power not too far from that of modern consoles.

Finally, it is evident that ARM has introduced most of these technologies thinking about 4K resolution and the challenges that this entails. Consequently, 2016 could be the year of the first UltraHD mobile terminals, although chipmakers will probably prefer to remain conservative by limiting the power of SoCs to what is necessary for a great 2K experience.