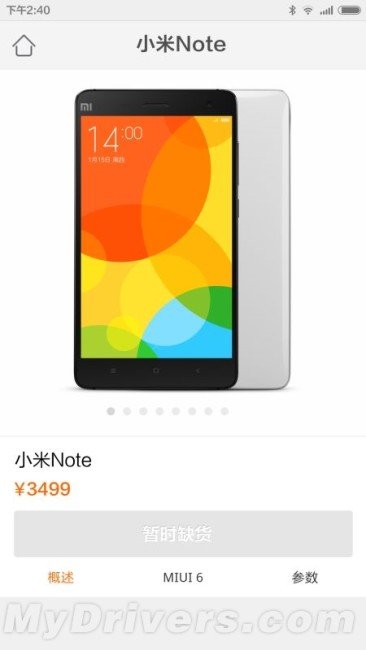 After fixing the clock for the launch event Xiaomi the day after tomorrow, we continue to bring you back in real time all the news that emerge from the intricacies of the network about the next flagship phone of the Pekingese house. This time it is the turn of the Xiaomi Notes, terminal from the exposed price that leaves at least some perplexity.

This night, an alleged screenshot of the official Xiaomi store has appeared on the web, in which a mysterious terminal looks similar to that of the current Xiaomi Mi4, but with significantly larger dimensions. As you can appreciate, the device would have the name of Xiaomi Note and would be characterized by soft lines and a panda-effect design (black on the front and white on the back) - an element that makes us assume that, if it is true as it seems Xiaomi could present an unspecified successor to the Xiaomi Redmi Note, this too, like the Redmi 2, would go to to steal some details at Mi4 (design of the capacitive keys, more optimized profile)

The thing that most incredulous would rather let the price: 3499 yuan, or about 479 euro at current exchange rates, we seem far-fetched, although we learned that the device will probably rely on the camera with optical image stabilization, audio Hi- Fi, use of glass, etc. etc.