Each quarter, the sales data obtained by each manufacturer belonging to the mobile sector are analyzed. These data show the evolution, changes and trends to which the market is subjected.

IDC (International Data Corporation) is the American company that carries out these market analyzes and has, from poco, published the results referring to Q4 of 2014. 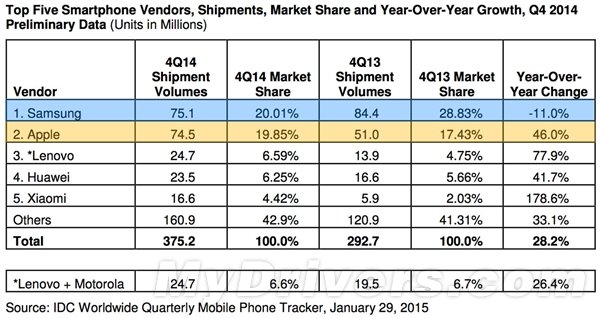 As we can see from the ranking, Samsung is the manufacturer with the highest sales percentage found in the Q4 2014, ahead of Apple and Lenovo (Lenovo sales are calculated as the sum of Lenovo + Motorola).

To close the Top Five we find Huawei and Xiaomi. Such data is rather explanatory of the slice of the market that are increasingly obtaining the Chinese smartphone brands.