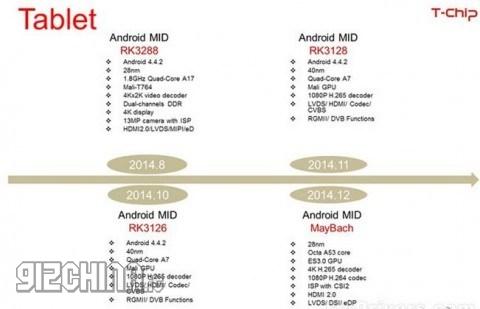 RockChip invaded the Chinese tablet market last year, a market that until then was essentially controlled by compatriot Allwinner. When RockChip arrived on the scene this year with its RK3288, Allwinner in response presented its innovative Allwinner A80T… had RockChip leadership already been compromised?

Fortunately (for RockChip), all this has not happened since the new Allwinner socket would seem to suffer from faulty drivers, performance problems and compatibility, which our Mario is worrying about testing in the V989 Wave test. The result was an even greater use of RockChip's Rk3288 than the A80T.

A chipset that is allowing the Chinese company to keep the throne; a company that does not intend to stop here. In the launch pad there would be 3 new processors, including one for high-end devices called RockChip MayBach. This would be characterized by 64-bit architecture with 8-core Cortex A53 (just to give a little 'annoyance to the MediaTek and Qualcomm chips), support for the OpenGL ES 3.0 and also for video recording in 4K.

The other two novelties are instead destined to mid-range and entry-level bands, quad-core processors characterized by the use of Cortex A7 cores named RK3126 and RK3128, coming out in October and November respectively.

It seems, therefore, that the approach to Christmas will bring us many new Chinese tablets with presumably more and more satisfying performances. And we, of course, can not wait for these to arrive on the market!