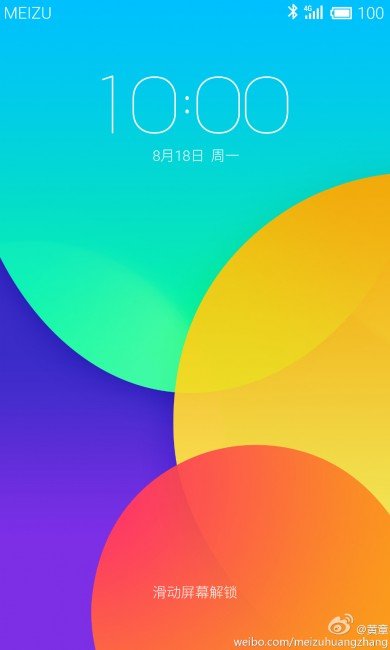 Jack Wong, founder and CEO of Meizu, has published the lock-screen image of the new Flyme 4.0 in his weibo account, promising also great surprises for Monday 18 August.

Published originally on weibo and then re-proposed by the Meizu team on the official facebook page, the screenshots show the Flyme lock-screen of the next generation. The important details we can gather from these images are obviously flat, flat and no-frills design, and the presence of 4G LTE connectivity support.

Details distributed randomly almost simultaneously with the Pekingese presentation of the new MIUI V6. That said, however, it should be noted that beyond the leaked screenshots, the news of the day, at least for Meizu, is the promise to see great surprises this Monday. We do not really know if it will be something inherent to Flyme or MX4, but we hope that substantial information will be revealed.

It did not end here because, in addition to the images posted by the CEO Wong, others have emerged that clearly show the 4G LTE toggle and a completely revisited icon pack. According to the image information in its original size, the display of the Meizu MX4 could be (further confirmation!) A 2K Quad-HD panel with screen ratio to 15: 9.

The expectations for the upcoming Meizu devices are high, very high. After the devices signed Oppo, OnePlus, ZTE Nubia and finally Xiaomi, all the eyes of the hi-tech papssioni are focused on the company of Wong. The massive investments received in the last period then, if from a high they are configured as a strong lever to expand their activity in a time frame obviously inferior, on the other they appear as a sort of stress test to the company itself to the eyes of investors who have decided to allocate their resources in this small asset.

What do you think Meizu has in store? It will be something exciting or rather it will turn out to be something beautiful but very traditional?