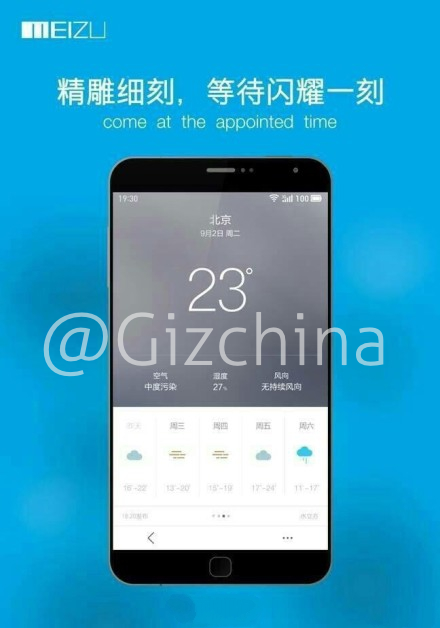 A simple screenshot published by Meizu CEO Jack Wong may not even look like the hottest news, but just inspect the posted element a little deeper to get further rumors about the future MX4.

Contrary to what is done by companies such as Oppo, OnePlus etc. that tend to shake the water and increase the hype among fans with teasers and so on, Meizu has shown a rather discreet and silent company in the process of approaching the launch of the new flagship, rumors and speculations around in fact are very often the result of word of mouth among the fans. Every now and then some ideas to direct the shooting is and comes nothing less than the staff of Meizu ... In the day yesterday, for example, the CEO Jack Wong posted on his profile weibo the following image. An innocent image that, if analyzed, turns into a source of confirmation for our conjectures.

The first clue is obviously the 4G in the right upper right hand side by side of the battery bar. The second and most important clue comes from the analysis of the image information itself: as you can see from the 1 ° of the two images below, the indicated resolution would be 2K Quad-HD 2560 x 1536. The presumed screen ratio to 15: 9 is no less important.

Furthermore, as the most attentive of you will have noticed, the device used by Wong seems to run the Flyme 4.0, whose very first images were leaked no later than yesterday. 2K resolution screenshot, 4G LTE connectivity, 15: 9 screen ratio and Flyme 4.0… do we need any more clues? Let's just hope that the launch and above all the commercialization are not too delayed!