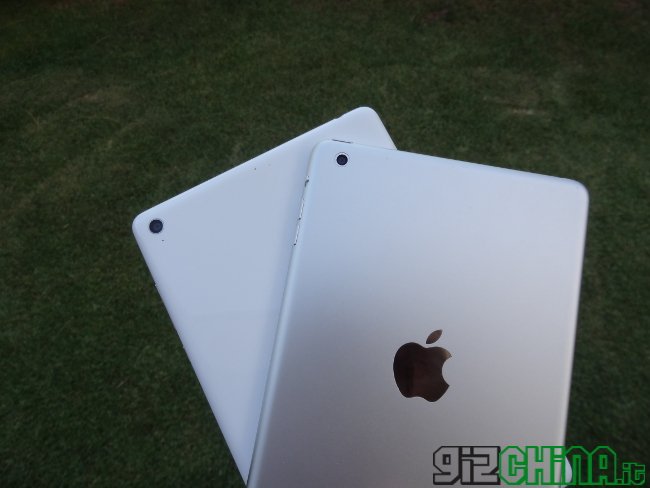 Since the arrival of the first images of the Xiaomi Mi Pad, the product has always been matched to Apple's iPad Mini, due to a similar design and some common features. In this comparison we will see through some photographs similarities and differences between the two tablets. 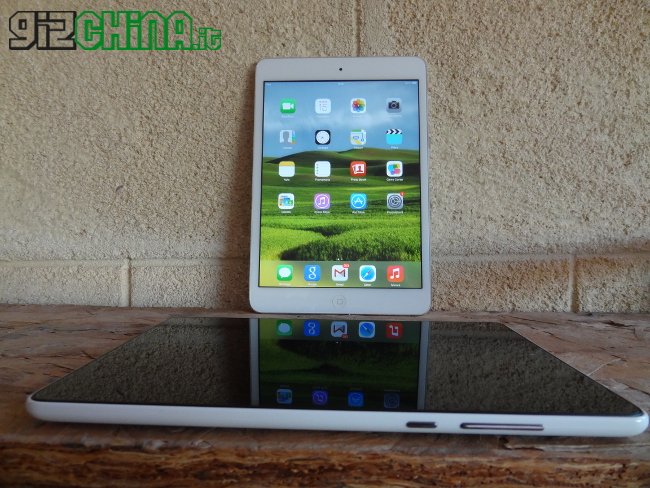 If the dimensional differences seem minimal on paper, they become almost imperceptible in reality. Put close, especially to one eye poco trained, they may look like the same object. If the iPad Mini in this comparison photo had been the black model, in certain photos you would have had to concentrate to distinguish them, especially when the three navigation keys are not illuminated.

As we have already said, the display size is identical, 7.9 inches in both cases, but the frames surrounding the two displays are very similar, with the Xiaomi Mi Pad just longer (a couple of millimeters). 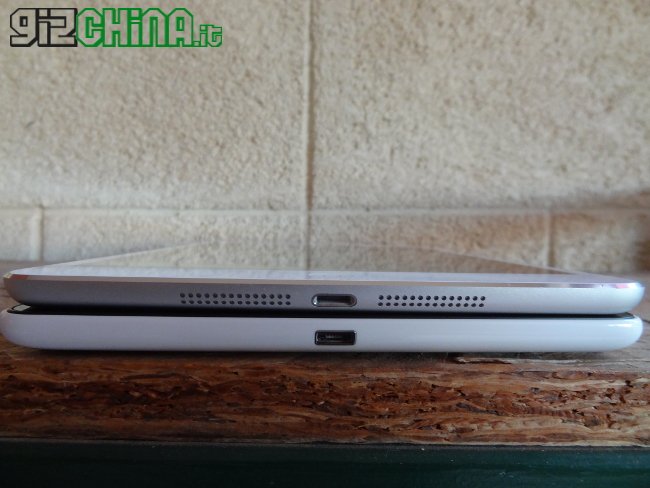 In both cases the lower part of the two devices has well rounded corners, with the connector for charging / connection to the PC placed in the center for both. Both the entrances for the relative cables are surrounded by metal frames, however, it can be found in products of many companies. On the lower side of the iPad Mini are also the system speakers, placed instead on the back for the iPad Mini. 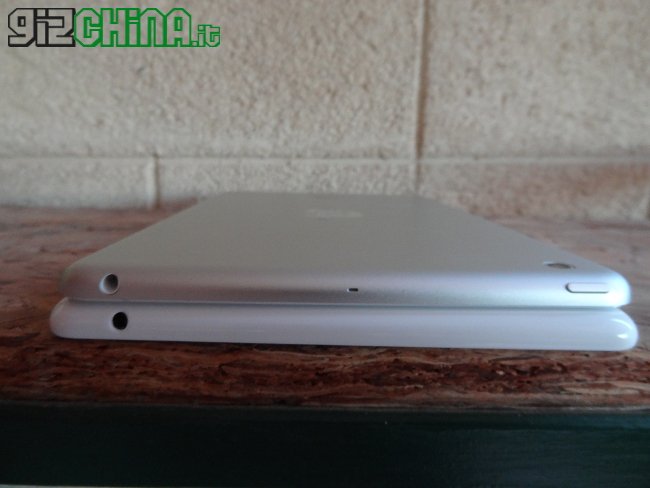 The upper side of the two tablets is very similar. Also in this case we find rounded corners for both, but also the same position of the headphone jack from 3.5mm. The iPad Mini has on its side the power / lock button, instead placed on the right side for the Xiaomi Mi Pad. 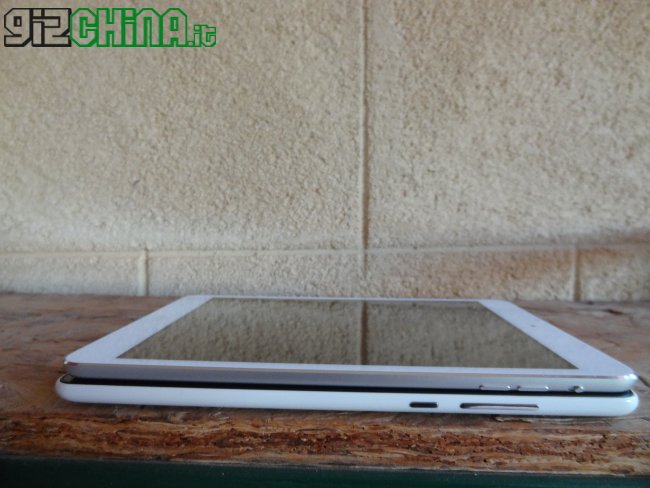 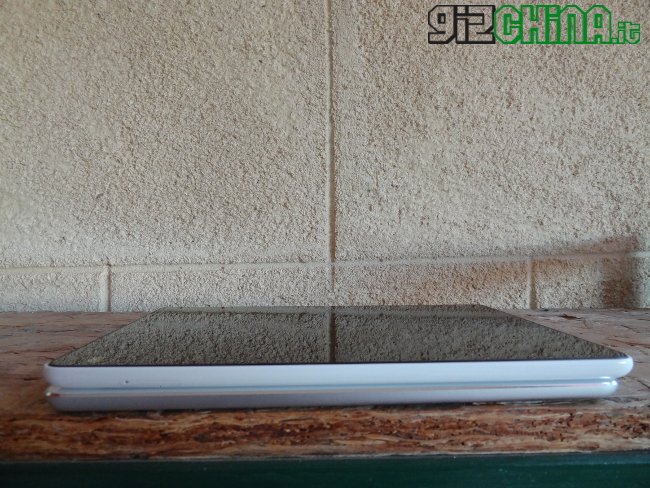 On the left side of the iPad Mini we do not find any input or button, while for the Xiaomi Mi Pad we find the hole to extract the tray that houses the possible Micro SD card, which allows the expansion of the memory. 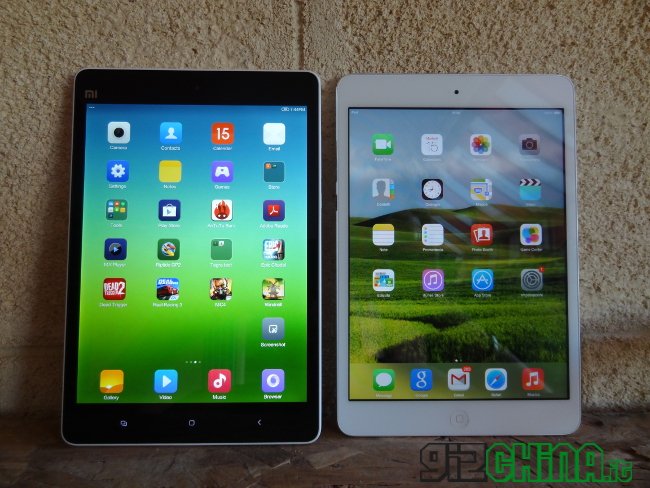 Looking at the two tablets on their front, we notice several similarities. The front camera is in the same position, the bezels are similar, as are the corners. The iPad Mini is surrounded by a frame that highlights more the detachment with the back. A difference between the two tablets on the front is the presence of the "Mi" logo in the Xiaomi Mi Pad. 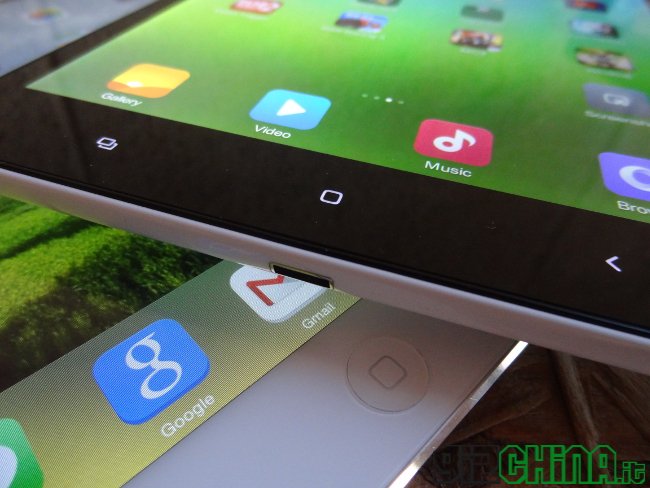 The lower part of the front side of the two tablets, commonly called chin, is very different, but simply because they are two devices belonging to different software platforms. The Xiaomi Mi pad houses in its chin the three classic Android navigation keys, one to return to the home screen, one to go back and one for multitasking, all three well backlit white. The iPad Mini, on the other hand, houses a single key in its chin, as per Apple's tradition. 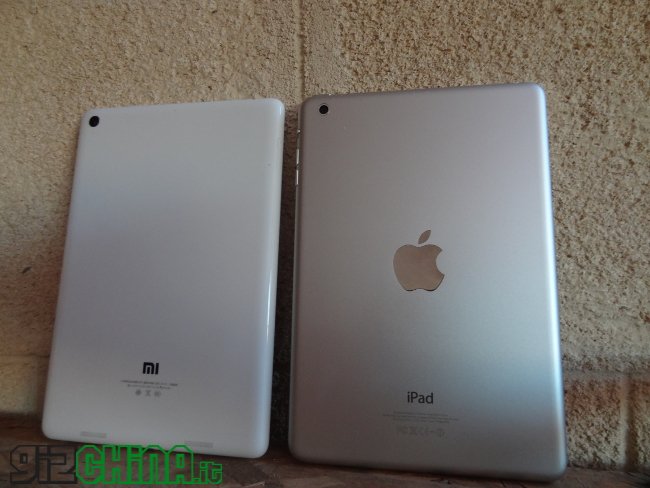 The back of the two devices again presents many similarities. The rear camera is placed in the same place, the respective "Mi" and "iPad" logos are placed almost in the same place, as well as the inscriptions below. Obviously the logo and that type of writing are in that position on many smartphones and tablets, but it is still a common element. The two differences on the back of the devices are the presence of the classic apple bitten on the iPad and the positioning of the system speakers. The back of the two tablets is therefore really very similar, almost identical from the dimensional point of view. 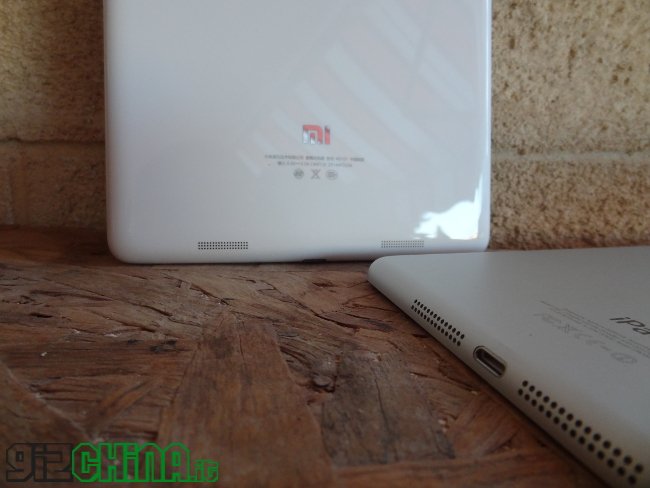 The speakers are, as we have already seen, placed in a different position. The iPad Mini houses its speakers on the underside, covered by two fairly wide grids, while the Xiaomi Mi Pad speakers are placed on the back of the device, covered with shorter grilles but with three rows of holes. 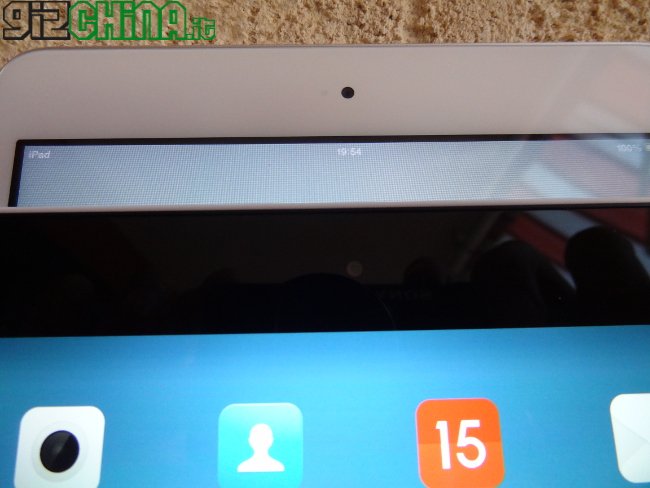 From the picture above you can see the positioning of the front camera in detail, very standard, but still identical between the two. 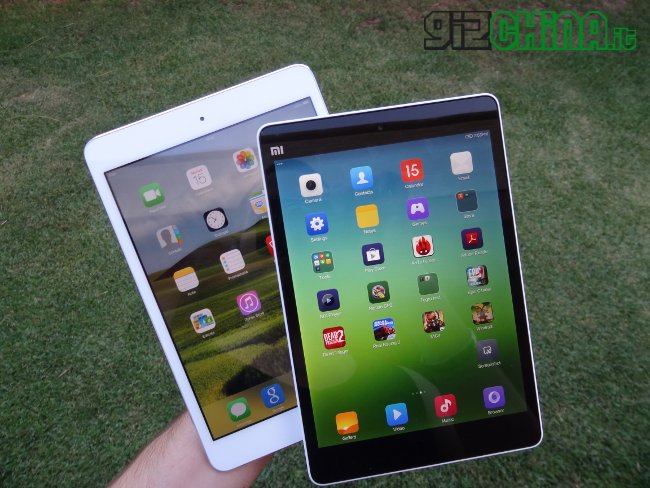 With almost identical dimensions, the same size of the display and the same aspect ratio, holding the two tablets, as well as using them vertically or horizontally, returns an extremely similar user experience. 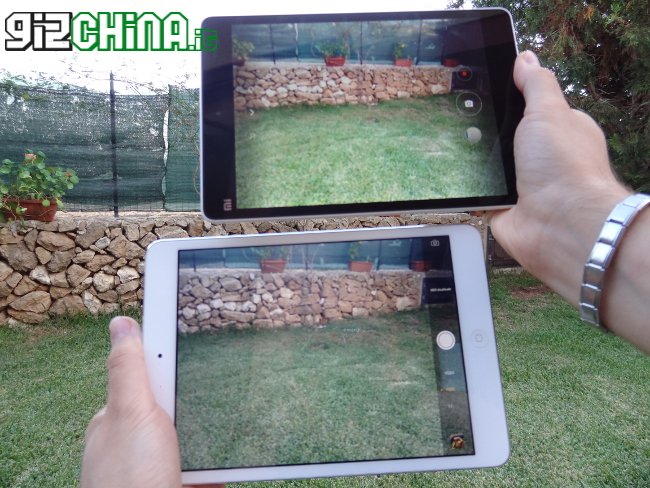 Also in terms of ergonomics and use with both hands, the user experience is practically the same. Those accustomed to using the iPad Mini will find the same sensations in the ergonomics and portability of the Xiaomi Mi Pad. 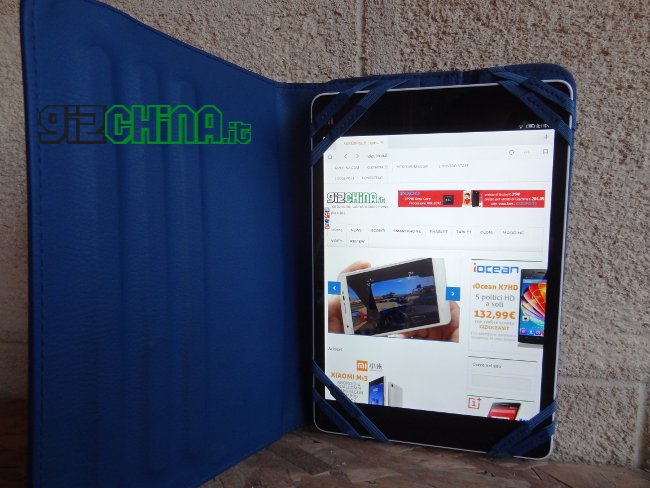 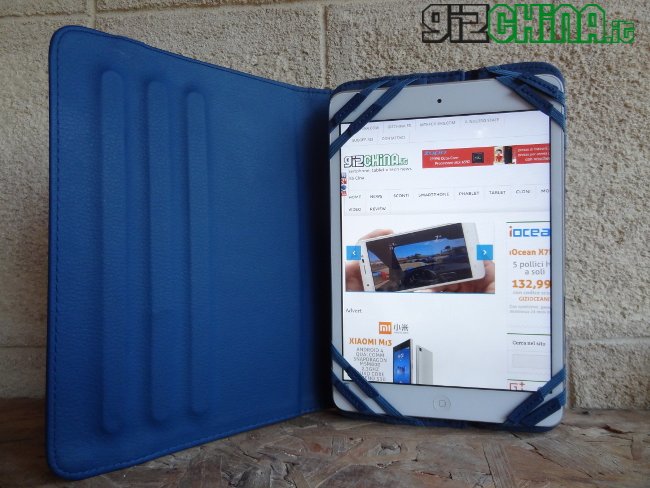 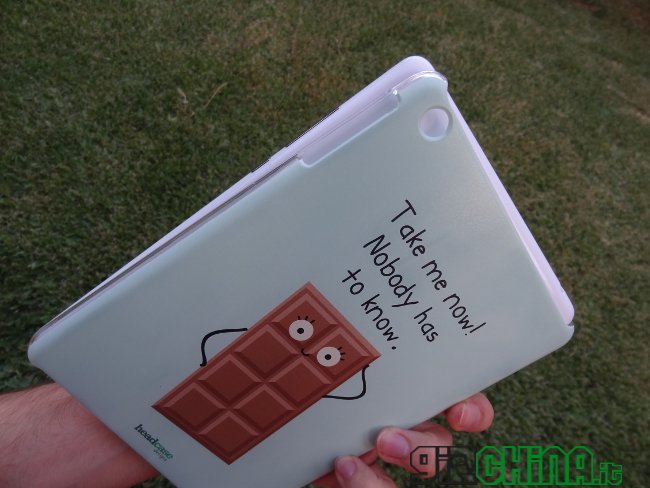 Trying to insert the Xiaomi Mi Pad into a back cover for the iPad Mini, you will notice that the cover does not fit the device, proving that the two devices are dimensionally very similar but not identical. 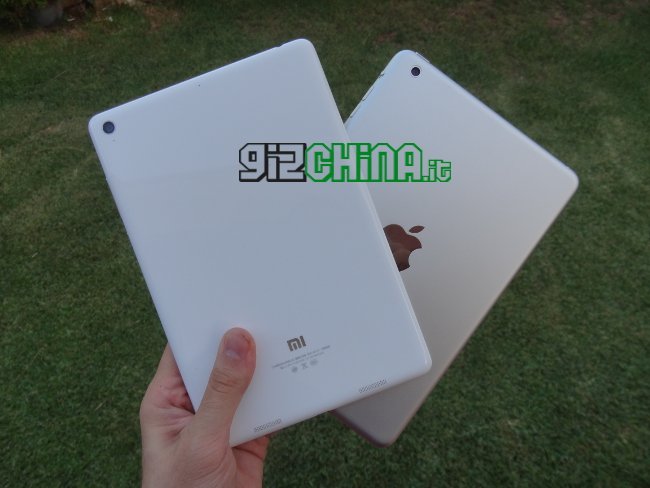 In conclusion we can say that the design and structure of the Xiaomi Mi Pad are inspired by Apple's iPad Mini, and that the similarities between the two devices are multiple and obvious. But we must consider that the design of the iPad Mini is certainly not a revolution, because, in other words, it is a rectangle with rounded corners and, as far as Apple has already tried, the elementary geometric shapes are not patentable ( almost..).

What Xiaomi has drawn more from Apple is the Form Factory of the iPad Mini, which finds in its dimensions an excellent compromise between very large and difficult to carry tablets, and small tablets, which are now close to those of most new smartphones.

Inspiration? Yes. Copy? No. I personally believe that Xiaomi has chosen her own source of inspiration, since the Mi Pad is a really handy and practical device to use.

I remind you that the Xiaomi Mi Pad is available for immediate delivery, with shipping from Italy and 24 months warranty and Italian assistance on Xiaomishop.it, the store that offers all of you readers an exclusive discount available through the voucher GIZXIAOMI.

Ortur autumn sales: Laser Master 3 and other engravers in ...