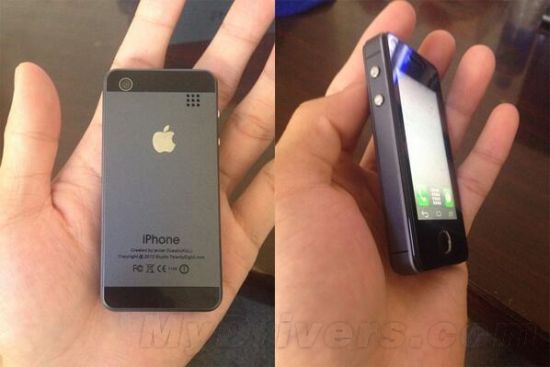 With a iPhone 6 from the larger dimensions (we are talking about two versions, one from 4,7 "and one from 5,5") in the future, Apple could also think of a Mini version of his iPhone? Too late, the usual old people have already thought about it Chinese cloners who have made a restricted version of the flagship phone of the Cupertino company.

It is objectively difficult to classify the current 5S iPhone as "big size", Especially when compared to terminals like the Oppo N1 Mini (compared to which it is much smaller). Given the rumors and the leaked mockups that give the size of 4,7 and 5,5 inches of the 6 generation of the iPhone to be quite certain, is a mini version of the Apple flagship waiting for us in the future?

Well that there will be or not is not important at the moment, also because to realize it seems that we have already thought in China. The dimensions as seen well in the photos are minimal ( it's in the palm of your hand!), the display can barely show 3 icons. The specifications have been revealed, but we believe it is not worth even listing them.

Something similar was already spotted a couple of years ago in the mobile market of Shenzen at a price of about 30 $. But be careful, we do not want to recommend the purchase!

OnePlus 11R check on the web: first details on the specifications