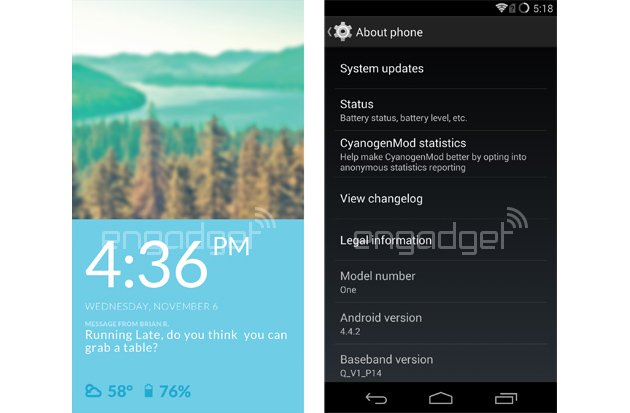 We have not yet seen the OnePlus One, but one thing is certain: the company knows how to advertise its products. OnePlus has been able to create a great interest around the One, slowly revealing some information, but without revealing too much.

The latest rumors about the device speak of the installed software and the unlock screen!

The Engadget colleagues managed to get their hands on some screenshots that should belong to a OnePlus One. As you probably know, OnePlus is a joint venture between the hardware manufacturer team led by Pete Lau and the CyanogenMod Inc. team led by Steve Kondik. This means that the OnePlus One will mount the famous CyanogenMod ROM, probably in the CyanogenMod 11S version, which we believe will be reserved for the One.

Based on Android 4.4.2 KitKat, this version of CyanogenMod for OnePlus One will have a non-traditional lock screen, along with many other changes we expect to see. This new smartphone, with Snapdragon 801 processor, will be released exactly between 23 days, the 23 April, at a price lower than 400 $ (290 euro). With all the anticipations and marketing that the company has built around this smartphone, the launch event will surely attract many people!
Do you like our posts? Follow us on Facebook, Twitter, YouTube and G + not to lose all our updates!