OnePlus he's been waiting, in anxious expectation, for his fans for many months now. In a strategic spread to "episodes" has gradually branched out all the technical specifications of its first device, the OnePlus One.

First the CPU (Qualcomm Snapdragon 800), then the battery (3100 mAh with "Mistery Tech" technology) and then display (5.5 inch Full-HD panel produced by JDI), camera (sensor from 13 mega-pixel Sony IMX214 with 6 lenses and 4K video recording) and finally the StyleSwap back-covers. Evidently Pete Lau & co like the twists, because what they did is really a surprise!

Only a few minutes ago, OnePlus updated the cover image of the Facebook profile. Nothing strange, many companies do it when they have some news to communicate or when they have already presented a new device. The new cover of OnePlus seems in appearance the same as always, with listed all the specifications from the CPU up to the back cover StyleSwap if it were not however that the first line, that of the CPU in fact, has been changed. What do you ask? With a new CPU, which is not the version AB or AC of the Snapdragon 800 ... but rather with its upgrade, with the Snapdragon 801! 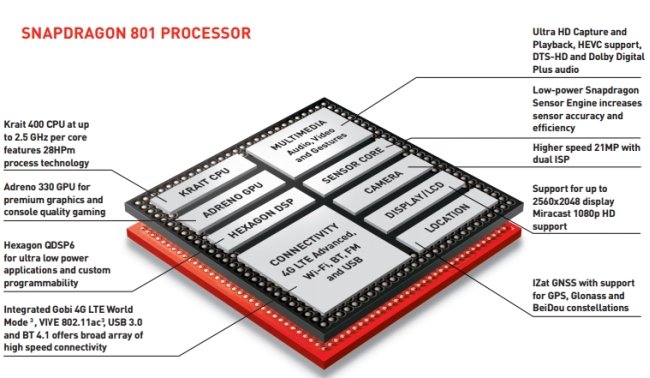 These days the OnePlus forum is becoming very lively, every day new members come together and what was initially an active group is now slowly becoming a real community.

Lately, especially after the spread of the last feature, the most frequent debates concerned design and release date: the image emerged a few days ago about the solar riddle what deciphered should have unveiled the date did not help much ...
The news of the use of the Qualcomm Snapdragon 801 processor is certainly one GREAT NEWS, but at the same time it is probably also an excellent strategy by OnePlus, which up until now had let everyone else understand it.

Will other specifications be called into question? and above all, are you happy with this news? We ABSOLUTELY YES!