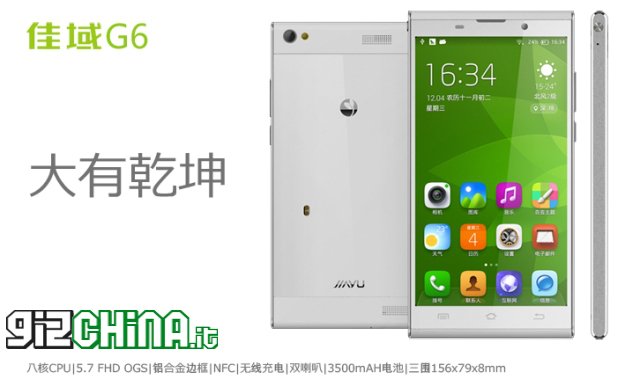 The largest smartphone that JiaYu has ever produced, the JiaYu G6 with 5.7 inch display, it appeared on the company's official forum in a new render.

The JiaYu G6 is somewhat reminiscent of the design of the Huawei Ascend P6, with its rounded top and bottom, curving against the back of the device. From the render appeared today on the official forum, it seems that the JiaYu G6 will be made with an aluminum body, and, according to what we can deduce from the render, will have a double rear speaker and a connector for charging (perhaps wireless), always placed on back side.

The OGS display from 5.7 inches with resolution Full HD will make the JiaYu G6 the biggest smartphone that the company has ever produced, but, as happened with the JiaYu S2, the company's designers have worked hard to minimize the overall dimensions of the device, which were officially announced, and correspond to 156 79 x x 8mm.

We also know that the smartphone will have the NFC, a battery from 3500mAh and MediaTek processor octacore. No information yet on price and launch date, but, as has already happened for the other JiaYu devices, we hope to see also the G6 soon on eJiaYu.it!