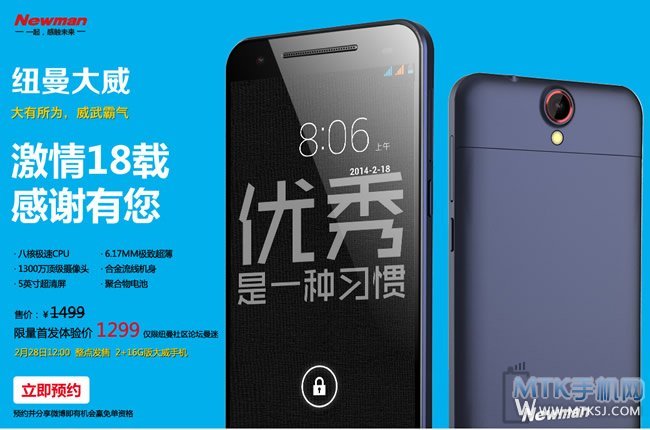 From day to day, Chinese octa-core smartphones are becoming increasingly accessible. Naturally, residents in China are able to benefit most from this tight price war!

Newman has announced that the new K18 will be available at a starting price of only 120 euros! The Newman K18 is the second octa-core smartphone of the Chinese company that goes to support the K2S phablet. The K18 is equipped with a 5 inch display with 1920 x 1080p Full HD resolution with 441ppi density. In addition, the device will be equipped with Sony 13 mega-pixel rear camera with f / 2.2 aperture, 5 mega-pixel front camera and, of course, MediaTek MT6592 octa-core processor with 1.7GHz clock frequency.

Like many other Chinese smartphones launched last year, the Newman K18 octacore will also be available in two versions: the "Classic" version with 1GB of RAM and only 4GB with internal memory and support for networks only TD- SDCMA for the 3G (therefore compatible only in China); and the "Ultimate" version dedicated to overseas buyers and equipped with 2GB of RAM, 16GB of internal memory and WCDMA support (therefore, compatible with European 3G networks).