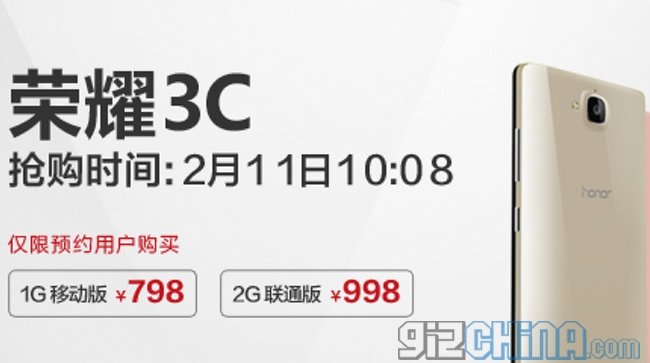 One of the most anticipated smartphones of the year has finally arrived on the market, we are talking about the Huawei Honor 3C with 2GB RAM in version WCDMA.

The established goal of Huawei with the launch of the new series Honor was to give Xiaomi a hard time and more specifically put the sticks in the wheel to his best-selling smartphone, the Xiaomi Hongmi. Viewed and considered all, Huawei would seem to be right on track!

While Xiaomi fans had to wait almost 6 months for the release of the WMSMA version of the Hongmi, Huawei's for theHonor 3C WCDMA not even a month. Indeed, to be honest, the released version is well equipped 2GB RAM and well 8GB of internal memory. As for the specifications, on board the Huawei Honor 3C we will find a display from 5 inches with HD resolution 1280 × 720, processor quad-core Mediatek MT6582, rear camera by 8 mega-pixels with opening F2.0, front camera from 5 mega-pixels and battery from 2300 mAh. The launch price in China is 998 ¥ (approx €120), but probably on the main international stores we will see it in the list at about 140-150 €.
Do you like our posts? Follow us on Facebook, Twitter, YouTube and G + not to lose all our updates!