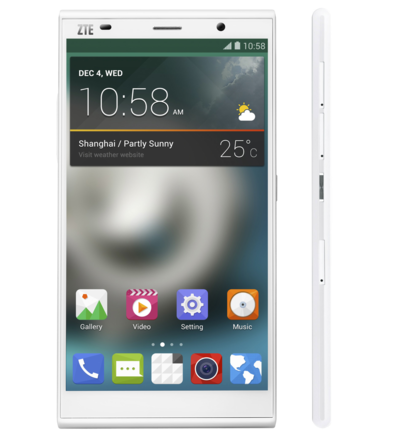 ZTE had announced that he would use the audience of the Mobile World Congress in Barcelona to present his own ZTE Grand Memo II LTE and so it was.

The ZTE Grand Memo II LTE has a surface equal to that of its predecessor (6 inches) but the thickness has been remodulated to bring it to a thinner one 7.2 mm. The appearance is certainly less "rounded" than the Grand Memo I but this is due to ZTE's choice to favor the display over the naked and raw body.

Under the large panel with rHD insulation and Corning Gorilla Glass 3 protection then we find a “now” mid-range hardware: processor Qualcomm Snapdragon 400, 2GB RAM, rear camera by 13 mega-pixels, front by 5 mega-pixels and finally battery from 3200 mAh.

Fans of the Android stock may be disappointed as ZTE has installed its firmware known as MiFavor 2.3 based on Android 4.4 Kitkat which boasts one new camera app and also a nice and useful way Split Screen which will allow you to run 2 app simultaneously.
Do you like our posts? Follow us on Facebook, Twitter, YouTube and G + not to lose all our updates!