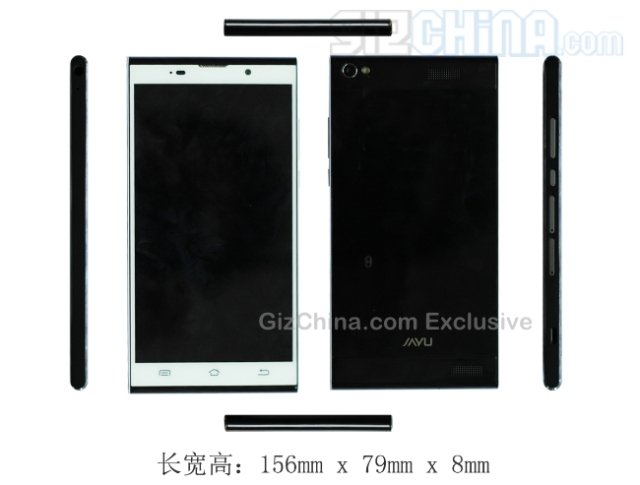 With the JiaYu S2 ready for production, Jiayu engineers immediately got back to work and the JiaYu G6 is the result. Here are details and specifications of the JiaYu G6!

Like all other companies, JiaYu always has something new in the pipeline, but unlike the others, JiaYu is always very open and willing to open up its plans.

JiaYu G6 talked about it already last year, but then it finally disappeared. The device is now back to light, but not as a phablet, as previously believed.

We do not know all the specifications of the new JiaYu G6 and, above all, if it is equipped with 4G LTE support.

But let's see what we know about the new JiaYu device. The display of the G6 will be a 5,7-inch 1920 x 1080 OGS panel with Corning Gorilla Glass 2 protection and a density of 386 PPI. The phone will be equipped with the Mediatek MT6592 2.0Ghz octacore chipset and, as usual, in two models with option for 1GB and 2GB of RAM and 16GB and 32GB of internal storage.

JiaYu is making the G6 in a very resistant material (metal) with a front camera from 8 mega -pixel and the rear from 13 mega-pixel with LED flash. The phone should also be equipped with dual SIM support (two micro SIM cards) for the use of GSM and WCDMA networks.

The dimensions of the G6 mental structure will be 156 x 79 x 8 mm and available in black and white with alternating black and white areas (see image above). 3500mAh battery, two speakers, NFC and wireless charging complete the specifications.

Looking beyond the specifications and designs of the project, the JiaYu G6 looks like a solid device. Of the specifications, however, there are two disappointing "areas". The first concerns the version of Android installed (Android 4.2) and the second is the lack of expansion slots for micro SD, but the phone is still in the works and these details (along with others) may change in the coming days.

After seeing the first details and specifications on the JiaYu G6, what do you think of this new mobile phone? And what do you think about the opening of JiaYu regarding the diffusion of the devices? Let us know in the comments below!
Do you like our posts? Follow us on Facebook, Twitter, YouTube and G + not to lose all our updates!