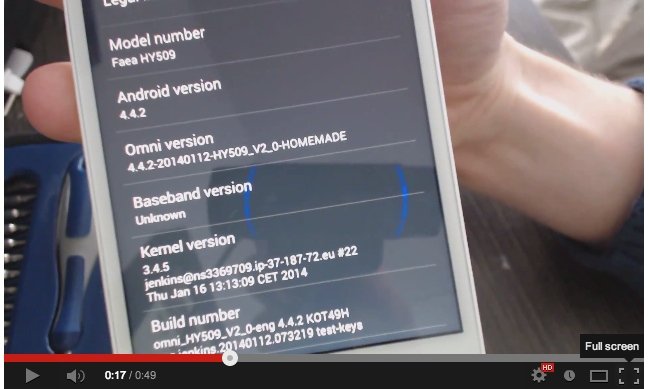 A video made by XDA Developer's xDrShadowx user shows the FAEA F2S run an Omni Rom based on Android 4.4 KitKat.

FAEA is one of the few Chinese phone makers that is looking to really get closer to developers and work actively to provide third-party ROMs for their devices. Of course, Oppo has anticipated all, but the FAEA devices are based on hardware Mediatek, a company known for its "hardness" in the release of source code.
A few months ago we saw for the first time a CyanogenMod performed on a FAEA F2S and today is the turn of the Omni Rom. Let's see it in the video!

The Omni ROM is based on Android 4.4 KitKat and as far as we know this is the first video showing Android KitKat running on a device equipped with a Mediatek MT6589T quad-core processor.
No details about downloading the Omni ROM for the FAEA F2S have yet been released, so we can assume that there are still some bugs to solve. However, we are already very excited to see this opening to the development of Chinese Android phones!
The FAEA F2S was FAEA's flagship smartphone of 2013 and features a 5-inch FHD display, 13 mega-pixel camera, 2GB of RAM and a 6589Ghz MT1.5T quad-core processor.
Do you like our posts? Follow us on Facebook, Twitter, YouTube and G + not to lose all our updates!