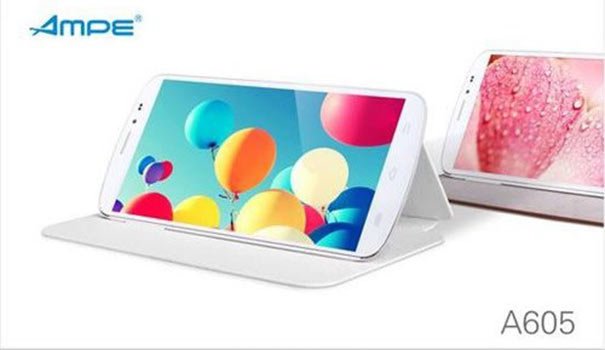 La Ampe is a Chinese company, founded in 2005, which in recent years has launched several tablets on the market, some of which have been successful. It is today the news that the company intends to expand its production line to smartphones and, more precisely, to those Big Size like phablet.

L'Ampe A605in fact, it will be the first phablet of the Chinese company, of which today we have a first rendering image and the first information about the specifications. According to information officially released by the company, the Ampe A605 will be equipped with a display from 6.44 inches IPS with resolution FULLHD 1920 x 1080. From what can be seen in the image spread today on the internet, this large 6.44 inch display is surrounded by a rounded body, narrow frames and a very elegant design.

But the "gem" of the device, of which unfortunately the complete specifications are not yet known, concerns the equipment of a camera with sensor from 13 mega-pixels and opening F2.0.
As already mentioned, unfortunately the complete specifications of the Ampe A605 are not yet known, including those concerning the processor used by the device. Will it be the new 8-core MT6592 or simply a quad-core MT6589T?
Do you like our posts? Follow us on Facebook, Twitter, YouTube and G + not to lose all our updates!