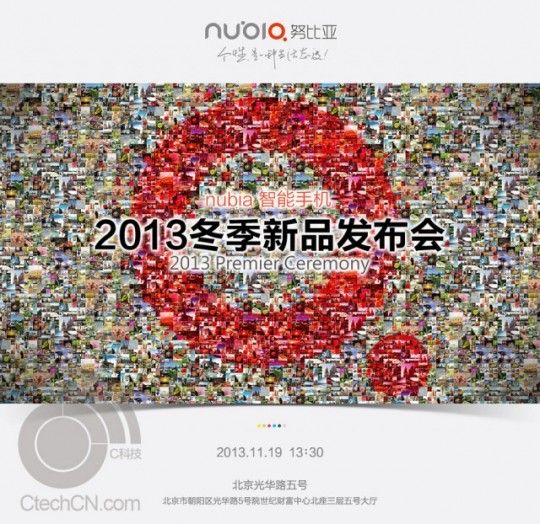 While we ardently await the launch of the 8-core MT6592 Zopo smartphone, another big Chinese company, ZTE, has started sending official invitations for an official event to be held on November 19 at the Bejing Prosper Center and which could unveil the new Nubia Z5S.

Although it is known that ZTE is working on a new device of the Nubia series of a precise launch date, there is still no trace. As for Zopo, on the other hand, there has been a lot of talk about his Next Generation phone, but seen poco.
Indiscretions, and at this point also concrete facts, about the sudden arrival on the scene of the Nubia Z5S make us very curious ...

The Nubia Z5S is the successor to the Nubia Z5, with specifications including Qualcomm Snapdragon 800 processor, 2GB of RAM, 5 inch Full-HD 1920 × 1080 display, 5 mega-pixel front camera, 13 mega-pixel rear and Android 4.3 operating system. Certainly the previous Z5 (also released in the US in recent weeks) had already represented a leap forward in design, the Nubia Z5S should confirm this trend.

We can not predict how this device will buy on the market, but no doubt Chinese smartphone fans will have much to talk about with Nubia Z5S, Zopo 8-core and of course Vivo Xplay 3S.
The future, for the Chinese mobile industry, is expected to be rosy!
Will ZTE succeed in stealing the scene from Zopo?
Do you like our posts? Follow us on Facebook, Twitter, YouTube and G + so you do not miss all our updates!