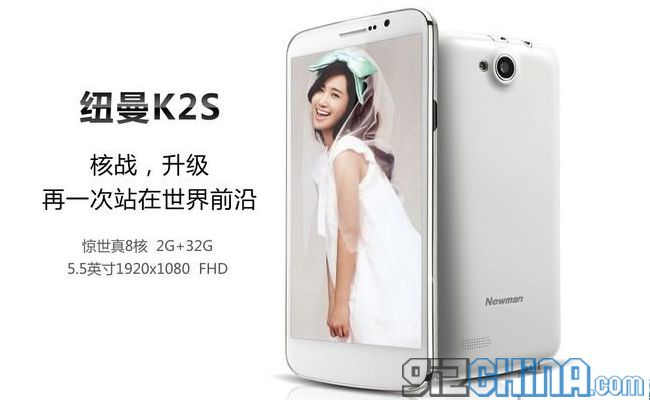 Newman hopes to be able to extend the life of his Newman K2 a bit with an update to the 8-core processor, more memory, improved 3G connectivity and higher level photographic performance ... All this is Newman K2S!

When we tried the Newman K2 for the first time a few months ago, we were not particularly impressed. The phone was heavy, a bad copy by Samsung, with not particularly high performance, despite the quad-core processor and the 2GB of RAM. Not to mention the camera ...

Thank goodness Nemwan has taken note of the incomplete success of his smartphone and decided to give him one refreshed.
The new Newman K2S will not be equipped with a quad-core processor but with Mediatek's 8-core MT6592 1,7 Ghz, it will have at least 32GB of internal memory, a 13 mega-pixel camera with F2.0 aperture, for better performance in low light conditions.

Other details include support for 3G networks (TD-SCDMA, WCDMA), the magnetic sensor and the 4.2 JB Android system. The price should be that of the current version Newman K2m or 1499 yuan (about 180 €).
Do you like our posts? Follow us on Facebook, Twitter, YouTube and G + not to lose all our updates!