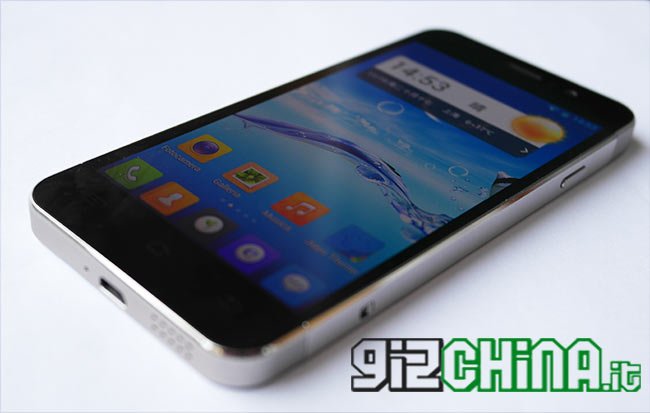 After presenting the unboxing in European exclusive, today we will see the complete review of the JiaYu G5, the new smartphone with which JiaYu, in its realization, was freely inspired by the lines of the Apple iPhone.

The new Mediatek 8-core MT6592 chipset has been unveiled and the era of a new generation of Chinese phones has begun. There could be no better way to "greet" the previous generation with two truly excellent smartphones: the JiaYu G5, which we will analyze today, and the Xiaomi Hongmi Umts, whose review will be published in the coming days. 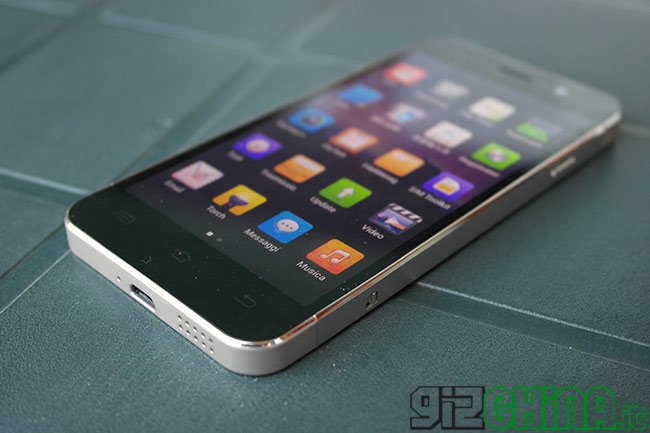 JiaYu G5, the full review in Italian by GizChina.it

Features of the JiaYu G5 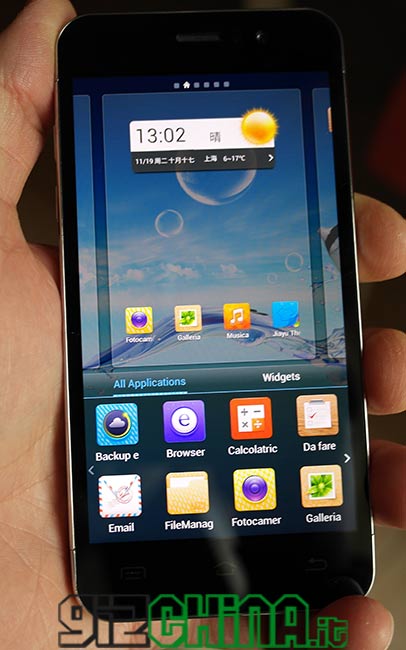 But let's see them complete specifications of the JiaYu G5 Basic

Before continuing, let's review the unboxing video of the JiaYu G5.

As we have already stressed, the design of the JiaYu G5 clearly incorporates the lines of the Apple iPhone 5, with in addition, however, a larger display and OS Android. These last two elements, added to the much lower price, are two points in favor of the G5 compared to the iPhone compared to those who are attracted by the Apple device, do not buy it because too expensive, too small and without OS Android. 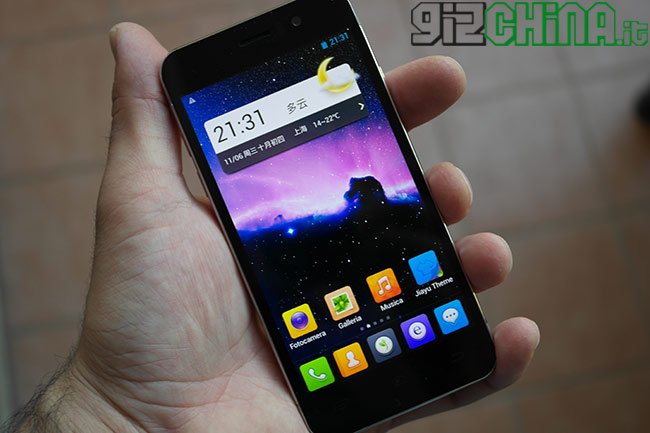 The display size of the Jiayu G5 from 4.5 inches is still enough to make the phone easily usable with one hand. In fact, almost 100% of operations can be performed without the need to use both hands. 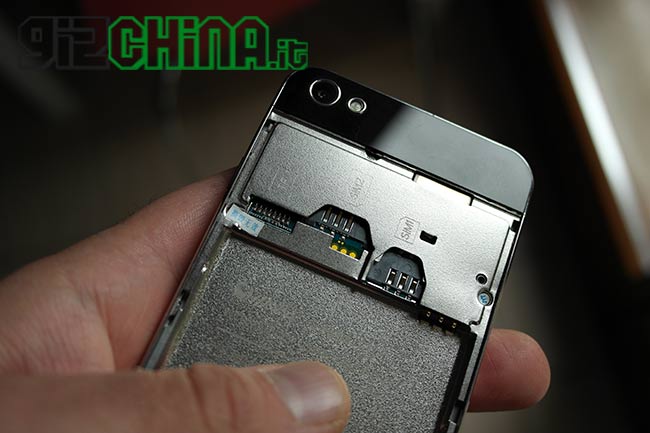 The structure of the JiaYu G5 is almost entirely made of stainless steel, which guarantees the phone the right robustness combined with an elegance, we could say, lasting over time.

The quality of the materials of the products is something on which JiaYu has always invested, just think of the very successful JiaYu G4, of which we presented a review of our friend Francy. 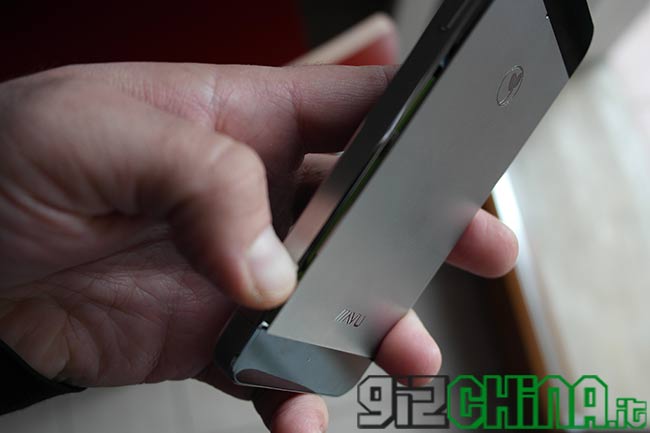 As noted for the Meizu MX3 also the JiaYu G5 and, in particular, its rear stainless steel shell, seems to be assembled in a "definitive" way, such that it cannot be dismantled by the user. But it is not so and, in fact, despite the great similarity with the iPhone 5, an external SIM tray is absent. 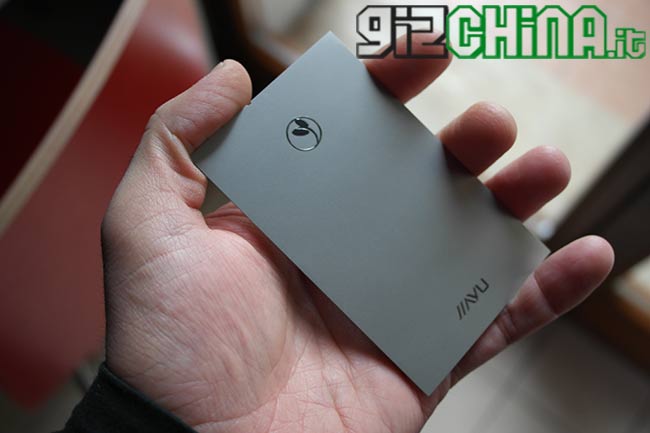 The operation is quite simple as it is sufficient to press a small lever that will unhook the outer shell in stainless steel, making it removable. 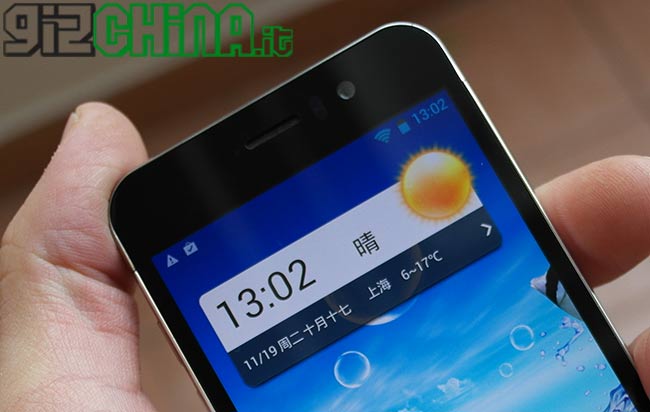 At the front we find the cameras (top) from 3 mega-pixel (on the right side), the various sensors. 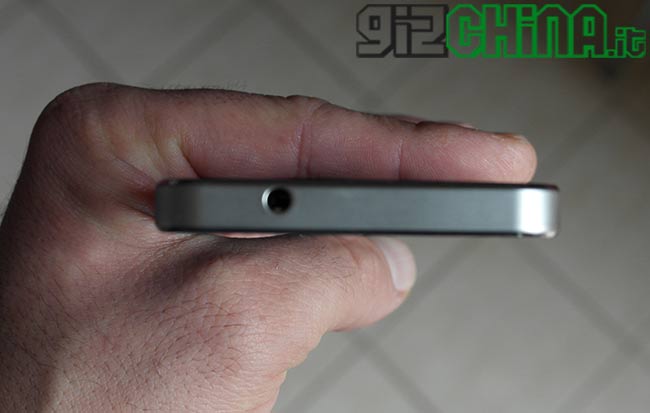 On the upper edge, on the left side, there is the 3,5 jack for the earphones. 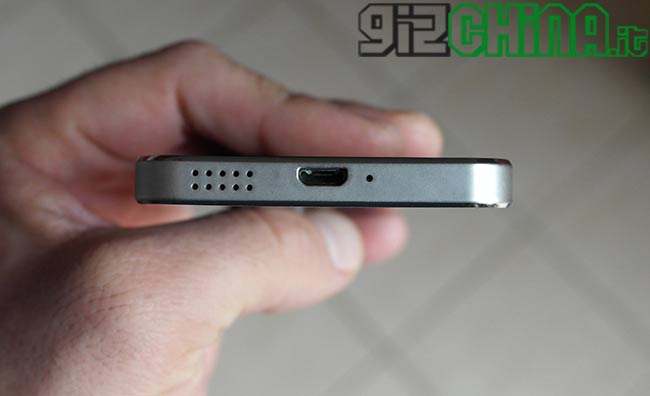 On the lower edge, at the center of the shell, we find the microUSB attack and laterally the speaker. 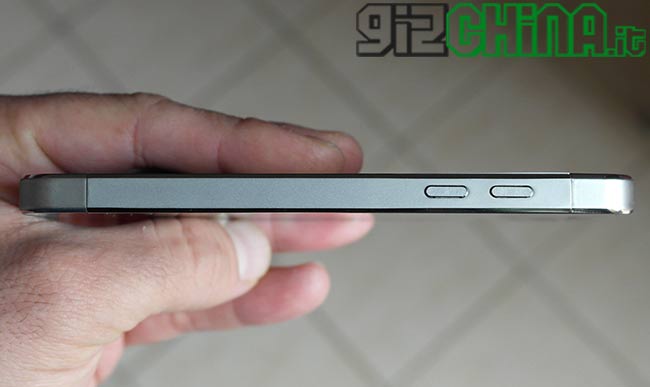 On the left side there are the volume keys + and -. 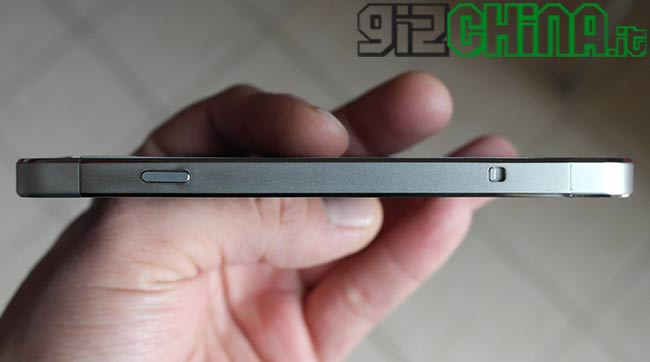 On the right side there is only the power button. 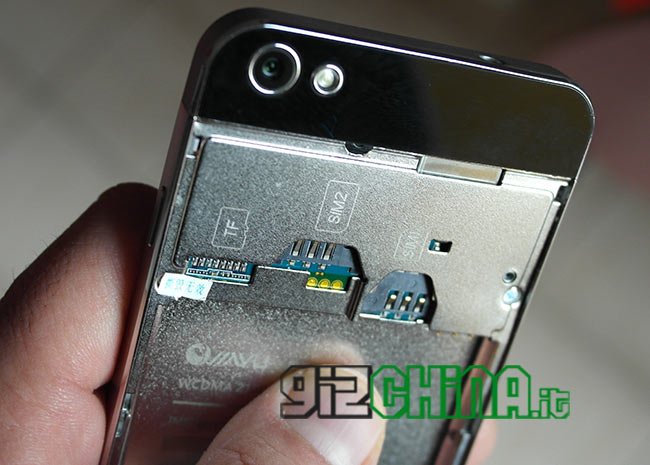 At the back we find the camera from 13 mega-pixel and the LED flash, placed on the right side.
Under the shell there are the two slots for the SIM (One microSIM and a normal SIM), the one for the microSD and the battery compartment.

The display of the JiaYu G5 is a bright 4.5 inch HD panel with 1280 x 720 resolution, protected by a Gorilla Glass. Although the display of the G5 is not a FULLHD, the images are very clear and well defined, with bright colors and very realistic. 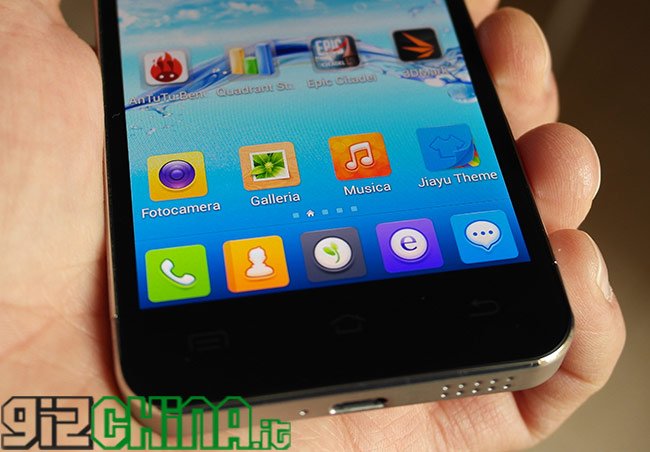 The small size (4.5 inches compared to the 5 inches of the many smartphones on the market) in fact allows an excellent performance even at a lower resolution.

The performance of the JiaYu G5 surprised me in every respect. The results of the various benchmarks carried out confirm (numerically) my impressions. The score obtained on Antutu is well 16.795 points. 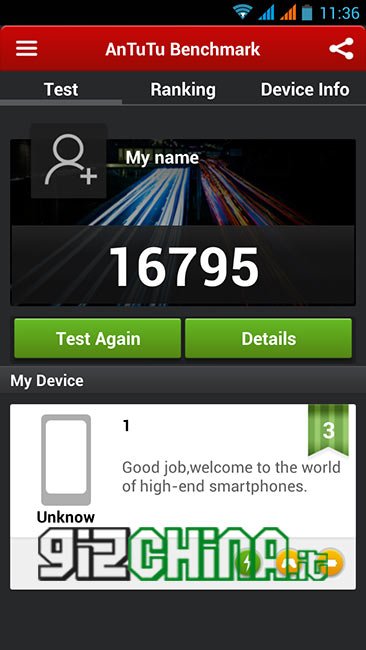 Benchmark Quadrant of the JiaYu G5

The result of the benchmark made with the Quadrant app is 4843 points. 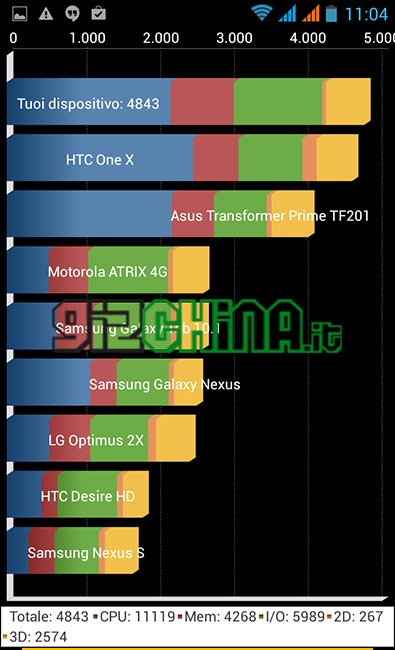 Vellamo benchmark of the JiaYu g5

The two tests performed with the Vellamo app, HTML5 and METAL, have respectively scored a score of 1628 e 540 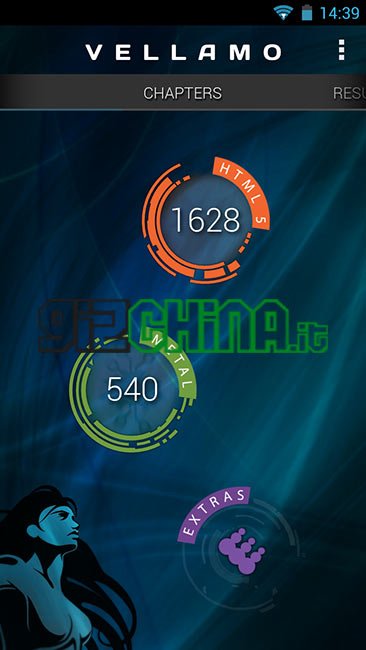 Benchmark Nenamark2 of the JiaYu G5 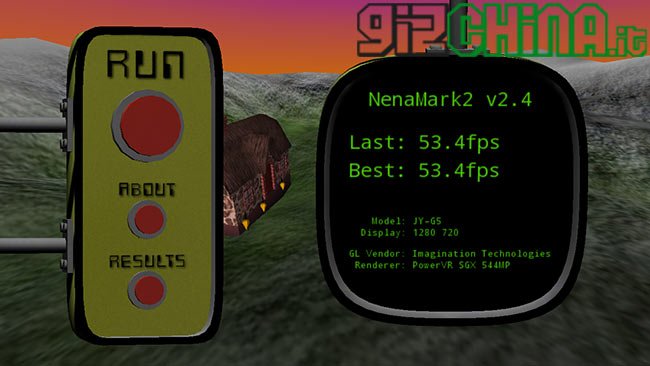 I also made a video game test with Riptide GP2, here it is:

The telephone reception of the JiaYu G5 is excellent, I have not detected any signal loss or scarcity problems. The call audio and the volume of the external speaker with active "speakerphone" are also excellent.
Same talk for navigation in 3G, always fast and without any uncertainty.

The GPS of the JiaYu G5 is very performing, after a first fix made in Engineer Mode. The subsequent fixes were fast and precise and stable navigation. 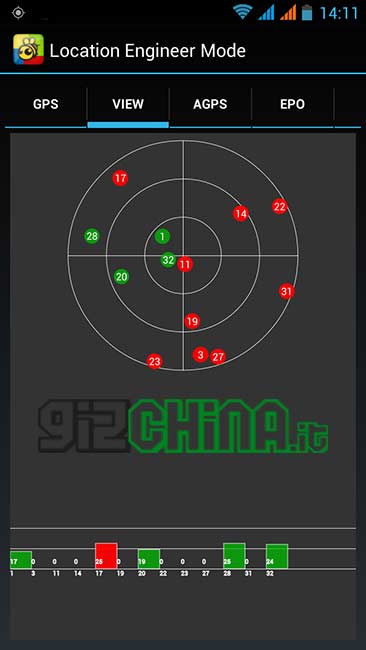 I tested WiFi reception by running tests at the distance from the 2 meter, 5 meters and 7 meters in a different room (separated from the router by a wall very often). I have not detected problems with signal loss. These are the results:

The JiaYu G5 bluetooth works very well. Also in this case it was tested, with positive result, with the apparatus installed in my car.

NB It should be noted that the rear camera of the JiaYu G5 has a sensor from 13 mega-pixels "full". The photos were taken with the camera app of the miui rom which, with the setting "16: 9", returned an incorrect value of the mega-pixels.

The rear camera of the Jiayu G5  it behaves quite well, even in low light conditions.

As usual, you can download the original resolution photos here. 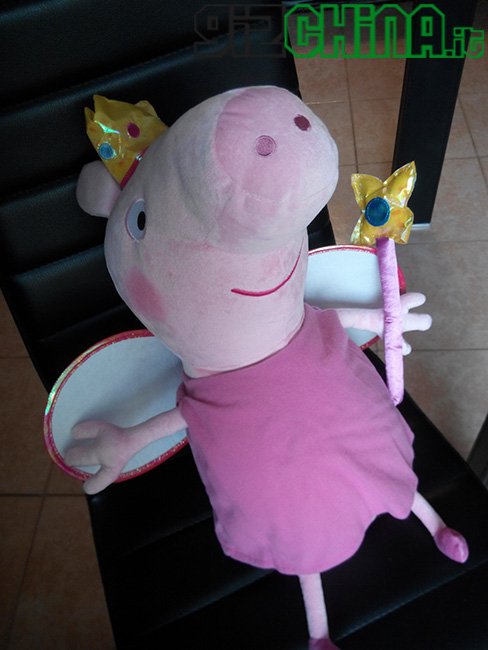 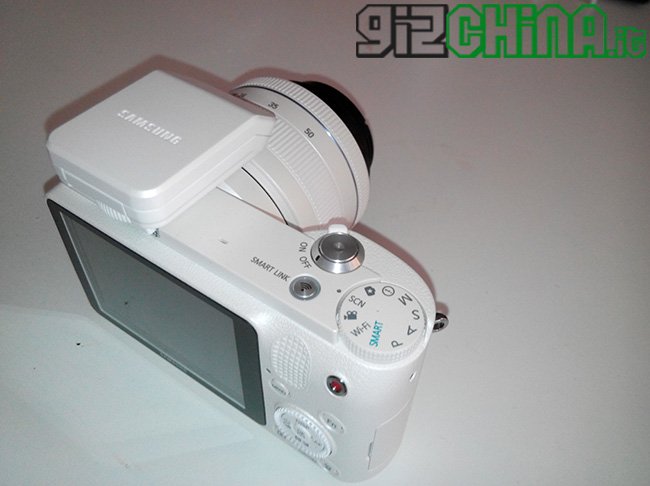 Photos in low light are good and the LED flash behaves well. 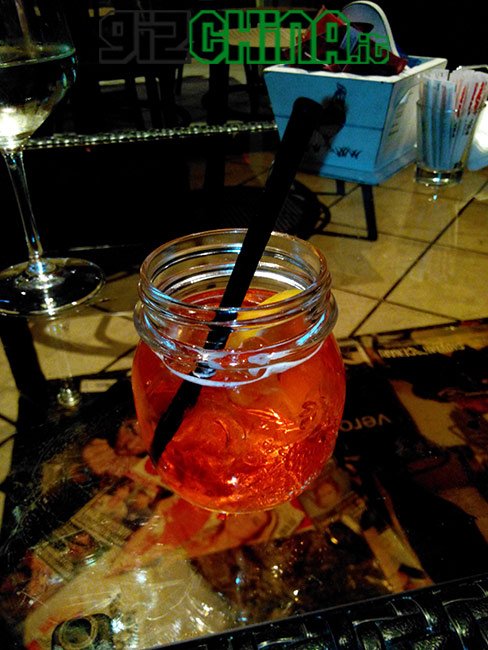 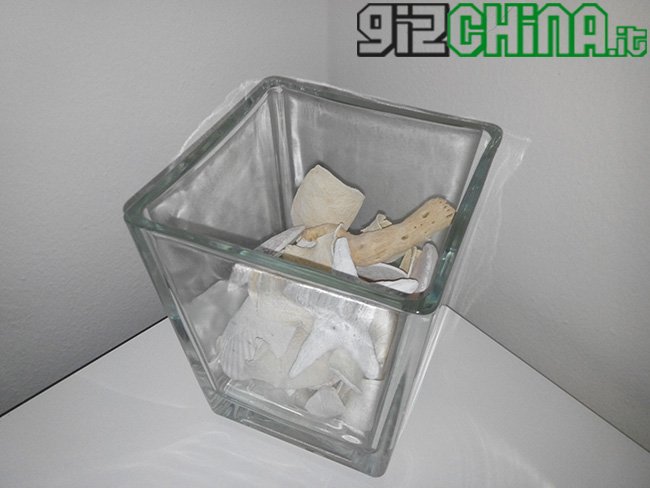 So what do you think of the JiaYu G5's camera? Do you still think that 8 mega-pixels are "few" or do you think the shots are of a good level? Please let us know leave a comment below! 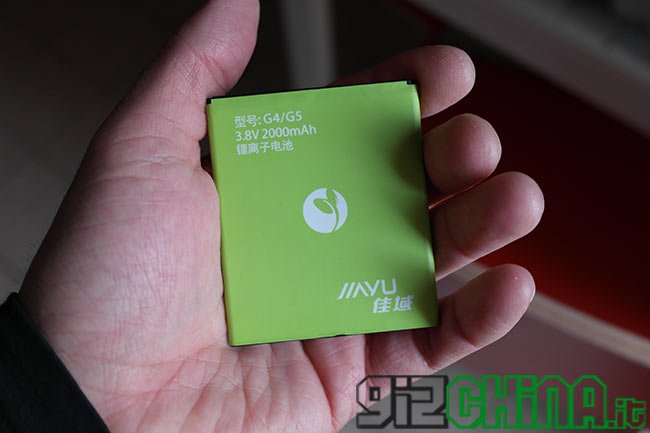 One of the biggest question marks of the hardware sector of the JiaYu G5 is related to its battery and the only 2000mAh from which it is composed. Well, with very heavy use (as usual summarized below) I managed to get to poco before dinner time (around 19.20) with a residual autonomy of 2%. At 19.30 the G5 left me.

Again in this case, I underline what I mean for intense use:

So, given the only 2000 milliampere now, the battery life of the JiaYu G5 can be defined as optimal. However, remember that there is always the possibility of buying the increased battery from 3000 milliampere or, why not, also a second one from 2000, so as not to compromise the aesthetics of the JiaUi G5.
Excellent, therefore, on the G5 the optimization of resources by the system and therefore something that probably JiaYu worked a lot on.

The JiaYu G5 is really an excellent smartphone, suitable for those who do not like "big size". The one-handed usability is certainly one of the strong points of the phone, as is the construction and assembly quality.

The photographic quality is certainly not at the TOP, but it is still enough to make good shots and, therefore, suitable for everyday use.

Despite not being a FULLHD the display is extremely bright and defined. In my opinion, on a device with a 4.5-inch display, a 1280 x 720 HD resolution is more than enough. Furthermore, the "lower" resolution favors better performance. The JiaYu G5 is, in fact, much more fluid and responsive in the touch than the other devices with FULLHD display that I have tested in recent months.

The design, as it is easy to imagine, naturally lends itself to customizing the "UI" style system UI. For this reason we decided to propose soon an iOS 7 style GizRom for JiaYu G5, based on the MIUI V5 already published! 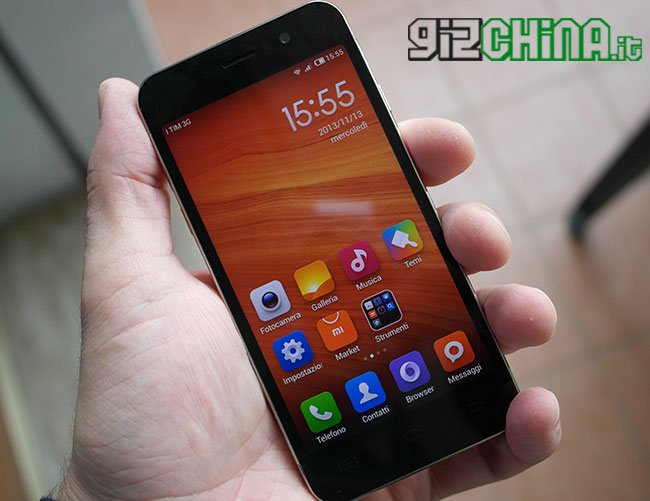 I recommend you to stay connected, because in the next days we will publish the iOS7 ROM for JiaYU G5! Here is a taste! 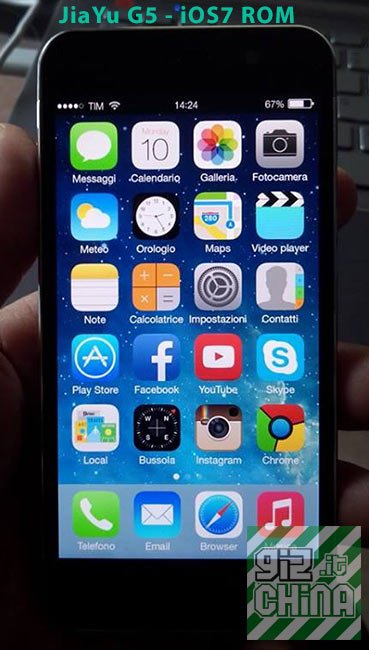 Those who are interested in this device, also available in the Advanced version, (or others of the JiaYu line) will be able to buy it directly from Italy on the store ejiayu.it taking advantage of an exclusive discount through the GIZJIAYUIT discount code, reserved for GizChina readers!
I remind you that the smartphones bought on ejiayu.it they are shipped from Italy and enjoy 24 months of Italian assistance and warranty.
Do you like our posts? Follow us on Facebook, Twitter, YouTube and G + not to lose all our updates!