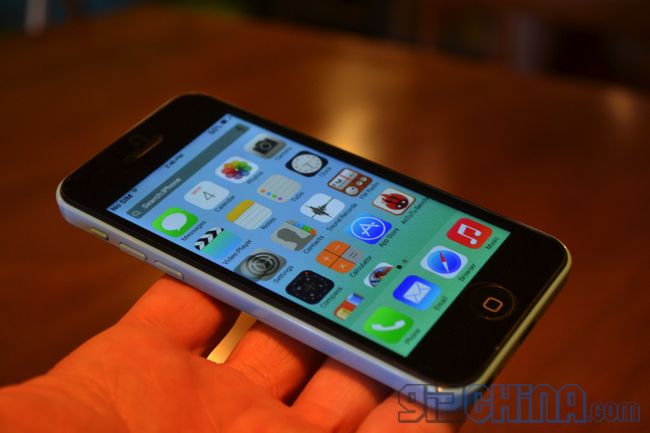 After years of hypothesis, conjecture, rumor and above all of expectation, Apple has sold and launched an "economic" version (or better cheaper) of the iPhone, the IPhone 5C, whose main features are a colored plastic body and a price certainly more contained.

The iPhone 5C quickly became popular in the US but for example in China, the price made this smartphone so poco wished that some retailers have decided to cut the price by over $ 100. In the Asian country it is also easy to find clones of the device, some of which are truly identical, one of them is GooPhone i5S.

GooPhone has proved extremely fast and efficient in marketing its GooPhone i5C, arrived on the market almost at the same time as the original device. 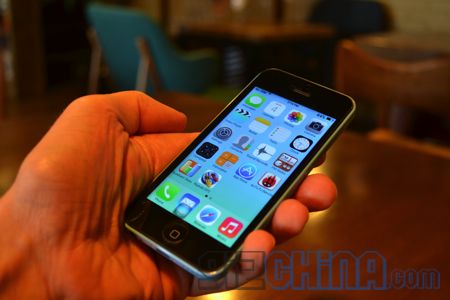 As usual, GooPhone has managed to produce an incredibly accurate copy of the original phone, managing to keep the price low by making use of cheap components.

Sold at $ 119.99 (about 86 €), GooPhone i5C is one of the cheapest Android devices in its market and, just to get a competitive price, GooPhone had to leave out a few details. 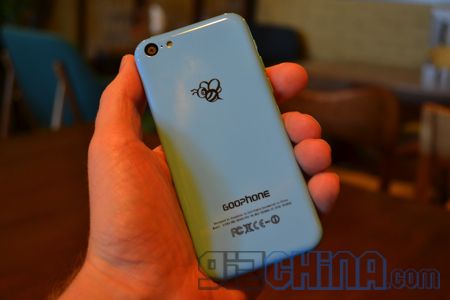 The display is a 4-inch panel with 854 × 480 resolution, the processor is the Mediatek MT6572 dual-core 1,2Ghz supported by 512MB, the rear sensor is 5 mega-pixels. When compared for example with Xiaomi Hongmi or JiaYu G2F, the GooPhone i5C proves to be inferior from any point of view. The battery is a 1500mAh unit.

GooPhone certainly makes some of the best clones of the iPhone, but this type of operation often leads to compromises ... And so, GooPhone i5C does not have dual-SIM support, or memory expansion slot (although they said that removing the back cover, there would have been a small dedicated tray ...) and not even navigation buttons or notification LEDs. 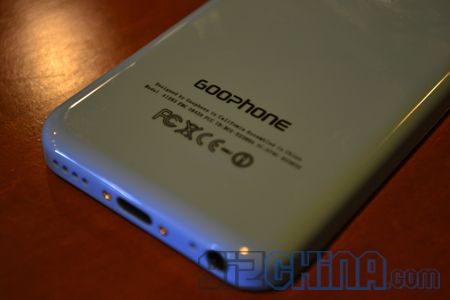 The model we received is blue and features: the GooPhone logo on the back, the on / off screen lock button at the top, volume management on the left side and finally the 3.5mm jack, speaker grille and mock charging point at the bottom. 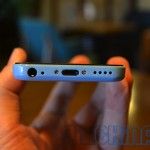 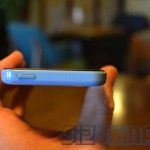 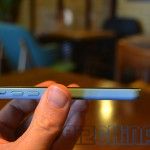 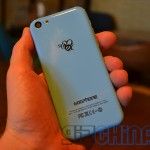 The front, with the exception of the 1.3 mega-pixel camera, is mostly occupied by the 4 inch display. On the lower part there is the only physical button on the phone.

On the back we find the 5 mega-pixel camera with LED flash and, on the right edge, the tray for the SIM.

Design and production are of excellent quality considering and considering the price (not for anything else, but GooPhone was inspired by Apple ...).

In addition to the GooPhone logo on the back, the only difference from the 5C iPhone is that the entire display area protrudes more than the plastic shell from the original 5C iPhone.

Behind the look from iPhone and the camouflaged OS iOS7 style, GooPhone remains an Android smartphone running Android 4.2 (a highly customized version) and, just as for the design, even OS and usability are compromised. 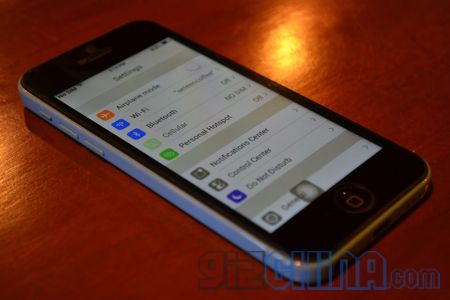 If you are an Android fan you will certainly not be fans of iOS OS style iOS7 run by GooPhone i5C and probably want to change it with another custom ROM or at least change the launcher.

That said, the ROM that mounts the current GooPhone is definitely better than the previous ones, including among other things a file manager and the Google Play Store from which you can download your favorite apps!

Just like for iOS, also in this ROM there are many pre-installed apps and each one follows the shape and name of the equivalent app of the IPhone operating system. The Safari icon opens the Android browser, the App Store is the Android Play Store ... 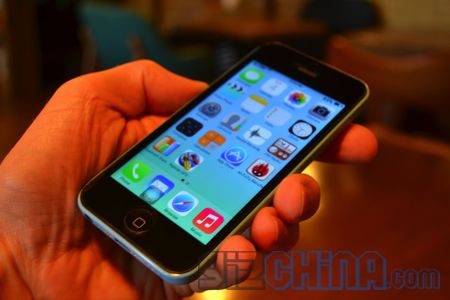 Another point of discussion, whether you are an Apple or Android user, is the physical Home button. Android users will certainly not like the lack of the classic 3 capacitive buttons, but Apple will complain about a physical button that works from "Back" and not from "Home".

All the features of the OS are very similar to those of iOS7: the icons with a long press can be moved or placed in a folder and also the multi-tasking is very well managed.

From a dual-core processor and a RAM from 512MB we do not expect any kind of performance, but for example Riptide GP2 runs very well and without slowdowns. To clarify the ideas, the UMI Cross, which features a Full-HD 1920 × 1080 display and is powered by 6589GHz MT1,5T chipset and supported by 2GB of RAM, could barely open the same game. 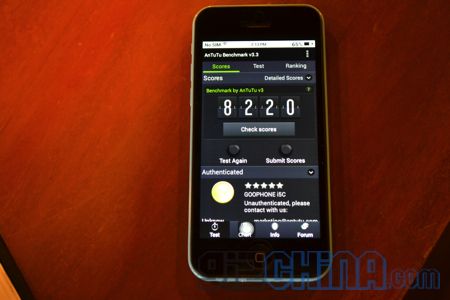 We do not think that whoever will buy the i5C GooPhone will do it because he is enthusiastic about the performances. For the sake of it we have run the Benchmark Antutu and we have obtained a rather modest result of 8.820 points.

As a smartphone intended for standard use and gaming, let's say, "lighter", The GooPhone i5C can go just fine. Maybe it's a bit 'when you face game to elaborate more complex, but it is a sin all in all forgivable. 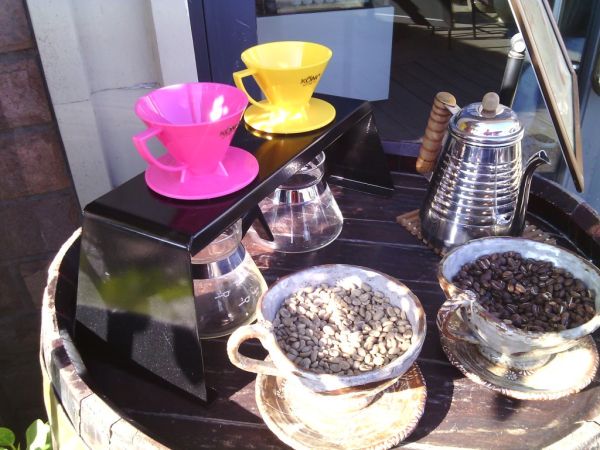 The 5 mega-pixel sensor of the GooPhone i5C is a unit that probably had a smartphone launched last year, perhaps a little outdated. Compared to those from 8 mega-pixel taken from the current entry-level the difference is clear.
As for other low-end Android devices, if you bought it, you would be able to obtain satisfactory images (losing a bit of time to focus ...) but do not rely too much on it. 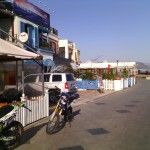 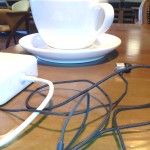 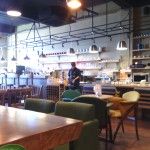 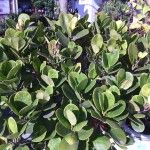 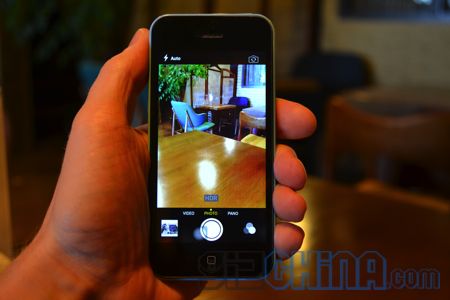 The app's interface is pretty and works just like the original, removing the fact that the auto-focus is more limited and the shot proves to be much slower.

It's really hard to define what the target market for this GooPhone i5C will be: those who want an Apple-style phone will surely love the 1: 1 design and the iOS-style Android interface. However, there is the possibility that with the passage of time you may remain increasingly dissatisfied. Android users, on the other hand, will not want to look even remotely at a device replica of what they consider the main antagonist of their OS. 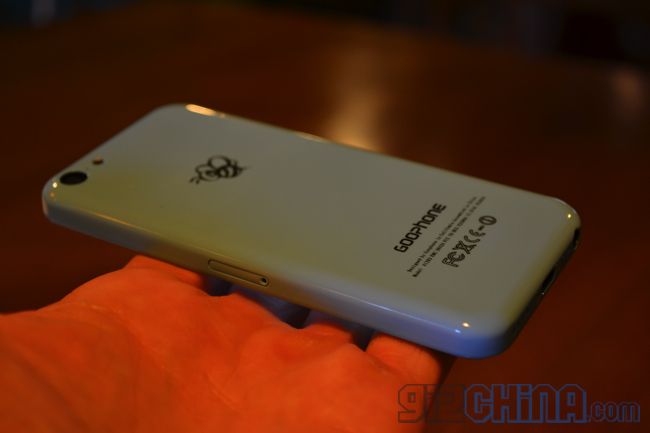 Parents who want a modern and cheap phone for their children could make us a little thought, but in all honesty I would allocate my money to other devices.

The GooPhone i5C is perhaps an "occasional missed". GooPhone could have combined for its i5C GooPhone as good as offered by IPhone 5C and Android to create a unique device and instead preferred to opt for a mix of style, convenience and functionality.

If you are interested in buying GooPhone i5C you will have to go to the official GooPhone.cc website, where it is sold at the price of 119.99 $ (about 86 €)

vivo X Fold S: A new folding top is on the horizon