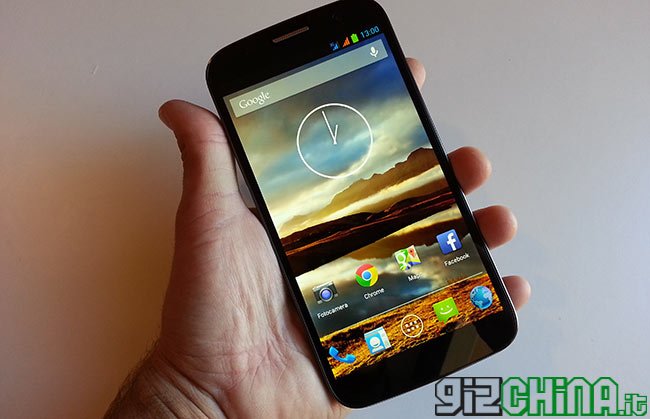 Chinese Phablets have been talking a lot lately and everyone seems to want one! Also for this reason those interested in this category of "big phones" cannot but read this review on the ZOPO ZP990 C7 Captain S.

With this phablet, in fact, Zopo seems to have done really seriously, combining in a single terminal an elegant design, a build quality never seen before and a firmware up to expectations.

UPDATE: for Zopo ZP990 (but also for ZP980, C2 and C3) is available for download the GizChina ROM porting of the MIUI V5 ROM! 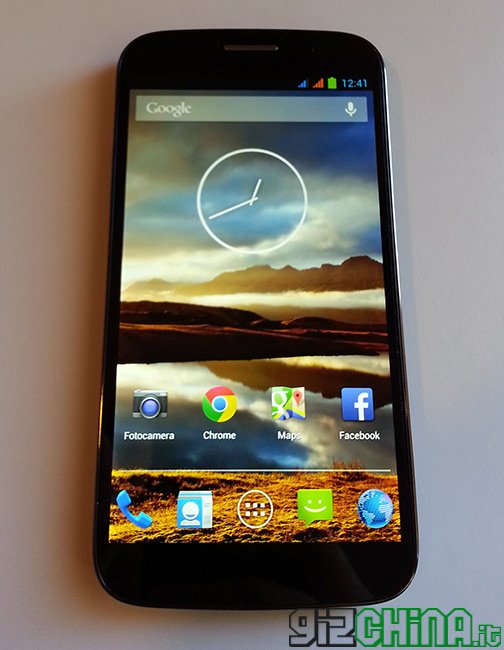 As usual we thank ZOPO ITALY for giving us the opportunity to test the new phablet ZP990 C7 Captain S and for offering our readers an exclusive discount, usable through the voucher GIZOPOIT5!

Before continuing with the review of Zopo Zp990, however, I think it is useful to dwell on some aspects, sometimes neglected even if of primary importance: What do you really need a phablet? What is the main use to which it can be dedicated? 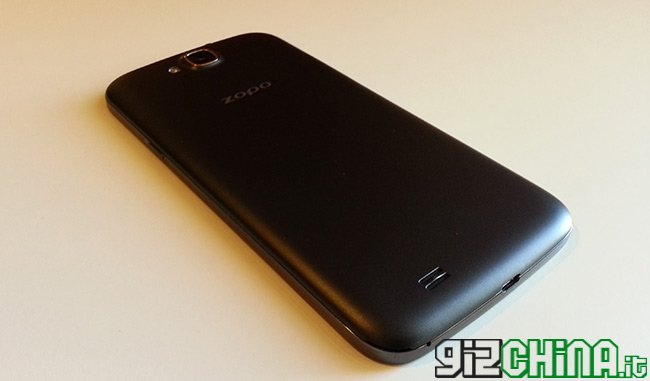 In fact, I think it is essential to ask these first questions to venture into the purchase of a device such as Zopo ZP990 or any other Chinese and non-Chinese phablet. We must carefully analyze the pro and against of such a choice.

In a very brief way we can recommend the purchase of the ZP990 to all those who, for business needs or because they are extremely passionate about mobile gaming, wish to take advantage of the convenience of an 6 inch display, large enough to allow excellent visibility of the contents, but not so cumbersome as to compromise its "portability".

All of us, in fact, know that the phablet is precisely the "right medium" between phone and tablet, between the need for the aforementioned "portability" and that of better visualization of the contents.

As briefly mentioned in the introduction, it must be emphasized that Zopo really did a great job in producing the ZP990 phablet. The specifications from TOP GAMMA, with the quad-core MT6589T processor from 1.5 Ghz, 1 / 2GB of RAM, 32GB of internal memory and FULLHD 1920 x 1080 display (further down you will find a complete card) are flanked by excellent build quality. 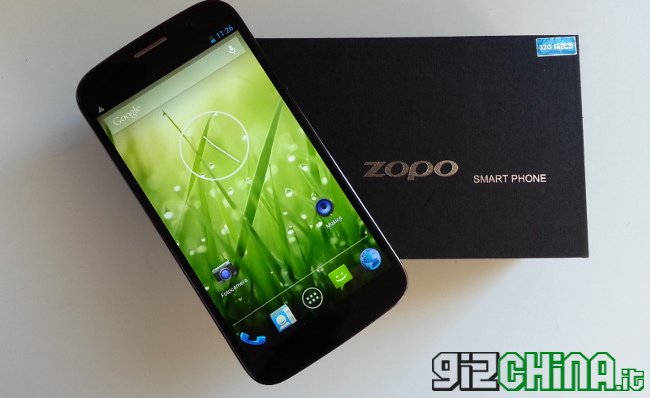 The body structure of the ZOPO ZP990 C7 Captain S is in fact made of aluminum and titanium, a combination that makes the phablet at the same time pleasing to the eye, consistent to the touch and resistant to the test of time.

The construction materials of the ZP990 are therefore at the height of the excellent hardware architecture, especially in its TOP configuration with 2GB of RAM and 32GB of internal memory, ie the one tested by me in these days.

The design of the Zopo ZP990 takes very clearly the shapes of the Samsung Galaxy Mega. If we do not take into account the absence of the physical home button and the different size of the display (6 inches against XMUMX of SG Mega) the Chinese phablet line can be considered extremely similar (not to say identical!) To that of the device Samsung home. 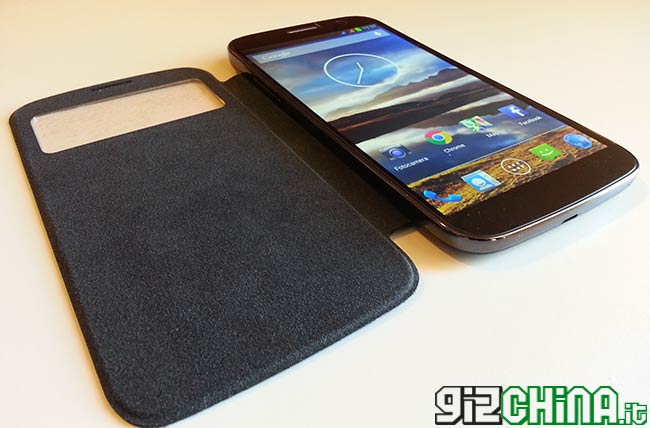 The excellent usability of the phablet derives from the constructive choices of Zopo and in particular from the creation of soft lines, rounded at the right point, especially in the back, and extremely narrow display contour frames (2,8 mm only). A right mix that allows an easy grip, despite the size of the display.

However, it is important to underline that one-handed use, in most cases, proved extremely difficult and that the smooth rear surface does not facilitate this task (due to the lack of grip). 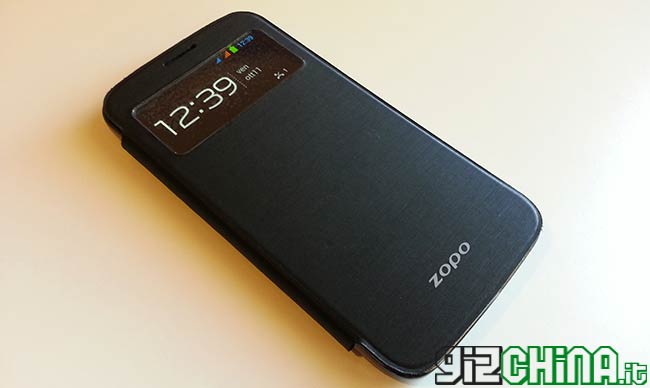 Of the quality of the Zopo ZP990 materials we have already spent some words in the first few lines of this review, underlining the constructive quality of the device. The solid structure in aluminum and titanium is in fact flanked by plastics that, at least to the touch, give the sensation of excellent quality. 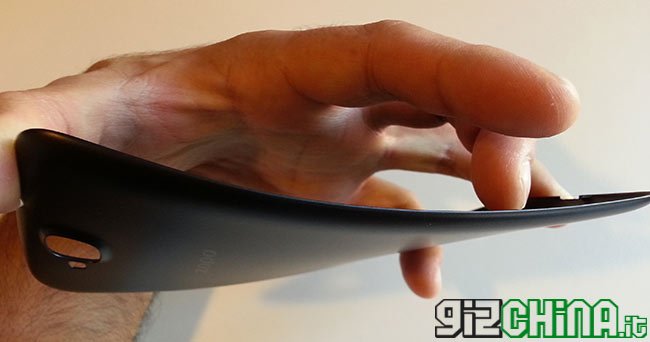 Excellent finishes, the quality of the assembly and the adherence of all the elements. The only aspect that has not convinced me at 100% regards a residual space between the battery and the back cover. This space makes the back of the phone slightly flexible giving an impression of less solidity. However it seems to be only an impression, also because I refer to a space of only a couple of millimeters.

At the front we find the cameras (top) from 5 mega-pixel (on the right side), the various sensors and the LED notification light. 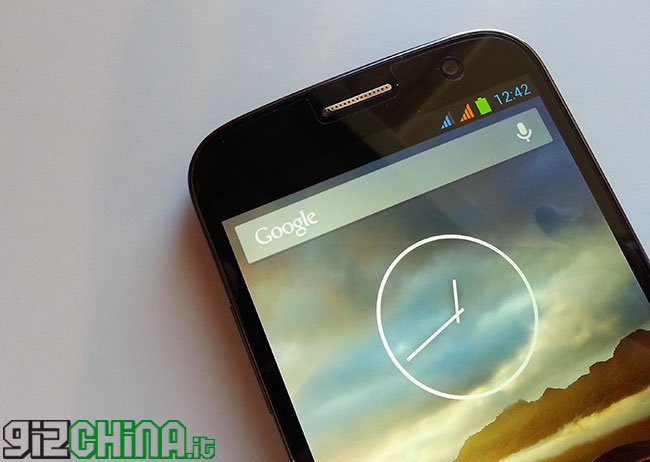 On the upper edge, on the right side, there is the 3,5 jack for the earphones. 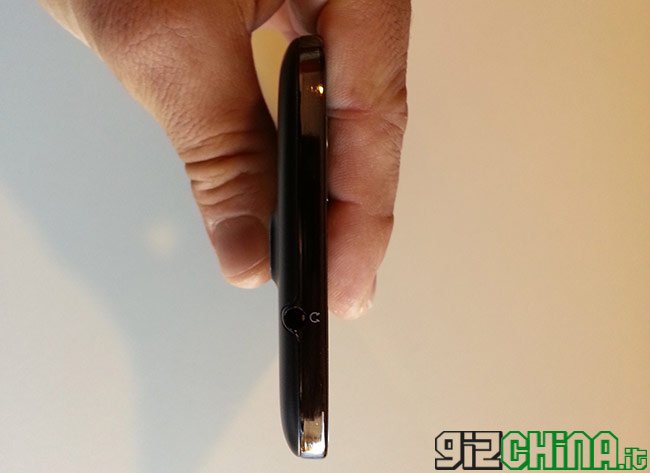 At the bottom we find the touch buttons well backlit and on the edge, at the center of the body, the microUSB attack. 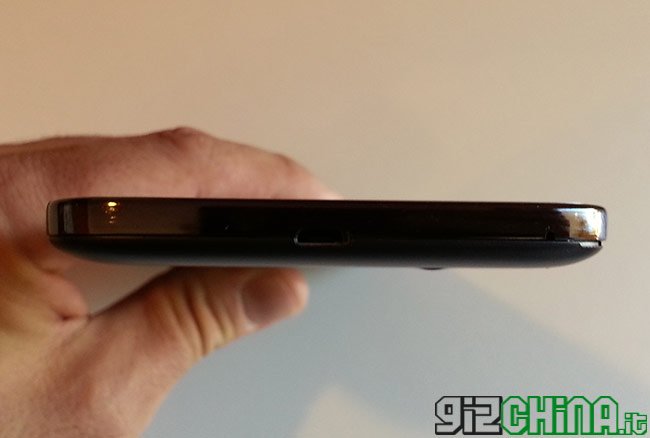 the control buttons are placed in the classic positions: the power on the left and the volume keys + and - on the right.

At the back we find the camera from 13 mega-pixel, placed in the center of the body and at the top with the Flash LED next to it and at the bottom the opening space for the speaker. 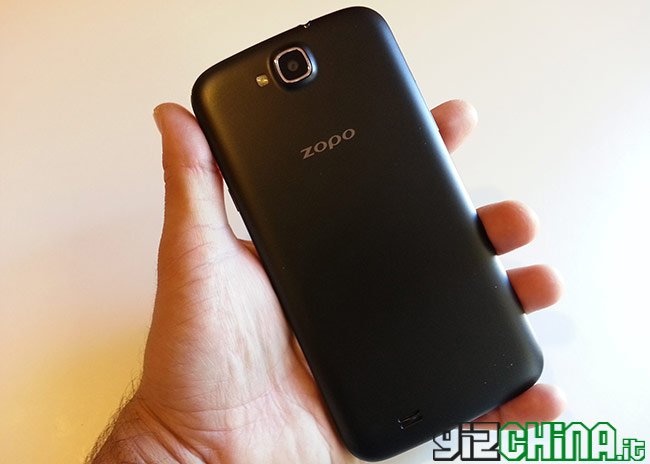 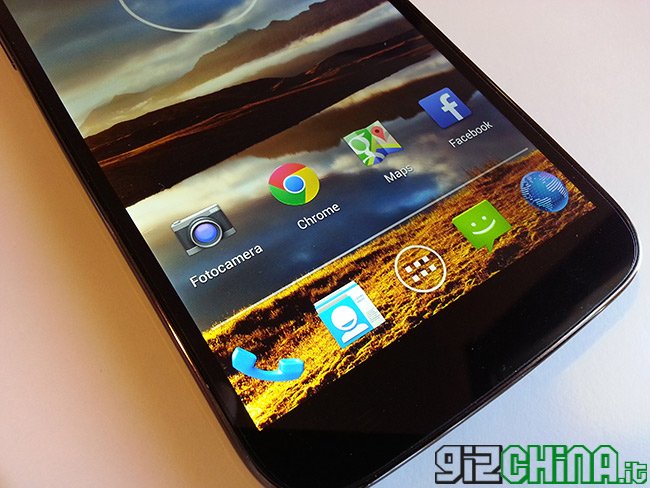 I thought that, given the size of the display, the 1920 x 1080 resolution would be affected. I must say that I had to change my mind. The sharpness of the screen is really excellent.

The performance of the Zopo Zp990 C7 Captain S also lives up to expectations. As we have already seen in the previous post where I presented the unboxing, the Zopo phablet reaches the excellent Antutu score of 15303! 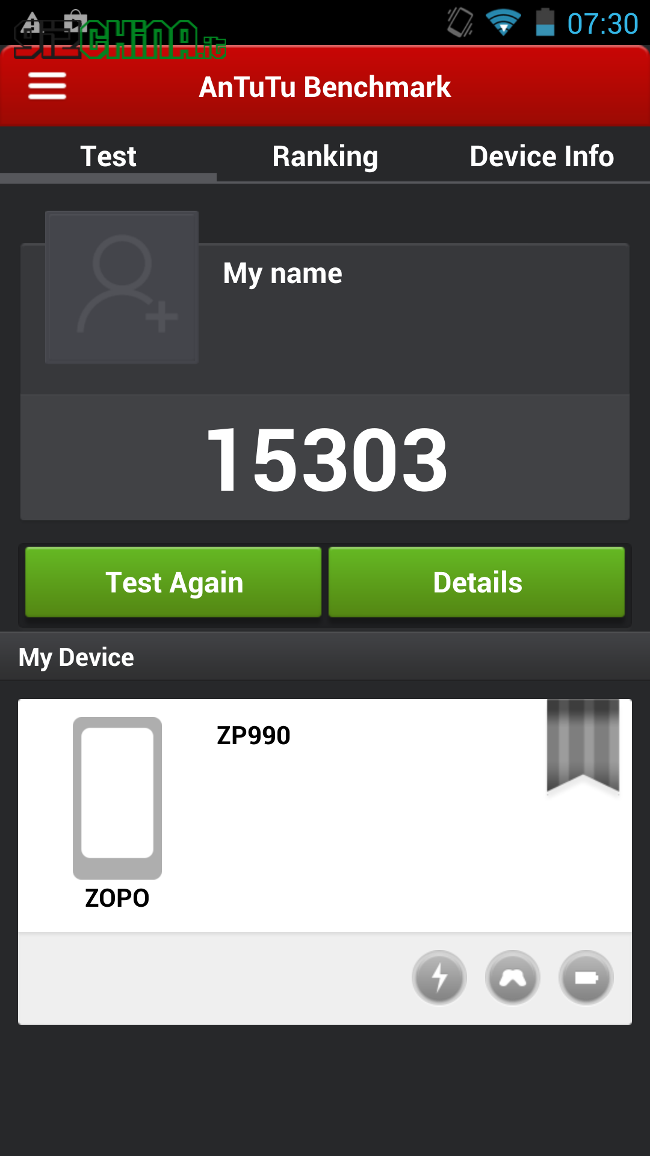 The result of the benchmark made with the Quadrant app is 4699 points.

The two tests performed with the Vellamo app, HTML5 and METAL, have respectively scored a score of 1525 e 525! 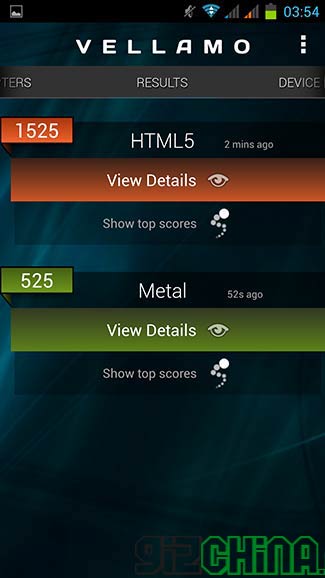 The result of the NenaMark2 test is 34.0 fps, in line with the other terminals with the same characteristics as the Zopo Zp990. 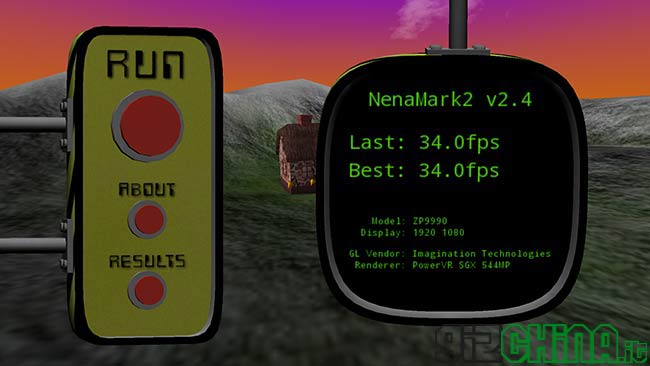 As usual, I also carried out the 3 texts of the 3DMark benchmark, the test dedicated to gaming performance. The results are as follows: ICE STORM 3693; ICE STORM EXTREME 1887; ICE STORM UNLIMITED 2893. 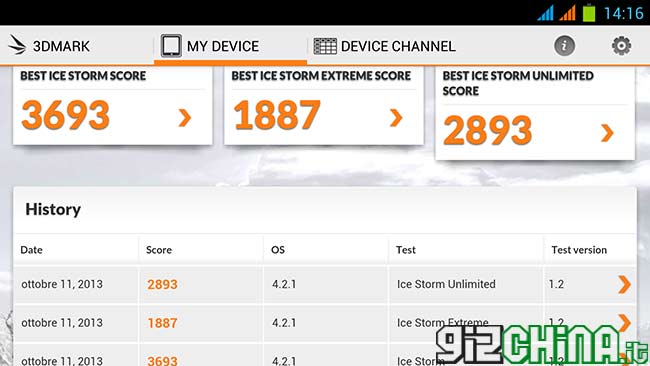 Also the result of the test carried out with Epic Citadel is more or less in line with those detected with the other MTK devices with specifications similar to the Zopo ZP990. The average is 42,4 fps. 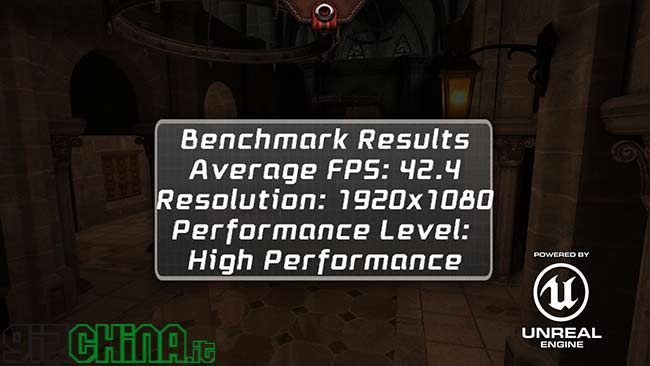 The Zopo Zp990 C7 Captain S's telephone reception is excellent. In fact, the usual problems of the Mediatek quad-core chipset related to the 3G sector seem to have been definitively resolved. 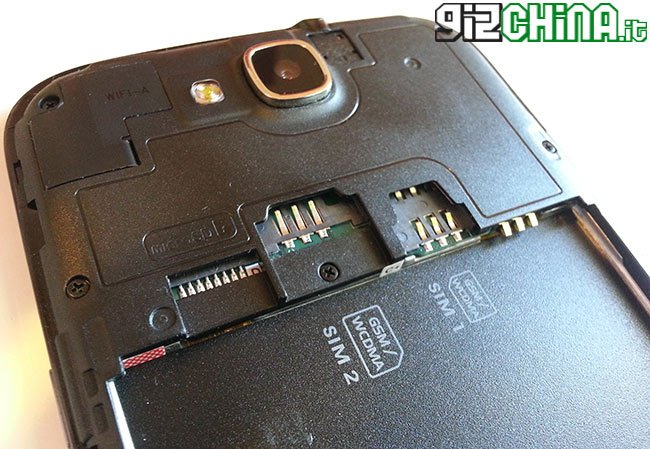 Both SIM (a normal SIM and a microSIM) can be used, alternatively, in 3G. Surfing the internet in HSPA + is always very fluid, but obviously it is sometimes affected by the poor quality of national mobile networks. I tested the connectivity of the same SIM with the Zopo Zp990 and with a Samsung Galaxy Note 2 not detecting differences of note.

The GPS of Zopo Zp990, after downloading the GPS EPO assistance data and with A-GPS active is very fast in the fix. I ran the fix directly in the Engineer menu, accessible via the app mobileuncle tools. The first fix is ​​quite slow, the next ones very fast. 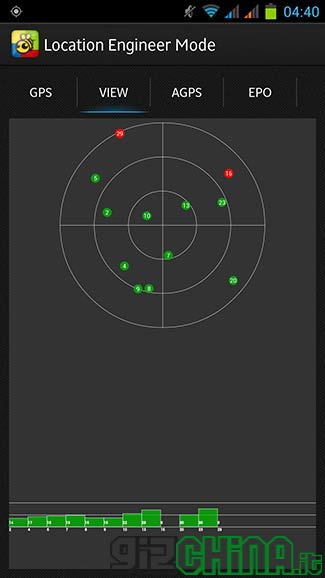 I tested WiFi reception by running tests at the distance from the 2 meter, 5 meters and 7 meters in a different room (separated from the router by a wall very often). I have not detected problems with signal loss. These are the results.

The Zopo ZP990 bluethoot works in the standard. As for the other devices I tested it with the device installed in my car.

The Zopo Zp990 rear camera has a mega-pixel 13 sensor. The photos taken during the day are very sharp and detailed. 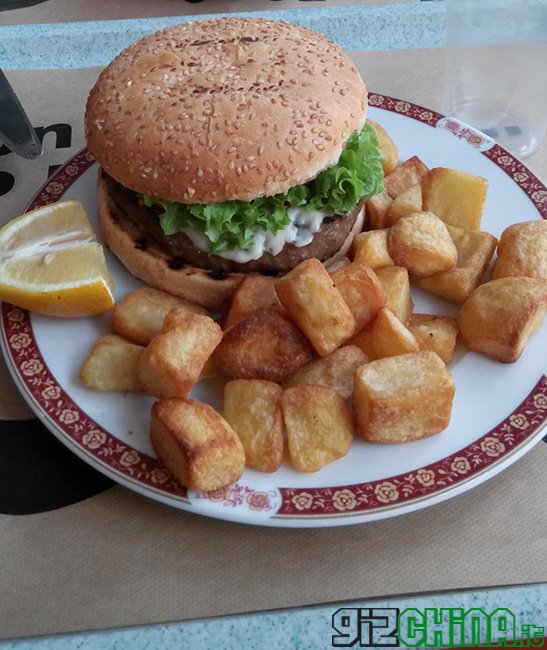 In this case, in addition to the photo, the subject was also very "good"! 😉 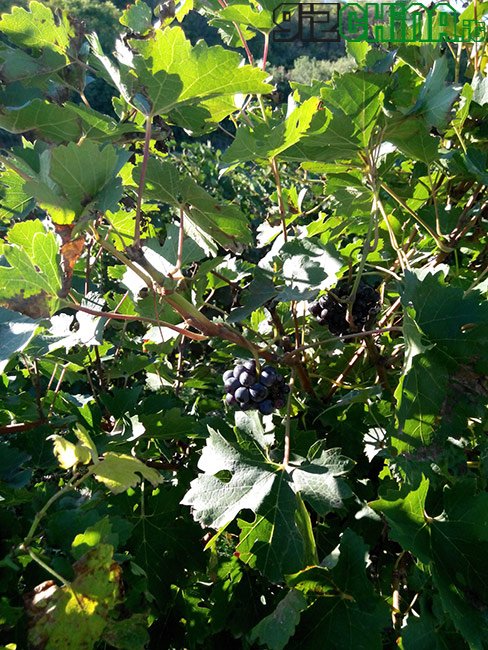 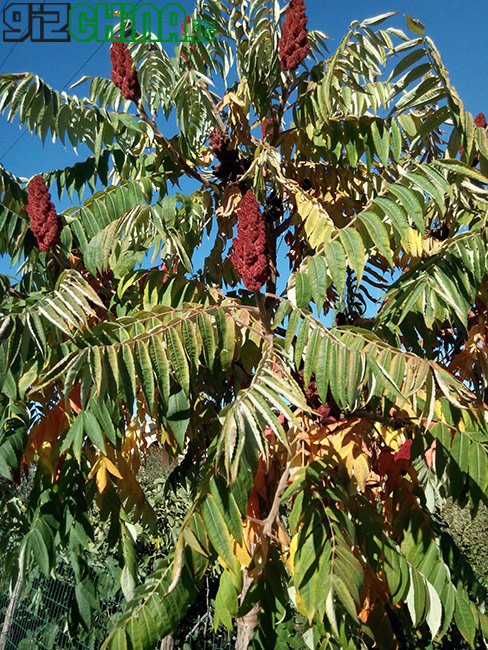 Photos in low light conditions are fair. Who has already read the review of the Pantech Vega A880S LTE-A you will probably have the impression that you have already seen one of the two photos. Your impression is correct! I tried to reproduce the "same" photo just to give you the chance to compare the quality of the two cameras.

The photo is not identical, but you can still see the good quality of both shots, obviously given the very low light conditions. Which one do you prefer?

Even at night, in "deep dark" conditions, the LED flash reacts quite well. However, even the Zopo Zp990 is definitely not the best device for taking night shots. We will try to improve its performance with the next ones GizRom.
Here is a shot: 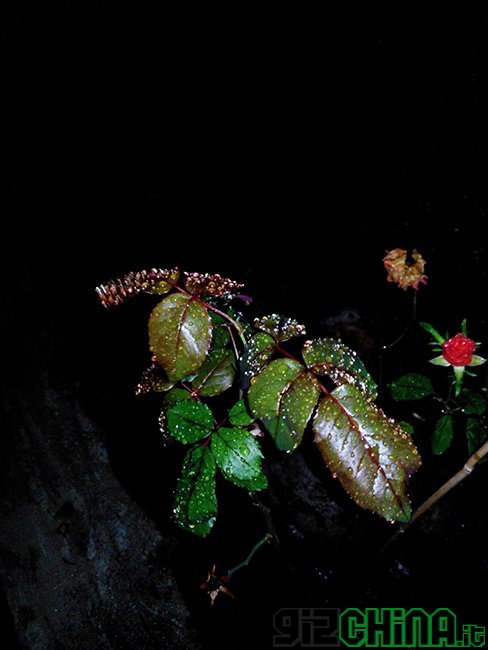 Good video recording. In the video you can see some small "shots" here and there. The focus is excellent, especially if you consider that I made the video (intentionally) almost against light. 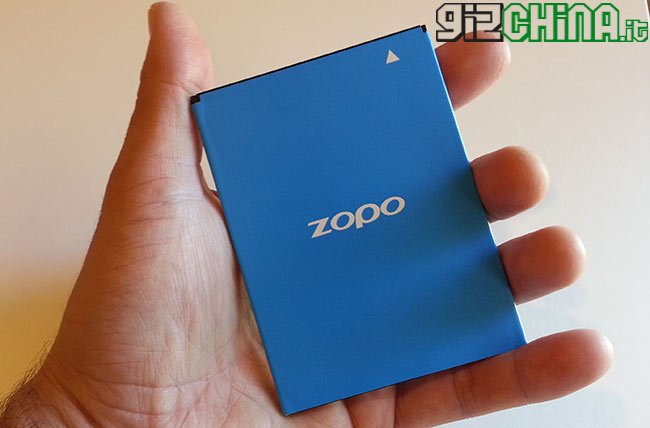 The battery life is what most struck me positively. The 3000mAh can safely carry the Zopo Zp990 until late evening, even with heavy use of the device.

Again in this case, I underline what I mean for intense use:

With such intense use I arrived at the "after dinner" (around 22: 00) with a residual autonomy of around 15%.

The Zopo with the ZP990 phablet has really done a great job! Of course, there is still a lot of work to be done in order to be able to definitively affirm itself among the "big ones", but the road taken by the company is the right one.

The quality of the materials of the Zopo Zp990 C7 Captain S phablet is something that is very easy to perceive in use and that brings this device closer to the other devices of the most famous brands.

The FULLHD 6 inch display is really fantastic. Excellent for those with work, reading and gaming needs. However, do not think about being able to write an SMS with one hand! 🙂

The aspects on which, in my opinion, Zopo still has to work on the quality of the LED flash (currently good, but improvable) and the creation of a customized software support. It would be nice to see some Zopo custom ROMs, as well as, for example, the famous Samsung Touchwiz, that is what becomes a real trademark, an element of brand recognition.

finally, a further thanks to ZOPO ITALY for giving us the opportunity to review this wonderful ZP990 C7 Captain S phablet and, again, for offering our readers an exclusive discount, usable through the voucher GIZOPOIT5!