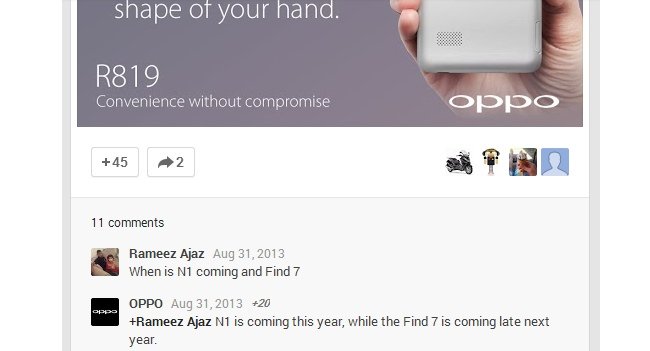 A fan of Oppo, or Oppo-fan as they prefer to be called, has publicly asked, on Oppo's official Google+ page, when the two devices, N1 and Find7, were officially launched. Normally questions like these would have been ignored, but this time Oppo answered.

Exponents of Oppo responded by saying that the N1 will be launched this year (although we actually know the official date, September 23) while for the Find 7 we will have to wait until the end of 2014.
Dell 'N1 we have heard and seen a lot, starting from motherboard up to the Snapdragon 800 processor, but the Find 7 still remains a mystery!
If you like this article and do not want to lose all our updates click "like" on our page FACEBOOK, Follow us on TWITTER e YOUTUBE , or add GizChina to your circles in GOOGLE +.