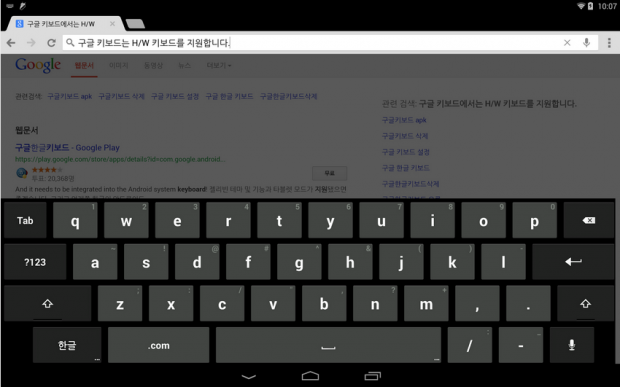 Android 4.4 KiKat is probably coming! It is indeed leaked a first screenshot of the probable new google keyboard!

The latest update of the Google keyboard for the Korean has opened the flaw on the new release of Android. In fact, the following screenshot has been published on the Play Store just as "attached" to the "language update" of the Android keyboard.

The icons on the notification bar, in fact, are light gray, while the USB Debugging icon is completely different from the stock one of Android 4.3 Jelly Bean!

In this comparative image it is possible to note the differences more. The USB Debugging icon, as we said, is completely different: a "Jelly Bean" (gummy candy), in fact, for the 4.3 version, and a slice of cake for the 4.4 version.
The latter, in fact, will be the new version of Android "Key Lime Pie" which, given the Google agreement with Nestlé, will be called KitKat.

Further differences can be seen in the color and position of the battery and WiFi icons, in light gray and more shifted to the left. We do not know if this screenshot is recent or dating back to when, before the partnership with Nestlé, the new Android release was to be called "Key Lime Pie", but we will find out a lot with the official presentation of Android 4.4 KitKat!
If you like this article and do not want to lose all our updates click "like" on our page FACEBOOK, Follow us on TWITTER e YOUTUBE , or add GizChina to your circles in GOOGLE +.