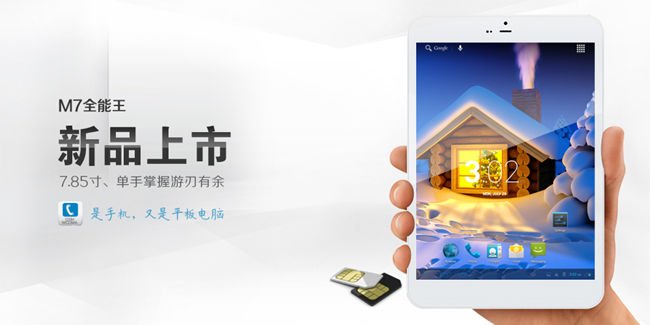 Last month we talked about it TOP 10 Chinese alternatives to the iPad Mini, describing the best tablets produced in China that, in terms of size and construction lines, recall the Apple device.

During this last month, other interesting iPad Mini-style tablets were launched on the market, again at very affordable prices, but hardly with 3G support. It is not the case of the Owen M7, a device with lines almost identical to the "small" tablet of Apple, which can support both access to the Internet through 3G and voice calls.

This new tablet, in fact, in a thickness of only 7,8 millimeter contains all the features of a phone and this thanks to the quad-core Mediatek MT8389 from 1.2 GHz that includes, in fact, support for WiFi, 3G and GPS!

The Owen M7 is also equipped with a 7,85-inch IPS display with a resolution of 1024 x 768 pixels, 1GB of RAM, PowerVR SGX544MP GPU, 5 mega-pixel rear camera and 2 and 8GB front-facing memory for the version on sale for about 120 euros! A really bargain price for a device with these features and specifications!

Do you like this new iPad Mini style tablet?