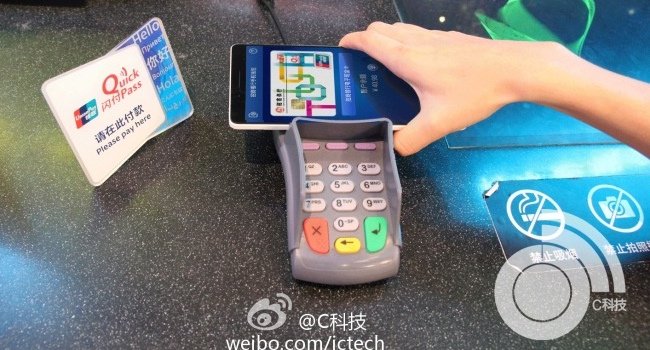 The upcoming Oppo terminal on the market, the N1, was photographed during the operation test for payment with NFC technology.

Indeed, one of the features that most distinguishes the Oppo N1 is its internal NFC chip. NFC, or Near Field Communication, (literally, "Proximity Communication") although it is far from being considered an innovative technology in the field of smartphones, however, it is only this year that the manufacturers are highlighting its function.
The possibilities of the NFC system include the transfer of data and files between devices, the use of NFC tags, the synchronization of devices that support your terminal and how you can also see the payment of some goods and services.
This spy photo shows the Oppo N1 paying for goods through the “China Union Pays Quick Pass” system; systems similar to this are present all over the world and it is therefore likely that the N1 will support those too.

Features of the Oppo N1

As well as NFC, the N1's other purported specs would include a 5,5-inch Full-HD display with 1920 x 1080 resolution, Snapdragon 800 processor, 2GB of RAM, rear camera with 16 mega Oppo N-Lens. pixels, large battery, a rear touch panel and finally the possibility of choosing between 3 different ROMs at startup.

Oppo will launch the N1 by the end of September.